Companies have started embracing the containerized approach. While they all used to have a massive monolithic architecture with thousands of lines of code that grew into a humongous, slow-moving, hard to manage thing, and this is where the problems started. The DevOps experts, developers, and architects are now coming to the opinion that a microservices architecture is the right approach for DevOps. The trend started from containerization to microservices to Docker to now; it is Kubernetes time.

Everyone is talking about Kubernetes, hmmm. What makes it so unique and popular? Well, several reasons make it popular among enterprises and developers. Kubernetes is the world’s most popular and has become a defacto tool for container orchestration. It rose to dominance because of its features, the community, offerings in the cloud, etc.

Today, we will discuss why and how Kubernetes came into existence and the architectural aspects.

Google was a fan of containerization from the beginning.

Google started with the Borg, a small scale internal project in 2003-2004. The goal of the project was to provide a tool-set for cluster management at Google. At times, the Borg system used to run thousands of jobs and thousands of applications within Google.

The same infrastructure is also used to deliver the initial version of Google Cloud platform. However, services like Google Compute Engine were found that that effiricent and what was missing from the puzzle was a great container management system. Sometime in 2014, Google introduced Kubernetes that was an open-source version of Borg. Then the Kubernetes community grew rapidly. Soon, big companies like Microsoft, RedHat, IBM, and Docker became part of this community.

After its open-source release, Kubernetes started competing with many other prominent container-management systems. It started competing with Docker Swarm and Apache Mesos, but we all know, Kubernetes is now the clear winner when compared to any of its competitors. One of the reasons Kubernetes surged past its competitors is the magic of community and support behind it: Kubernetes is one of the largest open source communities (more than 27,000+ stars on GitHub); It has contributions from thousands of prominent organizations (1,409 contributors); and is part of the open-source foundation, the Cloud Native Computing Foundation (CNCF).

Originally created by Google, and later donated proudly to the Cloud Native Computing Foundation, Kubernetes is an open-source container orchestration platform that can easily and automatically scale, distribute, and handle faults on containers. Kubernetes is extensively used in production environments to handle Docker containers.

The idea of containerization and Docker containers draw a great attention and many companies started embracing these new technologies. There was a need in the market for such a tool/platform which can hndle (control) and automate these containers when the number of containers grew. That is where Kubernetes comes into the play and acquired the market completely. 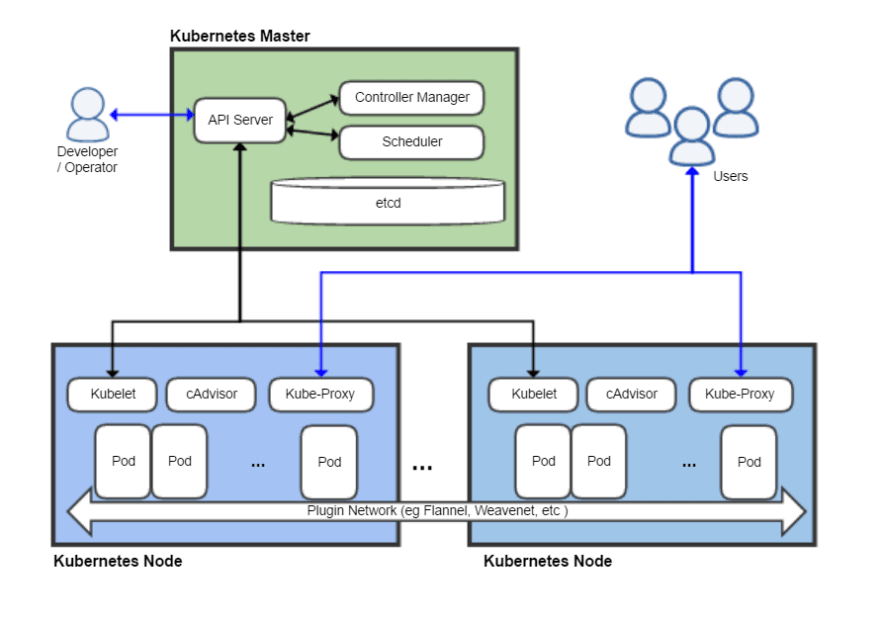 Kubernetes is here to stay as most of the organizations are embracing the DevOps path, and Microservices approach, it becomes a necessity to adopt containerization and hence Kubernetes to manage and execute the digital transformation in all these organizations. Knowing how Kubernetes works has become a must required skillset for developers today who like to build their career in DevOps and also, these are the people who are paid heavily in the companies.

If you like to learn Kubernetes, take this 'Kubernetes for beginners' course or 'Kubernetes from beginner to expert' course.