I had an idea that it'd be cool to create storyboards using simple text:

In this article, I'll share with you my thought and build process of this project.

And surely I'll show you the final result!

I've started with visualizing the idea. First pen & paper, then draw.io (you can see one of the first concepts above), then writing a generic overview:

With the idea and language more-or-less defined it was time to draft the development plan:

NOTE: For brevity reasons, I wont mention many dead-end ideas or stupid mistakes: so if you'll get a feeling that everything goes too smooth — thats only because of the editing. Also, I will cut a lot of code and use pseudocode-ish style to shorten the sources. If you'll have any questions — please, don't hesitate to ask!

I'll need a git repository to organize my dev process and a framework to speed it up. I used create-react-app and git init:

Important thought: We need to test our ideas fast! And it doesn't really matter which language, framework, or VCS you use, as soon as you're comfortable and productive with it.

I started with defining a simple JSON to test out if I can render images based on this structure.

The JSON should describe:

For the actors I've defined three preset sprites: tree, woman and man and added relevant images to the project.

And for drawing entry sprites we'll surely use canvas:

Canvas can export it's contents as a dataURL or a blob — we'll need this to generate .gif later!

^ In reality, the code is a bit more asynchronous: toBlob is async and all the images should be downloaded before ctx.drawImage, I used a Promise chain to handle this.

At this point I have proved that the images can be rendered as intended:

So we can move on:

This required some research on available libraries. I've ended up with gif.js. Alas, it hasn't been updated for about a year atm, but it did it's job quite fine (demo).

To generate a .gif file — we need to feed every image to the gif.js generator and then call render() on it:

Awesome, now we can generate and download the .gif:

I wanted users to type in commands in simple English. And this was the hard part for me, as I didn't even know where to start:

Luckily, after searching around I came across this article "Writing a DSL parser using PegJS" that introduced me to PEG.js (@barryosull , thank you).

PEG.js is a simple-to-use parser builder:

For example, here is an excerpt from my rules that parses Scenes:

These rules will parse this text:

In a couple of hours playing with PEG.js online version I ended up with a language and output structure I was fine to work with.

And after plugging it into the app I got this:

SIDE NOTE 2: also, I couldn't keep re-generating GIF on every text update. It was too heavy. 100ms-UI-thread-blocking-on-every-keystroke heavy.

RxJS 😍 came to the rescue! debounce for input text updates and a simple timer, mapped to frame switch imgRef.current.src = next_frame to imitate the animation.

Actual .gif will be generated only when user hits the "download" button!

This pet-project already took me a weekend of development, so I had to drop all backend-related tasks and stick with static web-app for now.

I used GitHub Pages feature to deploy and share the project.

GitHub Pages will serve your website under their domain http://username.github.io/repository. Since I might be adding a backend later — I needed to buy a domain so that all links I share now would still be valid in the future.

Picking names is always hard for me. After an hour struggling I ended up with: 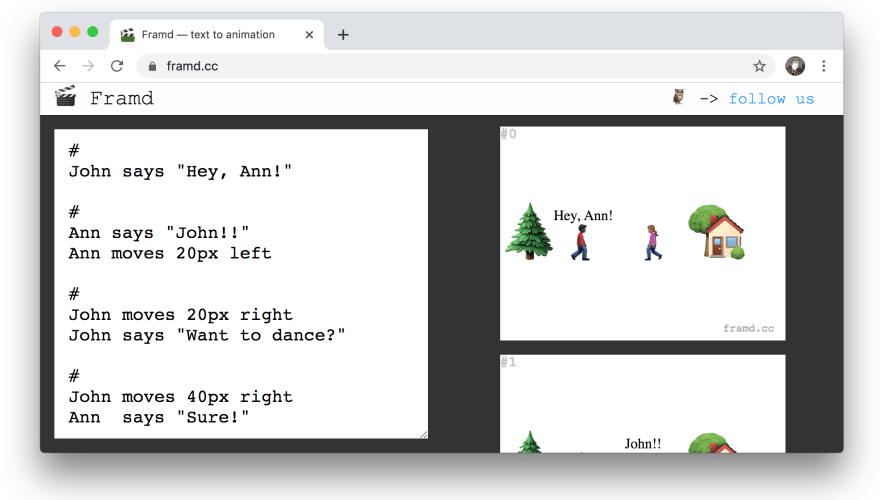 Plot twist: After deploying and sharing project with friends — I've found that I'm short on sprites! Turns out people can't tell a lot of stories using just man, woman, and a tree image. So I decided to use emoji as sprites 👻 . And now you have a ton of these 🌳👩‍🚀🌍 to tell your story right!

That's it! Thank you for reading this! 🙏

Have any questions? Post em in the comments section, I'll be glad to answer!

If you enjoyed reading — please, consider giving this article and this tweet a ❤️

It helps a lot!

Once suspended, kosich will not be able to comment or publish posts until their suspension is removed.

Once unsuspended, kosich will be able to comment and publish posts again.

Once unpublished, all posts by kosich will become hidden and only accessible to themselves.

If kosich is not suspended, they can still re-publish their posts from their dashboard.

Once unpublished, this post will become invisible to the public and only accessible to Kostia Palchyk.

Thanks for keeping DEV Community 👩‍💻👨‍💻 safe. Here is what you can do to flag kosich:

Unflagging kosich will restore default visibility to their posts.