This article aims to discuss code sharing between Android and iOS using Kotlin Multiplatform. You may or may not have the knowledge of Android and iOS development but having them would help you grasp the topic.

Android and iOS apps are usually the same when it boils down to their functionalities yet we still end up writing them both in different languages and tools just so we can have it on one platform and the other. To address these problems, we have different cross-platform technologies such as React Native and Flutter, two of the most notable cross-platform frameworks as of this writing. One not-so-new kid on the block has been gaining traction.

The existing frameworks are good. There's no doubt that it can do its job however, it would require you to rewrite all of your existing code and move on to their world. This would require you to re-train your engineers to get them accustomed to the new framework. Also, the new framework is just a bridge to the native world. They just do the work for you. If you want to do something at the native level, you won't be able to because you're tied to what their framework can give. This is where Kotlin Multiplatform would come in.

Kotlin Multiplatform is Jetbrain's take on the cross-platform world. Instead of moving into another framework, you just have to share what you need to share and stay true to the platforms that you're building on. Your engineers are still on their tech stack. They would need to learn a bit but they wouldn't have to learn something from the ground up. You can share your networking logic, caching logic, business logic, and application logic according to your needs. Some just share the networking layer. You can configure it depending on your use case but in this article, we'll cover how we can share all of those. 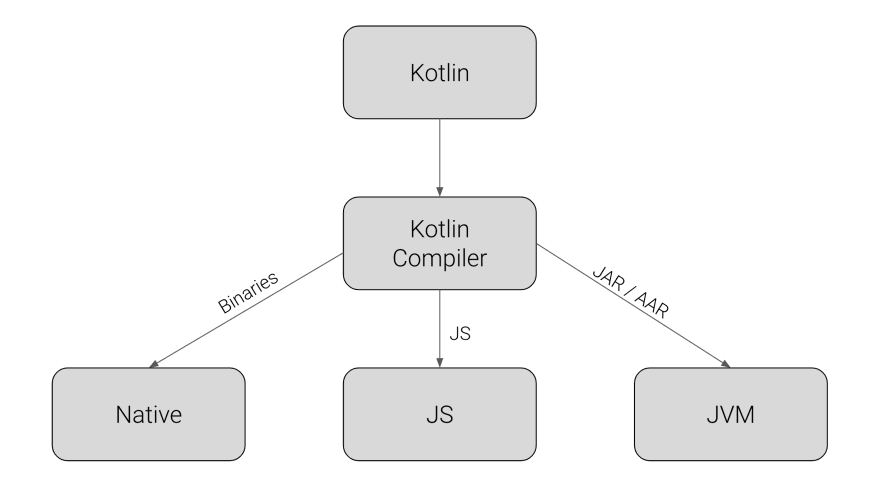 Kotlin compiles to different targets which allows it to be compiled as different outputs for each platform.

Kotlin/JVM outputs JAR/AAR files which allow it to be used by Java Projects such as Android and Spring Boot.

Kotlin/JS would generate JS files from Kotlin which you can use in other JS files. This allows Kotlin to be used on frameworks like React and Node.

Kotlin/Native would then output binaries which allows it to be used by native platforms. It can output Apple frameworks which opens its usage to Apple targets like iOS and macOS or executables for other native targets like Windows and Linux.

WIth Kotlin being compiled to these targets, we can write our Kotlin code once and Kotlin would compile that code to the specific target that you need and generate the correct output to be used on that target. 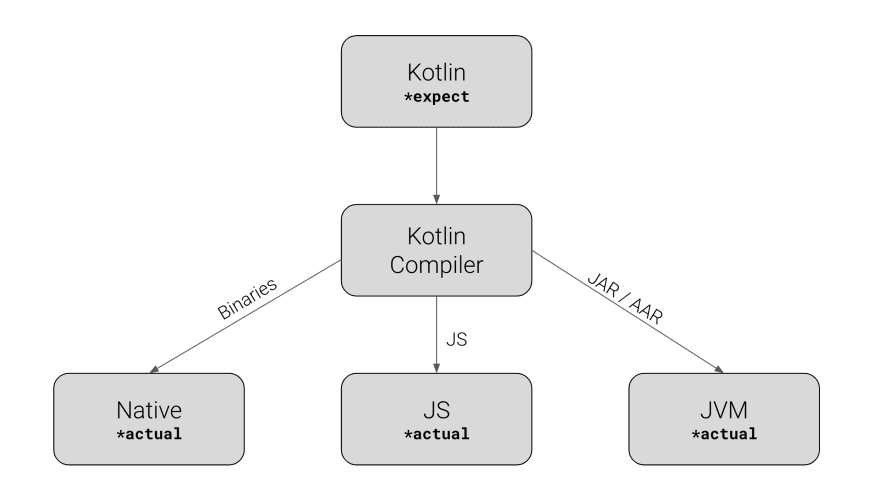 Most of the time, you would just write code and let Kotlin compile it to the target you want but what if there's something that Kotlin doesn't know? Let's say you want to store some value on your app. On Android, you can do this using SharedPreferences and on iOS, there's NSUserDefaults. By default, Kotlin doesn't know this. It only knows how to compile Kotlin code into different targets but you can make Kotlin aware of this by using the expect/actual mechanism.

Now, you can just use saveValueLocally and Kotlin knows that it should use NSUserDefaults on iOS and SharedPreferences on Android.

You can do these to anything that would have a difference in the platforms like Date. 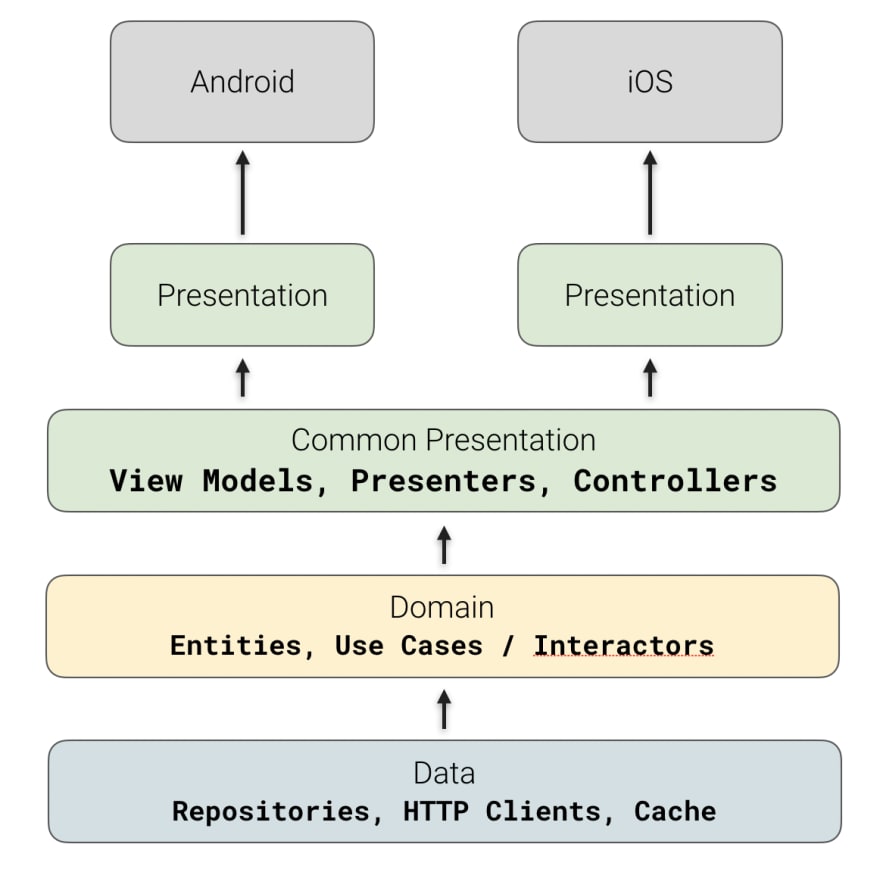 To maximize code sharing between Android and iOS, we share everything that we can. These include the data layer for networking and caching, domain layer for our business logic, and part of the presentation layer which would contain our application logic. Let’s leave the presentation layer different so it stays true to the platforms. This would be using Activity / Fragment on Android and ViewController on iOS. This is something we cannot share and is really different on the platforms.

The first thing we have to do is to set things up for code sharing. We create a Gradle module with any name (SharedCode for this sample) and we need to tell Kotlin its targets. Here’s a basic configuration for a shared code module:

The plugins block tells that this is an Android library and a Multiplatform project. This would allow us to configure both Multiplatform and Android.

Inside the kotlin block, we can specify our targets. Here we specified ios and android. This would create the targets that we can configure further.

We can also add dependencies to the targets. In the snippet, we just added the Kotlin library. We added them to all the targets so that Kotlin knows how to compile it on each target.

Notice the android block. Here we just configured it to rename the default main to androidMain just so that the folder would be more meaningful.

This configuration will make the project have the following structure.

Now we can start writing code.

Sharing on the Data Layer

This layer would have anything that does with data. This is where we get or store data for our application. To make the article simple, we’ll just tackle getting data from a remote source.

Luckily, there’s already multiplatform libraries for networking so for this, we can just use Ktor as our HTTP Client, Kotlin serialization for JSON Parsing, and Kotlin Coroutines for handling asynchronous tasks. Do read about them to get more familiar with the libraries.

First, we need to add the dependencies in our Gradle configuration.

Just a few more setup, we need to specify the HttpClientEngine for each platform

Now, we can create an ItemRepository which would use Ktor to perform a network request to get some data.

The client variable initializes the HttpClient based on the engine to be used (Android/iOS). Here we also initialize it to be able to parse JSON using the KotlinxSerializer and we register the serializer for our Item (You’ll see item later on). This tells Ktor how to parse an Item from a JSON string.

After having that setup, we can just use the client and perform requests through it. client.get, client.post, etc…

And there we have it. Shared networking code. We can use this already on both Android and iOS.

Sharing on the Domain Layer

Here we put the business logic in our app. For this sample, what we can put here is our entity model.

Here we just share the data model for the entity. Also, note the @Serializable annotation. This enables the class to be serialized/deserialized to/from JSON.

Sharing on the Presentation Layer

Now, this is where we control the application logic. What gets presented and what we do on user inputs/interactions. We can share the ViewModels here.

To start, we can create a BaseViewModel that would use Architecture Components on Android and just a vanilla ViewModel on iOS.

Android already has utilities built through Architecture Components so we leverage using them. iOS doesn't though so we have to create them. Luckily, it's not that much.

For the BaseViewModel to be able to propagate data changes to the view, we can use coroutine's Flow.

Suspending functions aren't compiled to ObjC so we can't use those on iOS but thanks to CFlow from KotlinConf, we are able to do so. See this for the source code.

Basically, CFlow just wraps Flow and exposes a regular watch function so we can observe them and pass a lambda as compared to using a suspending function with Flow. There are also helper functions to convert a Flow and ConflatedBroadcastChannel to CFlow. Go ahead and get the FlowUtils.kt file and add it to your project.

watch uses generics and to enable the generics in swift code, we have to put some configuration.

With those utilities, we can start making the feature View Models.
Suppose we want to view a list of items.

We've also added a create helper function to create a ViewModel. ThreadLocal is something to help with Kotlin/Native's concurrency model. It's a fundamental topic on K/N and I highly recommend reading Kevin Galligan's materials on it.

And now, we have a shared view model. What's left for us is to consume this in our Android and iOS projects.

Using the shared code in Android

Luckily, using the shared code in Android is pretty easy since it's also a Gradle project. Just add it as a dependency in the Android project's Gradle configuration and you're good to go.

Add that and we can use it in a Fragment

If you've checked the CFlow code, watch returns a Closeable. It's something for you to clear later on to prevent a memory leak. Much like RxJava's Disposable. You can hold a reference to each of them and close them later or maybe create something to help you with it

Using the shared code in iOS

For iOS, there's going to be more work. We need to generate a framework as its output and consume that on Xcode.

To make our lives easier, we'll be using cocoapods to handle the setup for us. In the SharedCode module's Gradle configuration:

Adding this configuration would add the podspec task which would generate a podspec file you can reference in your iOS project. To use cocoapods in iOS, you can follow this.

Run the podspec task via ./gradlew SharedCode:podspec to get the file.

In the iOS project, you can use this reference the podspec file through the following:

This would hook the configurations so you can use the SharedCode in iOS. This would just generate the framework and reference that but all the work is being done by cocoapods.

After that's done, we can now just import it in a ViewController

Voila! You just used the SharedCode in Android and iOS.

Here's a visual summary on what we just did: 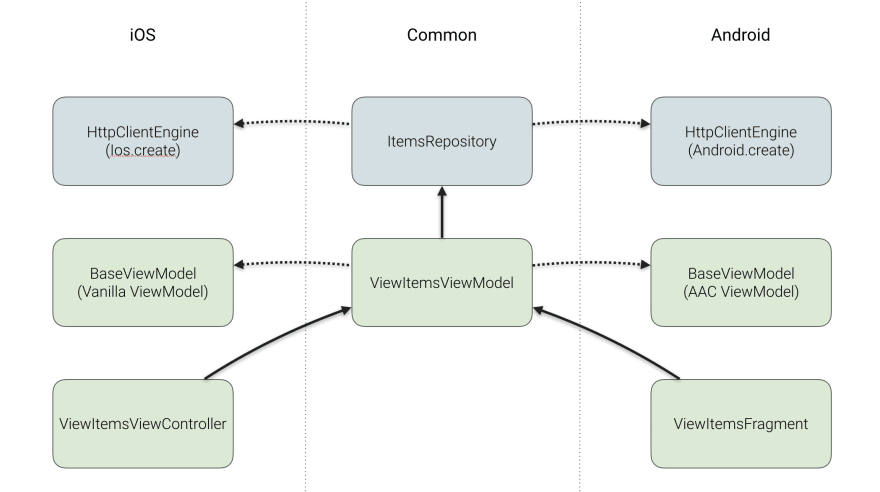 We used Kotlin Multiplatform to be able to share code across Android and iOS. We also used multiplatform libraries such as Ktor for networking,
Serialization for JSON Parsing, and Coroutines for asynchronous tasks.

Kotlin Multiplatform is very promising and with Kotlin 1.4 coming, there's more to see to this technology.

For a more concrete example, you can check out this sample project on showing a list of jokes.

That's it! This has been what came out on my journey in Kotlin Multiplatform. I hope someone gets something out of this or maybe make someone try it out.

Thanks for reading! I hope you enjoyed!

How to Creating a Social Media App Super Simple

Once suspended, kuuurt will not be able to comment or publish posts until their suspension is removed.

Once unsuspended, kuuurt will be able to comment and publish posts again.

Once unpublished, all posts by kuuurt will become hidden and only accessible to themselves.

If kuuurt is not suspended, they can still re-publish their posts from their dashboard.

Once unpublished, this post will become invisible to the public and only accessible to Kurt Renzo Acosta.

Thanks for keeping DEV Community 👩‍💻👨‍💻 safe. Here is what you can do to flag kuuurt:

Unflagging kuuurt will restore default visibility to their posts.