This post covers an introduction to react-native-performance monitor, a realtime performance monitor for React Native I've just made (which would also work for React). The tool is completely open-source, published on npm and can be checked out here.

1 - Don't jump straight in, get a benchmark!

This is probably the most important point, and above all, is the main motivator for this tool.

Although it's very tempting to jump in and chop away at ugly lines of code, without a real measurement of a before and after a lot of the times you're pretty much none the wiser how big of an impact you made (the odd change here and there may even introduce a performance deficit)

2 - Make sure there's a good cost-benefit

Simply put, if you've reduced the maintainability and readability of the code for a couple of milliseconds improvement, it's probably not worth it. To reiterate the first point, this is made a lot easier if you have numbers to back this up, don't introduce bias and the phrase "it feels faster".

You've reached a mind-melting conclusion that will improve your React Native knowledge forever, great! Record your finding and document them / share it with your team.

Without a good way to test performance again at a later date, you could find that your hard work is ruined by regression.

As of React Native 0.61.0, the React Profiler is now officially stable. Profiler component exposes the following callback as a prop:

This release allows you to also profile interactions much like you'd do in chrome on the web.

Although useful, I have a few problems with using this to test performance and iterate.

I get the best use out of this by using it to figure out a starting place of what to work on. But in my mind, I feel like making performance improvements needs a different tool, one that provides immediate, a/b comparison based feedback.

Considering the above I decided to get to work in making this tool. I've been using it for a few weeks and believe the best approach is to:

1 - Identify an area of the application you feel needs improving (maybe via the React Profiler).
2 - Record your baseline by either triggering a component mount or force update, I added x5 and x10 buttons to get a better average baseline. Whether you choose to test remounting or force updates depends on the nature of what you are trying to test, if your component receives frequent updates somewhere in the tree you may see a lot of benefits just concentrating solely on updates.
3 - Whilst you are developing pause the recorder, then when you want to out your changes add a variant and click resume.
4 - Repeat 3 as many times as you need to to reach an improvement, to reduce the noise you can always clear tests that you wish to discard.

I thought I knew React Native inside and out having worked on it since 2015, but seeing metrics for every little change opens up a rabbit hole of things you thought you knew. It's strangely addicting to play around with.

The amount of subtle changes with components and their impact has surprised me, for example: 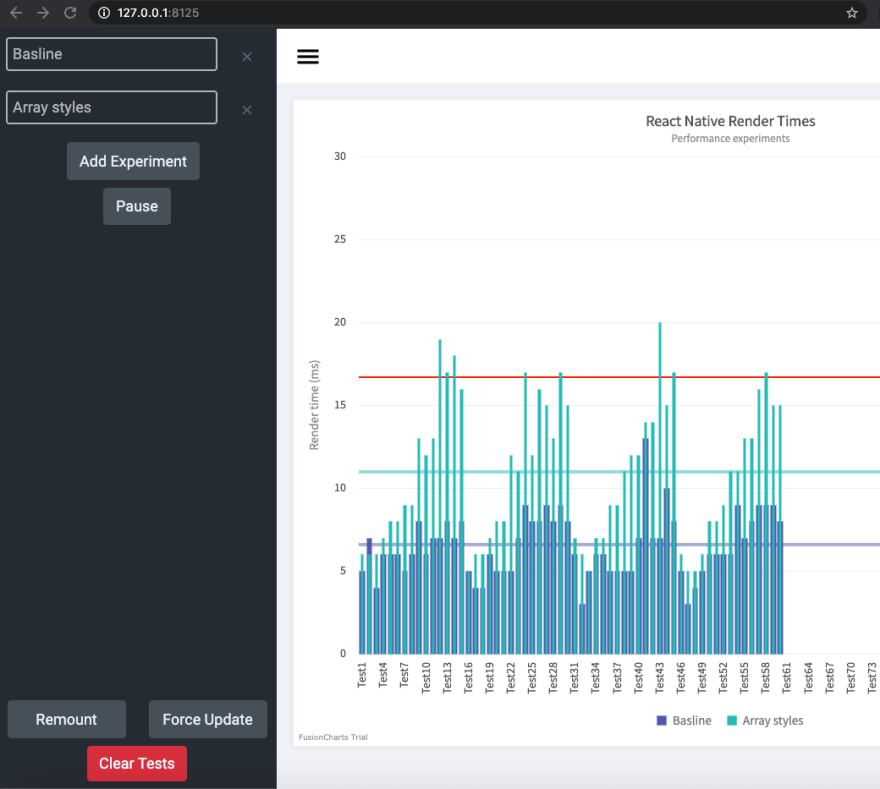 This difference was entirely down to the following code. I, of course, could understand why this would be the case however I'd not predicted the effect this change would have.

The overall implementation is quite straight forward and simply involved passing the onRenderCallback values via a WebSocket server to finally render them in a fancy graph.

There are 3 main components:

The following diagram is a brief explanation of the data flow:

Hopefully this has encouraged you to also jump into the rabbit hole of optimising your app. This project is still in its infancy but I'm open for feedback and how it could further help everyone out. Check it out and let me know!