Deno is right now not production-ready. As of writing this post, it is in version 1.0.0-rc2. Does this mean we should ignore it? No, we should start to learn it right now because it will maybe take 1 or 2 years but if nothing tragic will happen then it will replace Node or at least will be as popular as Node.

I'm not bashing Node here. I love Node and I think it helped so many people but at times it can also be slow to evolve. Like adding module support and adopting ECMAScript(javascript) standards.

Also, NPM can be a mess but to be fair dependency management, in general, is not easy. Also tooling around node can be hard to setup. Like webpack or eslint/prettier. I'm always using some kind of boilerplate that does not work anymore because of so many updates. Okay, enough about Node/Npm.

A secure runtime for JavaScript and TypeScript
Okay, so what we know is that we can run Javascript and Typescript on bare metal.

Dinging a little bit more into the documentation we can find the following information.
One of them being Deno is secure by default. But what does that mean?
By default Deno runs in a sandbox without any access to the system. Actually you have to specify what your Deno project can access and whatnot. This alone is amazing. So if some dependency wants to access your filesystem which it should not it simply can't.

Node is written in C++ which at the time it was developt was the best choice. Since then we go some easier and secure languages like Rust. This is why Deno is written in Rust. Rust is an amazing language that also supports Webassambly. It is also secure by default.

Some other cool things are that Deno comes with Typescript support ot of the box, It can be bundled into a single file and has a build-in test and code format solution. It also has a built-in package manager. So to start quickly or just to try some things you don't need much! just Deno.

Now you should have the deno command at your fingertips. In general, I would advise you to use a Unix-like OS. If you are using Windows then you can use WSL.
Also, you should have git installed and make.
You can clone the boilerplate code like this:

For this tutorial, I will use VS code and you should download the Deno VS Code Extension

If you open the project in VS Code you can see the following files: 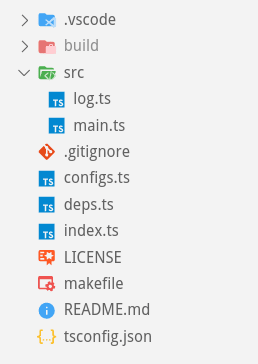 Let us try to understand the most important files.
The .vscode folder contains a settings.json file where we need to enable Deno.

The next file we should have a look at is the makefile.
You can see the following commands in the makefile:

For all these commands we don't need any extra tools or dependencies. It's all built-in Deno. I find this great and it makes your life as a developer so much easier. On thing I wish was in Deno by default would be a --watch flag that reruns your code once a file has changed.

Another interesting file is the deps.ts file. This is just a normal Typescript file but by convention, this file is where you organize your external modules/packages you are using.

This is the deps.ts. Think about it like your package.json.
It is a central place where you store your dependencies. One thing that will be interesting to see where development dependencies should go. I have seen people doing dev-deps.ts. I would prefer deps.<ENV>.ts. So for example deps.prod.ts, deps.dev.ts and so on.

The configs.ts for now is empty. I like dotenv files but we will see what wins in Deno.

then we have the index.ts. It is our entry point and as a web developer I like index but I would also have no problem to rename it.

The rest is pretty standard stuff.

What I want to add are tests and documentation. Both are built-in Deno and you need no extra tools.

Get started with Vite, React and Typescript in <1 min