This is one of the fundamental concepts while learning to work with Terraform. We will make use of this commit for the example we have been using in this Terraform series. Feel free to clone the repo and follow along.

What are Terraform states? 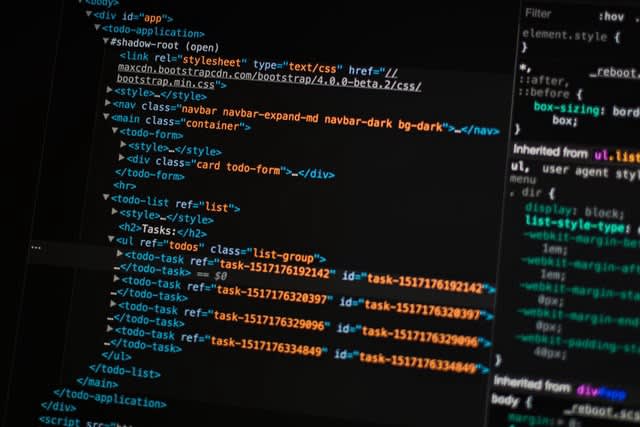 As we know till now, Terraform helps us manage cloud resources in the form of IaC and thus it benefits from several best practices used in software development. One of the benefits is version control — usually managed by Git which is also capable of remotely maintaining the repositories.

However, version control is not enough when it comes to infrastructure code development and management. In order to manage the infrastructure, Terraform needs to know how many real-world infrastructure assets exist. It needs to maintain a mapping of these real-world objects so that future operations can be carried out successfully.

Terraform maintains a database of mappings in the form of state files, either locally or remotely. This post focuses mostly on states — remote management of states will be covered in detail in a different post.

Why does Terraform need states?

Let us see the state files in action. Clone the example repository on your local disk and note the files. We can see we have 3 configuration files (main.tf, variables.tf and provider.tf), 1 README.md file, 1 .gitignore file and 1 .terraform.lock.hcl file. Currently, we don’t see any state file. Since this is a freshly cloned repository, initialize Terraform into its root directory.

Note the changes to the root directory again. Initialization has added a .terraform directory and it contains a file that is not human-readable. However, by the name of the file you can understand it is the plugin for aws, which was downloaded by Terraform during initialization. Still, nothing about states.

**Note: **It is assumed that the AWS IAM credentials are already configured using AWS CLI on the local system. Terraform uses the same credentials to work with AWS APIs.

Let us plan our resources. Run terraform plan and keep an eye on the files in the directory. While Terraform is planning the resources, a couple of files appear, and then they disappear when the terraform plan output is printed to the console. 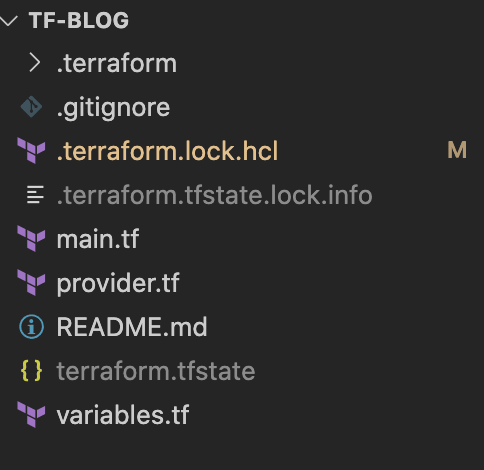 terraform.tfstate file is supposed to contain the state information, but since nothing has been applied, i.e. no real-world infrastructure is created, the state file is not saved during this planning. .terraform.tfstate.lock.info file - this has to do with the locking mechanism, which we will go through in a while.

Optionally, you can save the output of the terraform plan command by specifying -out parameter and use the same plan output while apply-ing.

Let us apply the configuration. Run terraform apply in the root directory.

Note that the same 2 files which we observed in the previous step are created and this time they did not disappear. This is because terraform apply has actually created resources and now the bindings are saved in terraform.tfstate.

It is very tempting to take a look at terraform.tfstate file as of now. But I would suggest to park the temptation for now and instead of taking a look at the state file, destroy the resources. Run terraform destroy.

Take a look at terraform.tfstate file and it should look something like above. This is a general Terraform state format which is a JSON object and has certain properties. Mainly it represents the version of state format, Terraform's version, serial, lineage, outputs, and resources.

Lineage is a code property provided by Terraform, it is a way to protect the configuration with the help of timestamps.

The most important sections for us right now are the outputs and resources. The reason why I call these sections and not just attributes is that they represent the major chunk of Terraform state and contain all the properties of the resources created.

Output, as the property name suggests, would contain all the output values requested in the configuration files (.tf). Resources are an array of resources created along with their properties.

Looking at the empty TF state file helps understand the contents more easily as a lot of information is skipped. Let us apply the changes and then observe the terraform.tfstate file and the backup file. Run terraform apply.

terraform.tf state file now contains the details of all the outputs we specified in the configuration files, and the resources section contains an array of instances we created using Terraform configuration. The backup file now stores the previous empty version of the state file. Take your time to go through the contents of both files.

State locks are not of much significance while working with Terraform locally since usually, only one person is responsible to write the configuration and execute it. However, things can get out of hand if multiple users are trying to run their changes simultaneously.

For this reason, Terraform makes use of a locking feature that disables modification of state files when terraform plan or apply is in progress. It is for this purpose we can observe the temporary existence of .terraform.tfstate.lock.infofile.

It becomes very important when a team collaborates on the same configuration using remote backends.

Note: Although Terraform states are stored in JSON format, which is very human-readable — it is still advised that manual changes should be avoided.

In such cases, it is possible to import existing resources in Terraform state by using terraform import command. Please note, state files should not be modified manually to include existing resources as there is a lot of scope of human errors and if the state gets corrupted, the path to recovering from resulting technical debt is long.

At this point, terraform is not very mature when it comes to importing resources. Currently, it can import the resource and update the state file, but cannot write the corresponding configuration by itself. However, it is expected that this feature would be available in future versions.

To successfully import the resource, we first need to write the target configuration into our existing configuration files and then run terraform import command. Let us see the same in action.

Currently, our example contains 3 AWS EC2 instances. Go ahead and create a 4th EC2 instance manually by logging into AWS management console. We will pretend that this VM exists from the past and Terraform doesn’t know about it and thus it will not be managed by Terraform.

Since we need to first write the configuration of this VM in Terraform file, I have added the below code to the main.tf file.

We are ready with the target configuration and the VM is running successfully. Now to get this VM under Terraform management, run the below command.

If successful, it should give the below output:

The resources that were imported are shown above. These resources are now in your Terraform state and will henceforth be managed by Terraform.

If you got this message, you have successfully imported this AWS EC2 instance within Terraform management. You can now destroy this VM by executing terraform destroy in the same terminal.

If we observe the state files, there is a lot of data about our EC2 instances printed in JSON format. This also includes sensitive data like private keys, IP addresses, etc. Similarly, various types of resources have sensitive data associated with them.

Sharing state files becomes a security threat in this case. It is always advised not to include state files into the version control repositories and it may expose sensitive data to whoever has access to this repository. If you look at the .gitignore file, we have already included the state file so that the state files are not synced with remote repositories publicly.

Workspaces are to state what branches are to code. As mentioned earlier in this post, version control systems to manage the code are not enough for working with Terraform IaC. We have learned quite some stuff about a state in previous sections. One question we may have is — if we do some code (config) changes, is there a way to test the same without disturbing the existing infrastructure? The answer is Workspace.

By default, Terraform works with the default workspace which is analogous to the main (master) branch of Git. Any changes to the configuration will reflect in the current set of real-world infrastructure. Meaning, even if the code change happens on a different branch of VCS, the same state would be affected. This can cause a lot of confusion and errors.

It makes sense to have a different “ workspace ", to reflect changes made on a different branch of IaC. Using workspaces, Terraform allows us to have a completely "new environment" with a new set of resources. Terraform uses the same configuration included in .tf file but uses a different workspace. This is great for testing the modifications made to configurations.

Let us use the same example to do some hands-on with workspaces.

In the root directory, identify the current workspace you are in by running the below command.

Let us create a new workspace:

To switch from one workspace to another use the below command:

Currently, we have 2 workspaces (default and myWs)

Inspect the state in both workspaces by running the below command:

Once terraform apply is successful, run terraform show again to check the current state in the default workspace. You should see 4 resources being created.

Checkout Select the other workspace — myWs and show the state of the same.

Verify in AWS management console that in all there are 8 EC2 instances created.

If we take a look at our directory structure, Terraform has created a new directory terraform.tfstate.d, and within the same, it has created myWs directory to store states associated with this workspace. Similarly, if you create more workspaces, states of all those workspaces will be stored in appropriate sub-directories. 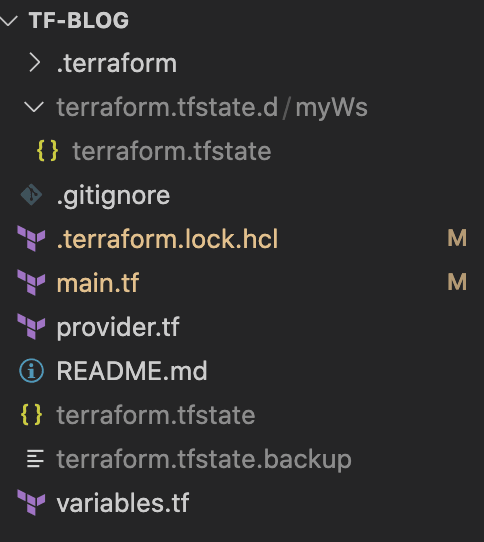 Thus workspaces provide a great way to test configuration changes, especially in complex projects. Before we wrap this up, do not forget to destroy resources in all the workspaces by running terraform destroy.

Note: Workspaces are a great way to isolated infrastructure tests, but it is not a good idea to treat workspaces as “different environments”. To understand this we need to have an understanding of modules and remote backends, which we would cover in upcoming posts.

Originally published at http://letsdotech.dev on January 10, 2021.

How to properly check the code?

Once suspended, letsdotech will not be able to comment or publish posts until their suspension is removed.

Once unsuspended, letsdotech will be able to comment and publish posts again.

Once unpublished, all posts by letsdotech will become hidden and only accessible to themselves.

If letsdotech is not suspended, they can still re-publish their posts from their dashboard.

Once unpublished, this post will become invisible to the public and only accessible to Let's Do Tech.

Thanks for keeping DEV Community 👩‍💻👨‍💻 safe. Here is what you can do to flag letsdotech:

Unflagging letsdotech will restore default visibility to their posts.