This article was written exclusively for the Dev Interrupted by Krzysztof Waraksa - an active and participating member of the Dev Interrupted Discord.
.
.
.
In a company with 100 employees, there can be over 10 individuals with some form of neurodiversity such as ADHD, Autism, Dyslexia, or others.

While neurodiversity exists on a spectrum of intensity for each person, it’s still a significant number of people that could easily not be able to be working to their full potential because of poor accommodations. And according to acas.org.uk, 1 in 7 adults are neurodivergent. So how can you help make your teams and offices friendlier and less hostile to these employees?

Hold open dialogs with your employees

“I’m the neuro-divergent individual at my work. ADHD and Anxiety disorder. After my concussion last year I now have vertigo. The big thing is overcoming the stigma and asking for what I need (and being honest with myself about what I can do). I’ve found my employer very accommodating. I would suggest that companies have open dialogs about it so employees are comfortable to come forward." — Discord member Jim MCKeeth

An open dialog with the employees of your company and teams regarding neurodiversity can indeed be a great help — Not just for anyone who is confirmed to be neurodivergent! Awareness makes it so that people can learn how to accept, understand, and work with people with neurodiversity.

Reducing stigma and myths regarding certain disorders such as ADHD, where one common belief is that adults cannot have it because of the mental image of ADHD only being present in young hyperactive children, is highly important! Knowing that your team members can understand how you function and how they can best approach you if you’re needed for something can prevent a lot of unnecessary distress and conflict.

As a simple example: Imagine that you have a colleague named Brian. Brian has problems switching tasks on a whim because of his ADHD. He needs to mentally prepare himself for each task and carefully convince his brain to focus on the task at hand.

Now imagine that you have an impromptu meeting, and Brian has to be there. The meeting is happening right now, so you go up to him and tell him to come to the meeting. Brian had no time to mentally prepare for a task-switch, and may be left frustrated and unfocused afterwards.

So what should you do instead?

Let’s say that Brian told the team that he has trouble suddenly switching tasks, and requested that you avoid making him have to do so unless absolutely necessary. Instead of having the meeting happen right at the moment that the majority agreed it would happen, you could agree to have it happen in 5 minutes, and give Brian a heads up.

5 minutes can already be enough time for Brian to be able to mentally prepare to switch tasks, as he can then finish up the segment he was working on and move onto the meeting instead.

Of course, Ideally, you’d have most of your meetings planned out a few hours before they happen instead, as that way you can prevent having to cause any potential issues in the first place.

I can personally say that being aware of the difficulties my colleagues can experience, and them knowing what difficulties I may have, has made our ability to work together much more smooth. It’s far too common for people to experience constant frustration because we’re expecting to be talking and working with neurotypical people, however by being considerate and understanding towards each other’s struggles, we can reduce friction and create a more positive experience for everybody involved.

“I had an employee a few years ago with PTSD from time in the Marines. We worked together to make sure that he had a place where he could work, and also to make sure that everyone knew how to understand him. He is a great guy, but could seem severe and prickly if you just looked at him, which tended to keep people away from him. Communication with those he worked with, and some really easy interventions on my part, helped him to have a very successful time with us. I remain friends with him today.” — Discord member Drdwilcox

While making the team aware of how to go about handling neurodivergence is one part of bringing a comfortable environment, it is equally important to give focused attention to the employee in question. Approaching them when they seem to be struggling, working together with them to see what could help them, and discovering what their needs are.

This is something that I wished had happened more throughout my own life, even before I knew of my own ADHD, because even if you don’t know that someone has it you can often notice that something is off when looking at how they’re performing. And usually, they’re underperforming!

Even if you know that none of your employees or colleagues have any disorders, it never hurts to check in with them when you can and make sure that nothing is holding them back. As a review study of burnout prevention programs states , 80% of all programs successfully reduced cases of burnout in individuals. Imagine how much help individualized support could provide! 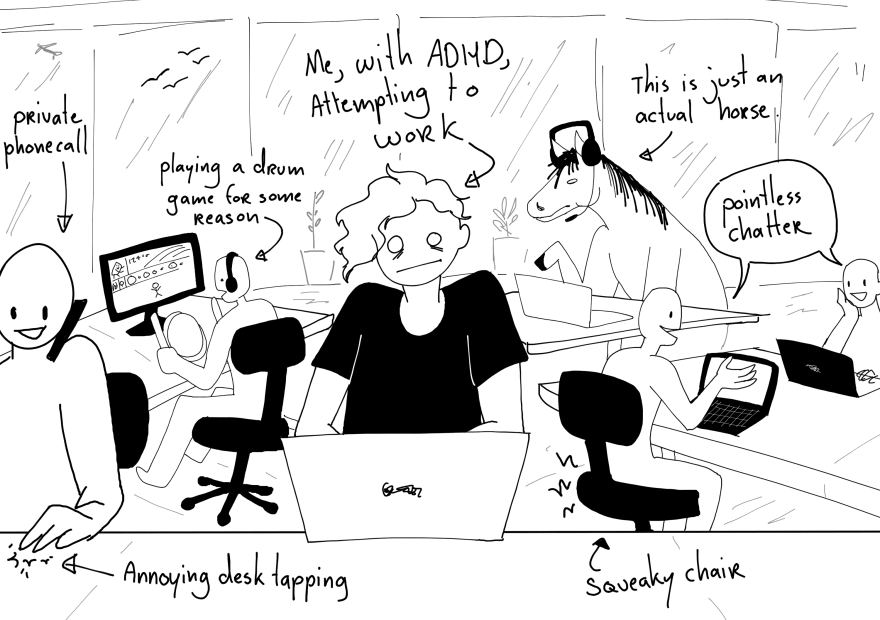 Many people can tolerate an open plan office that often comes with an array of little annoyances, some even actually quite like it for the social aspect. But they’re poison to people with ADHD, who already struggle with keeping themselves from being a distraction from their own work.

It doesn’t help trying to hold your developers accountable when there’s distracting noise being made. So what sort of accommodations for ADHD can you provide?

“I hate asking people to stop making noises. So I don’t, and when I can’t take it anymore it comes out in bad ways, like giving people dirty looks. Yes, we can talk to people, but then I’d be doing it all the time. And I might be the only one, so now I’m that guy who’s always bugging people. Why not just ask people to be considerate? Take off your headphones and put them on the desk. Can you hear any noise out of them? Then they’re loud and everyone else can hear them.” — Discord Member Scothannen

Confrontation can be a difficult thing to do for people that have disorders that affect their ability to socialize, such as individuals with autism. Having to constantly tell people to be quiet or to tone something down is a lot of work and can also strain relationships with coworkers who might just get annoyed- Especially if there was no agreement regarding noise in the office.

If possible, having a space where employees can move to that is meant to be total silence is one solution. A quiet room — similar to how some trains have silent cabins. If you want to be in an undisturbed area, you can go work there instead of the main area. This isn’t a realistic solution for every company though, some simply don’t have the space to do this or need high-powered workstations versus a portable laptop.

Providing noise-cancelling headphones is another solution, but that comes with the problem that people will come by to disturb you by tapping you on the shoulder instead. Perhaps having a simple “Do Not Disturb” card that is easily seen on the desk, where there is a mutual understanding to not go and tap the person on the shoulder. That way one can differentiate between a colleague that is alright with being disturbed while having their headphones on, and a colleague that really isn’t.

All in all, it all boils down to three words: Communicate, Support, Reduce. As long as you can actively communicate with your team about neurodivergence, and you actively offer support and look for feedback from neurodivergent individuals, you’re already taking several steps that many would never even consider. With time and experience you can then learn and work on how you can prevent any issues that your neurodivergent coworkers could end up dealing with, and while it may be impossible to completely eliminate a problem you can certainly reduce the stress.

Liked this topic? Have anything you’d like to add? Join our discussions in the Dev Interrupted Discord today!

Originally published at https://devinterrupted.com on July 21, 2021.

How to build a Grocery Application with Webflow CMS using DhiWise