We've known about Homograph attacks since the 1990s -- so you may be wondering why I'm writing about them in 2018. Don't worry, I'll get to that. In this post, we'll explore the history of homograph attacks, and why, like many of the internet’s problems that stem from path dependence, it seems like they just won’t ever go away.

Origins of my Interest

I first got interested in homograph attacks a few months back when I was working through tickets for Kickstarter's Hackerone program. HackerOne is a "bug bounty program", or, an invitation that hackers and security researchers find vulnerabilities in our site in exchange for money.

When I was looking through the tickets, one caught my attention. It wasn't a particularly high risk vulnerability, but I didn't understand a lot of words in the ticket, so of course I was interested. The hacker was concerned about Kickstarter's profile pages. (We often get reports about our profile and project pages.) 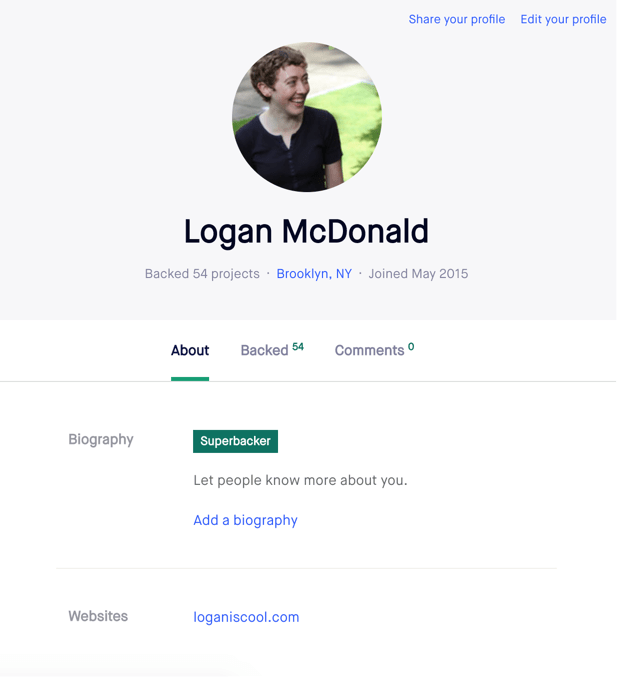 Profile pages often create vulnerabilities for websites. Whenever you are in the position to “host” someone on your site, you are going to have to think about the ways they’ll abuse that legitimacy you give them. Our hacker was specifically concerned about a field that allows our users to add user-urls or "websites" to their profile.

They thought this section could be used in a homograph attack. To which I was like, what the heck is a homograph attack? And that question lead me down a rabbit hole of international internet governance, handfuls of RFCs, and a decades-old debate about the global nature of the internet.

We have to start with ICANN, the main international internet body in charge in this story. ICANN makes all the rules about what can and cannot be a domain name (along with performing the technical maintenance of the DNS root zone registries and maintaining the namespaces of the Internet).

This is great. But I primarily speak English and I use ASCII for all my awesome businesses on the internet. What happens to all those other languages that can’t be expressed in a script compatible with ASCII?

ICANN attempted to answer this question when they proposed and implemented IDNs as a standard protocol for domain names in the late 90s. They wanted a more global internet so they opened up domains to a variety of unicode represented scripts.

What's a script? A script is a collection of letters/signs for a single system. For example, Latin is a script that supports many languages, whereas a script like Kanji is one of the scripts supporting the Japanese language. Scripts can support many languages, and languages can be made of multiple scripts. ICANN keeps tables of all unicode character it associates with any given script.

This is even better now! Through IDNs, ICANN has given us the ability to express internet communities across many scripts. However, there was one important requirement. ICANN’s Domain Name System, which performs a lookup service to translate user-friendly names into network addresses for locating Internet resources, is restricted in practice to the use of ASCII characters.

Thus ICANN turned to Punycode. Punycode is just puny unicode. Bootstring is the algorithm that translates names written in language-native scripts (unicode) into an ASCII text representation that is compatible with the Domain Name System (punycode).

For example, take this fictional domain name (because we still can't have emojis in gTLDs 😭):

If you put this in your browser, the real lookup against the Domain Name System would have to use the punycode equivalent:

So, problems solved. We have a way to use domain names in unicode scripts that represent the full global reach of the internet and can start handing out IDNs. Great! What could go wrong?

Well, things aren’t always as they seem. And this is where homographs and homoglyphs come in.

A homograph refers to multiple things that look or seem the same, but have different meanings. We have many of these in English, for example “lighter” could refer to the fire starter or the comparative adjective.

The problem when it comes to IDNs is that homoglyphs exist between scripts as well, with many of the Latin letters having copies in other scripts, like Greek or Cyrillic.

Example of lookalikes from homoglyphs.net: 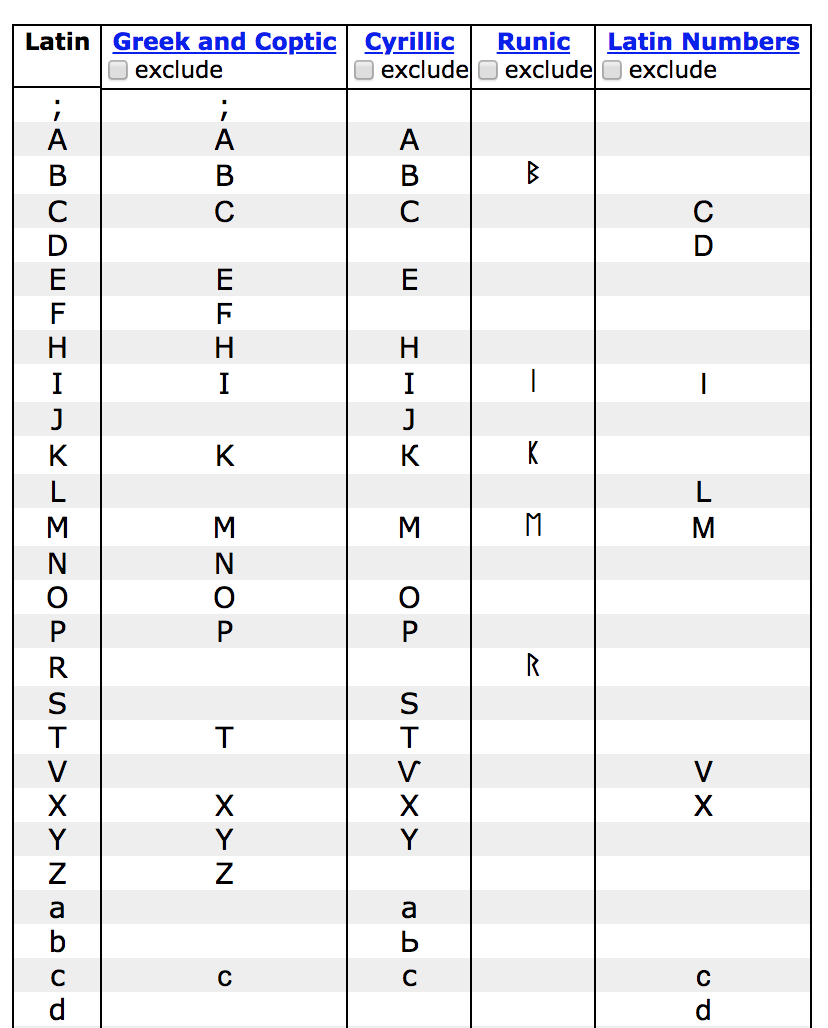 Let's look at an example of a domain name.

Can you tell the difference? Well, let's translate both of these to purely ASCII:

Uh oh, these definitely aren't the same. However, user-agents would make them appear the same in a browser, in order to make the punycode user-friendly. But in reality, the first "a" in the fake-WaPo is really a Cyrillic character. When translated to punycode we can see the ASCII remaining characters, "wshingtonpost" and then a key signifying the Cyrillic a, "w1k".

This presented ICANN with a big problem. You can clearly see how these may be used in phishing attacks when user-agents interpret both Washington Post's as homographs, making them look exactly same. So what was ICANN to do?

By 2005, ICANN had figured out a solution. They told gTLD registrars they had to restrict mix scripts. Every single registered domain had to have a "label" on it to indicate the single pure script that the domain name would use to support it's language. Today, if you went and tried to register our copy-cat Washington Post at xn--wshingtonpost-w1k.com, you would get an error. Note: There were a few exceptions made, however, for languages that need to be mixed script, like Japanese.

Problem fixed, right? Well, while mixed scripts are not allowed, pure scripts are still perfectly fine according to ICANN's guidelines. Thus, we still have a problem. What about pure scripts in Cyrillic or Greek alphabets that look like the Latin characters? How many of those could there be?

Well, when I was talking to my friend @frewsxcv about homograph attacks, he had the great idea to make a script to find susceptible urls for the attack. So I made a homograph attack detector that:

For example, here's my personal favorite. In both Firefox and Chrome, visit:

Pretty cool! In Firefox, it totally looks like the official PayPal in the address bar! However, in Chrome, it resolves to punycode. Why is that? 🤔

It is because Chrome and Mozilla use different Internationalized Domain Name Display Algorithms. Chrome's algorithm is much stricter and more complex than Mozilla's, and includes special logic to protect against homograph attacks. Chrome checks to see if the domain name is on a gTLD and all the letters are confusable Cyrillic, then it shows punycode in the browser rather than the unicode characters. Chrome only changed this recently because of Xudong Zheng’s 2017 report using www.xn--80ak6aa92e.com as a POC.

Firefox, on the other hand, still shows the full URL in its intended script, even if it's confusable with Latin characters. I want to point out that Firefox allows you to change your settings to always show punycode in the Browser, but if you often use sites that aren't ASCII domains, this can be pretty inaccessible.

So what, now, is our responsibility as application developers and maintainers if we think someone might use our site to phish people using a homograph? I can see a couple paths forward:

To summarize, this is a hard problem! That's why it's been around for two decades. And fundamentally what I find so interesting about the issues surfaced by this attack. I personally think ICANN did the right thing in allowing IDNs in various scripts. The internet should be more accessible to all.

I like Chrome's statement in support of their display algorithm, however, which nicely summarizes the tradeoffs as play:

We want to prevent confusion, while ensuring that users across languages have a great experience in Chrome. Displaying either punycode or a visible security warning on too wide of a set of URLs would hurt web usability for people around the world.

The internet is full of these tradeoffs around accessibility versus security. As users and maintainers of this wonderful place, I find conversations like these to be one of the best parts of building our world together.

Now, we just gotta get some emoji support.

Logan McDonald
I'm a software engineer living in Brooklyn.
Should Developers Specialize or Generalize?
#career #beginners #webdev #codenewbie
Why I Decided to Invest in My Portfolio as a Junior Developer
#webdev #career #codenewbie #help
10 of the coolest developer T-shirts from devshirt.club
#watercooler #codenewbie #career #writing

Once suspended, logan will not be able to comment or publish posts until their suspension is removed.

Once unsuspended, logan will be able to comment and publish posts again.

Once unpublished, all posts by logan will become hidden and only accessible to themselves.

If logan is not suspended, they can still re-publish their posts from their dashboard.

Once unpublished, this post will become invisible to the public and only accessible to Logan McDonald.

Thanks for keeping DEV Community 👩‍💻👨‍💻 safe. Here is what you can do to flag logan:

Unflagging logan will restore default visibility to their posts.