This post was first published on CoderHood as From Coding to Management to Leadership. CoderHood is a blog dedicated to the human dimension of software engineering. 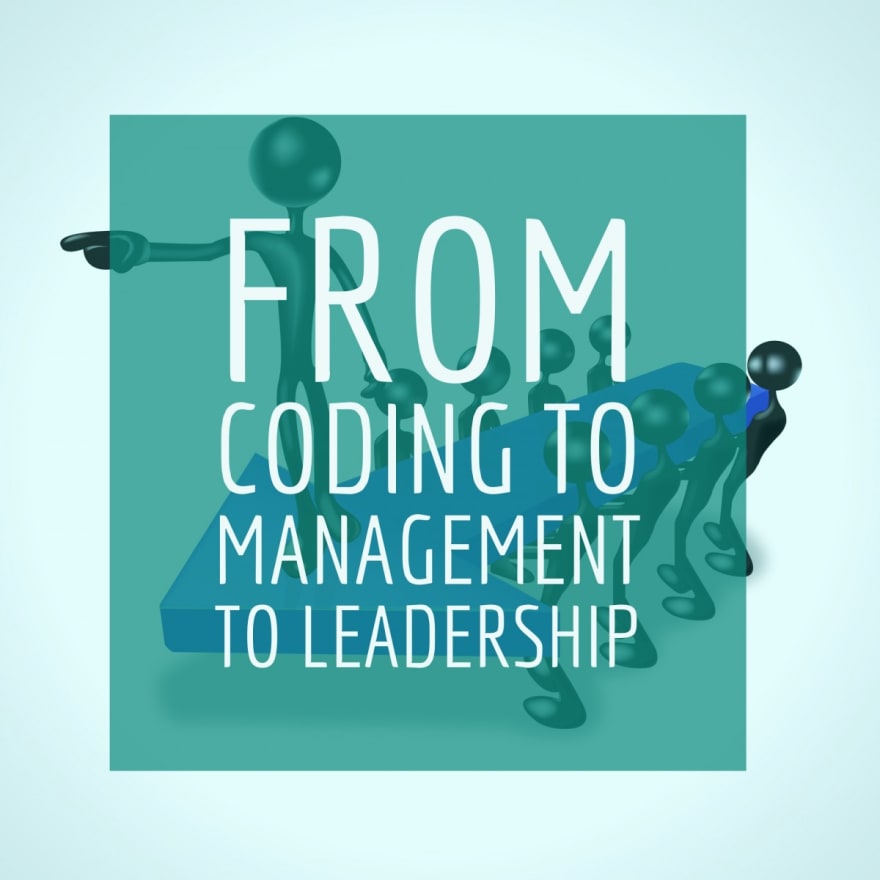 Management is not for everyone.

Most engineering managers start as developers, writing code full-time. At some point in their career, they reach a fork in the road. The sign pointing straight ahead says, "technical path," and the one on the left says, "management path."

The straight path continues through a familiar technical landscape. In this direction, most problems are solvable logically and intellectually, with tools and systems built to help. The biggest challenge on the technical path is keeping relevant with the time. Technology changes at an impressive speed, and staying still is a death sentence.

The other path is scary and uncharted. It still requires technical skills, but at a higher level compared to the purely technical track. When you take this road, interactions with people become an important part of the job.

People are complicated, they don't follow defined patterns, and do not always work in logical ways. Emotions, personalities, personal situations, fears, health and many other factors enter the picture in a complex ecosystem that cannot be analyzed with tools. Taking this path does not mean adding new responsibilities to the old job. It is a new job altogether.

Software developers take the left path for one of two reasons. Sometimes they are pushed into it by their boss. Other times, they see an opportunity and choose to take it.

Why are developers asked to manage?

There are many reasons why developers are asked to manage other developers. Every situation is a little different, but I am going to give you three common reasons.

In some organizations, the technical career track comes to an end sooner than the management track. For example, a developer can progress to Principal Engineer, while a manager can go up to CTO. In those organizations, a developer who is not interested or capable of managing people runs into a role-wall.

If a developer is skilled and is regularly promoted, their manager sooner or later faces a dilemma. What to do with them? How to recognize their contributions and increase their responsibilities if there are no more promotions available in the technical track? There are a few common answers to that question:

Reason #2 -- To scale the organization, growing leadership from within.

Typically a single manager can have up to seven direct reports. During times of growth, hiring new people requires finding new managers to scale the organization. The best managers are promoted from within the organization, and for that reason, leadership is keen to develop existing engineers to management roles.

Since software development organizations tend to grow fast, management opportunities are not rare. In theory, every time seven new engineers are hired, a management position opens. What is rare is for developers to have the skills required to be managers and for leadership to know how to train new managers into their role. Not everyone can, want or should be a manager.

Reason #3 -- To allow for reorganizations without having to hire more managers.

Engineering departments reorganize all the time, even if they are not growing. During the shuffle some people are promoted, teams split or merge, and reporting structures shift. In the process, managers end up with too many direct reports and the need for new leadership becomes clear. At that point the need is acute, and there is not a lot of time to hire new managers. That's when, often, developers are promoted to management to fill the gaps.

Why some developers choose to go into management?

Writing code is fun, and it keeps being fun for a long time. Some developers would never want to do anything else, and probably never will. Others would like to code forever, but they also want to scale their efforts and run their team. A few want to run entire engineering organizations, abandoning full-time coding altogether.

I started by being part of the first group. I often ended up in technical leadership positions, and eventually accepted a hands-on management role. At the time I wasn't in the right organization, and I didn't like the experience. I had no support nor mentorship and hated it. Years later something switched in my brain, and I knew that I wanted to scale my area of influence. I jumped on an opportunity, and I have been thrilled in my new role ever since. Today I still code, but not often, and I do not miss it.

My transformation from full-time coder to manager, and eventually to manager of managers, took many years. It wasn't easy to understand and start feeling that leading teams have great value. My output is no longer measured by the amount or the quality of code and systems I write and design. It is measured by the amount and quality of code and systems my organization writes and designs, and by the quality of its culture.

My job has shifted from writing code to providing the ideal environment for others to write code. It takes all the experience I accumulated in 30 years of software development to be effective in my role. On top of that, I have to learn how to interact with people, mentor them, coach them and get out of their way so that they can do their best work.

That is my story, but there are many others.

Engineers choose to manage other engineers for different reasons. Here are some of the most common ones:

If you are a developer in a scaling software organization, you will be asked, sooner or later, if you are interested in management. Do not take that path if you are not sure why you want to do it. Also, do not take it if you are not planning on giving your all to your prospective employees. Nobody seeks to have a manager who is managing them as a career experiment. People want to have a manager who cares and is going to work hard to create the best possible environment for them to thrive.

Management does not give you control. It only gives you an opportunity to prove to your staff that you can be a good leader and career guide. If you can't prove it, your employees will not let you lead. A leader can only exist if his people allow him or her to do so.

Before taking a management role, make sure to...

How is javascript code executed?

Want To Be a Programmer? Stop Overthinking It.