If you opened this article, you are at least curious about the world of the Penguin. Be careful: you are being attracted to the more open-source, private and customizable side of the Force.

Some people can feel comfortable in Windows and never even consider an alternative to it, many do not even know that there are options to the Microsoft system and others fear that Linux is just a “black screen” (terminal).

This is the first in a series of articles in which I will try to resolve some of your doubts about the Linux world and show you that this subject is only a 7-headed monster if you want it to be.

After all, what is Linux?

At first this question may seem trivial and something similar may come to your mind: “Linux is a operating system, like Windows and MacOS, but free”. But that's not quite it...

The Operating System (OS) is the name given to the program or set of programs that manages computer resources, as a bridge with a graphical interface between hardware and the user.

Linux, in fact, is not an operating system, but it is the kernel (core) present in several OSs.

The kernel, in general, is the heart of the operating system: the part that makes the connection between applications and hardware.

Another point is that not all Linux-based software is necessarily free because, as it is an open-source project, its license allows third parties to sell a proprietary version of the kernel or distro. Some examples would be Red Hat Enterprise Linux, Zorin OS Ultimate and the SUSE Linux Enterprise product line.

Open-source software is created under a license that allows the public to study, modify and distribute their code as they see fit. Some restrictions may apply depending on the license.

"Distro" is just an abbreviation for "distribution", a term used to refer loosely to a Linux-based operating system.

There are several distros, each aimed at its audience or for a specific purpose. So, despite being based on the same kernel, the distros can be very different from each other, ranging from a modified kernel and proprietary programs to different interfaces.

Interface is the part of the distro that manages the way things are presented visually to the user.

Unlike Windows and MacOS, which have only their standard interface, there are several graphical interfaces in the Linux world.

Some interfaces are more friendly, intuitive and even have similarities with Windows to facilitate the user's transition (such as Cinnamon and KDE Plasma).

Other interfaces, on the other hand, may have a usability quite different from what you are used to (such as Gnome).

In general, other interfaces can also be installed via the terminal and, when logging in, you choose which interface you want to use. 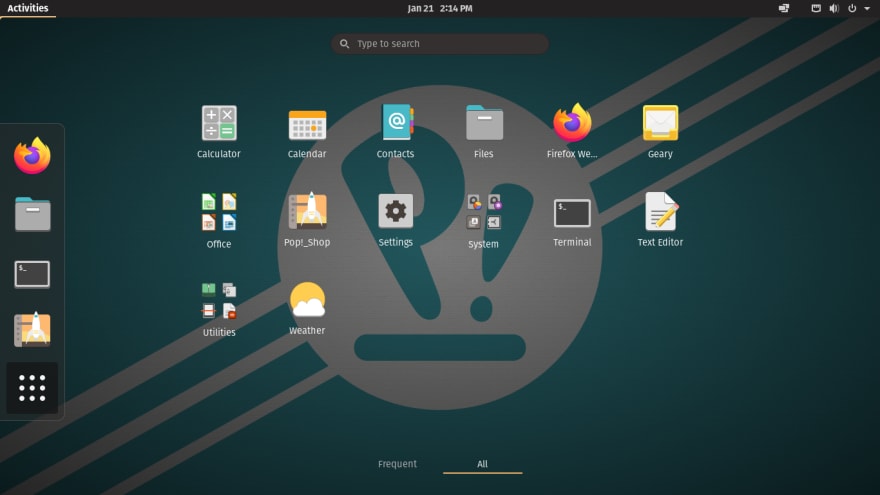 Gnome is a project that places a special emphasis on usability and even though it seems strange at first glance, it is an intuitive and easy to adapt interface.

You may have heard of one of the most famous Linux distros, Ubuntu. With Gnome as its interface, it is a system recommended by many people precisely because it is easy to learn to use, has a solid base and constant updates.

There are several other distros that use Gnome as an interface - Manjaro, Debian, Fedora, Pop!_OS, GnomeOS - each with its own unique features. 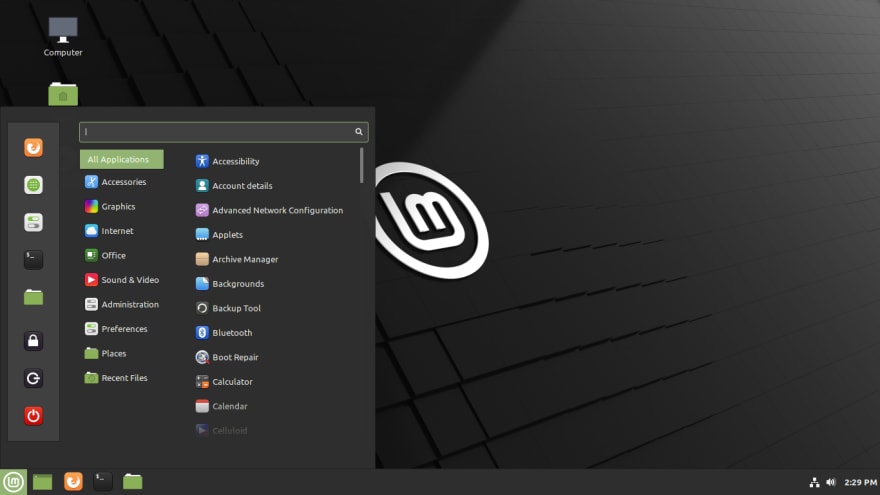 Cinnamon is an interface derived from Gnome developed by the Linux Mint team. For Windows users, this is a much more friendly and familiar interface, which is precisely what he intends to do: be a gateway for those who want to migrate to the Linux world.

Without a doubt, Linux Mint is another great recommendation, with an extremely intuitive interface and, as it is based on Ubuntu, it has its base of programs updated.

There are other distros that use Cinnamon besides Linux Mint like Debian and Fedora, with their differences, of course.

It is worth mentioning that distros can release different versions of themselves but with a different interface. 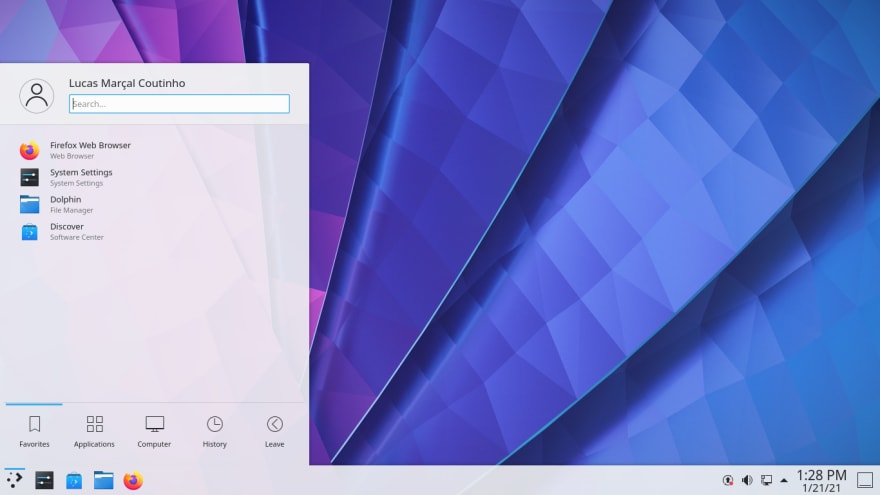 KDE Plasma is developed by the KDE team with a focus on usability and, mainly, customization. KDE Neon is the distro that KDE maintains to test new features in KDE Plasma.

With advanced customization options available by default, distros with KDE Plasma are a great option for anyone looking to modify the system to the fullest.

Some of the distros that adopt this interface are Manjaro, Debian, Fedora and Kubuntu.

There are other interfaces like DDE, XFCE, LXDE, LXQT, Mate and UKUI. I recommend you do your research, take a look at the channel 🇧🇷 Diolinux to see how the interfaces work and which ones you like best.

The perfect OS does not exist, but everyone is constantly updating to always be the best version of themselves. However, the perfect system for you would be one that meets all your needs.

There is also no perfect interface, but the one that you feel most comfortable to use, in which you are more productive or just the one you find most beautiful.

I recommend that you test, experiment and learn more about it. Most distros do not charge you anything for using them and none limit your access to the system so... why not give it a try?

Nothing is perfect, unfortunately neither is the Linux world. So, here are some pros and cons of using Linux distros over Windows.

Research, first of all, whether the programs and resources you need are available in the Linux world.

I recommend that you watch the videos 🇧🇷 Qual a melhor distro para “——” and 🇧🇷 Como escolher a melhor distro para o seu uso?. The first is basically a re-recording of the second, but both complement each other and will show you some other important points for choosing the distro.

Taking into account some points I separated some recommendations of distros for questions:

Deepin and Ubuntu Kylin are by far the most beautiful distro for me. But there is a catch: both are chinese distros and there is no guarantee that you will find any material (forum, documentation, videos...) in english or in your native language for you to consult if there is a problem. Another point is that Ubuntu Kylin itself may have some parts of the system not translated.

Another very beautiful distro is eXternOS, but it is still in beta until the posting of this article.

One option would be to use a distro with KDE Plasma and modify it as you wish, there are several tutorials on the internet and the results are incredibly beautiful.

This is a wound that anyone who does not like the Linux world loves to hammer. As I said earlier, Linux does not have many native games like Windows... But there is nothing to stop trying to run Windows games on Linux.

I recommend you to watch these two videos: 🇧🇷 Configurando o Pop!_OS para jogos and 🇧🇷 Como jogar no Linux em 2020. They will give you a sense of how things work and give you tips on where to look to see if your favorite games are supported on Linux.

And, as one of the video titles already suggests, Pop!_OS is one of the best distros to play today, already coming with Nvidia drivers (choosing this option on the site) and having a repository (program base) updated frequently.

Here we already need the latest software, constant updates and a large arsenal of programs. Ubuntu has long been the darling and the best distro to develop in the Linux world because it is popular, stable and easy to use.

However, over time, other distros have also acquired and reinforced these characteristics, with some having more appeal to the developer audience like Pop!_OS.

Stability (one distro to rule them all)

In general, distros like Ubuntu, Linux Mint and Pop!_OS try to deliver a balance between stability and new features. However, there is an operating system that is known to focus on stability: Debian.

Debian is an operating system composed entirely of free software and maintained by the community. Its update cycle is considerably longer than traditional distros: they usually release updates every 6 months, whereas Debian releases every 2 years (some specific patches may be released in the meantime).

This distro may not yet have the programs in their most recent versions, as their updates are only available after many tests.

You don't have to be indecisive among so many choices, it's open-source! If you want, just format and install another distro or another interface. You are free to install, reinstall and modify as you wish.

I hope I have clarified some of your doubts. I know I haven't addressed every possible subject, but other articles will come to complement this one.

This article was initially written in Portuguese, so if you find any inconsistencies in the text, please let me know!

Feel free to say what you think of this article, ask questions, point out a topic that was not very well explained or that needed to be talked about, suggest other topics and complement what has already been said. To the next!