I've been using Git as a "black box" for years. 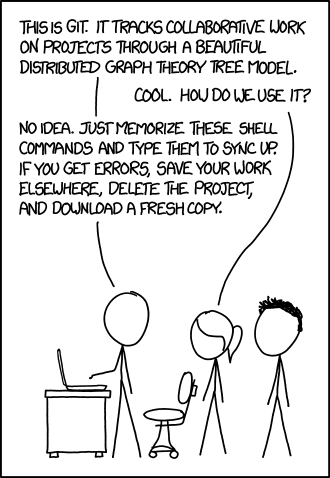 Until a year ago. I was tired of using it without knowing how it works under the hood. I finally grab the bull by the horns and started to learn it. I read Pro Git and make tons of experimentations. I've found out that it's not as complicated as it looks like!

To make things more understandable, I will start with a new basic project (2 files: index.js and README.md).

Now let's see what we have in the .git folder:

Git created 4 files. For not ending with thousands of files under the same folder, git automatically truncates the 2 first characters for the folder name. To retrieve one git object, you have to concatenate the folder name + file name.

And because the files are not human-readable, you can use git cat-file <sha-1> -p to see what's inside (or use the -t option to get the type). By the way, you can only use the first 8 characters.

Here's how the files are linked together:

Please note that blobs don't store their filename (and location). That's one of the reasons why sometimes git lost history when you change file location ;)

🤔If you try it locally, expect to have different hash (different author&date)!

Now we want to update index.js and add a second line to the file:

We now have 3 more entries: 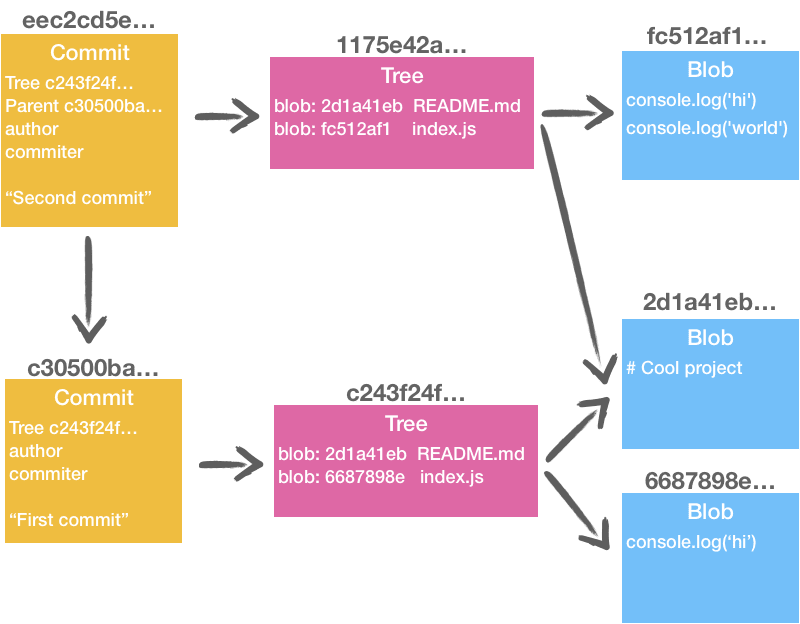 👀 Something interesting here: Git doesn't store diff between files! Thanks to the packfiles (in .git/objects/pack), Git keeps a reasonable place on the disk.

In this last step, we are going to add one commit. Then, we will go back in the past to "remove this commit".

As you might guess now, git created 3 new files. The structure is similar from step 2.

Now, let's pretend we want to go back in the past from 1 commit (git reset HEAD~1 --hard).

...and now you think you fucked up everything and your commit is gone forever. Right?
Maybe. Let's count how many git objects we have...

"You can't lose code with git."

More seriously, I use git push --force, git rebase and git reset --hard daily and I never lost anything. But, we are human and humans are fallible.

Don't worry, if you want to rollback, you don't have to go threw all those files. There's a magic trick!

If you try to retrieve the history with git log, you will not see the "Third commit". But, if you add the additional option -g (for --walk-reflogs), then you'll see the third commit.

To make it nicer, you can do git log -g --abbrev-commit --pretty=oneline.

This super-useful command has an alias: git reflog ❤️

(Note: you can get something similar in .git/logs/HEAD)

Now, you have the third commit's fingetprint: 00ee8c5. You can now git reset 00ee8c5 --hard to cancel previous reset.

In some cases, git reflog will not help you:

Also, if you use git commit like you ctrl + s, you might be easily lost. I'm sorry, but, can't do anything for you, except recommending you to read my post about the conventional commits. In my opinion, it's the cleanest way to use git.

And that's it for today!

Thank you for taking the time to read this post. I hope you found it useful! If you liked it, please give it a ❤️ or a 🦄! Also, feel free to comment or ask questions in the section below :)

Once suspended, maxpou will not be able to comment or publish posts until their suspension is removed.

Once unsuspended, maxpou will be able to comment and publish posts again.

Once unpublished, all posts by maxpou will become hidden and only accessible to themselves.

If maxpou is not suspended, they can still re-publish their posts from their dashboard.

Once unpublished, this post will become invisible to the public and only accessible to Maxence Poutord.

Thanks for keeping DEV Community 👩‍💻👨‍💻 safe. Here is what you can do to flag maxpou:

Unflagging maxpou will restore default visibility to their posts.