The JAMstack has been talked about in recent years like a way to create static websites that scales very well in many different ways.
Since it becomes more and more mainstream, it made sense to people to think about how to apply older patterns that we like in this
quite particular context.

In this post, I will share with you my vision of A/B testing (or feature flagging, everything written below may apply to both) using the JAMstack.

But first, why do we use the JAMstack?

According to jamstack.org, we use it because:

Why do we use A/B testing?

People use A/B testing to measure which variant of a website is more appreciated by their users. The idea is simply to provide different visual representations of some data and check which one attracts more people. 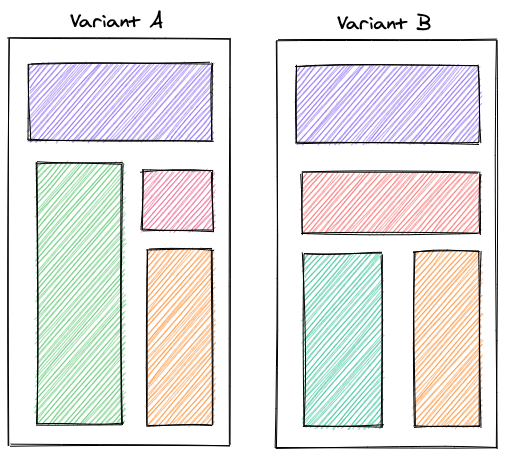 How do we use A/B testing in non JAMstack applications?

In applications that are not built on top of the JAMstack, the idea is quite straightforward.

When opening the application, it will make a request to a remote server to get the different available variants. Then, based on some conditions in the codebase, we are able to display the good variant to the good user.

The following is an example of a client-side A/B test written with Reactjs:

As we see in the snippet, the code is executed in the user's browser. Also notice the loading information while the request is pending before being able to display the variant content.

The following is a tiny sandbox allowing to switch on and off a feature flag to display a new variant of a homepage. When using services like LaunchDarkly, this is exactly the kind of actions you're provided with.

Why A/B testing on the JAMstack is different?

Remember one of the main arguments of building on top of the JAMstack is fast page loading (performance).

The problem is that making the HTTP request is so critical that we can't show anything else than a loading information to the user before resolving the variants and being able to show them the good content.

In a static environment, we are waiting for a dynamic information to display meaningful information.

When A/B testing the "standard way", using runtime information will make the application performances worse by increasing the time for the displaying the first meaningful content. Loading static pages should be "instant" but relying on an HTTP request and an intermediate loading state before displaying the content will take extra time and decrease the experience.

In some scenarios, Lighthouse performance score can drop by around 25 points (up to you to determine if it's significant or not).

Also note that some tools helping building applications using the JAMstack don't even run JavaScript at all, meaning that it's not possible to rely on HTTP requests to access remote data at runtime.

How to make A/B testing in a JAMstack fashion?

The JAMstack is about building static pages. Taking this notion to the extreme, we can imagine creating a dedicated set of static pages for different variants and host them in different places, like for example, different machines. 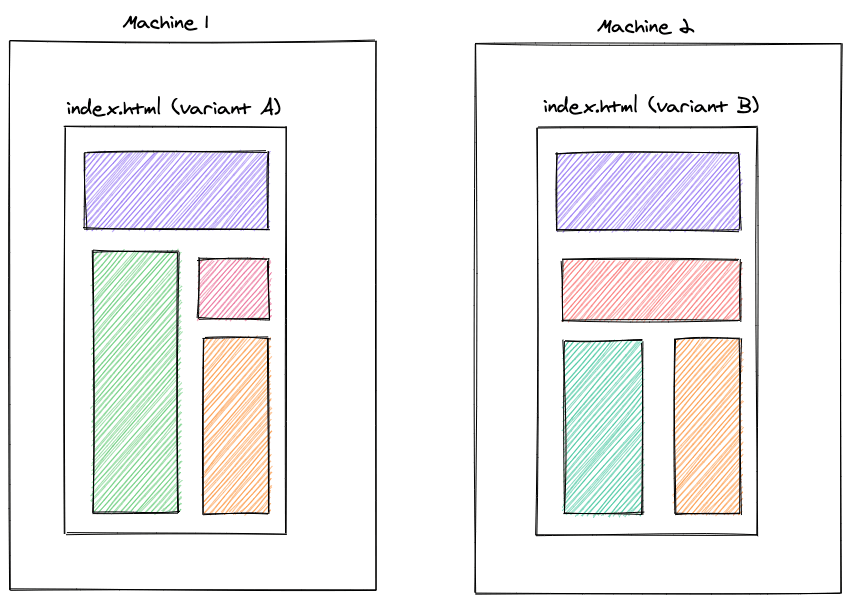 Since pages are statically generated at build time, we can rely on environment variables to display the good variant content:

The next step is to rely on some kind of proxy to route the different users to one of the two variants and make sure they always see that variant.

Remember, we can't rely on runtime information to store the variant, like an authenticated user id for example. We need to rely on something else. Hopefully, HTTP Cookies exist that allow for a client-server kind of data sharing. We can benefit from them to store the actual variant requested by the user and make sure that they will always get routed to that variant. 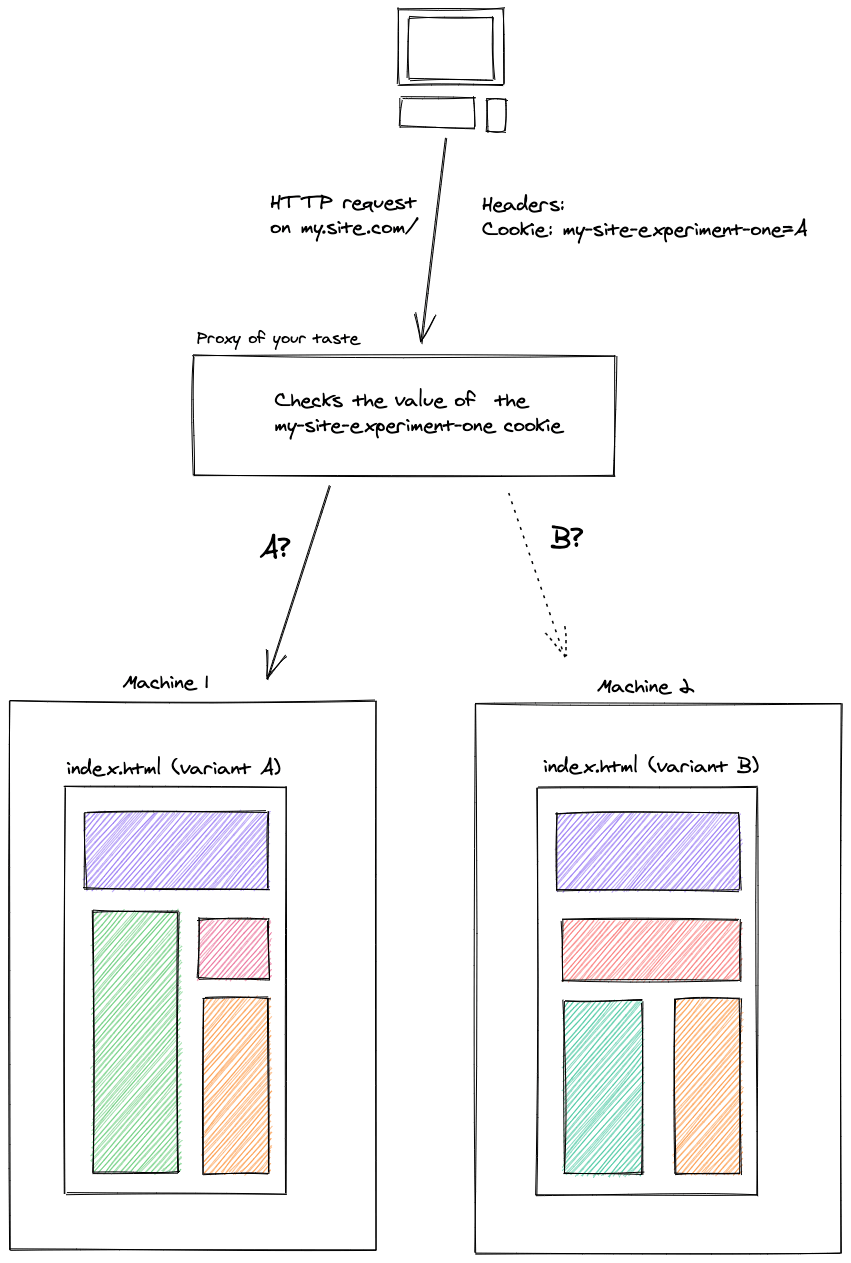 Observations on this approach

The first observations to push upfront is that we have kept the page loading performances provided by default by the JAMstack. We don't have to wait for runtime computations to display content on the page.

The second observation is about the tradeoffs we decided to make: we shifted the A/B testing responsibility closer to the infrastructure layer. The proxy has an important role to play in this scenario. 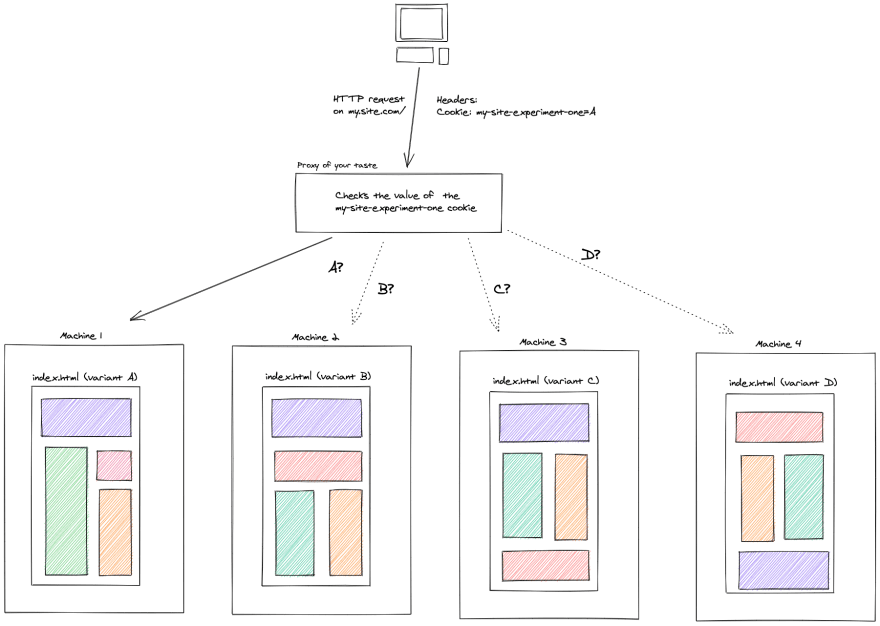 There's also one side effect that I find positive (but it can feel negative) is that it can be hard to combine multiple A/B experiments.

Let's say that we have 2 pages and that we want to run an experiment on both the pages:

My expectations is that there will be solutions allowing to make A/B testing at the file level itself, and not at that site level.

If you're using Netlify for hosting your websites, they have a feature called Split-testing that allows for these kind of testing using a branch based approach.

If you have any other references in mind concerning A/B testing or Split Testing on top of the JAMstack, feel free to drop them on Twitter.

Want to Get Better at Java? Go Old School.

Once suspended, mfrachet will not be able to comment or publish posts until their suspension is removed.

Once unsuspended, mfrachet will be able to comment and publish posts again.

Once unpublished, all posts by mfrachet will become hidden and only accessible to themselves.

If mfrachet is not suspended, they can still re-publish their posts from their dashboard.

Once unpublished, this post will become invisible to the public and only accessible to Marvin.

Thanks for keeping DEV Community 👩‍💻👨‍💻 safe. Here is what you can do to flag mfrachet:

Unflagging mfrachet will restore default visibility to their posts.