There is a lot of things to know in Data Science.

If we tried to survey the technologies used by Data Scientists, we might get a picture like this: 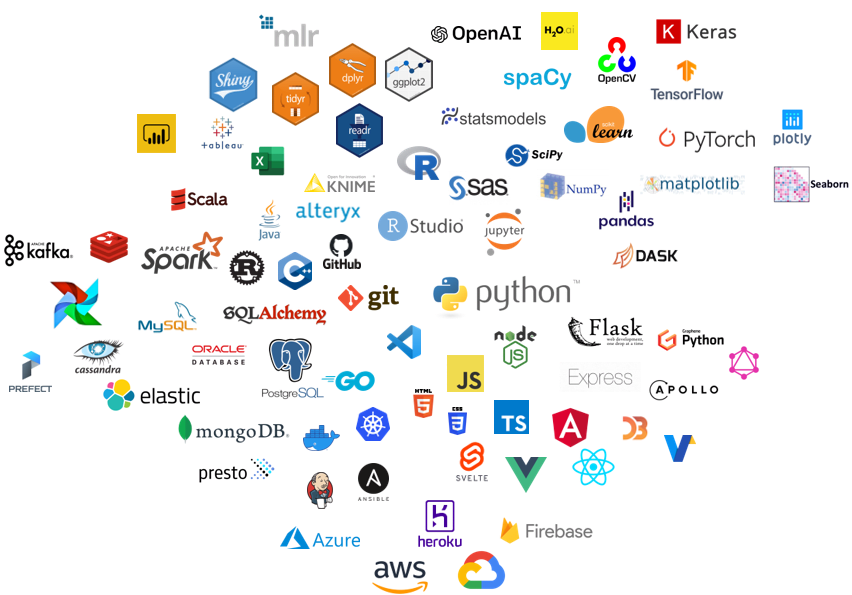 This list is in no way comprehensive (this is already filtered based on my personal interests). On top of that, this list will change year-to-year. Keeping up with everything will be impossible. Thankfully, no Data Scientists will need to know or use all of these tools.

But since we should strive to be T-shaped people, we should at least learn a good chunk of these technologies, right? But where do we begin? How much should we learn, and what technologies? First, we should discuss briefly the nature of the profession itself.

Data science is a broad and loosely defined field.

Data science is still relatively young and continues to evolve. Once popularised by the tagline "sexiest job of the 21st century", many people were attracted to the interesting profession.

What may have begun as an application of statistics to solve business problems, is now a name that encompasses areas of big data engineering, visualisation, machine learning, deep learning and artificial intelligence. The rapid evolution was in part due to the breadth of areas in which data science can be applied to, but also because the technologies have also developed rapidly. The number of skills that a Data Scientist must possess has grown with the nebulous definition of the job.

If we had to group some of the subfields of data science, they would look something like this:

Sure, these groupings are not clear cut and there are overlaps. At least, these groups give me some way of organisation. I have noted in the brief descriptions, these roles can be carried out by dedicated specialists in the team. But in a small organisation, it could be up to the one-person generalist data scientist to carry out all of these functions.

Whether we need to perform all of these roles or not, it would be helpful to understand a little bit about what other people in the team do. Or perhaps you are looking to switch your career track, say from a data analyst to a data engineer or from a web developer to a machine learning engineer, in which case, you will benefit by knowing something about everything.

Coming back to the tech stack, we can (loosely) group the technologies according to these roles. 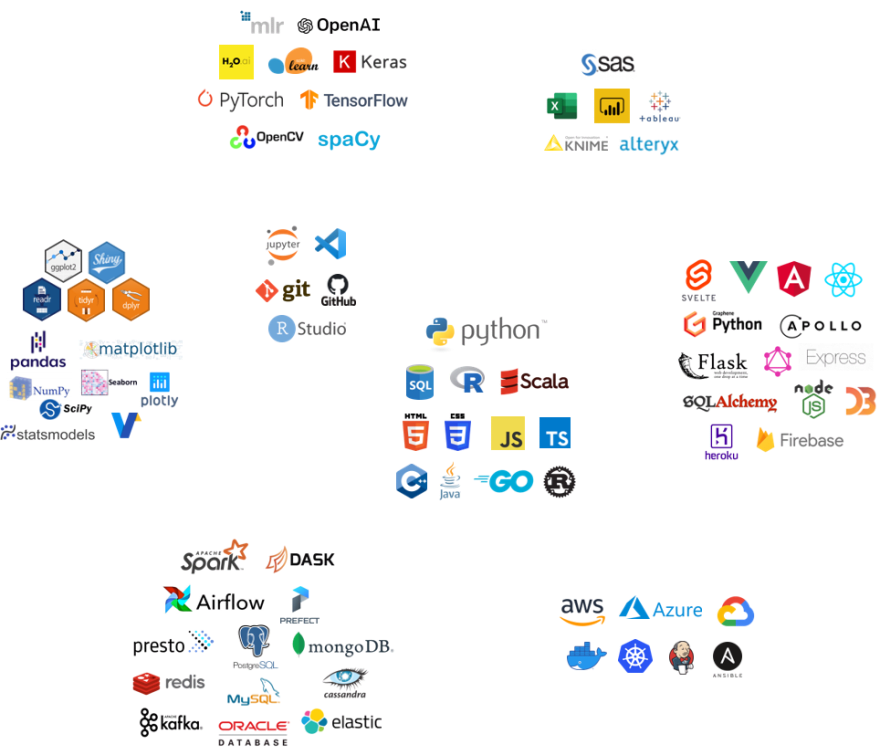 EDIT: (Notes on what these are added towards the end of the post)

We can't be experts in everything.

Scanning through job descriptions and MOOCs, we can probably narrow down the very employable stack to something like the following: 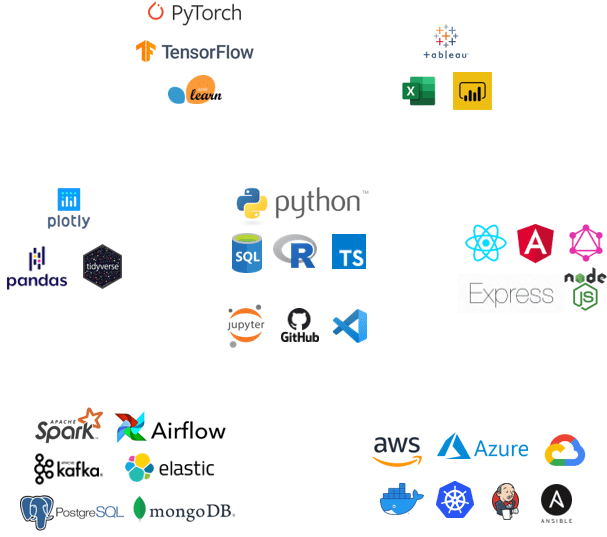 Even this is too much to truly master. Even if I have touch points with all of these technologies, I wouldn't need to learn all of them. I would either be working with specialists or only use them to the extent that can be handled by reading through the documentation.

But I think I can remove some "duplicates" or remove some from my personal "core" stack from a learning standpoint.

After much consideration, my data science "core" stack for the coming years will look something like this: 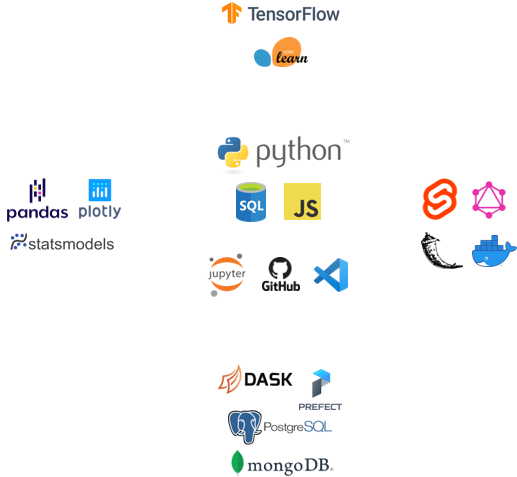 Even though this is just a silly exercise, I still struggled to come up with the final, and personal, tech stack. I am not sure that this is the ideal minimalist stack. And even if it was, I won't be able to use many of these at my current job. I would probably use this "data science core stack" if I were to embark on a personal project or start my own tech company. There are other technologies that I have learned that I will continue to keep up with (Tidyverse, Spark, and Airflow), additional technologies I will learn a little bit about this year (Vue perhaps) knowing that I probably won't use them. I also recognise that one must choose the right tool for the job and that this list may look different in a couple of years' time.

Nevertheless, I think doing this kind of exercise once in a while is helpful in reassessing the pros and cons of each technology and getting the feel for the overall landscape. I have probably read over a hundred blog posts and a hundred videos about the latest developments and commentaries about the technologies listed in the first diagram and many more. This in itself was a valuable exercise. It also helped me narrow my focus on what I wanted to learn and why I should prioritise them, because realistically, I won't be able to (nor do I need to) learn all of them.

So, what's your tech stack?

I've jotted down some thoughts that went through my head as I was reducing my tech stack. These are all personal opinions, but the final tech stack is a personal one. So I think that it's okay. 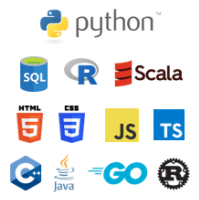 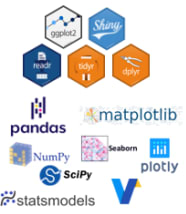 Plus a whole bunch of packages not included in image. Just use "Tidyverse". R tends to have individual libraries for doing just about any stats. While I cannot list them all, Tidyverse should be central.

The pandas ecosystem is the Python equivalent to Tidyverse of R.

*Altair really belongs in the Vega family (JavaScript-based, and D3.js based), which the altair provides the Python API for.

**Unlike R (ggplot), viz tools in Python does not have a king (yet). I included plotly in the pandas ecosystem in the list, but it is an ecosystem on its own and extends beyond just python. Sorry. 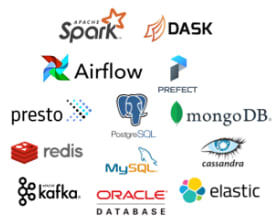 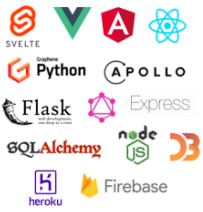 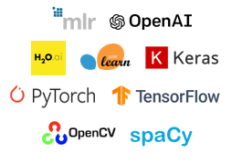 What language or framework are you planning to learn in 2023?

Building a Radar Chart in JavaScript

How to Make Money with Programming

Once suspended, minchulkim87 will not be able to comment or publish posts until their suspension is removed.

Once unsuspended, minchulkim87 will be able to comment and publish posts again.

Once unpublished, all posts by minchulkim87 will become hidden and only accessible to themselves.

If minchulkim87 is not suspended, they can still re-publish their posts from their dashboard.

Once unpublished, this post will become invisible to the public and only accessible to Min.

Thanks for keeping DEV Community 👩‍💻👨‍💻 safe. Here is what you can do to flag minchulkim87:

Unflagging minchulkim87 will restore default visibility to their posts.