As I revise the fundamentals of JavaScript and other languages/frameworks, I write mini-articles to help you remember the basics. In this article, we will be looking at Javascript functions, how to call them & their uses.

JavaScript is hard enough as it is to understand, and I found myself trying to remember EVERYTHING! - I soon discovered this isn't possible, and opted to focus on remembering the key points instead.
If you saw my desk, you would find that I have hundreds of sticky notes scattered around with key points on. In case this sounds messy, I can assure you that they are luckily colour coded depending on the language or framework.
These are what I use to help me write my tutorial articles, which hopefully help you, as you start your journey in Web Development.

The definition of a JavaScript function

A JavaScript function is defined as a block of code that can be reused, this code then brings together a group of statements and performs a specific task.

A function declaration has 3 parts:

I have included an example below to show you a function declaration, in this snippet, you can see there is:

In the example above, you can see that a function declaration has assigned the function to an identifier. If you input the above code into the console and run it, you will notice that the message will not be displayed to the console.

Try it for yourself:

You might be wondering why?
This is because the function declaration does not ask the code to run - instead it simply just tells us that the function exists. The only way a function will execute, or run, is if we call it first.

To do this, we type the function name or identifier followed by parentheses, this function call executes the function body/statements within the curly braces. Functions can be called as many times as you like.

See below example, calling the function like so, will now display the message "Hello Everyone!" to the console: 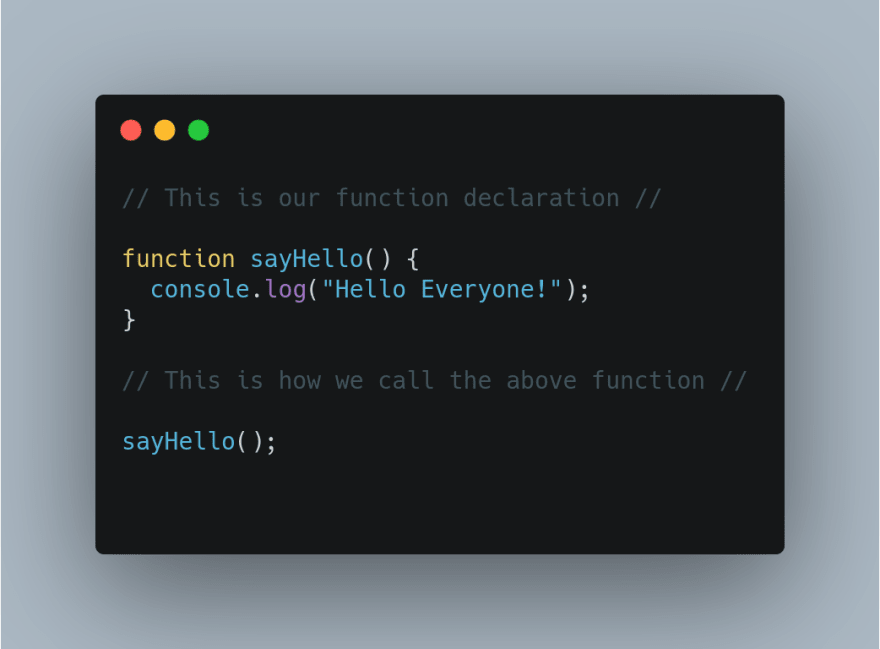 Now try it for yourself & see what the console logs:

The functions we have previously created ran a task without any input, but some functions can take input and use them to execute a task.
When declaring a function, we can specify the parameters.
These parameters allow functions to accept an input, and then run a task based on said inputs.
We use parameters as a 'placeholder' for input/information, which will then be passed back to the function when it is called.

Here is an example of the parameters below:

The parameters are located within the parentheses, and are declared as 'Width' and 'Height' - Inside the function body, however, these are just normal variables. The width and height parameters currently act as placeholders for the given values - These will then be multiplied together.

When we want to call a function that includes parameters, we will have to first specify a value within the parentheses that comes after the function name, when values are passed to the function, these are then called arguments.

Arguments are passed to the function as either a variable or a value. I have broken down the below code snippet - Hopefully, this will be easier to understand. 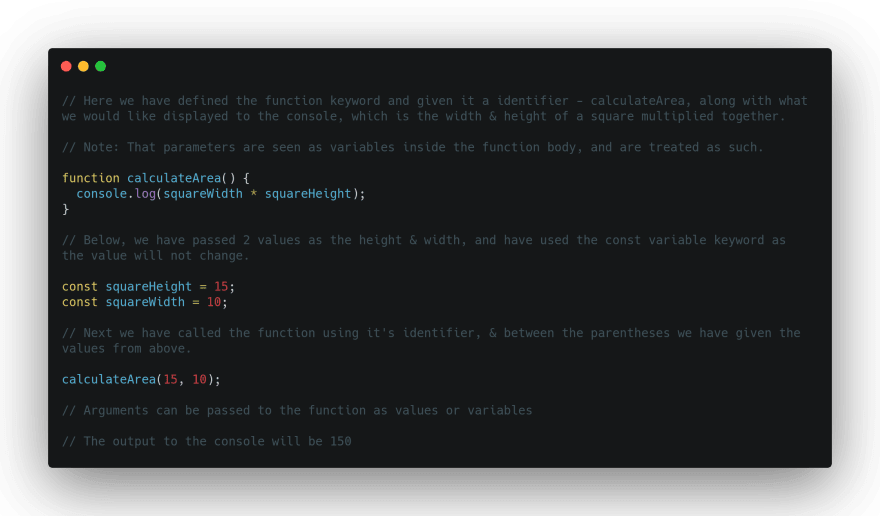 a new feature added to ES6 (which is a major update to JS providing lots of new features mainly focusing on simplicity and readability!) Is the ability to use default parameters - These allow the parameters we have previously learned about to have a value that is already decided (or predetermined!) In case an argument isn't passed to a function or it returns undefined when called. See below example: 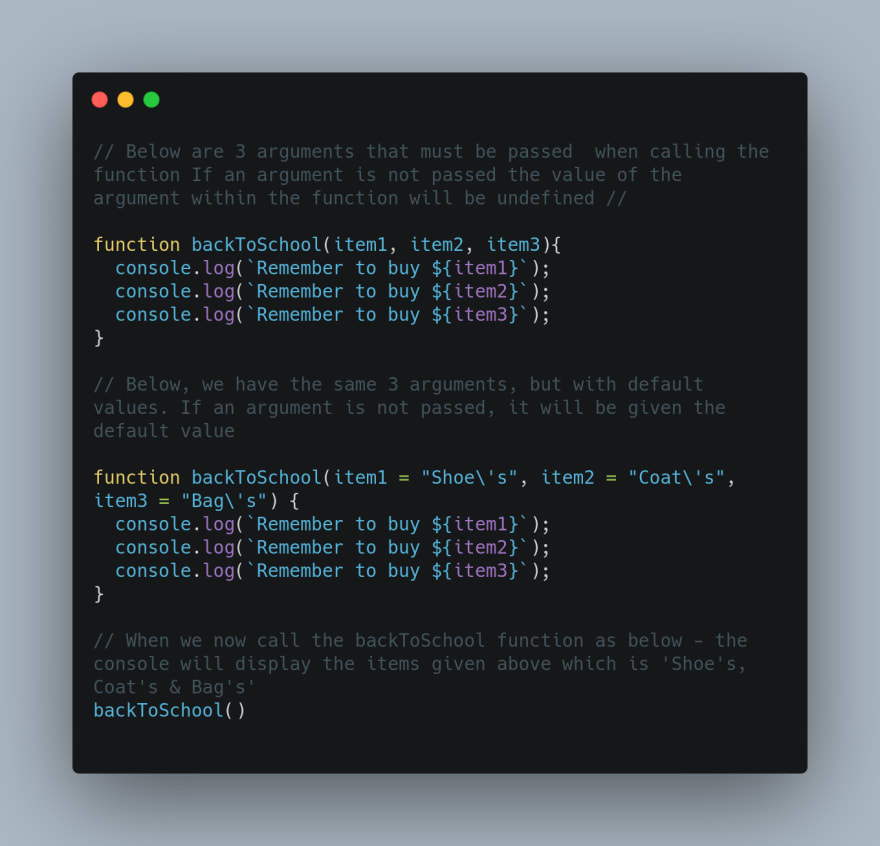 By using default parameters we are taking into consideration the situations when an argument isn't passed to the function when it is expecting one.

The computer will run through a function's code when we call it, and then sum up the result of this, returning the value undefined See below an example of how we can return the output: 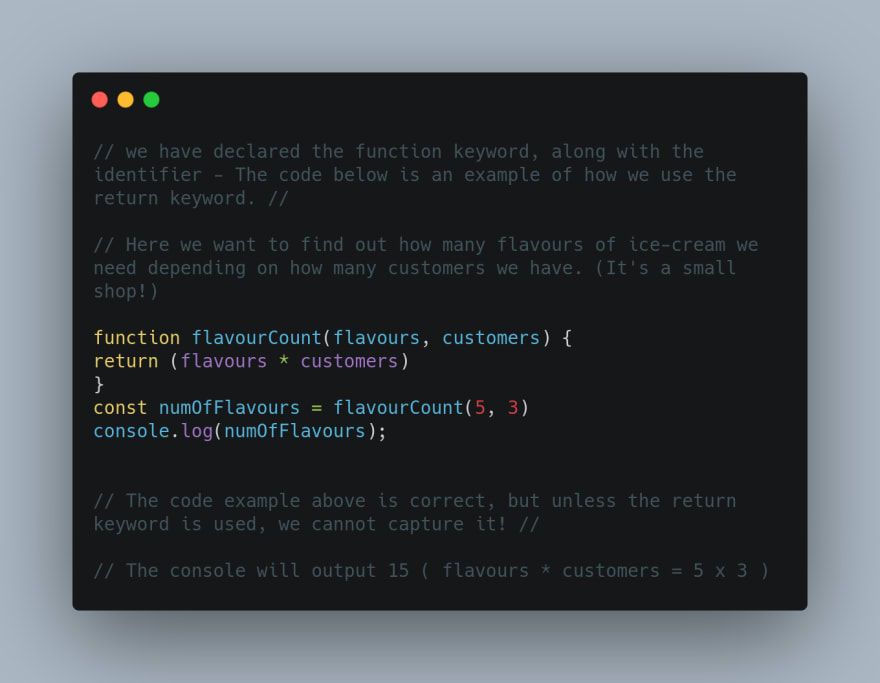 Using the return keyword, we can now capture our output, which will not then return the undefined error.

To pass this information back from the function call, we need to use a return statement, using the return keyword as stated above, followed by the value we want to return.

There are 3 types of functions we can use these are:

During the update of JavaScript (ES6) a shorter way to write functions was introduced - these were called Arrow functions otherwise known as thefat arrow - These take away the need to use the function keyword whenever a new function is created, instead parameters are included inside the parentheses and an arrow - => is added that is pointed towards the function body which is wrapped in the curly braces. 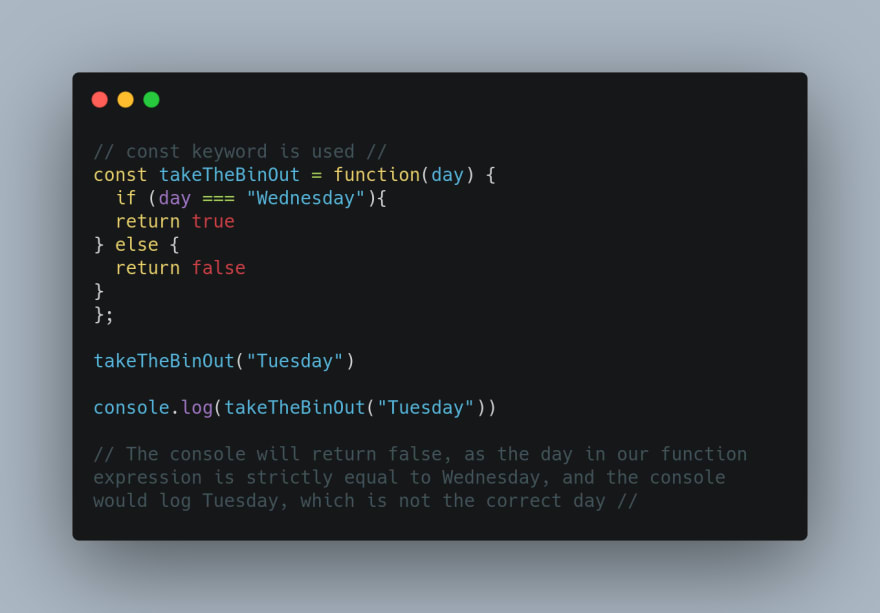 If you made it this far, Great! I really appreciate you taking the time to read my articles!

Laura Jane
Web Developer/Magician/Wizard <br> I write articles on certain aspects of coding to make your life easier! - JavaScript - HTML - CSS
My top tips for your first 3 months in a new tech role: An HONEST article.
#codenewbie #career #webdev
Time Management: Why we should make this a priority
#codenewbie #webdev
How to use Twitter to your advantage when starting out in Web Development
#codenewbie #webdev #beginners

Once suspended, misslorsx will not be able to comment or publish posts until their suspension is removed.

Once unsuspended, misslorsx will be able to comment and publish posts again.

Once unpublished, all posts by misslorsx will become hidden and only accessible to themselves.

If misslorsx is not suspended, they can still re-publish their posts from their dashboard.

Once unpublished, this post will become invisible to the public and only accessible to Laura Jane.

Thanks for keeping DEV Community 👩‍💻👨‍💻 safe. Here is what you can do to flag misslorsx:

Unflagging misslorsx will restore default visibility to their posts.