In this post, I'll show you how to implement a reactive social robot program as a finite state machine. We'll continue from where we left off in the previous post Programming a social robot using Cycle.js--so check it out if you haven't already! If you are in a hurry, here is the demo and complete code of what we are building in this post.

as a Cycle.js application. Here are the demo at Stackbliz and complete code in GitHub from the previous post.

Now, what if we want the robot to

How difficult would it be to update the existing program to have these additional behaviors? Try implementing the new behaviors on top of the travel personality quiz program.
What kind of challenges do you face?

From my experience, it was difficult to implement, or even just express the "stateful" behaviors in reactive programming. For example, to implement 1., I needed to know whether the robot is in the "waiting for a person's response" state but it wasn't clear how to represent such state in a scalable manner; I tried keeping all states in drivers (e.g., SpeechRecognitionAction emitting status events), as proxies (e.g., $lastQuestion in the previous code), or in higher-order streams, but none of them felt simple nor scalable. This was very concerning since many robot behaviors are expressed and implemented as stateful behaviors.

To address this problem, I propose using finite state machines to clearly express the desired robot behaviors. In the following, I first present a pattern for implementing a finite state machine in a reactive programming framework (Cycle.js) without scarifying maintainability. Then I demonstrate a use case of the FSM pattern via implementing the first additional behavior.

What is a finite state machine?

A finite state machine (FSM) is a computational model that can be used to represent and control execution flow. Due to their simplicity, FSMs have been frequently used by roboticists, UI developers and many others for a long time. An FSM we are using in this post is comprised of five parts:

If you are familiar with FSMs, the FSM we are using is a mealy machine extended with "variables".
Like a mealy machine, it has the following constraints:

Representing the "travel personality quiz" program as an FSM

We'll start from representing the "travel personality test" program we implemented in the previous post as an FSM: 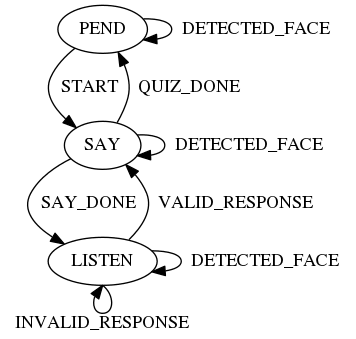 Notice that we use verbs as state names (as a popular robotics FSM library SMACH does). This is because we define the states based on distinct actions each state is performing, where the distinct actions are triggered by outputs emitted from transitions. You may have wondered why we did not create each state in the travel quiz flowchart as an individual state, e.g., ASK_CAREER_QUESTION, ASK_WORKING_ABROAD_QUESTION, ASK_FAMILY_QUESTION, etc. This is because representing the states that behave the same except the sentence the robot says with a single SAY state with a variable currentSentence (not shown in the diagram) yields the simpler, more maintainable FSM.

The inputs can be considered as the events that could occur in each state and are originated from actions, e.g., SAY_DONE, sensors, e.g., DETECTED_FACE, or external systems, e.g. START. We represent an input as a type-value pair. For example, the VALID_RESPONSE type input is paired with a value "yes" or "no", which is used to determine the transition between LISTEN to SAY (input values are not shown in the graph).

Now, let's update the FSM to express the first additional behavior mentioned above: looking at a person only when the robot is waiting for a person's response. 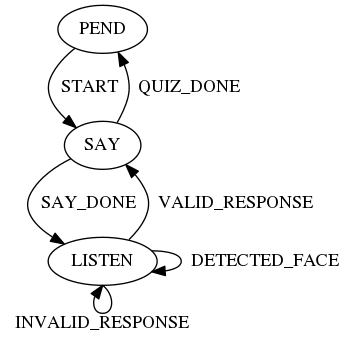 All we did here is remove the two self-loop transitions from the PEND and SAY states to stop the robot from looking at a person while the FSM is in those states.

First, we'll try to define the FSM in javascript as follows:

Setting up FSM in Cycle.js

Download package.json, .babelrc, index.html, create an empty index.js file in the folder, and run npm install to install the required npm packages. After installing, you can run npm start to build and start the web application--that does nothing at this point.

If you run the application, it should load a robot face that still does nothing on your browser.

The most important thing to notice here is that we divide the main function into three functions; input, transition, and output. The input function takes incoming streams in sources and returns a stream that emits the FSM's input values. We then use the fold xstream operator on the returned stream ($input) to trigger the FSM's transition function. Note that the fold operator is like Array.prototype.reduce for streams; it takes

Try testing whether the input function is behaving properly. For example, you can attach the addListener xstream operator to the returned $input stream and return some outgoing streams from the output function.
Like this:

Do you see the expected outputs on your browser console? You should see many inputs with the DETECTED_FACE type if the robot is detecting a person.

Let's now remove the dummy transition function and create a new one:

Try running the application and test whether it behaves as we defined in the FSM.

You just implemented a social robot program as an FSM!

Relation to the Model-View-Intent pattern

The FSM pattern is an application of the Model-View-Intent (MVI) pattern, an adaptation of Model-View-Controller in reactive programming, where "intent" is input, "model" is FSM status, and "view" is output. In addition to the MVI pattern, the FSM pattern additionally requires a specific structure for the "model"/FSM status and the "update"/transition.

This separation allows programmers to only update the portion of code in the two functions when they need to make the program more complex.

For example, if we were to implement the rest of additional behaviors mentioned in the Making "travel personality quiz" program more complex section, we'll need to first update the FSM to reflect the new desired behavior, e.g.:

The biggest challenge for using FSM is defining FSM. If you are using the FSM pattern and having problems with it, double check the current definition of your state machine. For example, look for the redundant states or input types that make updating the transition function cumbersome (merge them into one state with variables), or look for state or input type that is not being used as intended for (add new necessary states or input types). Another point to check is, making sure your FSM is taking reactive programming approach, e.g., make sure the three functions (input, transition, output) are as pure as possible. Defining effective FSM is art, but I believe using FSMs in reactive programming greatly helps the programmers to better organize their programs.

Thank you for reading! I hope I got you interested in using FSMs in Cycle.js. Let me know if something isn’t clear, and I’d be happy to chat.

My name is Mike Chung. I'm a graduate student interested in the field of human-robot interaction and machine learning. You can reach me on Twitter and on GitHub.

How to add Dark Mode toggle to a website.

What are React Hooks?