I want to enable my Nerves devices to talk to each other using Distributed Erlang. Here is my memo.

If you are not familiar with Nerves, this conference talk by a Nerves co-author Frank Hunleth will introduce it to you.

Find hostname or IP address for each device

Normally when shelling into a Nerves device, we will see IP address and host name printed by nerves_motd. 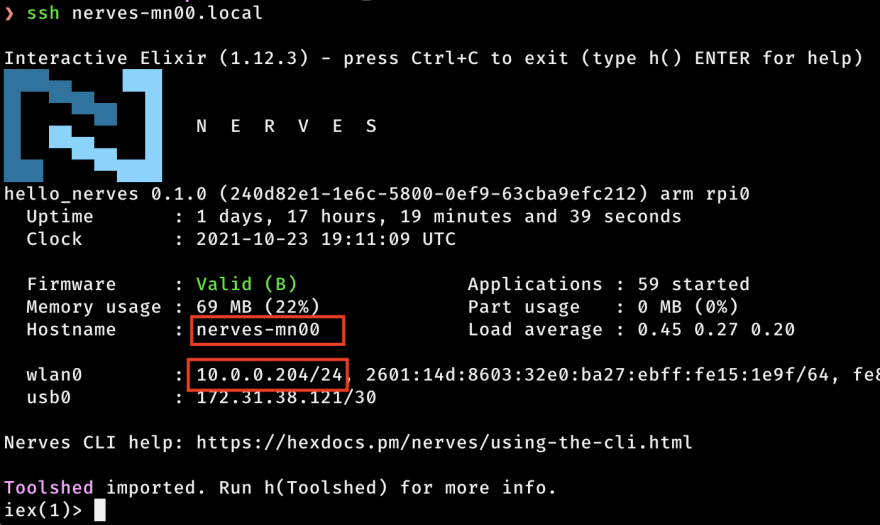 Connect a node to another

Invoke a function in another node

Yay, we were able to at least do something in another device through the Distributed Erlang. Isn't it cool?

I put together what I learned as kantan_cluster Elixir package. It allows us to form an Erlang cluster automatically. Please take a look if you like.

Once suspended, mnishiguchi will not be able to comment or publish posts until their suspension is removed.

Once unsuspended, mnishiguchi will be able to comment and publish posts again.

Once unpublished, all posts by mnishiguchi will become hidden and only accessible to themselves.

If mnishiguchi is not suspended, they can still re-publish their posts from their dashboard.

Once unpublished, this post will become invisible to the public and only accessible to Masatoshi Nishiguchi.

Thanks for keeping DEV Community 👩‍💻👨‍💻 safe. Here is what you can do to flag mnishiguchi:

Unflagging mnishiguchi will restore default visibility to their posts.