After creating templates, it should be rather tempting to add some styles and logic to them. Well yes, we'll see how to add static files in a web application using django. Static files are not only CSS, but also media/images and Javascript files as well. In this part of the series, we'll cover the basics of working with static files in django including the configuration, rendering and storing of the static files.

What are Static Files?

Static files as the name suggests are the files that don't change, your style sheets(css/scss) are not gonna change for every request from the client side, though the template might be dynamic. Also your logo, images in the design will not change unless you re-design it XD So these are the static files that needs to be rendered along with the templates.

We have basically 3 types of static files, CSS, Javascript files and media files/static templates,etc. They are all rendered in the same way but as per their conventions and usage.

You can learn about the theoretical information on static files fron the django documentation.

How to configure Static Files

Firstly you can create a folder for all the static files in the root folder. Usually the convention is static as the name of the folder. So, if you have created the template folder in the root directory, similar to that static folder can be created in that path.

Ignore the import os if you already have imported and the STATIC_URL if already there in the file. The STATICFILES_DIRS is the configuration that we tell the django environment to look for all our static files in the base/root directory of the project where the static/ folder is. The os.path.join() actually gets the path of the directory in ourr operating system to the folder specified in the case of our project the BASE_DIR is the path of the project and we add in the static folder to actually the project path. The final piece and the crucial one is the "static/" path, this can be other location where you have created your static folder within the project.

That's it! Yes, it's that simple. We can now create static files and render them in our templates.

Now this part is customizable and it depends on your preference, how you want to organize the static folder. The convention that I follow is creating separate folders namely for css, js and assets(or img) mostly. And inside of this folders you can store the respective static files. This also creates the project more scalable in terms of it's maintenance.

Let's create a static file and an image to demonstrate the concept of static files in django.

So, after configuring and creating the static files, we now can inject them into our templates. If you try to do the traditional way i.e. linking stylesheets/images/script files with HTML, it just won't work as you expect to and there's no point in using traditional way while creating a web application with a framework. So, there is a framework specific way to do things which make it easier and efficient for the project.

To load the static files from our configuration, we can simpy include the tag on top of the template.

The above templating tag will load the static tag which allows us to embed the links to the static files as explained earlier.

Now, we can actually access any file with the static folder in our templates with a particular syntax as below:

Its just a example how to load the file, we are calling the static tag which we have loaded in previously and from there we are referencing the css file. The compact syntax would be : {% static 'path-to-file' %}

NOTE: The path to the static file is relative from the Static folder, i.e. enter the path of the file considering the static folder as the base directory.

Demonstration of the static file

Let's render the static file which we created earlier i.e. the css file and the image into a template.

Assuming you have a app called post in your django project, you can render static files as below:

We are loading the static tag and then loading the css file using the tag syntax as explained above.

This is the static file,style.css stored inside the css folder of the static folder. This contains basic (very lame) CSS styling as we can understand.

The views.py file has the function that renders the template home.html from the templates folder inside the application specific folder.

The urls file in the project folder is the core configuration for project level url routesto individual applications within the project.

Append the following if your templates and static files are not configured properly.

SO, the result of the above code is as simple template as shown in the picture below: 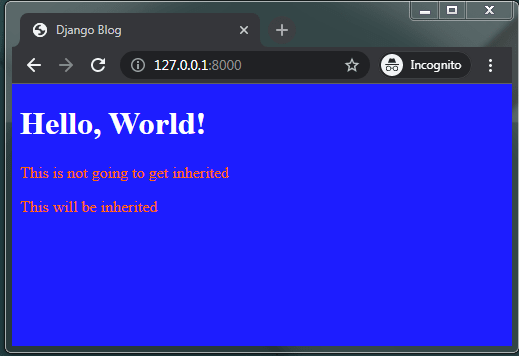 This will also work if you do it with traditional HTML syntax, but I'd explained why it's not recommended to do it while using frameworks.

Let's see how static files are rendered in inherited templates. We'll tinker with the for.html template created in the previous part.

We will have re-load the static tag for each template only if we need to include a new static file in the template. So we use the {% load static %} again as we are loading the static file (image) in this template. 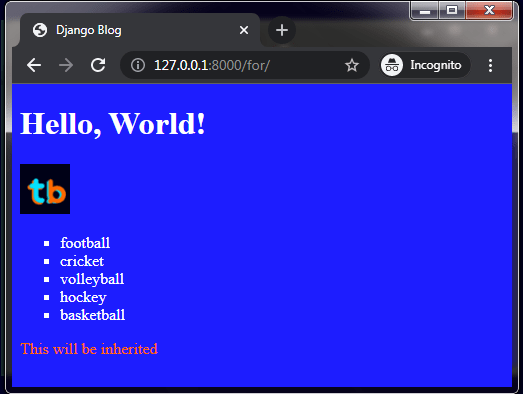 The list style has been changed and thus we can see that the CSS from the parent template is also being inherited.

Here is the django project structure which I have created with this series so far: 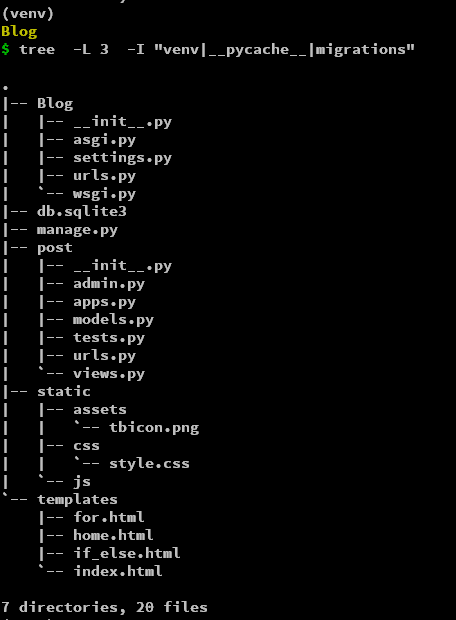 So that has been it for the Static files in Django. Though there are lot of depth for rendering and loading the static files, we'll explore as we get our grasp in the django and web development terminologies.

So, from this article, we were able to configure and render static files like CSS/Images and optionally Javascript into the Django application. We covered from ground how to configure, load and structure the folder for storing all the static files at the project level.

Hope you found it helpful and if you have any queries please let me know. We'll start with the databases probably from the next part in the Django Basics Series. Until then have a great week and as always Happy Coding :)

Once suspended, mr_destructive will not be able to comment or publish posts until their suspension is removed.

Once unsuspended, mr_destructive will be able to comment and publish posts again.

Once unpublished, all posts by mr_destructive will become hidden and only accessible to themselves.

If mr_destructive is not suspended, they can still re-publish their posts from their dashboard.

Once unpublished, this post will become invisible to the public and only accessible to Meet Rajesh Gor.

Thanks for keeping DEV Community 👩‍💻👨‍💻 safe. Here is what you can do to flag mr_destructive:

Unflagging mr_destructive will restore default visibility to their posts.