GitHub held their flagship event, GitHub Universe 2020, just a couple of days ago and boy it was full of surprises!

In this post, I will go through all the major announcements and new features presented during the event together with some more information about them.

This is all you need to know about GitHub Universe 2020.

(Link to the video: https://youtu.be/ZOkwHxJj1oI)

Alright, let's jump into the announcements.

The first one I wanna talk about is the new Dark Mode. Yes, you've read it right... GitHub finally has its own official Dark Theme.

With this new Dark Mode, which is available in Public Beta, you will be able to change the appearance of your GitHub interface to, as the name says, a darker version

Since the Dark Mode is still in beta, not every section of GitHub is covered by this update. If you want to know more about this, you can take a look at the video I published recently about it.

This is something that has been announced a while back, and it's been in private beta with some large Open Source contributors until now, but now it's finally released in Public Beta for all the Public Repos. 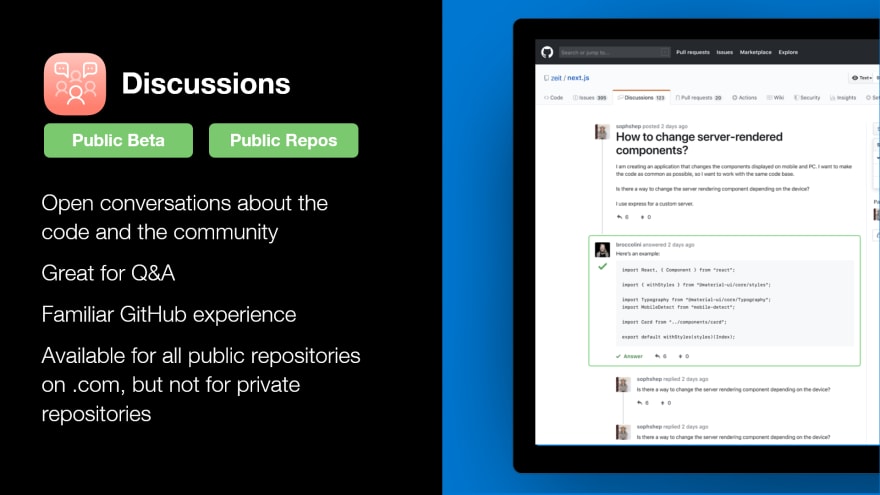 Using Discussions instead of Issues, you can have open ended, threaded conversations and discussions. One way to think about it's as a "Stack Overflow type thing", but it's much, much more than that. And it's really a place for software communities on GitHub.

It's great for QA and for building knowledge. It is also great for community managers to be able to manage conversations about where the code is going for example, or what features should happen, and, in general, all the other things that really don't belong in issues.

Super excited about this to be finally available in all the public repos. Remember, at this stage this will not be available in GHEC or on Private Repos.

Next we are going to talk about a couple of very cool new features around GitHub Actions.

First one, is the Workflow Visualization.

Essentially what this is, it provides you a visual graph of how the workflow is progressing in real time. 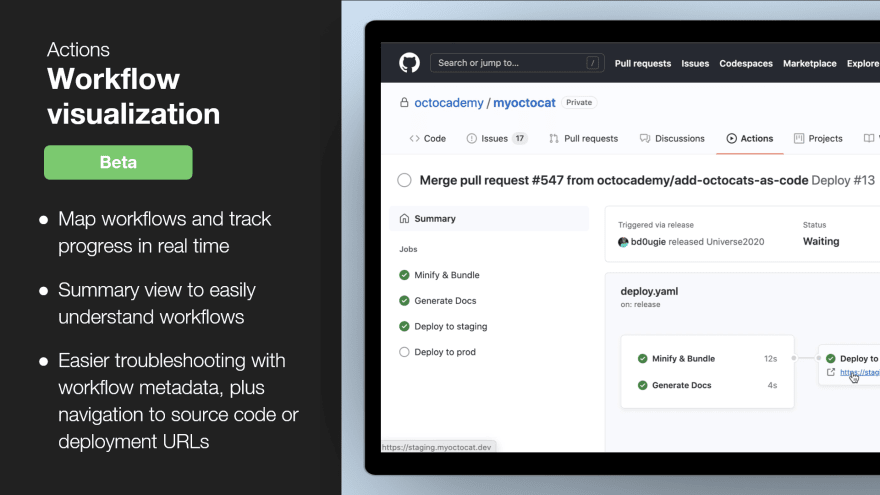 While Actions previously did that with a live logging and you could see all of the code and everything run through (and by the way that will of course still be available), this is a little simpler and can also help you identify things that are working in parallel.

There is a summary view to let you easily understand more complex workflows and make it a little easier to see how things are progressing.

And of course, this is all within the GitHub experience itself. So it means that you and your developers don't actually ever have to leave, it's easier for you to navigate to your source code or anything else that is within GitHub as well. 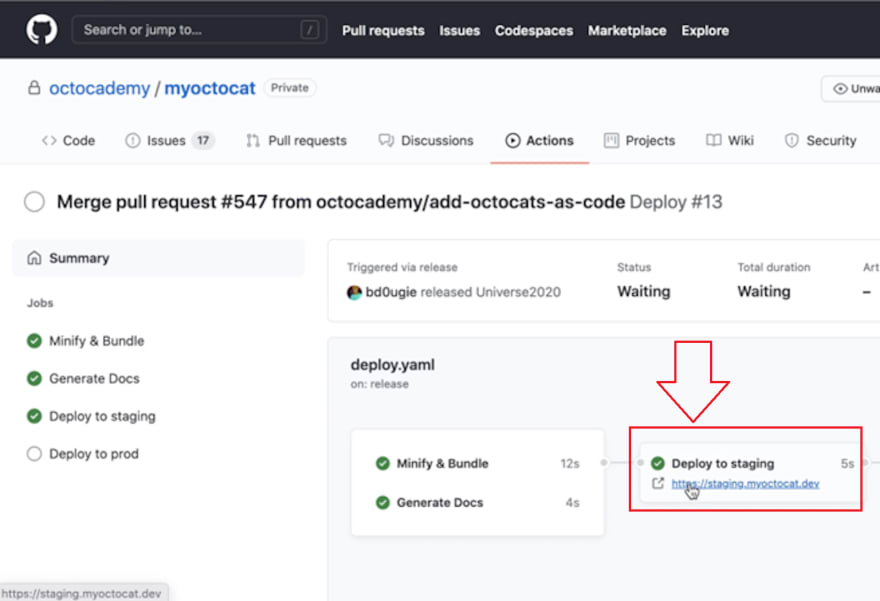 And as you can see on the right side of the image, as things start deploying, you can start navigating to the deployment URLs as well. This will open that up for you so you can see your staging environment, or wherever else you are deploying, as you go through this

This is a very cool feature. I will soon have a whole video about this so if you are interested you may want to consider subscribing to my YouTube Channel not to miss that video.

And talking about cool new features of GitHub Actions, we will finally have manual approvals! This is a feature that has been long requested and basically every organization I talked to wanted this feature to be available so to be able to control the deployment workflow. 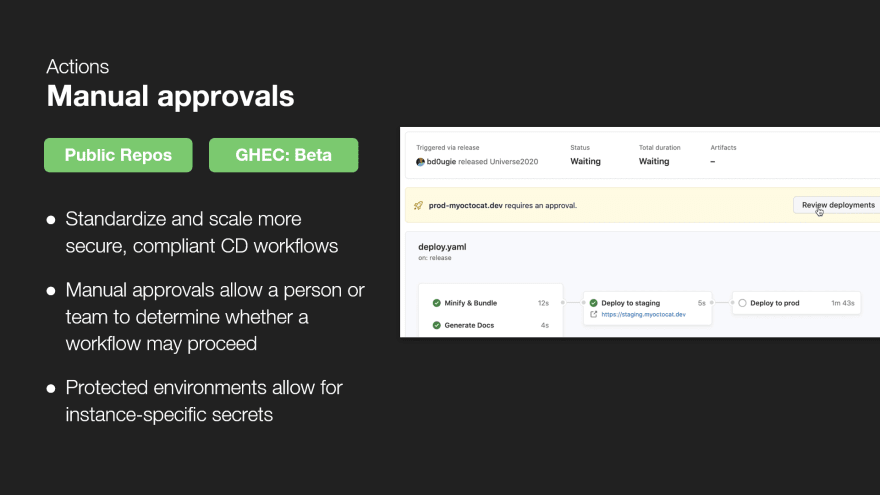 So first off, manual approvals are exactly what you think they are: this features allows either a person or a team to require their approval to move a particular deployment workflow forward.

And this is really helpful for teams which have specific security or compliance requirements, but in general for everyone who whishes to have more control over deployment to specific environments.

And not only it gives you control over the deployment, but everything is audited so you will be able to know at any moment what happened, when it happened and who did it.

This new feature will be available only for public repos and in GitHub Enterprise Cloud, unfortunately private repos in for example the Teams plan won't receive this.

Once again, stay tuned because I'm planning to make a video about this on my YouTube Channel.

Another pretty cool new feature, even tho it's somehow minor, it the ability to automatically merge a Pull Request into the base branch. 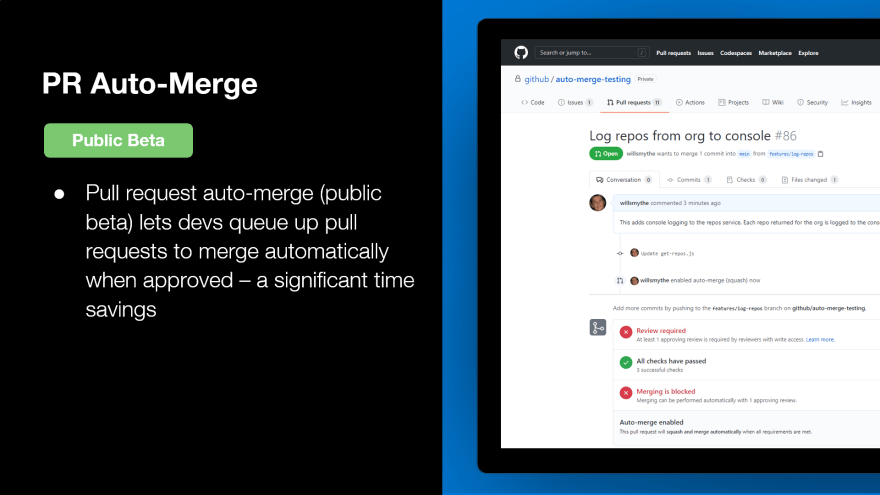 Right now when you submit a pull request on GitHub you often have to spend a lot of time waiting for approval, status checks to complete, etc. And then you gotta remember to check back in so that you can actually have the code merged. And if you forget to do that, or if you wait a day or two, sometimes even other changes come in and you have to redo your pull request.

This new feature basically lets the developer submit a pull request to a code base and mark it to be automatically merged in when approved and all the checks have passed.

Of course this is totally optional, but it is a significant time savings and improving experience. And there is a way for repo admins or org admins to disable it if they don't want their PRs to be automatically merged.

Let's now change page, and talk a little about security. The first new feature in this category is the Dependency Review.

This new feature, released in beta for the Enterprise Cloud, will automatically scan your dependencies during a Pull Request to detect if any change has been made or any vulnerable or out of date components have been added as part of that PR. 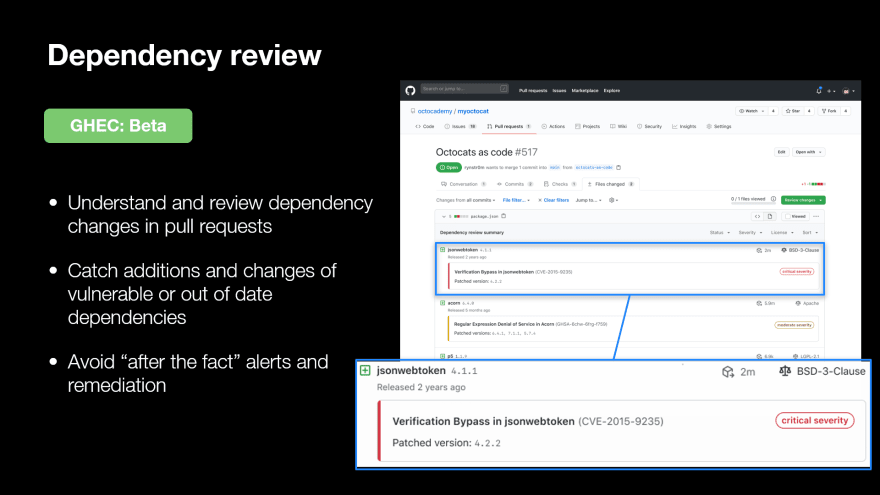 This is super important because currently developers find out about security issues in open source post-merge today, so it is basically an "after the fact" alert. With this instead everything is shifted left and teams will be able to identify those vulnerabilities as soon as possible in the dev flow.

And cool fact: GitHub, with this feature, is the first entity in the market to provide a native proactive approach for this concept.

And still talking about security, a quick word on Code Scanning.

Code Scanning is the foundation of the Code Scanning Alert feature, which allows you to detect vulnerability and security issues in your code.

The team did a terrific job in optimization, and in fact now the time Code Scanning takes to scan the repo is about 54% lower than before. And also the startup time is greatly reduced. 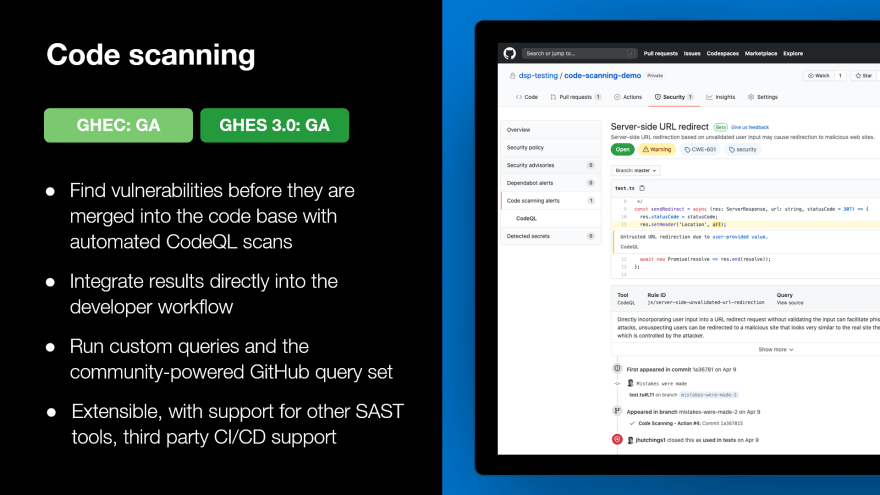 Moreover, Code Scanning has been in beta for a while and now it is finally released in GA for GHEC and will also be part of the upcoming GHES 3.0

This version will be launching on December 16th 2020 and will bring a ton of innovation in the Server space. 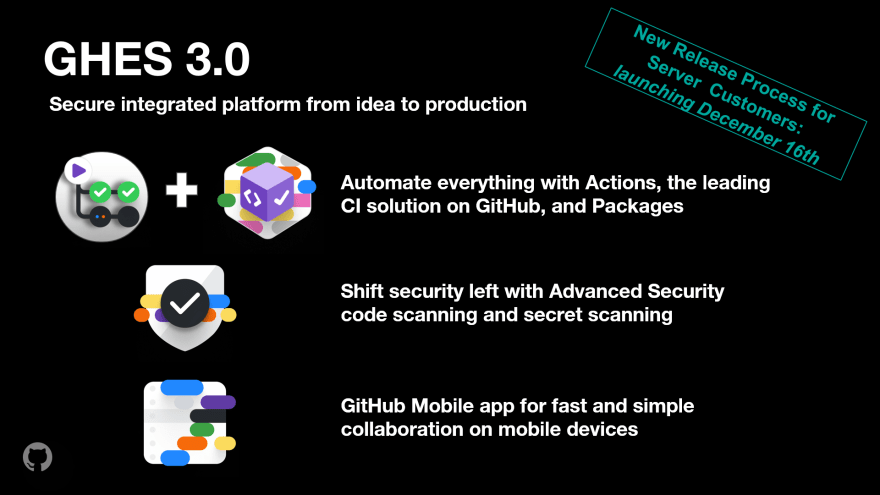 In fact, it will ship with all everyone using GitHub Server was waiting for: Actions, Packages and even Advanced Security. In fact, as we have seen a minute ago, Code Scanning will be included in the GHES 3.0 as well as Secret Scanning.

And as I've said in the video I made about the new features of the GitHub Mobile App, GitHub for Mobile is finally available for GitHub Enterprise Server as well!

This will be an opportunity for GitHub's enterprise customers to start contributing to the projects that matter to them.

GitHub has launched this at Universe with some really big names showing some great momentum behind this initiative from companies who have contributed significant dollars to open source to ensure those projects stay healthy and are able to support them over time.

Those were all the most important announcements and new features presented by GitHub at their flagship event GitHub Universe last week. As you have seen, we have some quite cool features coming, especially for Actions, Security, and the overall development community.

Let me know in the comment section below what you think about those announcements, and what is your one favorite new feature.

And check out the video about this on my YouTube Channel: CoderDave