In the last years the popularity of containers has exploded. Unfortunately, so have their security risks.

Most containers available today are vulnerable to supply chain attacks, because they can be published with just a simple API key. And if that that key leaks, it’s easy for an attacker to publish a container that looks legit but actually contains malware.

One of the best ways to protect users from these kinds of attacks is by signing the container image at creation time so that developers can verify that the one they have received is the real image with the code as it was intended to be. Today we are gonna see how we can sign our container images automatically, and host them in GitHub Container Registry.

Link to the video: https://youtu.be/OqZlKbTRWOY

About Sigstore and Cosign

So, signing a container image. There are few tools that allow to do so, but one of the most exciting one is sigstore.

Among the other things, sigstore contains a tool called cosign which allows you to sign container images.

Cosign supports several types of signing keys, such as text-based keys, cloud KMS-based keys or even keys generated on hardware tokens, and kubernetes-secrets, which can all be generated directly with the tool itself, and also supports adding key-value annotations to the signature (and we will see this in action in a moment).

But enough talking, let’s see how this works with GitHub Actions and GitHub Container registry.

First thing you need to do is installing cosign to generate the keys.

You can just go to the official GitHub repo, sigstore/cosign, click on Releases, and download the version for your operative system. 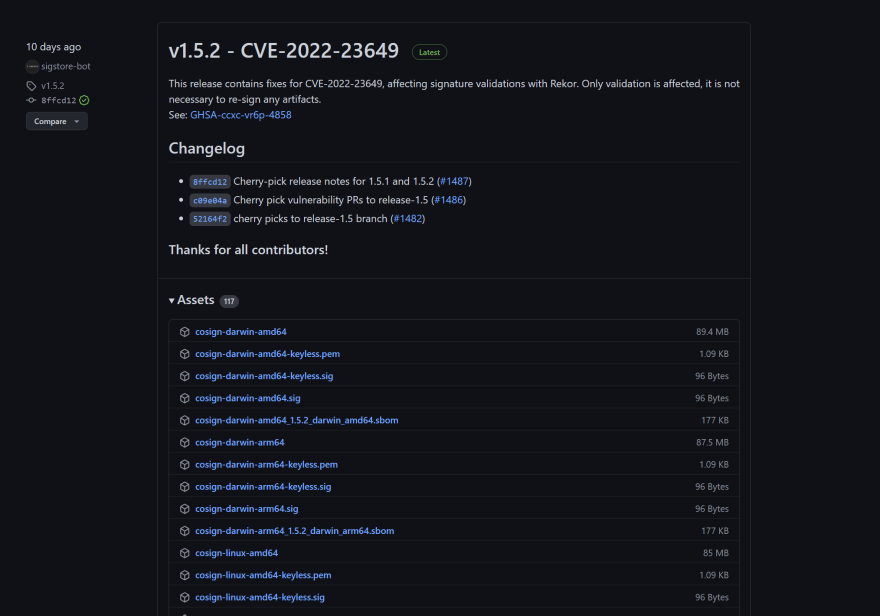 Many OSes and platforms are supported, so be sure to pick the right one.

Once you have the version which is right for you, you can just run it. It is also advisable to rename the tool, in my case the executable was called cosign-windows-amd64.exe but I’ve renamed to just cosign for ease of use.

Now all you have to do is generate a key. For this example, I will generate a static text key using the generate-key-pair command, which requires a password to create the keys.
The password can be given to the tool via environment variable

or with an interactive prompt

Unfortunately, the latest version available at the moment of recording this video has a bug which makes it crash if you try to use the interactive prompt to provide the password on Windows, as you can see below.

If you don’t want to create an environment variable, you can use PowerShell and the syntax you see below, with your password piped to the command.

In either case, this will create for you the private and public key files that you can use to sign and validate your container images.

But we can do better. As I've mentioned before, I want to sign my container images via GitHub Actions, so now I would need to create some secrets in GitHub, and copy those keys to the secret values. But the tool can do this for us directly!

For example, let’s say I want to sign images in the n3wt0n/SignedContainers repo. I can use the same command to create my keys in GitHub directly:

First thing I need to do is creating an environment variable called GITHUB_TOKEN and its value should be a PAT with write access to your repo. (Check this video to see how to create a PAT in GitHub)

Then, I can use the command we have seen before to generate the key, but this time we pass the repo as input parameter. The syntax as you can see is github://OWNER/REPONAME

As you can see, the secrets containing the password we specified as well as the private and public keys are created in our repo, ready to use.

Keep in mind that there have been instances in which the secrets were created in GitHub but their values were empty, and therefore the Actions workflow would fail. I’m not sure why that happens, but let me know if that happened to you as well. Anyway, the solution for this is simple, just try and generate the keys again or, if the problem persists, generate the keys locally and copy them manually into your secrets.

Sign a Container Image with Cosign and GitHub Actions

Alright, now that we have our keys set up, let’s see how we can sign our images from within a GitHub Actions workflow.

The first thing we have to do is install cosign. For this we can use the pre-built action, just search for cosign and you can find the cosign installer. It has a couple of parameters, but they are optional so we don’t need them for now:

It uses the private key for signing, and it needs the cosign password to access it, plus of course we have to specify the full image name, with the registry name as well.

As you can see tho, the command needs they key to be in a file, while we currently have it on a GitHub secret.

The workaround for that is to add another task before the sign command, which reads the key from the secret and writes it to disk:

___ I don’t much like it___, so I would prefer having a cosign implementation that can read it from the secret directly.

We can now commit and run our workflow. After a few seconds, the process is completed and we can see that our image has been successfully signed.

As I’ve mentioned the step to write the key on a file to give it to cosign is quite a workaround, and it may pose some security risk especially if you do it on self-hosted runners. Hosted runners are disposed as soon as a Job finishes so it “should” be ok.

In more secure scenarios, like enterprise ones, I would recommend saving those keys in services like Azure KeyVault, Hashicorp Vault, AWS KMS, or similar to avoid this issue.

Good thing is that cosign supports reading the keys from those services directly.

If you want to see the full YAML of the workflow, check it out here on GitHub

To verify the authenticity of the image, we can use the cosign verify command.

We just need to pass to it the public key file, and the name of the image we want to verify, and that’s it.

If, for comparison, we try to verify an image that hasn’t been signed with our key, we will get this error:

And this of course will happen also if the image has been changed or modified after we have signed it, so our users can be safe and trust the image if the signature is verified.

Add Annotation to a Signature

We have said before that cosign also supports__ adding key-value annotations__ to the signature. Let’s see how we can do that. Let’s say that for example I want to sign an image and also add some author metadata to it.

Since I’m running this locally this time, I will need to first login into the container registry.

Then, I can use the usual command cosign sign, but this time I use a -a flag, which stands for annotation, to add some key value pairs to my image.

In this case I’m adding author=CoderDave, but it can be anything and you can add multiple values as well just adding more -a parameters.

After doing that, we can use the cosign verify command as we have seen before, and it will show also the annotation I’ve added to my image.

The annotations feature can be pretty useful. For example, if you are running the signing process in GitHub Actions like we have seen before, you may want to add information about your repo, workflow run, etc to your signature to make it more complete.

Cosign and its process works fairly well, as we have seen, but setting it all up is not very immediate. Well, once again GitHub made it simpler for use to get started.

As you can see in the extract above, taken from the actual starter workflow, there is no key specified in there.

This is because Actions supports other 2 tools which are part of sigstore: Fulcio, which is a root CA that issues signing certificates from OIDC tokens, as well as Rekor, a transparency log for certificates issued by Fulcio.

Thanks to these, you can sign your container images with the GitHub-provided OIDC token in Actions, without provisioning or managing your own private key.

It is important to note that with this keyless signing process, your username, organization name, repository name, and workflow name will be published to the Rekor public transparency log. This is the right choice for public repositories, but probably not for private repositories. And in fact GitHub has disabled this in private repositories by default to prevent potential leaks.

What do you think about signing your container images, and especially doing so with cosign, GitHub Actions, and the GitHub Container Registry? Let me know in the comment section below.

Also, check out this video here in which I have 3 steps for you to make your Docker Image build faster.