Data Structures is one of the most frequently tested subjects by a lot of companies. It is the base of IT industries and is largely used in the areas of Artificial Intelligence, operating systems, graphics, etc.
In this blog post, I will cover the seven most used JavaScript data structures that every JS developer should know.

What is Data Structures?

Data Structure is the way of storing and organizing the data in such a way that it can be used efficiently. More precisely, Data Structure refers to a group of data values, how they relate to each other, and the operations or functions that can be carried out on them.

Data structures= group of data values+allowed operations on that data.

Data structure enables us to manage and utilize large datasets, handle multiple requests from users at once, and speed up the data processing.

Types of data structures in JS:-

Arrays are the most basic data structure. It is a group of similar types of elements stored together at contiguous memory locations and each cell has a corresponding numeric index used to select its data. Like all scripting languages​​, JavaScript has dynamic arrays i.e their size is not predetermined, nor the type of data. 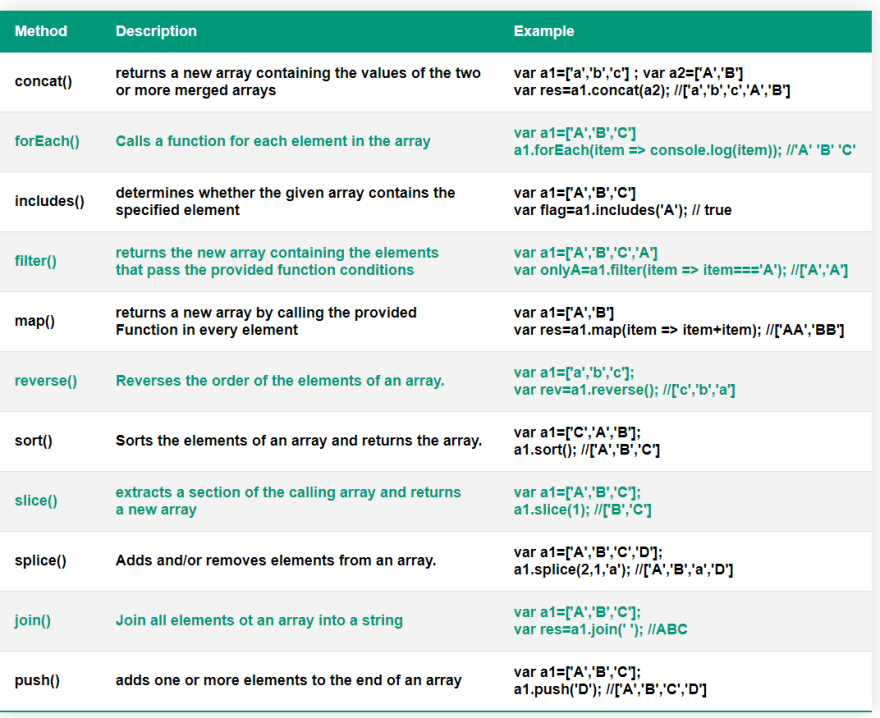 The linked list is a linear data structure in which elements are not in contiguous memory locations. It consists of a group of nodes and each node has its own data and address to the next node. In an array, the elements are indexed and you can instantly get to an element but in a linked list, you have to start with the head and work your way through until you get to the desired element. The advantage of the linked list is that the insertion and deletion in linked list are easier than array, as the elements in an array are stored in a consecutive location. Also, its memory consumption is efficient as the size of the linked list can grow or shrink according to our requirements. 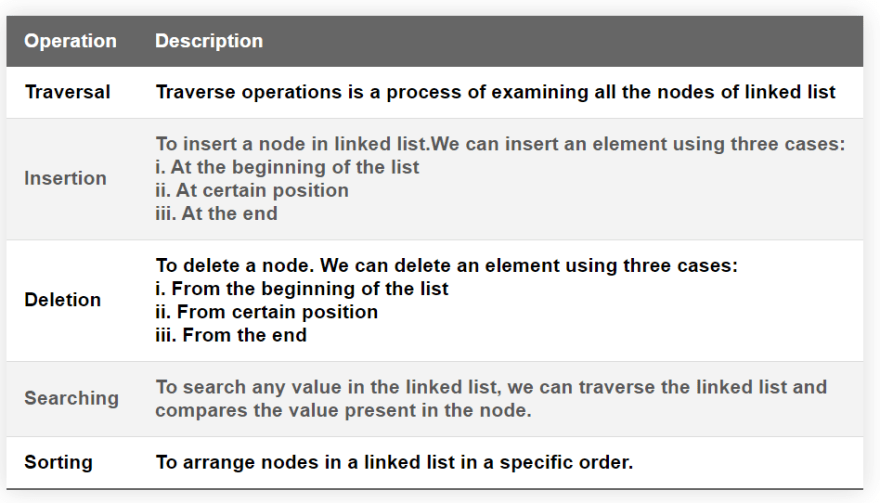 Check the implementation of the linked list in JS here 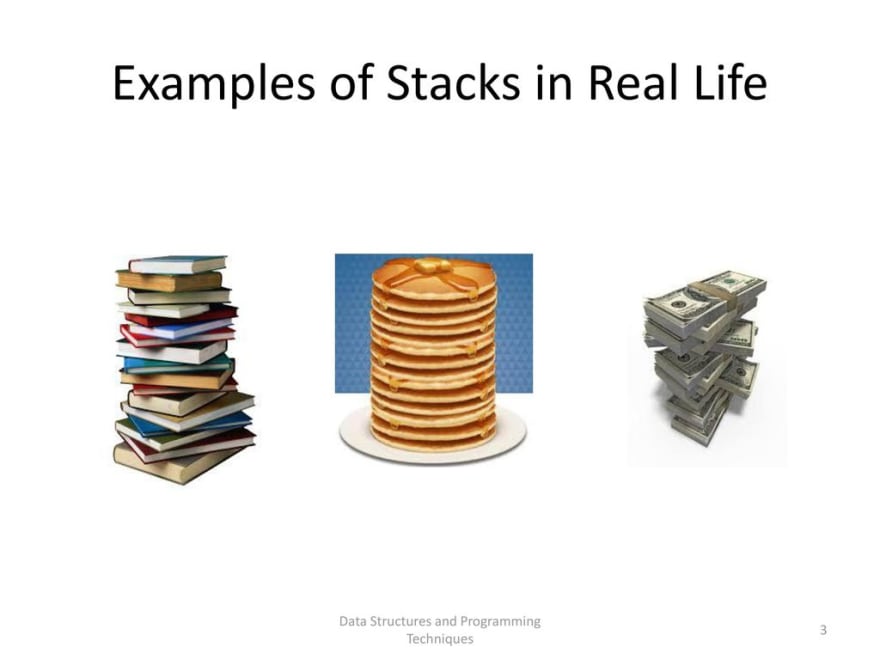 Common operations implemented on the stack:- 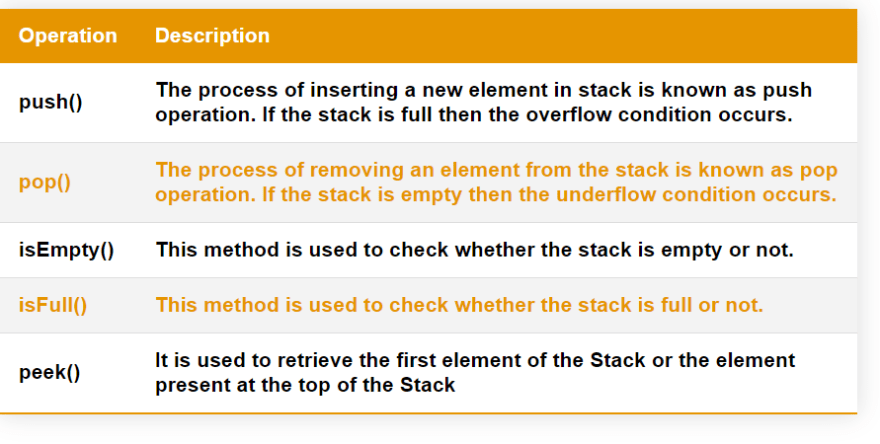 Check the implementation of stack in JS here.

Queue is a linear data structure that follows the FIFO(First In First Out) principle. It contains two-pointers, 1) front pointer, 2) rear pointer. The front pointer contains the address of the starting element and the rear pointer contains the address of the last element of the queue. The two main methods used for the implementation of the queue are the enqueue and dequeue method. Enqueuing is the process of adding an element in the queue and dequeuing is the process of removing an element from the queue. 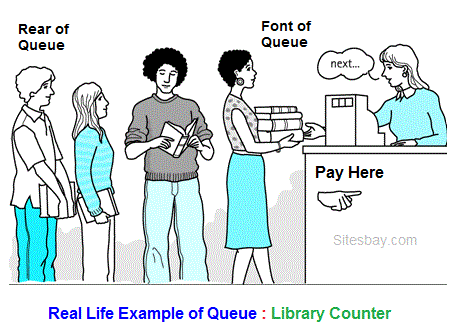 A queue is an object that allows the following operations-

Check the implementation of queue in JS here.

The tree is a non-linear hierarchical data structure consists of nodes connected by edges. Each node contains some data and the link of other nodes that can be called children. The topmost node of the tree is known as a root node. Nodes with linked child nodes are called internal nodes while those without child nodes are external nodes(leaf nodes).
There are a number of different types of trees:-

Binary Tree and Binary Search Tree are typically the most often used. 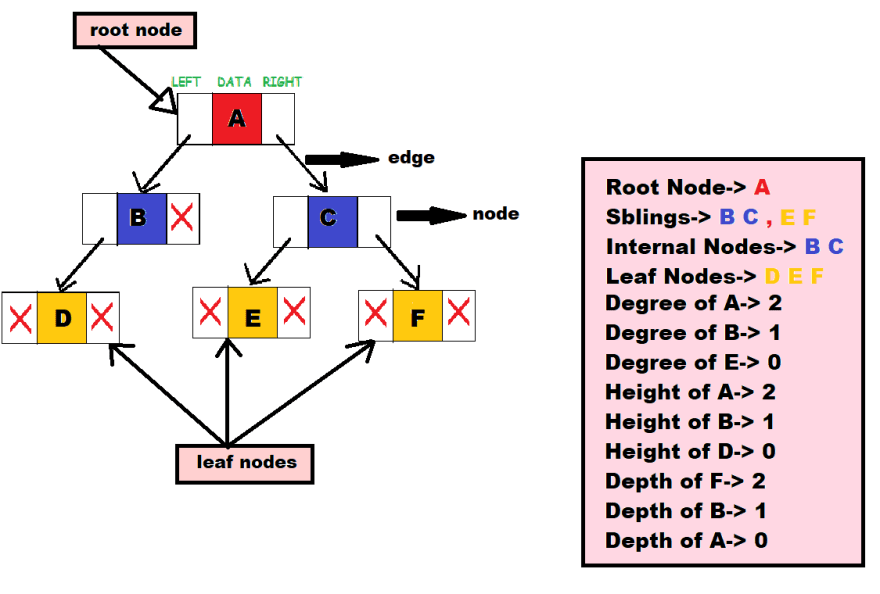 Check the implementation of tree in JS here.

A graph is a common data structure consists of a finite set of nodes and edges. A graph can be seen more like a network. The interconnected objects are represented by points known as vertices, and the links that connect the vertices are called edges. A vertex is just similar to the linked list nodes and the pair (x,y) referred as an edge which means that the x vertex connects to the y vertex. The graphs can be represented using an adjacency matrix or adjacency list.

Graphs are the ultimate abstraction for many real-world problems. Some of the best use cases for Graph Data Structures include Social Graph APIs(like LinkedIn, Facebook, etc.), Path Optimization Algorithms(like Google maps), Web Analytics and Scientific Computations.

There are two common types of graphs:- 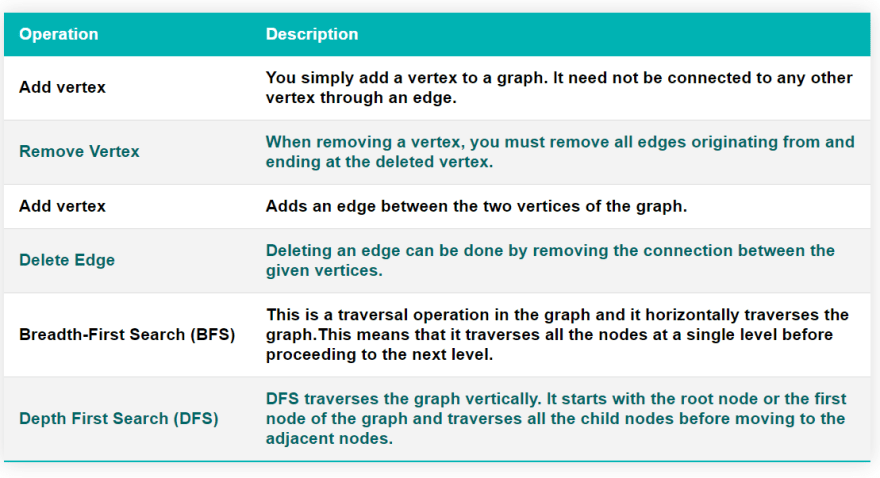 Check the implementation of graph in JS here.

Hash Table(also called a hash, hash map) is a data structure that stores the data in an associative manner using hashing. Hashing is the technique of mapping keys, values into the hash table by using a hash function. Here “key” is a searched string and the “value” is the data paired with that key. By using a good hash function, hashing can work well. In the hash table, the insertion and search operations are very fast irrespective of the size of the data. Hash tables are built using arrays. 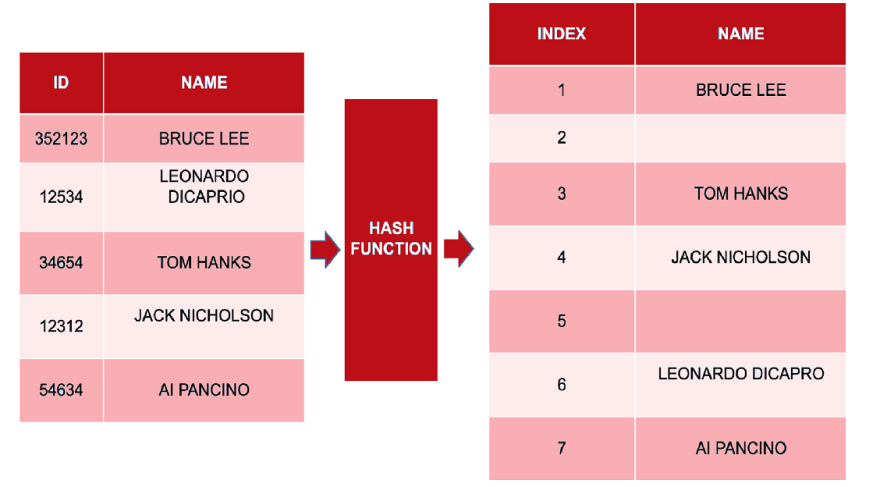 Real-life examples of the hash table:-

Insert:- inserts an element in a hash table.

Delete:- Deletes an element from a hash table.

Search:- Searches an element in a hash table.

Check the implementation of hash tables in JS here

For many developers and programmers, data structures are most important for cracking Javascript coding interviews. Each data structure has a number of different applications and uses. So, having a basic understanding of data structures is a critical first step to becoming a good programmer.

In this blog, we have just scratched the surface of data structures in JavaScript. If you enjoyed learning and find it useful please do like and share so that, it reaches others as well 🤝

I would ❤ to connect with you at Twitter | LinkedIn | GitHub
Let me know in the comment section if you have any doubt or feedback.

Check out the JavaScript Algorithms and Data Structures repository on GitHub. It has a collection of classic algorithms and data structures implemented in ES6 JavaScript with explanations and links to further readings and YouTube videos.

Once suspended, nehasoni__ will not be able to comment or publish posts until their suspension is removed.

Once unsuspended, nehasoni__ will be able to comment and publish posts again.

Once unpublished, all posts by nehasoni__ will become hidden and only accessible to themselves.

If nehasoni__ is not suspended, they can still re-publish their posts from their dashboard.

Once unpublished, this post will become invisible to the public and only accessible to Neha Soni.

Thanks for keeping DEV Community safe. Here is what you can do to flag nehasoni__:

Unflagging nehasoni__ will restore default visibility to their posts.