Thanks to the Panel library from HoloViz (previously PyViz), it’s now relatively simple to create an interactive dashboard of plots in Python, similar to an R Shiny app. This is a short tutorial-by-example that walks you through a very basic dashboard, created in a Jupyter Notebook.

TL;DR: See the dashboard which includes a button to view all the code

Using a small dummy data set of animal ratings data, the interactive dashboard will allow the user to choose an animal and view a box plot & data table for the ratings for that animal. 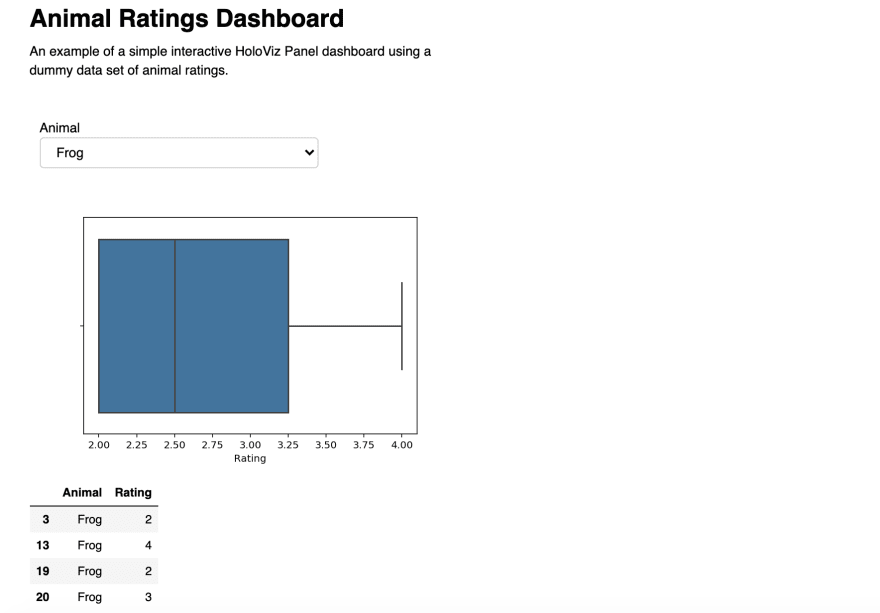 I’m not going to spend much time explaining individual lines of code or underlining mechanisms, as my intention is to provide a very quick and simple end-to-end deployable example that can be copy-pasted to get you started, rather then getting bogged down and confused in abstract details that you may not be interested in yet. You can then build your knowledge from there by playing around with this sample code and improving on it using the HoloViz documentation and other tutorials.

Many python users will be used to using pandas, matplotlib and seaborn, but the new elements for the interactive dashboard are:

You may have to install these if you’ve not used them before. (In Jupyter Notebook, I used !pip install param etc)

The first step for creating a dashboard is to create a class containing the data elements that will appear in the dashboard. In this case, the elements are:

This class can be called anything you like. I called it RatingsDashboard. A more meaningful name such as DashboardDataElements may have been more representative but thats quite a long name.

The dashboard will contain more than the 4 things defined in this class, but those other things are not data-specific (e.g. dashboard title and description) and so will be defined outside of the class, later.

It’s important to note that any plots should be closed before they’re returned. E.g: plt.close()

If you forget this step then the plot may not update when the user chooses a different animal in the drop down.

Also, the plot’s figure (not the axis) should be returned.

return ax will not display the plot when the dashboard is displayed.

(I learnt this the hard way and had to post on StackOverflow to resolve the issue.)

The next step is to create an instance of the class. I called it rd. This will be used in the next step to access the data-related elements within the class when the dashboard layout is defined.

pn.Column is just one way of doing this. If you’d like to explore more layouts, there’s also pn.Row, pn.Tabs and more. I wanted to keep it simple for this beginner’s tutorial so chose a single column, which also has the added advantage that the dashboard will be more readable on a mobile device.

The easiest way to display this dashboard is to just type it’s name, like you would for a data frame or another variable:
dashboard

Use dashboard.embed() to embed the data with the dashboard. I used this as follows:

max_opts = 5 is used so that all 5 animals are available in the drop down widget. If this parameter wasn’t defined, and the brackets were empty, the default of 3 would be used and only 3 of the animals would be available to choose from in the drop down. The default is probably low for performance reasons, since the data is being embedded. More info on this function and its parameters are in the ‘Deploy and Export’ section of the user guide. 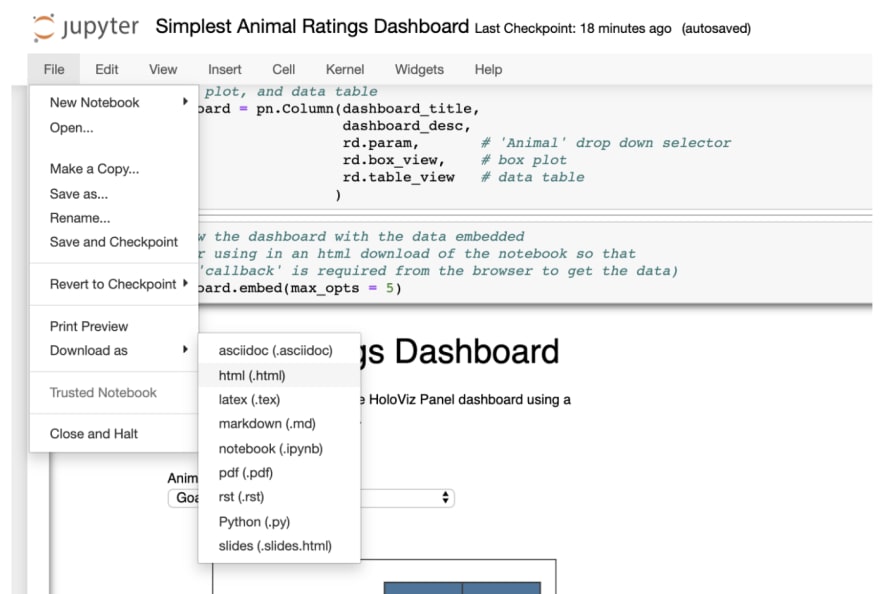 When you share the html version of your Notebook, it will display the code as well as the dashboard. If you want to hide the code by default but make it possible for the user to view the code if they wish, then you could add a Show Code / Hide Code button with some JavaScript.

To add this button and hide the code by default, create 2 new cells in your Notebook, one at the top (the very 1st cell) and one at the bottom (the very last cell) and make both cells of type Raw NBConvert:

In the top cell, copy-paste the following code:

In the bottom cell, copy-paste this:

This includes an attribution to the GitHub account of the person (Chris Said) who created this code.

That’s it! That’s all you need to create the interactive dashboard and deploy it as html!

If you wanted to add another plot you just need to:

…and as long as the plot uses the subset of code based on the selected animal, the new plot will also update along with the original plot, whenever you choose a new animal.

The complete code and dashboard can be viewed at https://foxnic.github.io/simple_dashboard.html

Other python (and R) code examples created by me are on my Projects page.

The HoloViz Panel website contains a gallery of examples with code, as well as a Getting Started guide and User Guide which includes a section on how to customise the style of the dashboard.

I discovered this functionality thanks to the following YouTube videos:

Answer: What is the difference between pip and conda?

Once suspended, nicfoxds will not be able to comment or publish posts until their suspension is removed.

Once unsuspended, nicfoxds will be able to comment and publish posts again.

Once unpublished, all posts by nicfoxds will become hidden and only accessible to themselves.

If nicfoxds is not suspended, they can still re-publish their posts from their dashboard.

Once unpublished, this post will become invisible to the public and only accessible to Nic Fox.

Thanks for keeping DEV Community 👩‍💻👨‍💻 safe. Here is what you can do to flag nicfoxds:

Unflagging nicfoxds will restore default visibility to their posts.