The code of this post can be found on Github (see here).

As stated in previous posts our project can now be downloaded from Github and installed via pip locally. But Python packages are usually installed from the Python Packaging Index (PyPI) with a simple name easy to remember.

So how do we release our project so others can download it conveniently? We make sure that our main line is in a releasable state and then we

1. Git Tags and Release at Github

Depending on the kind/size of a project developers use Git branching workflows when working as a team but for smaller projects it's sufficient to work on the main line and create only branches when introducing features that might affect the stability of the project. This way we keep the main line always in a releasable state.

Then we can then make a new release as we gathered enough fixes/features. Developers pick either semantic versioning or calendar versioning as versioning scheme. We use the former and call our first release v0.1.0. We point to the commit we want to release by tagging it.

We can use lightweight or annotated tags which contain extra metadata. I like to use lightweight tags. The git tag command tags by default the last commit. We can also tag older commits when specifying the commit ID (example: git tag v1.1.0 c52e686). In this case we will tag the last commit and push it into the remote repo.

Now we browse our way to the Github repository and create a release. We go to Releases 🠲 Create a new release, and type the tag we wanna release. We can add binaries if we release projects which use compiled languages or write release notes. I like to document the changes of the release in a CHANGELOG.md file. 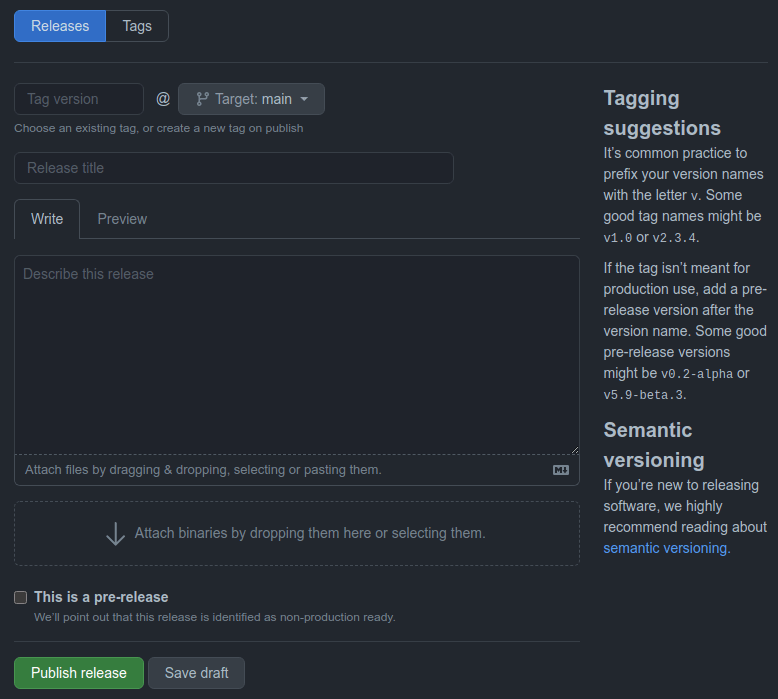 At last, we publish the release. In the next section we will package our project and publish it at the Python Packaging Index (PyPI).

The generated files can be found within the dist directory. Now we have to register at PyPI before we can upload our project. For testing purposes it's convenient to upload the project to TestPyPI first. So, let's do that.

And now that we are sure that everything works, it's time to upload things to PyPI.

Keep in mind that you can upload a specific semantic version just once to PyPI, thats why it's important to test uploading the version when just starting out the deployment process for a new project. Otherwise you have to bump the release version up and repeat the process (in that case the world will not end either).

Both processes (Github release and publishing at PyPI) can be automated using Github actions. The automation here is not that powerful for a project of this size but still I REALLY like Github actions and wanna let keep you in mind how nice it is! 😀

The instructions for the workflows are stored as yaml-file within the .github/workflows/ directory of the project. Tags can be automatically released using the github action gh-release.

As you can see each major, minor or patch tag increment will create a new release.

At last I wanna show you a more powerful workflow for uploading releases automatically to PyPI.

To store the credentials open your repository on Github and then go to settings 🠲 secrets 🠲new repository secret then type in the name (for instance PYPI_USERNAME) and its value.

Ok, I hope this post had some value to you. I wish you all a great day! 🤠

30 knowledge base tools for developers in 2022

Productivity Tips For Developers And Programmers Working From Home

Once suspended, niklastiede will not be able to comment or publish posts until their suspension is removed.

Once unsuspended, niklastiede will be able to comment and publish posts again.

Once unpublished, all posts by niklastiede will become hidden and only accessible to themselves.

If niklastiede is not suspended, they can still re-publish their posts from their dashboard.

Once unpublished, this post will become invisible to the public and only accessible to Niklas Tiede.

Thanks for keeping DEV Community safe. Here is what you can do to flag niklastiede:

Unflagging niklastiede will restore default visibility to their posts.