This is part 7 of the multi-part series "The Evolution of a Script". The code of this post can be found on Github (see here).

In this post I wanna talk about a few dimensions of how to document a project in the python world. This makes it easier for the user or fellow developers to understand the project as a whole or separate parts of it. We will start at the lowest level and move toward higher abstraction levels.

1. Clean and Self Descriptive Code

The lowest level of documentation is the code itself. The goal is to create readable and reusable software. This can be achieved by adhering to a few principles:

Docstrings are string literals which occur as first statement in a function, class, method or module definition. The docstrings become the __doc__ special attribute of that object. They're used to explain the general purpose of an object whereas comments explain smaller parts of the code. Comments are used to explain non-obvious portions of the code. Docstrings are surrounded by """triple quotes""" and divided into one-line or multi-line docstrings whereas comments starts with # at the beginning.

There are many docstring formats available. Most commonly used are NumPy, PyDoc and Googles docstring style. It's a good idea to stick with a format which supports the Python documentation generator Sphinx. This generates a part of your documentation automatically from your docstrings. The last section of this post will show how to generate and host documentation with Sphinx and readthedocs.

A convenient VSCode extension is the Python Docstring Generator to facilitate the creation of docstrings.

It detects parameters automatically and you just have to fill out the marked fields. It uses the Google style by default.

Another source of documentation is available if the project has a Git history. A good git history gives you information about the reason for each code change. You can supercharge the git capabilities of VSCode by GitLens and you will see each commit message next to the code it was committed to.

Furthermore, I like to use gitmoji to make the reading of my commit messages visually more appealing and force myself to commit only code changes which fall into one category of the gitmojis.

A nicely written README is the first document the visitor of a project will see. Here's a screenshot of THELOUNGE, an IRC client for self-hosting: 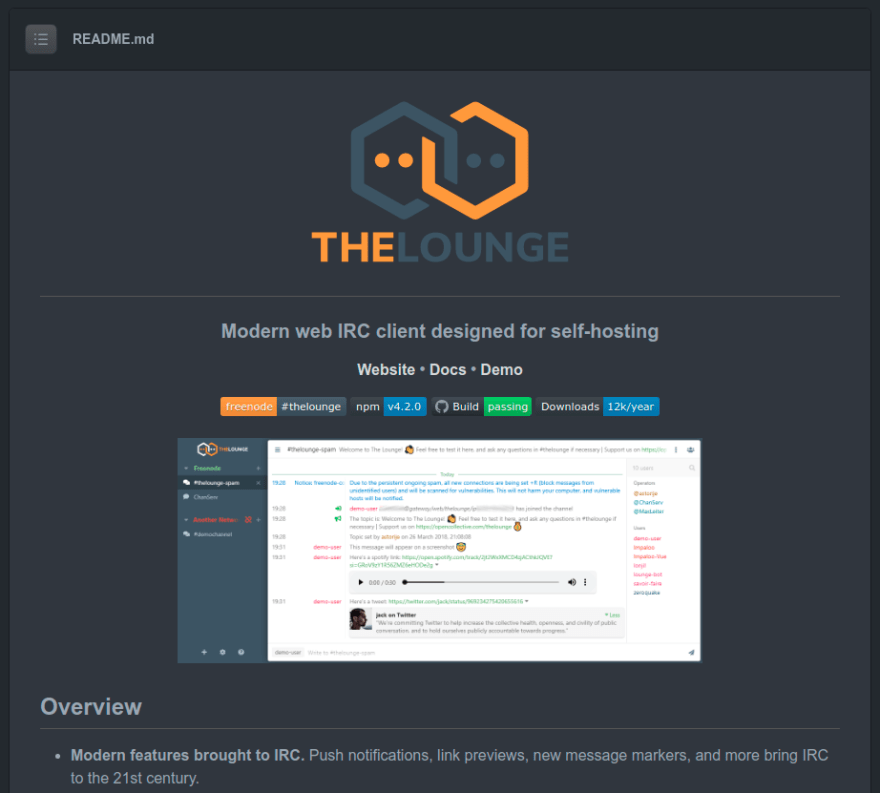 What a beautiful README! What does it make so good?

Often README files also contain instructions for the installation or a tutorial on how to use it. The READMEs file format is .md (markdown) or .rst (reStructuredText). Sometimes it's also a good idea to provide examples to the user for certain, common use cases. Projects with a data scientific background tend to use jupyter notebooks (.ipynb) to demonstrate the capabilities of the project. Other projects use plain python files for demonstration purposes.

For smaller projects the README.md can be sufficient whereas projects like libraries benefit from a more extensive hosted technical documentation. I will show you here how simple it is to create your own freely hosted documentation with Sphinx, readthedocs and Github Pages!

OK, let's create some documentation! Sphinx is the tool that will help us to simplify this process.

Sphinx will ask us a couple of questions:

To create the documentation we have to use the make html command within the docs directory. This creates the HTML of our documentation.

If we open the index.html file with the browser via live server we can see how it will look like. But its appearance is pretty puristic yet. Therefore we use the popular RTD theme to give it a professional look. We install the theme...

...and customize the conf.py file. We add the following lines:

Now it looks way better! Ok, next we wanna write some more content. The documentation should be written in the reStructuredText (.rst) syntax. Here's a nice cheat sheet. A .rst previewer in your IDE will speed up things. I've added some documentation about tinyHTTPie, see index.rst, install.rst and tutorial.rst. The last step is to publish our documentation. We have to register at readthedocs.org and let it hook our repository.

Voilà! A nice documentation was created! I hope you see how easy it is to setup such a good-looking documentation and that documentation has so many interesting aspects we're typically not aware of! 😃

Once suspended, niklastiede will not be able to comment or publish posts until their suspension is removed.

Once unsuspended, niklastiede will be able to comment and publish posts again.

Once unpublished, all posts by niklastiede will become hidden and only accessible to themselves.

If niklastiede is not suspended, they can still re-publish their posts from their dashboard.

Once unpublished, this post will become invisible to the public and only accessible to Niklas Tiede.