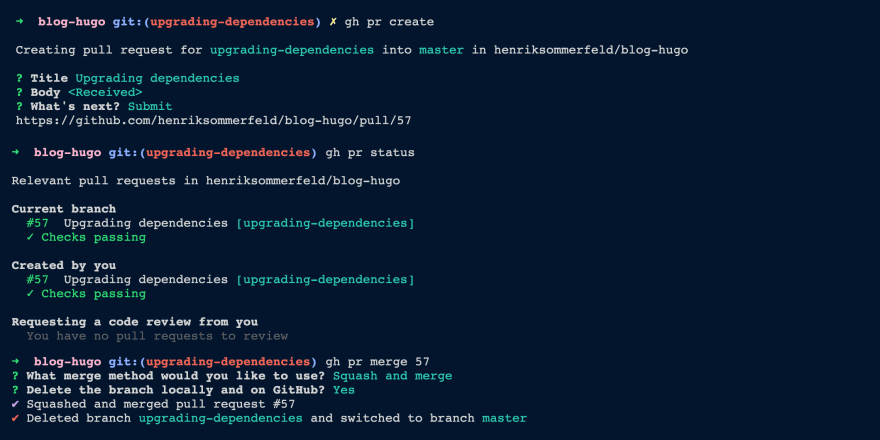 In terms of making code changes to my Hugo site, I'll focus on the JavaScript parts, since Hugo templates and CSS isn't much to talk about. I use a few libraries that I've installed with npm and those need to be processed before they are sent to the browser. The JavaScript code I have written myself, does not have that requirement. In that case it's just a matter of how old browsers I want to support.

So, by splitting libraries (installed through npm) from my own code, I'm able to rely solely on Hugo's file watcher with live reload. For development (using hugo server), the libraries are built once, and the file with custom code is served to the browser as is. I use Browserify for the libraries and that's good enough for my needs. If you need something more powerful, you might consider Victor Hugo that comes with Webpack preconfigured. I could also have referenced the libraries directly from a public CDN, but that would make it harder to see when there's a new version of a library and more importantly – my site wouldn't work on localhost without an Internet connection.

For the "production build", I just minify the code and concatenate the libraries with my custom code into a single file. I use Babel from within the Hugo template (available since Hugo 0.70) which removes the need for yet another npm script.

When doing code changes I always create a new branch in Git. As I described in the previous post, anything pushed to master is automatically built and deployed (if build is successful) to the live site without any tests. By creating a pull request and using GitHub Actions, I can feel confident that I haven't broken anything when the checks are green.

These are the steps:

When I create a pull request, either through GitHub's web interface or preferably by using their CLI (gh pr create), two things happen. (1) Netlify deploys a preview of the site (canary release) and (2) GitHub Actions runs my Cypress tests against that deployed site.

Since both building + deploying a site and installing Cypress to run the tests take some time, it's great that it can run in parallel. The yarn install run in GitHub Actions is typically done before the canary release is deployed by Netlify, so I use an action that waits for a 200 response from Netlify and then run the tests. Super happy with this setup!

As you can see from my workflow file above, I get a notification in Slack (I have a personal workspace) when the canary release is deployed and when a Lighthouse audit is completed (after the Cypress tests). If I've made changes to the look and feel (like a CSS change), I naturally take a look at the deployed canary release, but if not, I'll just go ahead and merge (which triggers a deploy to the live site).

One thing to say about the Lighthouse audits is that they are of questionable value for the canary releases. The performance score is always lower on the first page load, so you need to load at least two pages to get a fair result. Secondly, the SEO score won't say much since the canary release is purpously blocked from indexing and has a different URL than the canonical URL set for the site. For this reason, I run a Lighthouse audit on the live site as well. In this case I can't wait for a 200 response, so I'll just wait a bit longer than a deploy normally takes and run the audit after that.

The Slack notifications from a "production deploy" looks something like this: 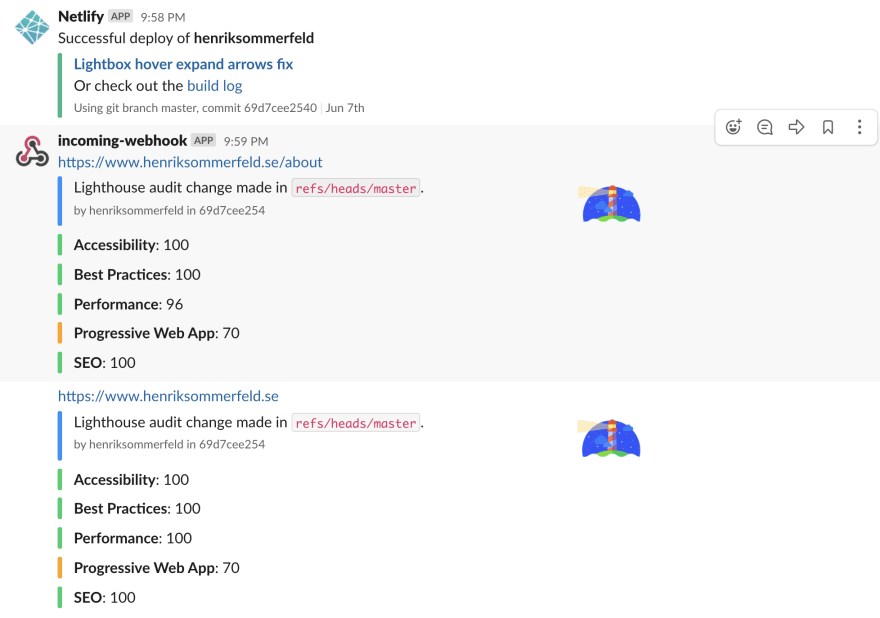 Once suspended, p4lm will not be able to comment or publish posts until their suspension is removed.

Once unsuspended, p4lm will be able to comment and publish posts again.

Once unpublished, all posts by p4lm will become hidden and only accessible to themselves.

If p4lm is not suspended, they can still re-publish their posts from their dashboard.

Once unpublished, this post will become invisible to the public and only accessible to Henrik Sommerfeld.

Thanks for keeping DEV Community 👩‍💻👨‍💻 safe. Here is what you can do to flag p4lm:

Unflagging p4lm will restore default visibility to their posts.