I haven't written in a while as life got a little busier than I would like.

First and foremost, a re-cap about me:
I am a self-taught web developer, who started learning to code in October 2018 while still working as Nanny.

Now, to the topic.
I have been using Twitter since January 2019 to connect to the Tech Community. Tech twitter is full of great people and I meet some nice devs, found out about events and learned about new learning material.
But didn't feel confident enough to look for a job.
Until February 2020 it is.

I had around 450 followers, and one morning I was like: Let's put this out there: 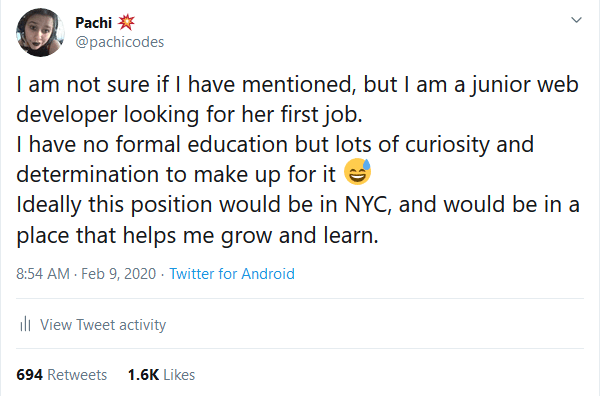 As you can see, I got WAY more re-shares and likes than I dreamed and doubled my followers with that one twitte.

If you ask me I think that what helped me was my authenticity on my twitter since I started it, and on the one Twitte I was honest and straight to the point, so the right people would get me.

How about the job?

With that Twitte I got some connections, several links to apply for jobs and people asking me to share their stuff lol
To be honest, most of the people that said: "hey I will give your contact to ABC" were nice, but ABC never reached out lol And that is OK, I only needed one job after all.

It was 2 days after, that I got a message on Linkedin from a very nice guy, saying that he found me on Twitter and he found my post interesting and would like to know more about my current set of skills because he had a company that develops software.

Since I was working at a daycare (still am actually), after we chatted for a bit, he offered me a part-time gig and of course, I said YES!
After working as a web dev part-time (and the other part of the time at a daycare) I just knew that I had to do it more, so I asked him if he could give me more hours. Again, he said yes and I gave my notice at the daycare where I shall work until the 27th of March (no, Corona didn't close it's doors so far) and on March 30th I will start my first FULL jr. Web developer position.

-Our Tech Community is pretty great, and if you are an introvert like me, Twitter and Dev.to are great places to start the scary Networking.

-Be Authentic, be you. Make clear your Twitter is a tech place yet that you are a person. Ask for help when needed, share helpful things and give others shout outs when they post something cool.

-You never gonna be ready for that first job, but at some point, you will feel like you had done too many tutorials/courses/ projects and wonder how it is to do it as a job lol Then that is t, put yourself out there. Remember, all you need is ONE job.

That is all I have for today, now go wash your hands and follow me on twitter.
@pachicodes
Liquid error: internal

Trending on DEV
Wow can python do that?
#python #beginners #career #webdev
Data Structures & Algorithms: The Evergreen Duo
#programming #codenewbie #beginners #tutorial
At 42 I landed my first full-job as a junior web developer.
#motivation #career #webdev #codenewbie
Why Should Developers Blog?
#career
Five Git commands I started using that might be helpful to you
#git #productivity #codenewbie
OS / How I made my first PR to DEV as a code newbie
#opensource #codenewbie #tips #firstyearincode
I have a Portfolio now 👨‍💻🎉
#showdev #career #gatsby #webdev
Hey you, talk about your side-projects!
#career #sideprojects