From a DevOps perspective, I can only say what a time to be alive! With the rise of containers all the pain we had with setting up VMs, backup/restore procedures, dynamic provisioning because of scaling because of increased usage volume because of unoptimized architectural setup because of, etc. Everything is gone (well, almost everything from the above list) with a single docker-compose file or a convenient one-liner like helm install my-app.
But, what are containers essentially, and how does Docker work under the hood?

This will be a series describing my journey writing a small, experimental container runtime in what other language than the one perfect for the job — Rust!

Part 0 describes the system features of the Linux OS that Docker and other tools utilize to start a process that is isolated and protected or, in other words, a container. The whole series is based on Linux containers, so any occurrence of the word container is interchangeable with “Linux container”.

The full source code for this post can be found here.

When being asked to describe, with as few words as possible, what a container is, most developers feel disappointed. Described with one tech word, it’s a forked or cloned process. It has a dedicated PID, it’s owned by a user and a group, you can list it with the ps command and send signals to it (yeah, signal #9 too). It’s nothing more than that, nothing super fancy bleeding edge around it, just an old-fashioned process.

But how is it isolated from the rest of the system?

The answer is namespaces.

Namespaces provide the logical isolation of resources for processes running in different sets of namespaces. There are different types of namespaces, for example, MOUNT namespace for all mount points that the current process can see, NETWORK namespaces for the network interfaces and traffic rules, PID for the process tree, and so on. Two processes running in different PID namespaces don’t see the same process tree. A separate NETWORK namespace gets its own network stack, routing table, firewalls and a loopback interface. Two processes with different network namespaces that bind to their respective loopback devices are bound to a separate logical interface so that traffic doesn’t interfere between them. 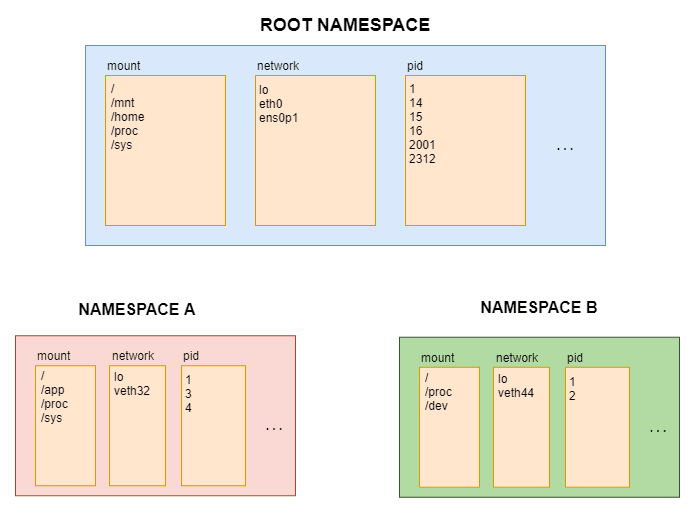 Each process has a /proc/PID/ns subdirectory on the host containing symlinks for each namespace they belong to (pid, net, user, cgroup, …). If two processes belong to the same namespace, their symlinks will be the same.

Let’s see what namespaces a simple sleep command has (on my machine of course):

Running another process in the same shell and inspecting it’s namespaces gives the same symlinks as the above:

Linux provides the UNSHARE syscall from the sched.h library to change the process’ execution context and allow it to create and enter new namespaces. After UNSHARE gets called with the specific bit mask (flags combining which namespaces to “unshare” from the execution context), the running process gets detached from the root namespaces into it’s own set of namespaces. Unfortunately, it’s not enough to call UNSHARE and expect to have an isolated container (for example, a parent process that “unshares” the PID namespace, still runs in the root PID namespace, but any child process created afterwards will enter the newly created PID namespace). Usually after the container runtime calls UNSHARE it gets followed by a fork/vfork call to create the actual container process.

CLONE syscall is a far better option and the implementation in Rust’s nix package feels more robust and fine-grained. It gives the ability to specify the namespace flags as in UNSHARE, forks a child process and creates the stack for the child.

SETNS syscall (NSENTER command) gives the option to change the given namespace to an already existing namespace by it’s file descriptor. For example, to fork a shell process that enters the mount namespace of process with PID 15, enter in a new shell (with root permissions):

Enough theory! To confirm everything said above, let’s jump onto a Docker-based example. We’ll run an alpine container, list the process on the host system, inspect it’s namespaces and docker exec into it with SETNS.

After inspecting the container’s PID, let’s see the namespace symlinks under /proc/PID/ns:

Interesting! Some namespaces are the same as with the above sleep command that we’ve run in our terminal (specifically the user and cgroup namespaces), but most of them are different, which proves that Docker separates containers in different namespaces.

Now, let’s try to exec a shell inside the container to inspect the filesystem:

What’s going on here is that we’ve run NSENTER to start a shell process inside the mount namespace of the container process. The container’s mount namespace is different from the root one because the root directory lists a bit different tree structure than on my WSL instance. Additionally, on my Debian instance, printing the Linux distro info (/etc/os-release) inside the container shows an Alpine Linux distro. So we conclude:

Most readers are already familiar with the Docker client-server model, so it’s unnecessary to explain how the CLI invokes commands on the dockerd service running in the background. Let’s open the front hood and see what’s going underneath.

In the last example, we’ve seen that the docker run command forks a process in a separate namespace set. What’s actually happening is that Docker (again, more specifically containerd, but let’s keep it simple for now) calls the underlying container runtime to create the specified namespaces, prepare the container environment and execute some special commands needed before the actual user-defined command starts.

But if that’s the responsibility of the runtime, what do we use Docker for?
Docker prepares everything before container creation, with the 2 most important parts:

These two parts (together with other things that we will discover in this series) are called the container bundle.

Besides these two most important things, Docker does other preparations too (for example, pulls the image layers from the remote repository, sets up the networking interfaces if the container has networking enabled, and so on).

Standardization is a crucial part of any software integration. From writing REST APIs or gRPC services to designing low-level network protocols, everything starts with a well-defined document describing what needs to be (un)expected behavior and the minimal contract that an implementation needs to fulfill.

The Open Container Initiative (OCI) created and still maintains the OCI runtime specification that can be found here. It’s a spec that still evolves and adds new features that a container runtime can or may execute while launching a container process.

I won’t go into the details of the spec, as it’s described very well in the document, but at least here is what it is in a nutshell.

An OCI-compliant container runtime is a CLI binary that implements the following commands:

As with any other emerging spec, the OCI runtime spec describes the minimum features for creating a container. Popular container runtime implementations like runc or crun have additional arguments that help setting up the PID file of the process, root folder for the container state, or the socket file for the container terminal.

But don’t worry about these parts. In the upcoming articles in this series, we’ll dive deeper into it with some Rust code.

On Data and Objects

Once suspended, penumbra23 will not be able to comment or publish posts until their suspension is removed.

Once unsuspended, penumbra23 will be able to comment and publish posts again.

Once unpublished, all posts by penumbra23 will become hidden and only accessible to themselves.

If penumbra23 is not suspended, they can still re-publish their posts from their dashboard.

Once unpublished, this post will become invisible to the public and only accessible to penumbra23.

Thanks for keeping DEV Community 👩‍💻👨‍💻 safe. Here is what you can do to flag penumbra23:

Unflagging penumbra23 will restore default visibility to their posts.