In this article, we cover the all-important yet so confusing topic in JavaScript which is the “this” keyword.

If “this” scares you, do not worry! We will learn how to determine the value of the “this” keyword using five simple rules.

Those five simple rules are as follows:

Don’t worry about these scary names. Computer Science people have a fancy for naming terms so that they sound extra-terrestrial. Under the hood, they are just common concepts that any willing human can understand.

The “this” variable corresponds to how you invoke a function. These rules help us to determine the value of this in various scenarios.

Once you understand these rules, then you would not fear them anymore.

Before we begin, please go through this article to understand how this works.

What is “this” in brief

When calling a function in a standard way shown above, “this” will actually refer to the global object!

In the browser, the global object means the Window object.

One exception to remember — that is when strict mode is enabled. By writing “use-strict” you can prevent anything from being declared on the global object. 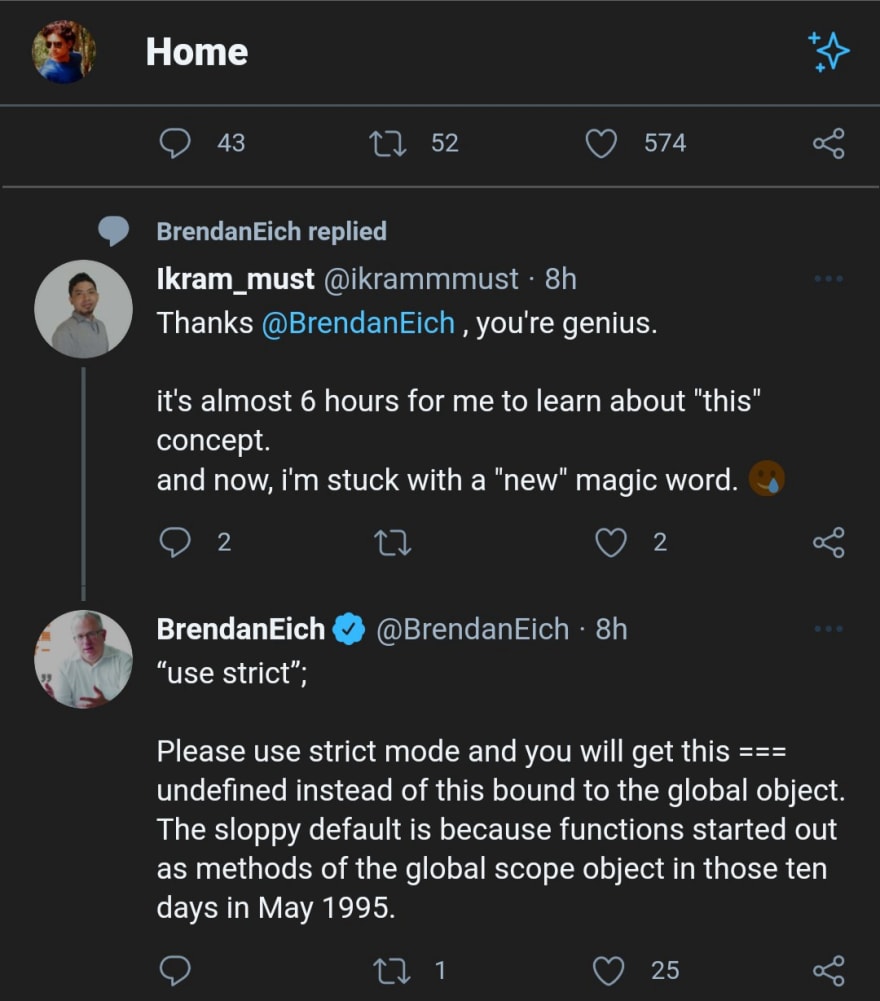 If the function is contained within an object, then that object will be referenced by “this”. 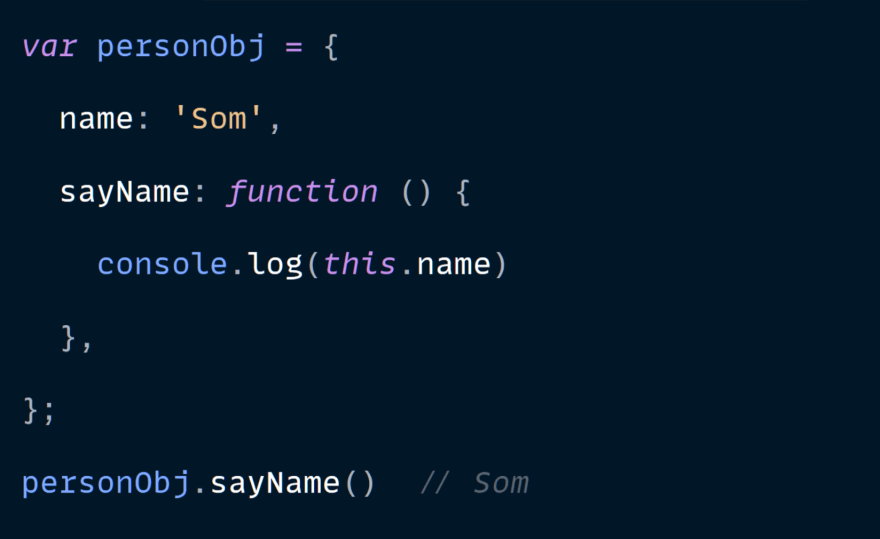 For the above, the this keyword will point to the personObj

We saw how this points to the global object and in another case, it points to the object which contains it. Wouldn’t it be nice to able to control what this variable ends up being when the function is called?

Words like call, apply, and bind usually causes terror in new developers. In reality, they are all functions that can be used to explicitly set the value of “this”.

Let us understand it with an example.

Suppose we have two objects, let us say personObj and readerObj 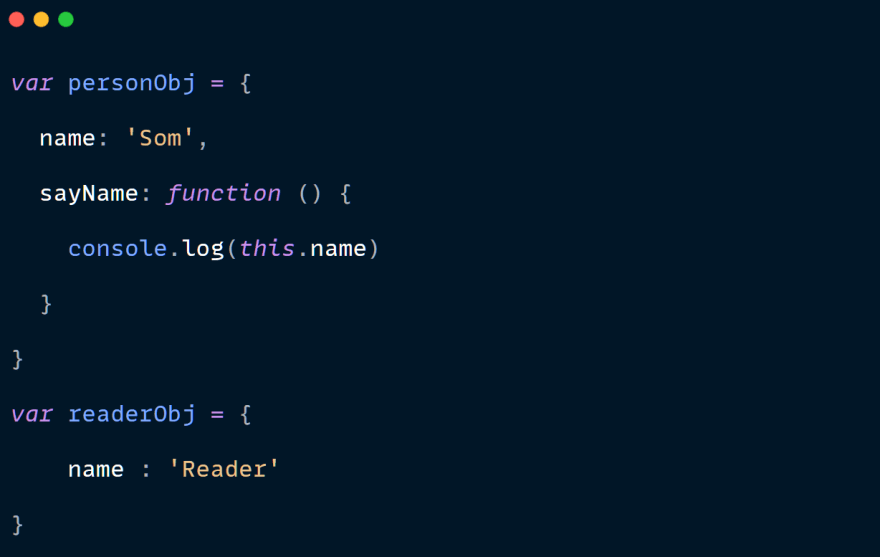 Both the object has a name property. The personObj has a function that can print the value inside the name but, the readerObj does not have any such feature!

Here we can make use of one of the three methods — call, apply or bind.

This process is called function borrowing.

We borrowed the sayName method for the readerObj.

Now we can print the name property that is in readerObj 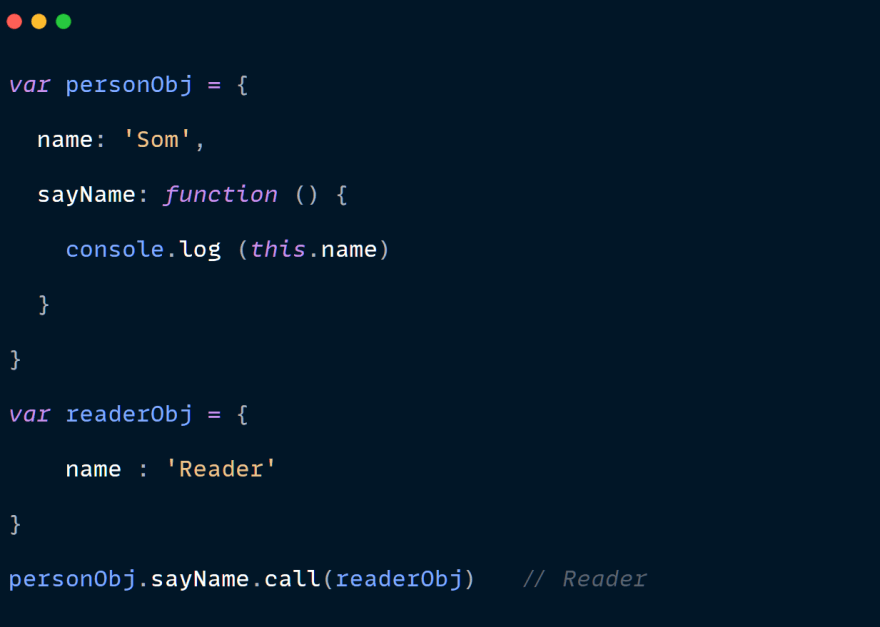 So when the JavaScript engine executes the code, the this variable in the sayName function does not point to the personObj but it points to the readerObj.

Does that make sense?

Not just that — we can also pass some arguments when we use the call function.

We passed Namaste as an argument

We can make use of the argument in the sayName method.

When we execute the code, we will get the output along with the passed argument. 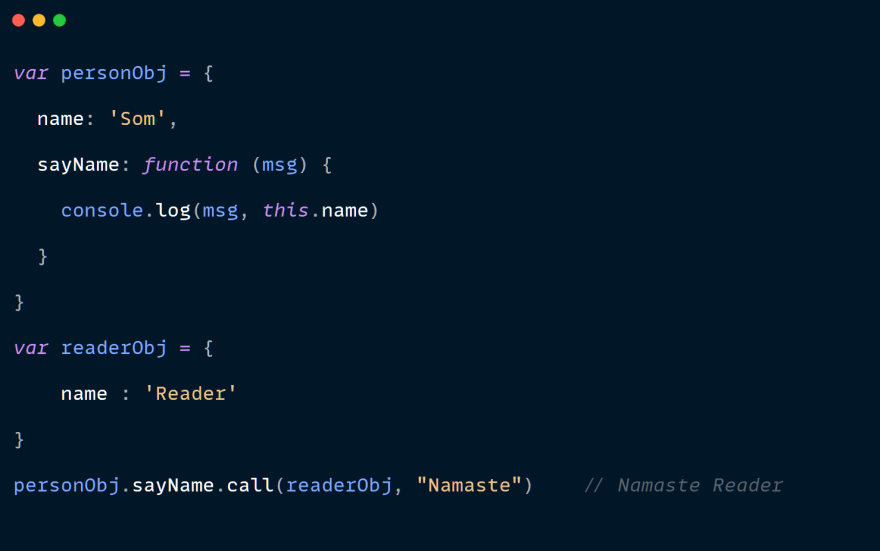 The apply method works the same way, but instead of regular arguments, it takes an array as an argument. 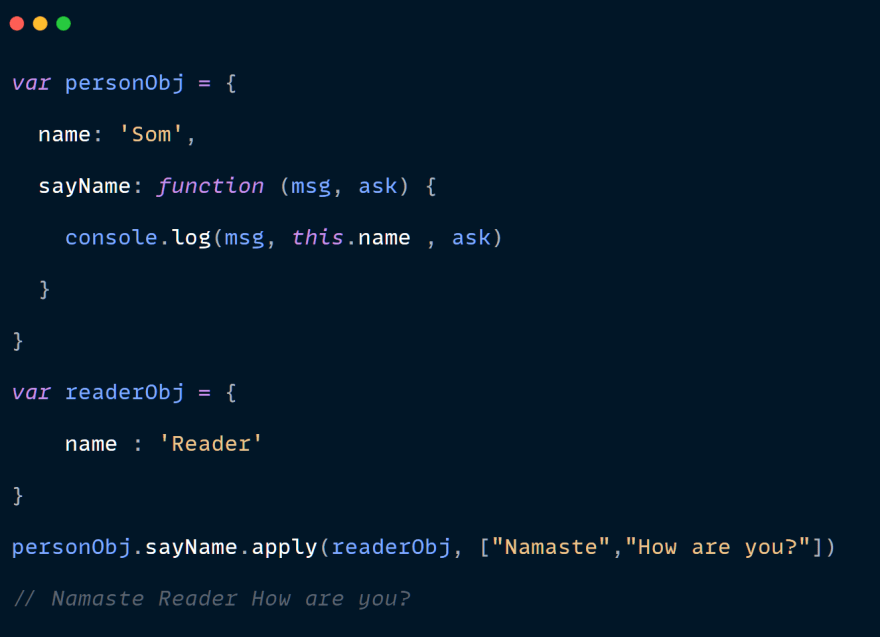 The bind method also works the same way — it can accept a regular argument.

But unlike call and apply — bind returns a function — that function can be stored in a variable and can be executed in the future. 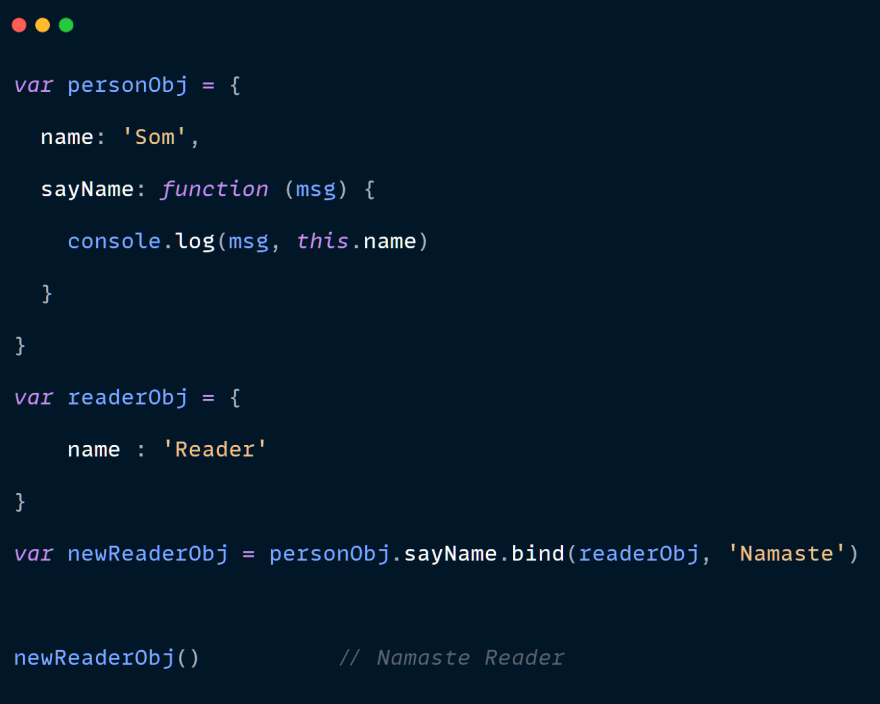 One can see the use of bind in function currying — a topic that we will cover in the future.

Remember, when an instance of an object gets created using the new keyword, “this” always points to that newly created instance.

Let us understand this with an example. 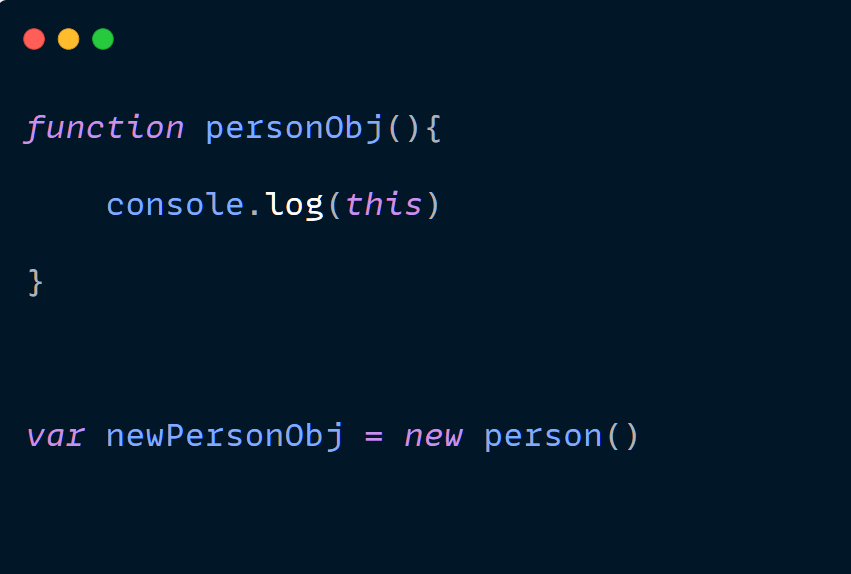 When we run this code, what are we supposed to get?

As we said — an empty object!

What is happening under the hood is 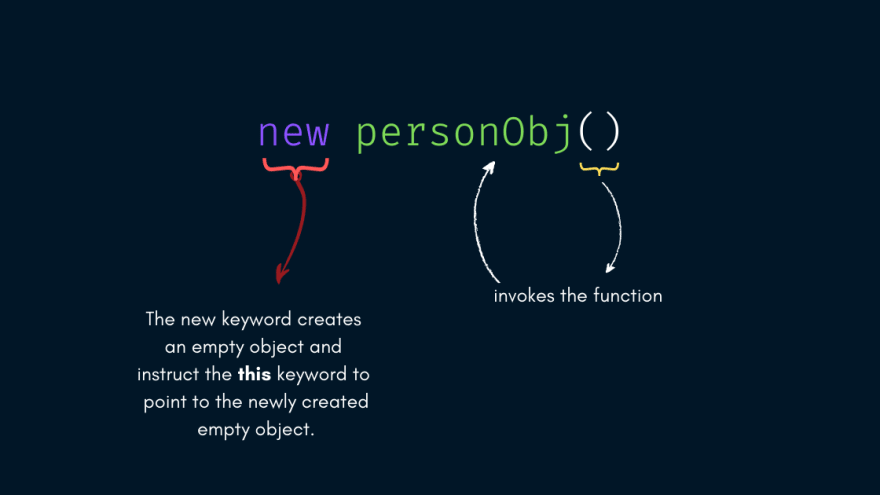 What? Are we invoking the function?

See, I told you it is getting invoked.

Let us look at the whole thing. 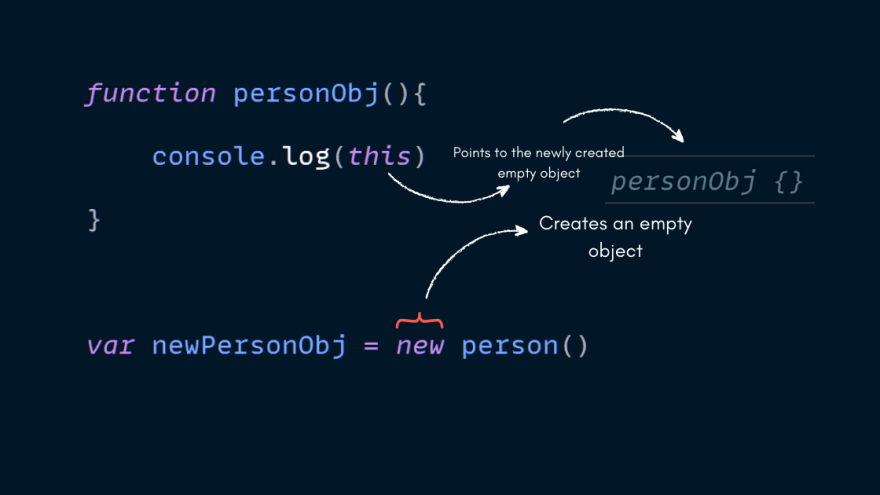 If we put some value in the function, it will put that in the newly created object and then return it! 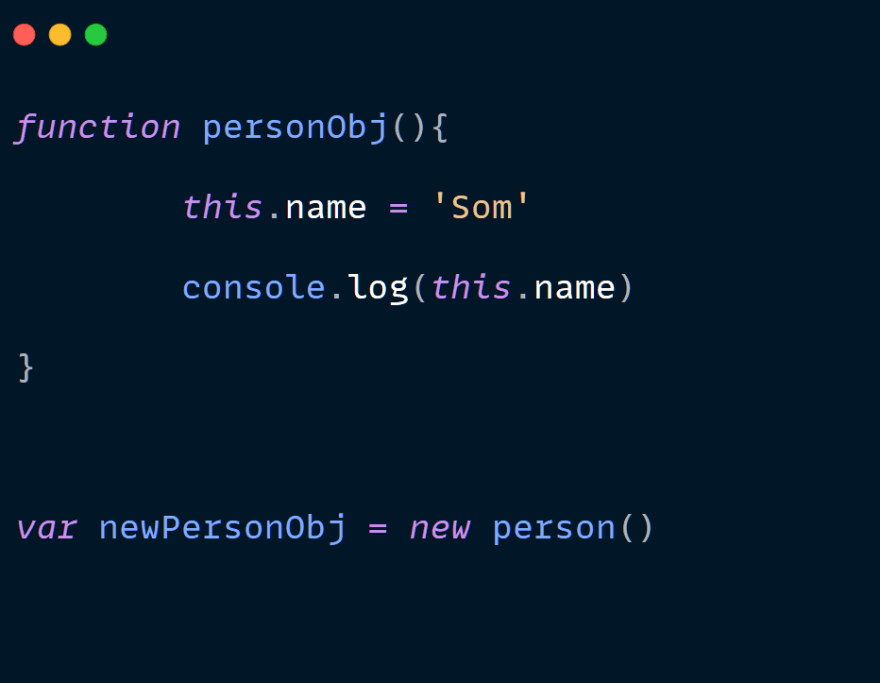 Let us finish this concept with an animation.

Since dev.to supports animation of 500 frames only, I am attaching an external link to the animation
Go here for the animation

In the above example, we are using a function to create an object.

This type of function is known as a function constructor.

Remember, in the newPersonObj, which stores the copy of personObj— the “this" variable points to empty personObj

Does it make sense now?

With the advent of ES6 — we got arrow functions. Arrow functions with their ultra-lean syntax are a natural replacement for their traditional anonymous counterparts.

To explicitly invoke an arrow function, as with a regular anonymous function, you would assign it to a variable first:

Arrow functions are just like regular anonymous functions, with one major exception- the behavior of this object inside the function.

For example, the following example attempts to call the start() method of a custom object to increment its counter property by 1 every second, though it fails due to an incorrect assumption of the "this" object reference counter. 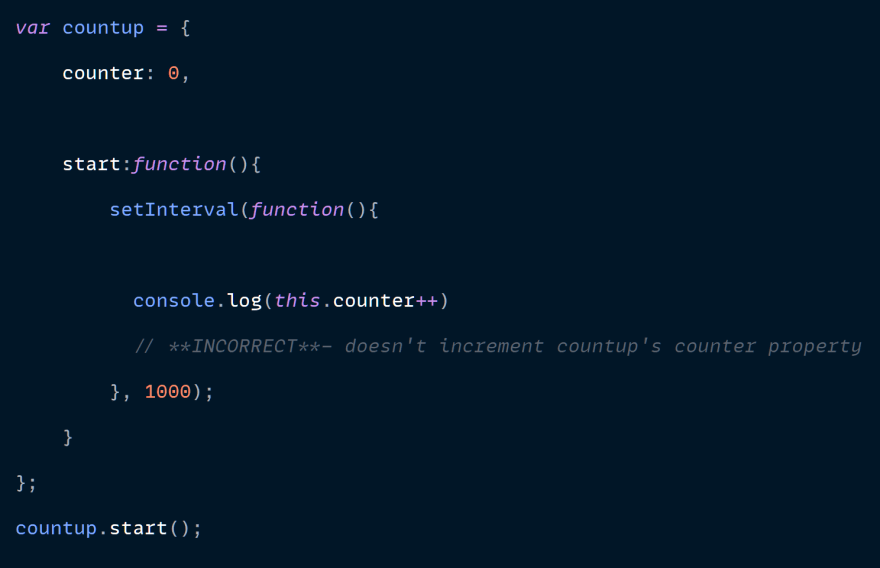 The result is a reference to a non-existent window.counter property that will repeatedly return NaN when we try to increment it. To properly reference the countup object then inside the anonymous function, we should cache a reference to the correct "this" object before the context changes to a different one: 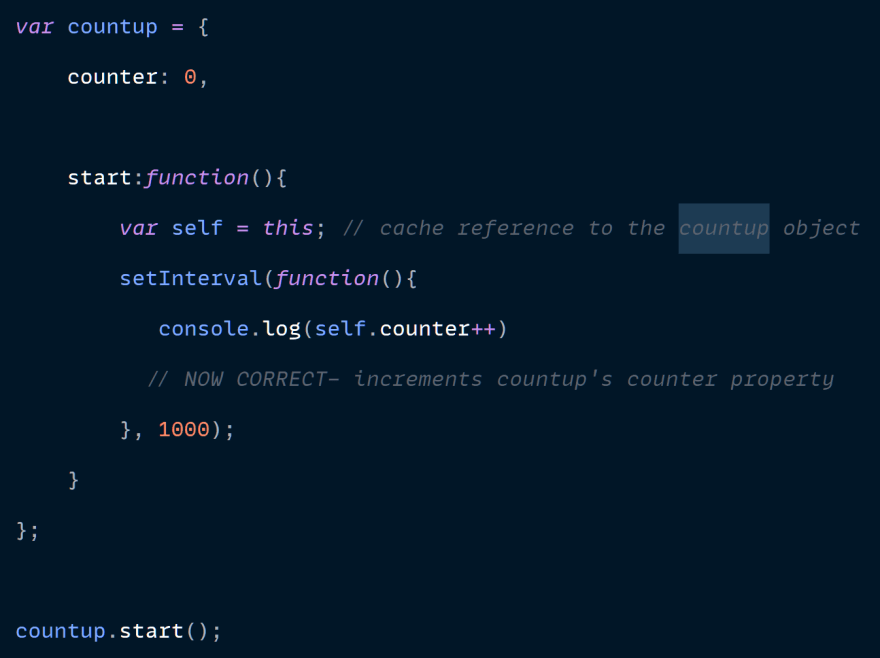 The "this" object inside an arrow function is lexically bound, which is just a fancy way of saying its value is static and determined by the place where the “this" keyword is defined.

Contrast that with regular functions, where "this" is dynamic and based on the context it's called regardless of the scope at the time "this" was defined.

Let’s take the previous example that gave us trouble initially, and see how changing over to using an arrow function intuitively addresses the problem: 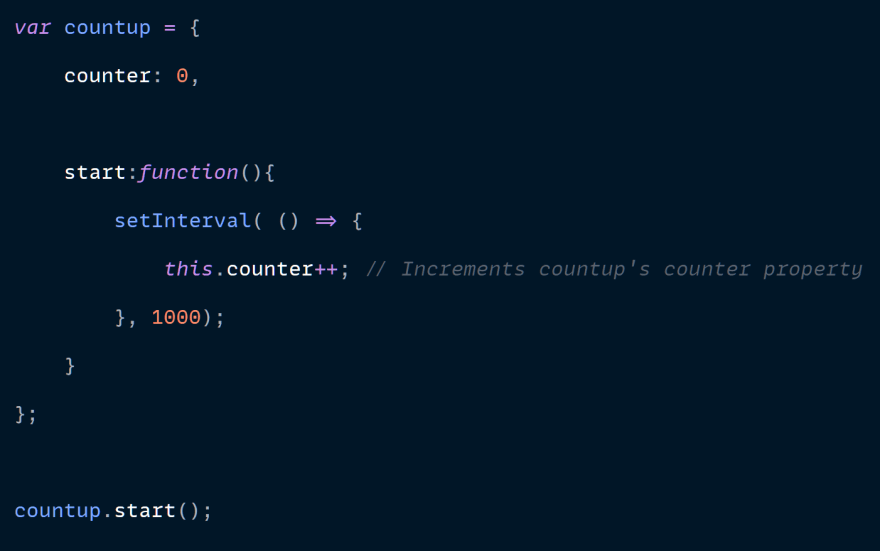 We solved the problem by just using an arrow function.

If you understood all the rules, then pat yourself on the back — you deserve it! Now you are no more someone who is afraid of JavaScript’s most confusing concept — the "this" keyword.

In this article we learned:

I wanted to take this last opportunity to say thank you.

Thank you for being here! I would not be able to do what I do without people like you who follow along and take that leap of faith to read my post.

I hope you’ll join me in my future blog post and stick around because I think we have something great here. And I hope that I will be able to help you along in your career for many more years to come!

See you next time. Bye!

Once suspended, polymathsomnath will not be able to comment or publish posts until their suspension is removed.

Once unsuspended, polymathsomnath will be able to comment and publish posts again.

Once unpublished, all posts by polymathsomnath will become hidden and only accessible to themselves.

If polymathsomnath is not suspended, they can still re-publish their posts from their dashboard.