What Is A Habit?

The University College London defines habits as "behaviours which are performed automatically because they have been performed frequently in the past. This repetition creates a mental association between the situation (cue) and action (behaviour) which means that when the cue is encountered the behaviour is performed automatically. Automaticity has a number of components, one of which is lack of thought" - How long does it take to form a habit?.

In essence, a habit is a task or behavior we perform without having to consciously go through the motions of it. Every one of us has dozens of helpful habits that we do every day without much thought - brushing our teeth, showering, getting dressed, making breakfast, driving, and perhaps even some of our workday tasks. We can even build good goal-based habits with proper scheduling and dedication like daily practice of a language we're learning - spoken or programming, meditation, or exercise.

But habits can also detrimental - snoozing the alarm one too many times, scrolling social media too frequently or for too long (especially right before bed), smoking, procrastinating, or mindlessly working our way through an entire bag of chips during a TV show. We may even have bad habits like nail biting, thumb-sucking, or hair twirling that pop up when we're anxious and/or bored.

Let's say I want to build a habit of practicing French every day so I can become more fluent by the time I travel there in a couple of years. Do you know how long it could take me to build a habit until it becomes an automatic process? (I'm not considering fluency, just talking about the habit itself here)

Many will say it takes 21 days or 3 weeks to build a solid habit because that's what we've always been told (we can thank Psycho-Cybernatics from the 1960s for that!). That is actually only correct for a small portion of people. In 2009 Phillippa Lally and colleagues from the Cancer Research UK Health Behaviour Research Center completed a study that showed a much larger range of 18 to 254 days - How are habits formed: Modelling habit formation in the real world. The study group was a set of 96 volunteers and was only carried on for 12 weeks (84 days), but matching results to an asymptotic curve allowed them to estimate the automaticity range much further out.

In other words, I have to consciously set aside time for my French practice every single day for up to 9 months before I will suddenly find myself launching Duolingo or Pimsleur for my French lesson without even realizing I did it.

How To Build A Habit

Building a new habit isn't always as simple as "I'm going to do this thing every day until I do it automatically," sometimes it can be hard to remember to do whatever it was you wanted to do! The British Journal of General Practice provides a small record template for patients who want to make a new healthy habit - Making health habitual: the psychology of 'habit-formation' and general practice 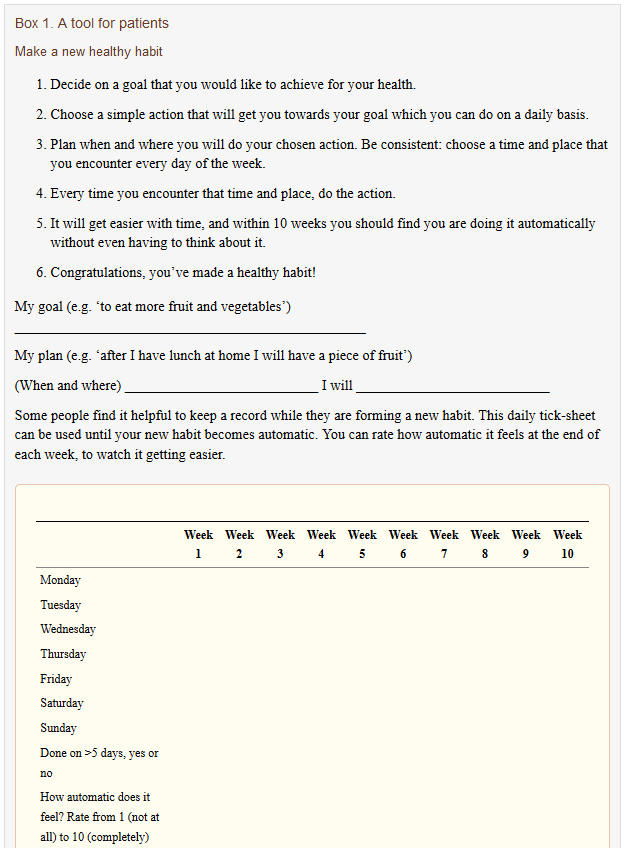 You may notice from the template that planning a consistent time and place can help with building a solid habit, such as "before breakfast" or "after work." For those of us who are super spreadsheet nerds, we can even use the daily "automatic feel" ratings to create our own graph of how quickly we build habits to recreate Lally's research on a personal level!

The biggest takeaway from this is that building a habit requires a conscious decision to build the habit, as well as discipline and regular practice. It must become a part of your daily routine and should ideally happen at the same time each day for it to really be a solid part of your new day-to-day actions.

What About Breaking Habits?

As I said earlier, not all habits are beneficial to us and some would be better off forgotten... but that's just as much a challenge as building a new habit and can take just as long.

Blackmores has a few suggestions to help with breaking a habit in their article How long does it really take to break a habit?. Replacing a bad habit with a new, positive habit is noted as one of the easiest ways to change behavior. Cravings may subside with the alternative positive stimulus and can also increase your awareness of the habit so it's easier to catch yourself in the act. Some people use tools to assist with breaking their tougher habits such as gloves for nail biting and thumb sucking or nicotine patches to quit smoking. Most devices come with apps that will cut off your social media after a set amount of time or between certain hours.

Recreating the British Journal of General Practice's record template for building habits could also assist in the breaking of bad habits. The steps could be changed to something like the below:

The daily chart could even still come in handy, tracking how automatic the alternative feels as well as how often you caught yourself still performing the original bad habit. There's nothing wrong with failing, being honest about it will just help make you more aware in the future!

I have been trying to do my French lessons every morning, but I tend to skip weekends because it's typically my morning commute filler (and I don't commute on weekends). This is making it hard for it to become a completely automatic behavior, though once I get on the bus I tend to have no issues flipping over to Duolingo for a few lessons.

Do you have any habits you've been building? How about breaking? I'd love for you to share them below!

How to set up TDM-GCC in Ubuntu?

WTF is an OKR!? ft. KPIs or: How I Learned to Stop Worrying and Love the Acronyms

Thanks for keeping DEV Community 👩‍💻👨‍💻 safe. Here is what you can do to flag rachelsoderberg: