This document will walk through the design logic behind the Constraint Machine, one of the two middle layers in the Radix Engine.

The Constraint Machine is a concept that takes Bitcoin's UTXO model and expands it for generic programming. This machine runs constraint validation against new atoms and historical data.

The other middle layer is the Atom Model, which takes that core generic programming language and provides much easier abstractions for developing correct state machines.

Tip: you can read more about the Atom Model structure in this article. 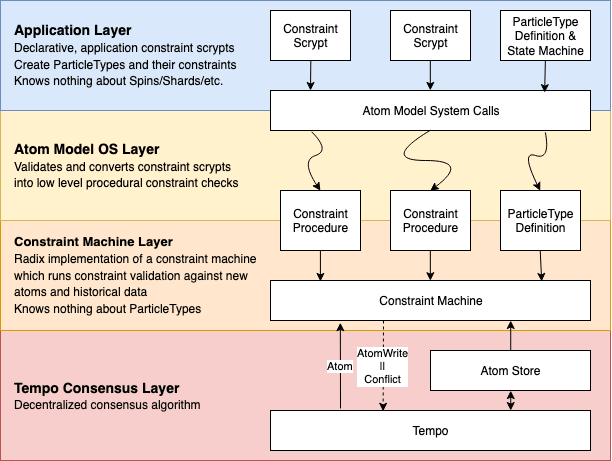 Before we dig in, let's explain why we are moving away from the blockchain virtual machine (VM) that made Ethereum and EOS so popular.

At a high level, the traditional computing machine computes a state. Being so generic makes it incredibly powerful, but it brings a few issues:

A Constraint Machine on the other hand validates a new state. This is similar to how Bitcoin validates new UTXOs. Although this is a drastic reduction in capability compared to the traditional computing machine, we get the following nice properties:

We judge this to be the right tradeoff when creating a distributed ledger, since:

The main use-case for generic development on top of a ledger, as made popular by Ethereum's Smart Contract, is implementing correct State Machines. To this end, the Atom Model is designed to provide a simple interface between State Machine management and the Constraint Machine.

We will now present some State Machine fundamentals, as it’s important for a Radix developer to be aware of these concepts.

A State Machine is a device which can be in one of a set number of stable conditions depending on its previous condition and on the present values of its inputs.

The definition of a state machine, defines its behavior and lifecycle. For example: 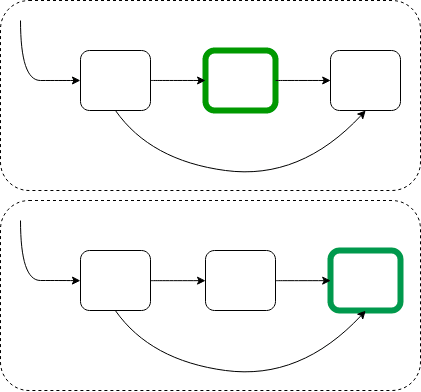 As a State Machine designer it is also important to understand Extended State Machines or the notion of Qualitative and Quantitative aspects of a state machine.

These are transitions to the same state, where "extended state variables" of the state are updated. For example:

These are transitions to a different state. For example:

A particle can be defined as a "sub state of a global state", and it’s the fundamental block when developing on top of the Constraint Machine. When talking about particles there are two parts: a ParticleType and a ParticleInstance. The difference between the two is similar to the difference between State Machine Definitions and State Machine Instances. That is, a ParticleType defines the sub state and a ParticleInstance is an instance of that sub state.

Tip: you can read more about Particles and Particle types in this article.

How does the actual particle transition work?

Given this, low level particle state machine transition management comes into applying logic based on what particles must be spun DOWN for a particle to be spun UP.

Since particles represent a partial state which can be turned on and off, state machines are the perfect construct to manage particles.
There are two main State Machine Instance constructions, both of which use particles in different ways to represent a state:

Note: certain state machine transitions may be dependent on the state of other state machine instances. Currently state dependency is only supported on Indexable State Machine Instances.

Use case: used mostly for cases where the states of a state machine definition are all located in the same shard (they never moves in space). For example, TokenDefinitions.

In a transition State machine instance, every particle has defined what is the required current particle to be transitioned from/to.

Use case: used for cases when a state machine instance can travel across shards. For example, TokenInstances.

Use case: used for cases where multiple state machine definitions in the same shard have dependencies on each other. For example, Minting Permissions.

Following our “5 dollars” example, the next diagram shows the different level of abstraction between a Particle State machine and a Spin State machine: 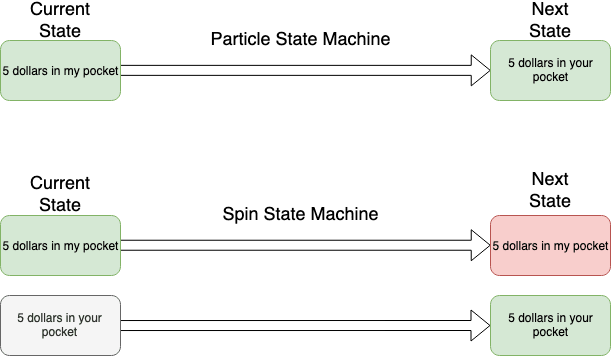 The Constraint Machine is unaware of high-level abstractions such as ParticleTypes and state machines. Instead, it's language consists of: Atoms, Particles, Spins, Indices and Shards. 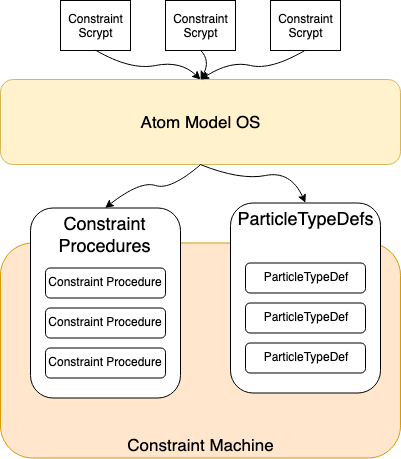 In order to retrieve particles for future validations, they must also be stored in a predictable manner. This is given by ParticleTypeDef, another construct which the Constraint Machine can understand and one which the Atom Model layer must produce from the ConstraintScrypts.
These definitions have the following structure:

The system calls are the mechanism to define the creation and management of state machines using particles. The Atom Model layer creates ParticleTypeDef's dynamically based on all the system calls issued. That is, it can tell which indices and destinations are required by the scrypts alone. 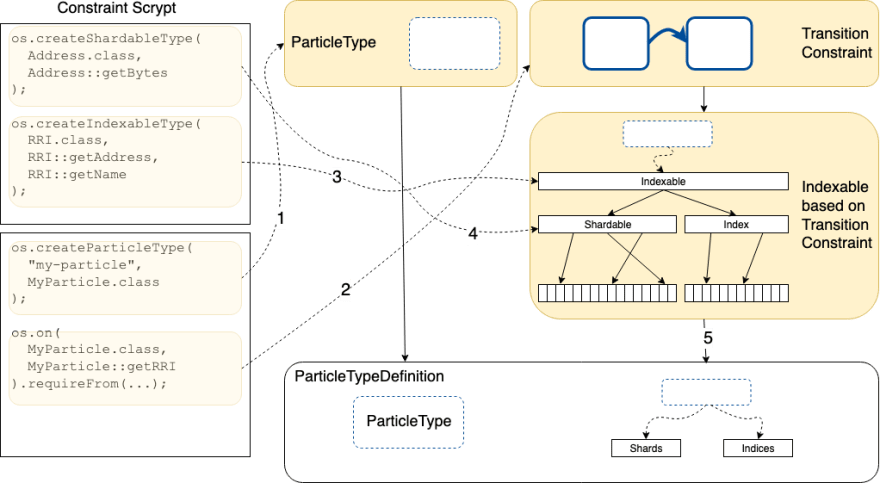 After the Atom Model layer converts all scrypts into ConstraintProcedures and ParticleTypeDefs, it passes all instances of these two structures to the Radix Constraint Machine.

Once the Radix Constraint Machine collects these instances, it can then validate and return write instructions for any new atom given some read-only Atom store.

Note that the Constraint Machine in this case does not update any state, it simply returns what the Atom Write should be without ever updating the Atom Store itself. Because of this, it is a purely functional component meaning that testing is much easier since there is no state maintenance to worry about. 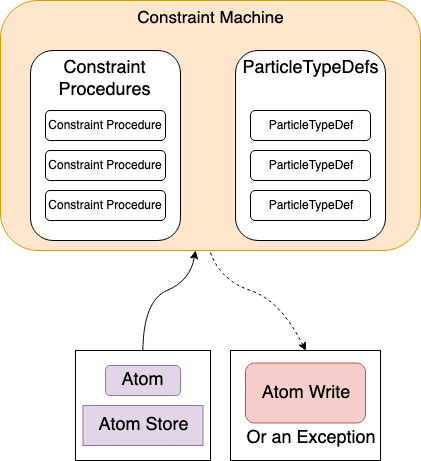 Given that there are multiple particle state transitions possible in an Atom, each of which are possibly dependent on another (e.g. create a token and minting tokens for that token in the same atom) there needs to be a mechanism for determining which state is relevant during validation of a constraint procedure. This is defined by the array of particle groups in an atom. Validation occurs with the following rules:

This means that state transitions which are dependent on each other should not go into the same particle group.

An example of how particle group processing occurs follows: 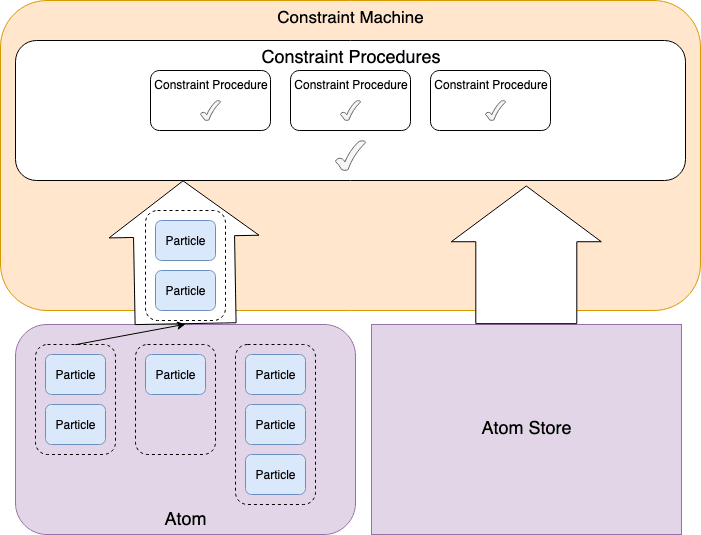 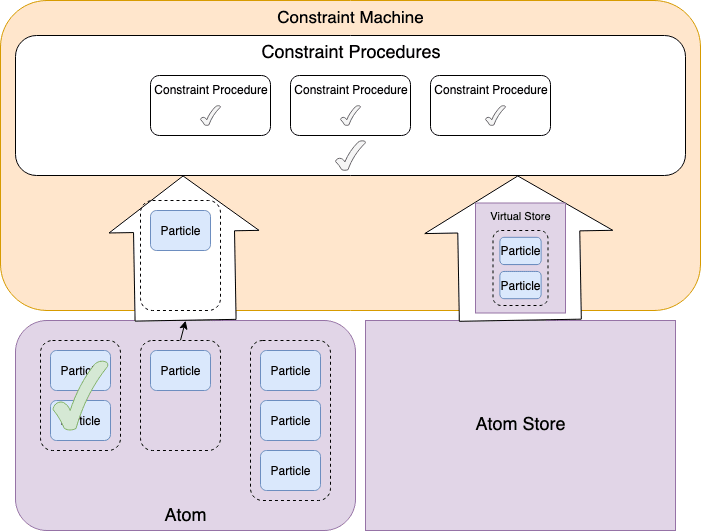 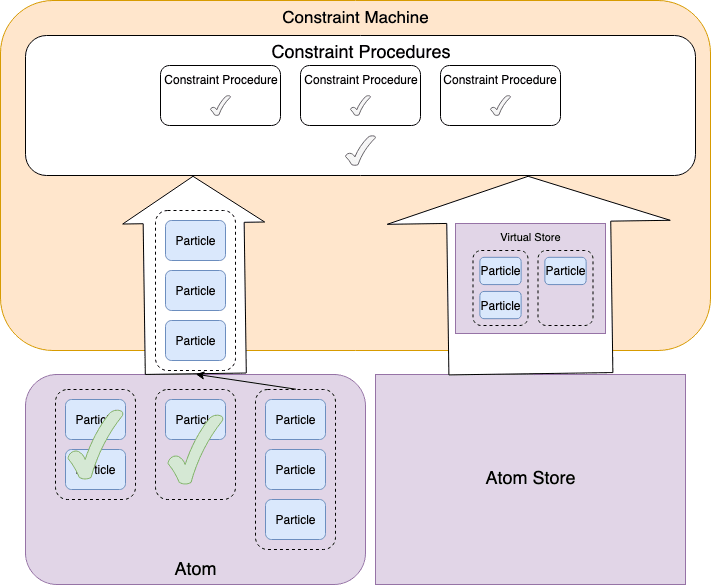 The same pattern continues until all particle groups have been validated successfully. On any failure, the machine will exit early and throw a ValidationException.

Once all of the ParticleWrites are resolved, these are combined to produce an AtomWrite which the constraint machine is able to pass back to inform Tempo how the atom should be stored.

If a ParticleType with no matching ParticleTypeDef is found, a Constraint Machine Validation exception is thrown. 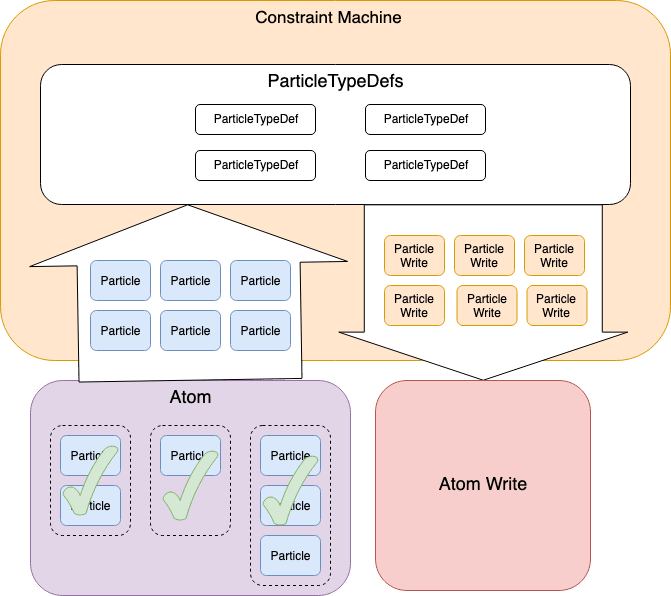 Thanks for keeping DEV Community safe. Here is what you can do to flag radixdlt: