In the past two posts, we built a Rails app in Docker and deployed it in Amazon ECS. In this post, we use AWS CodePipeline to automate building Docker images and deploy our application to our ECS service.

If you want to follow along without having to create the Rails application from the first post, you can clone the latest version of the repository in my GitHub page.

Why even bother with CI/CD Pipelines? 🤷🏻

As a project gets bigger, more and more time is eaten away by a manual deployment process. Imagine having your developers having to SSH to 5-10 EC2 instances running your app to run git pull origin develop and restart the application. This process can take 5-20 minutes of your developer per deploy. If he/she makes mistakes, the developer would have to repeat the process all over again.

CI is a coding philosophy that encourages teams to merge small changes frequently. Every time these changes are merged, an automated build and a suite of tests run to prove this change is compatible with the existing code.

CD is an extension to CI that allows new changes to be deployed rapidly. Every time you merge to master, the CI runs. The app is then deployed to a staging environment for testing. A manual approval process stands in the way of this change being deployed straight to production.

Once your team reaches a level of confidence in your test suite, you can have changes deployed straight to production.

For this post, we will create a 3-stage pipeline: 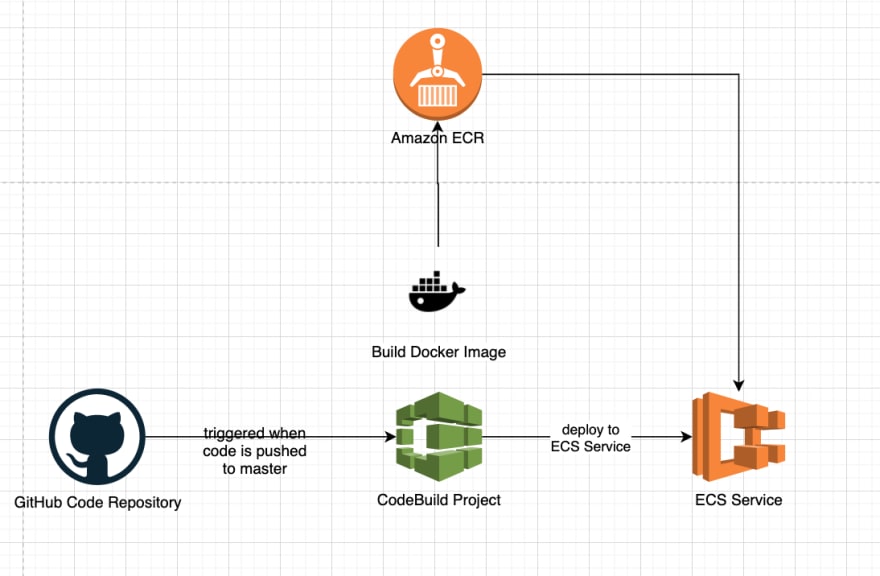 To create a CI/CD pipeline, we have to create a buildspec.yml file in the root directory of our project. This file serves as a set of instructions for CodeBuild on which commands to use for the build process. We can summarize what our buildspec.yml does in the simple steps below:

If you want to learn more about CodeBuild, you may visit my earlier post on how CodeBuild works.

In the blog post series, we created two ECS services: one for web, and another one for Sidekiq. In this post, we create a CI/CD pipeline for the web service only. In the next post, I will modify this CI/CD pipeline to also update the Sidekiq service

(3.1) In the service menu, search for CodePipeline. We must create the pipeline in the same region as the ECS cluster. 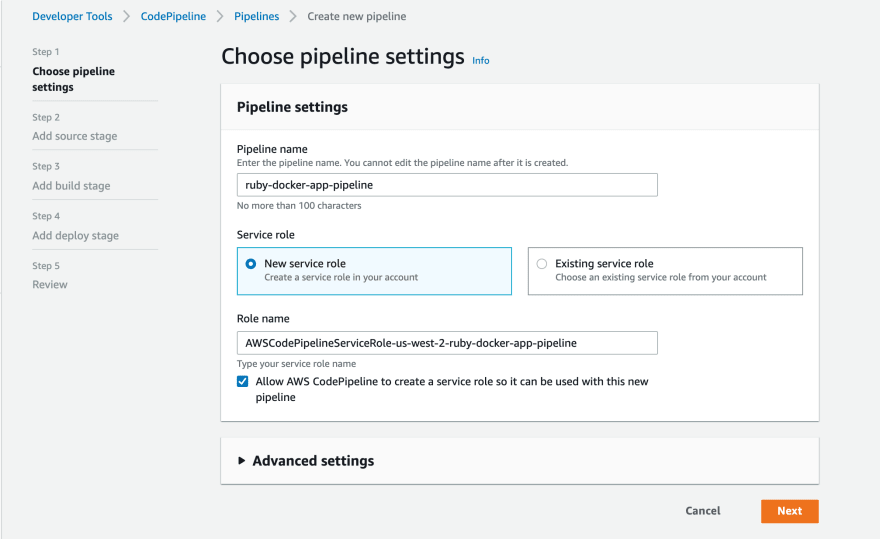 (3.4) For the source stage, choose the source provider where your code is stored. For me (and for you as well, if you've been following the series), I chose GitHub. Then, click "Connect to GitHub."

I think CodeCommit offers the best integration with CodePipeline and other AWS services. But it hasn't quite caught up with GitHub / Bitbucket in terms of ease of use. 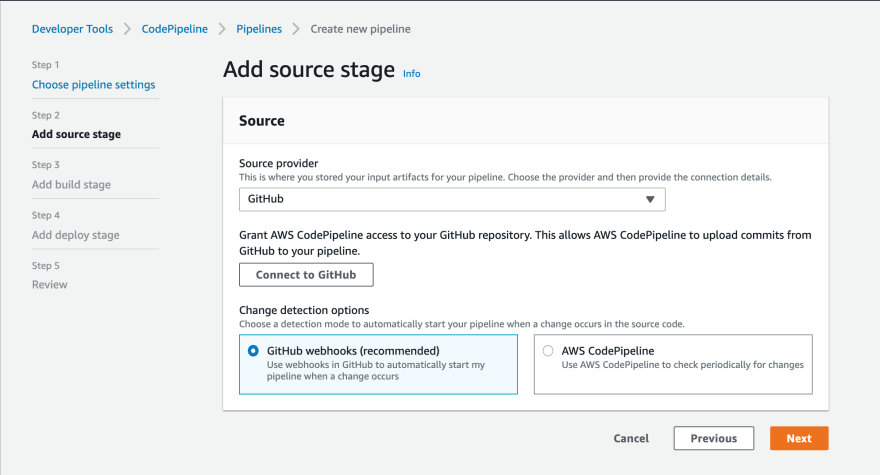 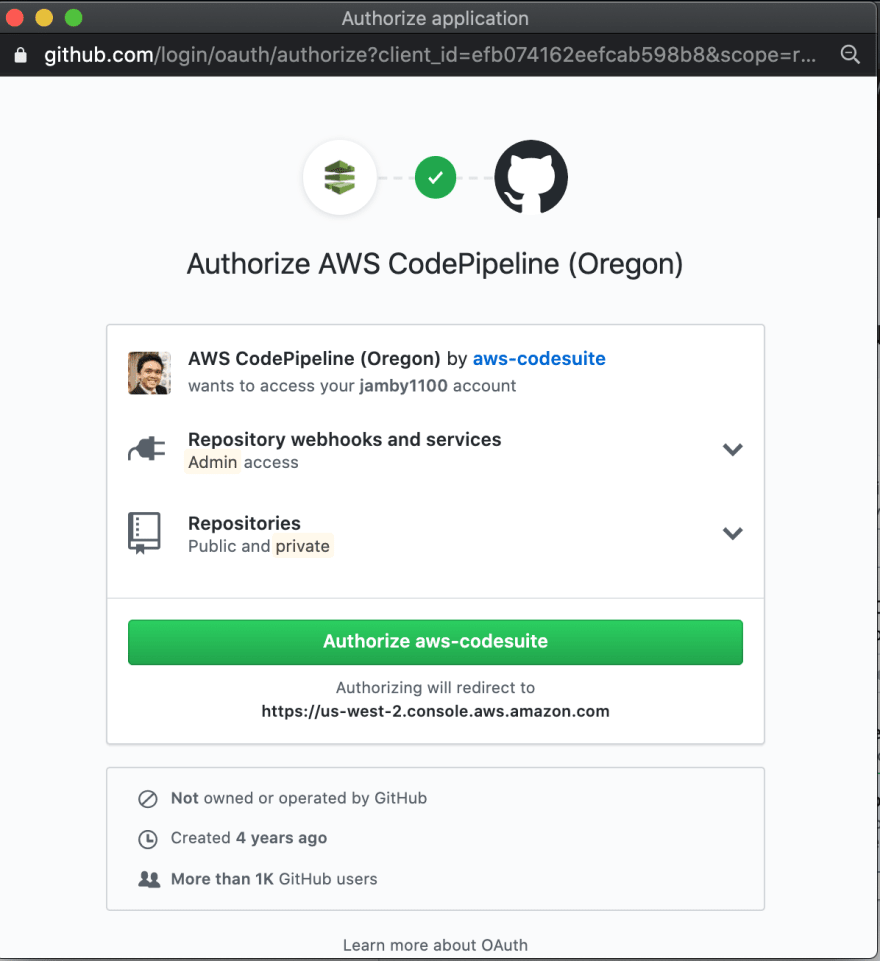 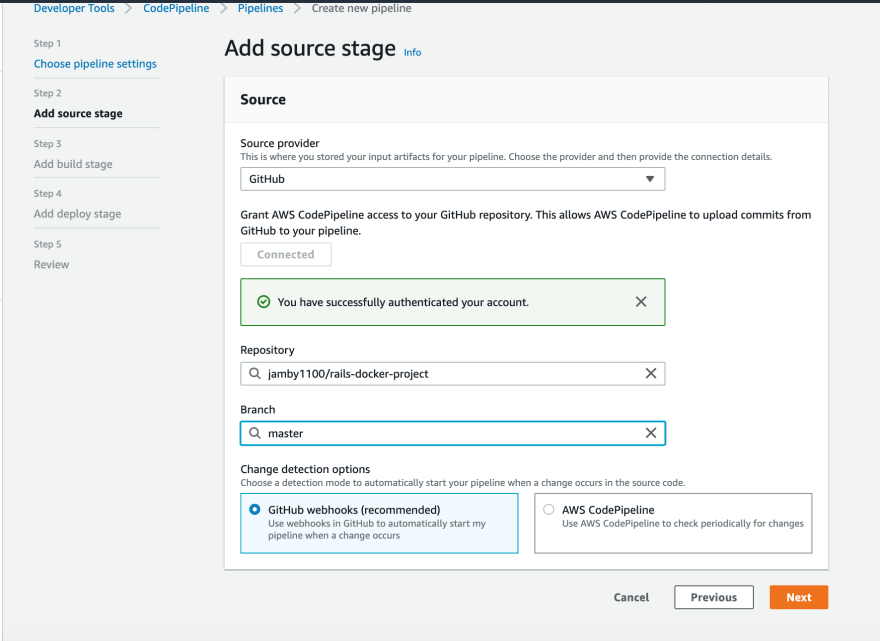 (3.7) In the build stage, we use CodeBuild to build and push our Docker image. To do this, we create a new build project by clicking "Create Project." 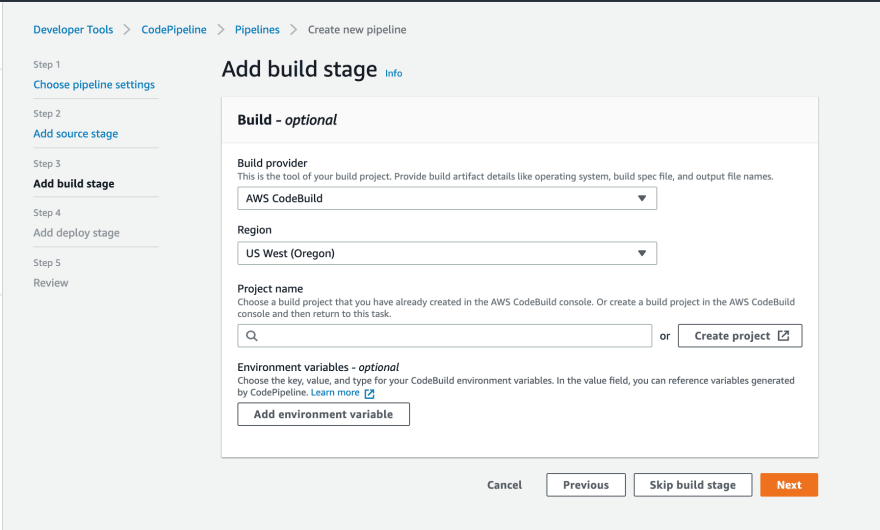 (3.8) Name the project as "ruby-docker-app-demo," and add any description you like to. 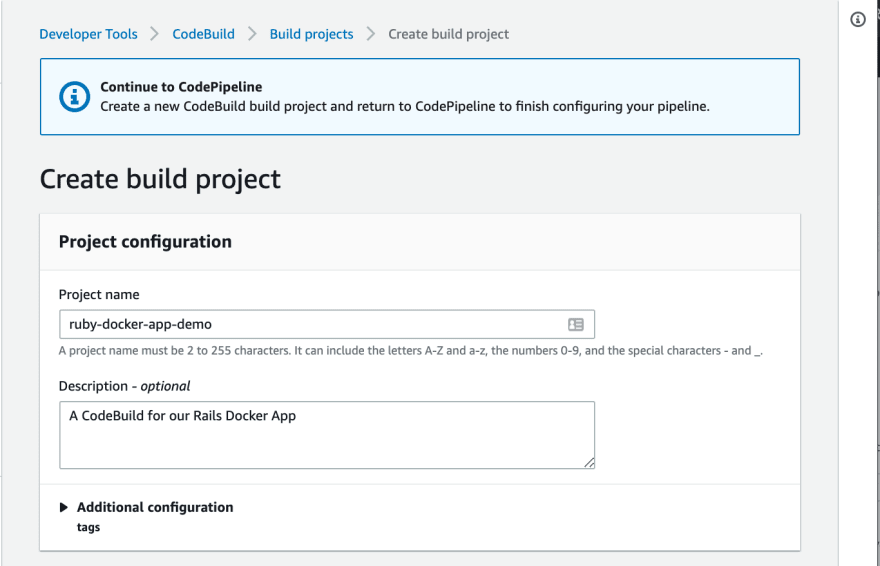 For the environment, choose Ubuntu as the OS and the latest aws/codebuild/standard:4.0 image. Make sure to enable the privileged flag so we can build Docker images.

We aren't very particular about our environment because we don't have any Ruby-based code to run. But in real-world CI/CD pipelines, they usually run unit tests in the build stage. With that, you would have to pick the environment that contains the version of the programming language you want to run the tests on. You can find it here.

We also create a new service role that CodeBuild uses when it runs our build process. 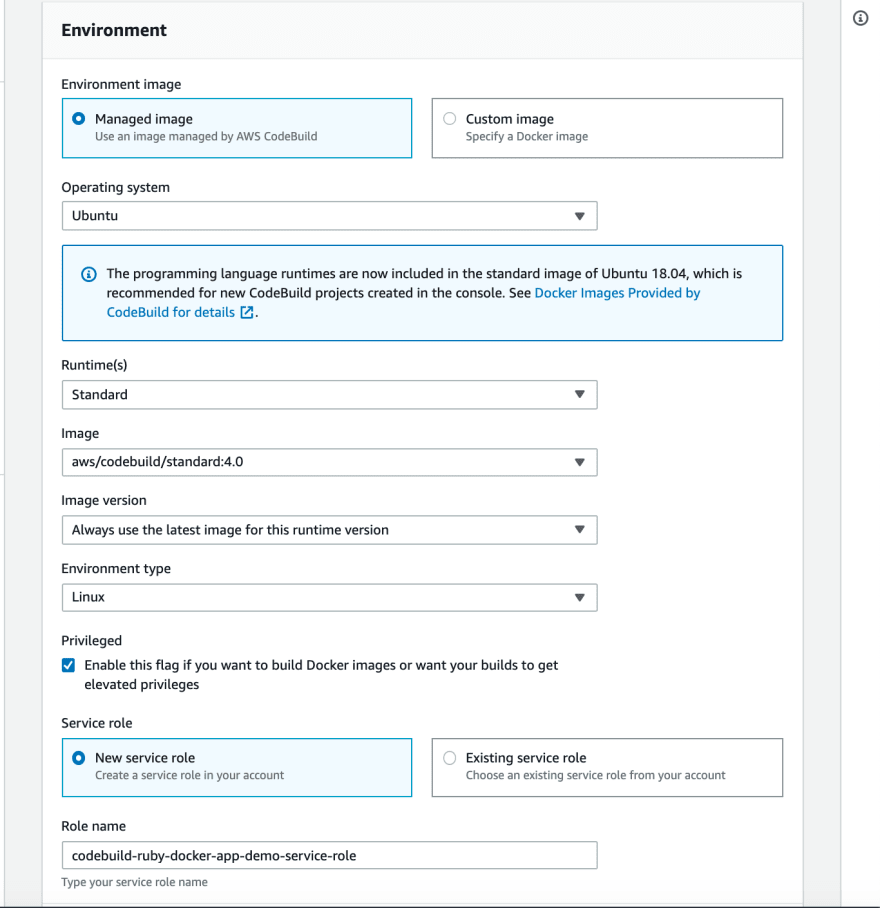 Then, we are redirected back to the CodePipeline page. Here you see that a CodeBuild project has been added. After that, click Next. 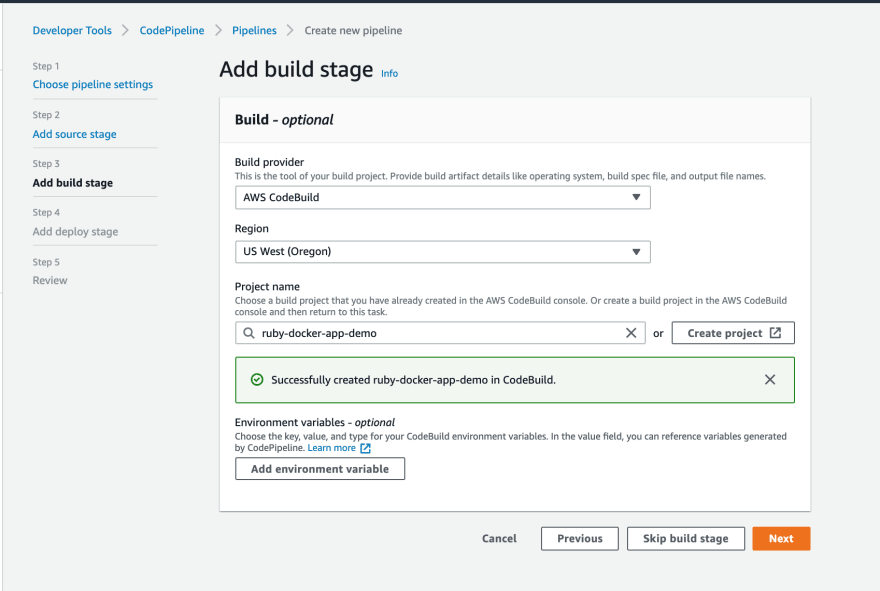 (3.9) Now, we are on the deploy stage. We specify the cluster name and the service name of the ECS Service we want to deploy to. 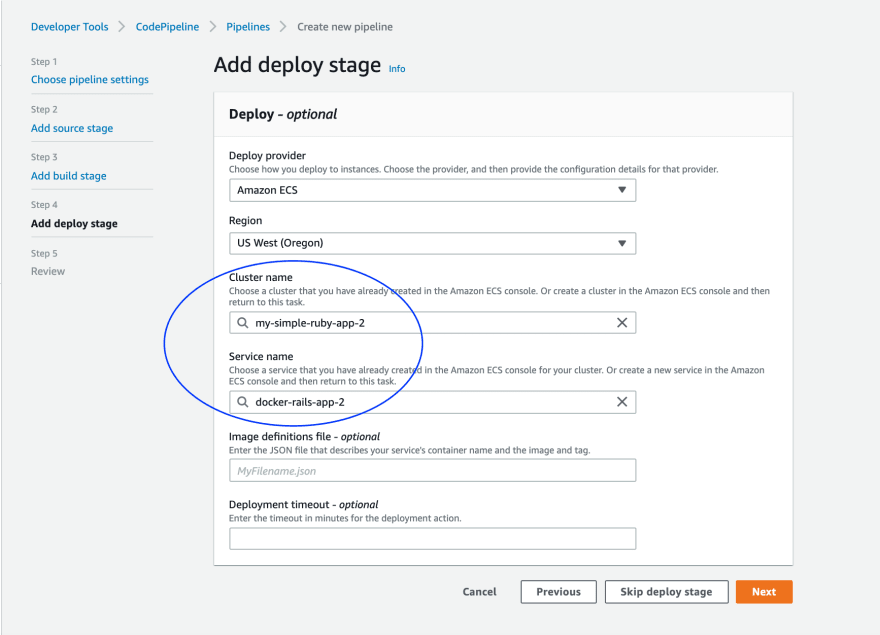 (3.10) Then, review the configurations. Once you are satisfied, hit "Create." 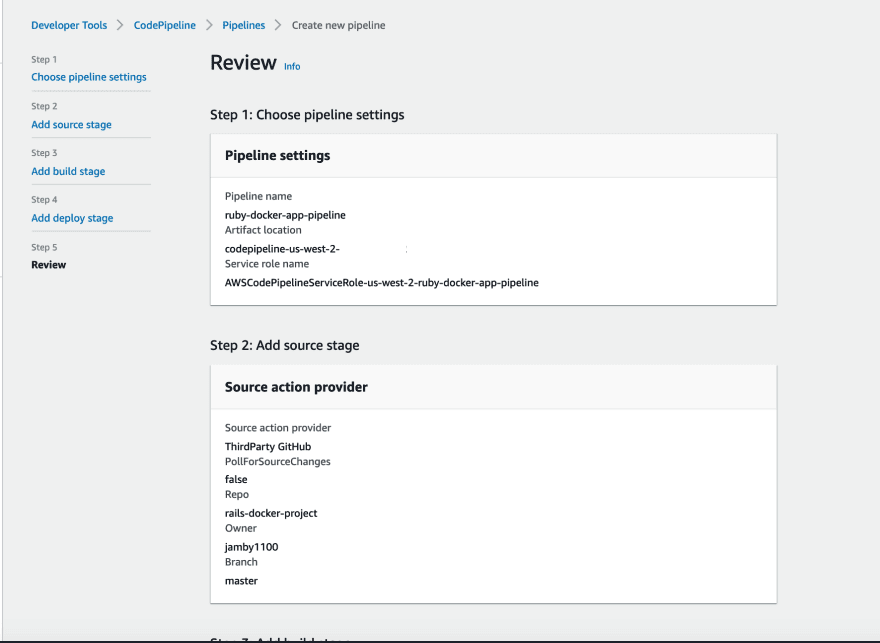 (3.10) Once a pipeline has been created, it automatically tries to run your CI/CD process. It shows you its progress in the visual representation of your pipeline. 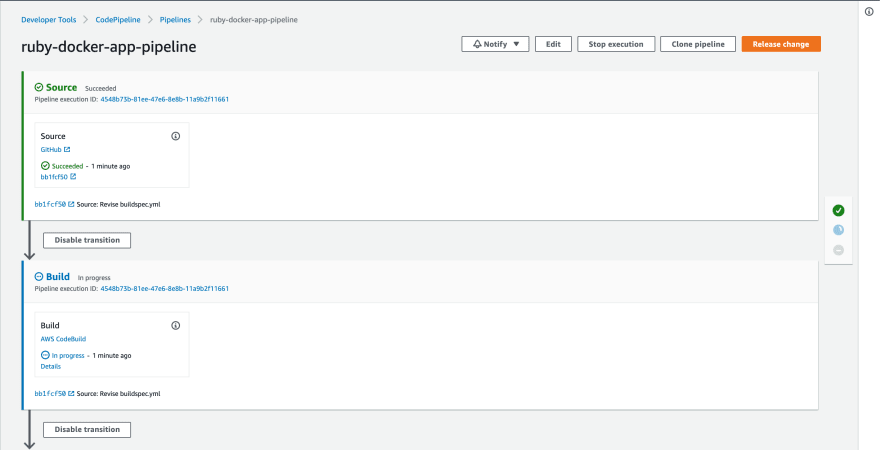 (3.11) After a few minutes, the build stage fails because we haven't added our environment variables, and we haven't updated our CodeBuild service role.

To solve this, go to your CodeBuild project, and click on the service role under Build details. 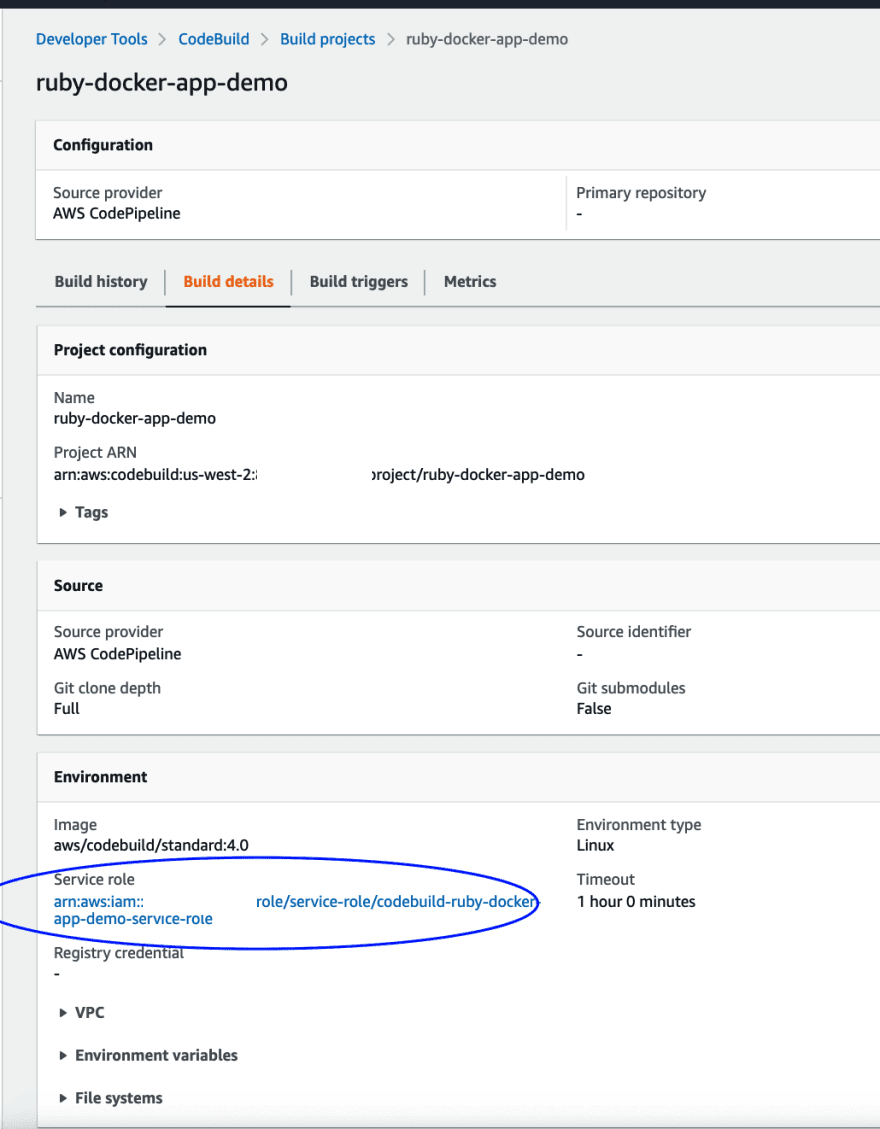 Then, we attach the AmazonEC2ContainerRegistryFullAccess policy to this role. This policy allows CodeBuild to push images to ECR so we can use it in the deploy stage later on. 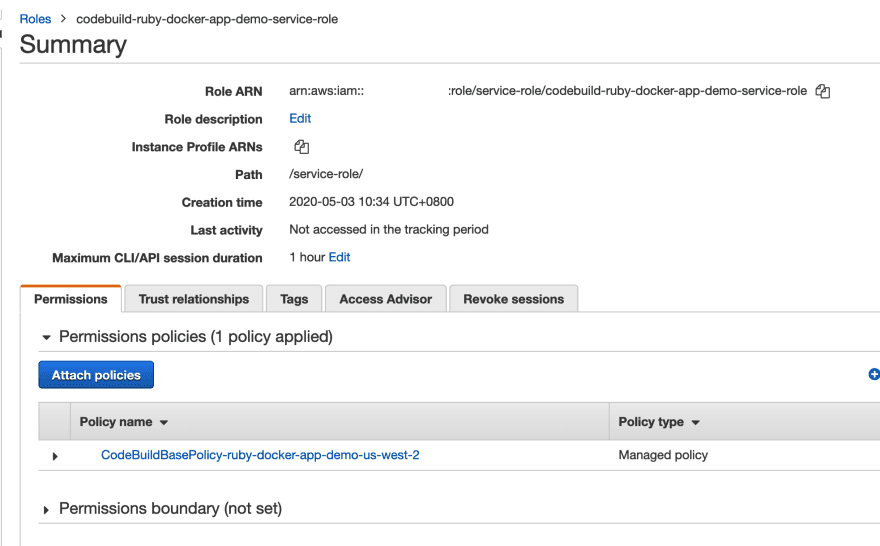 (3.12) Another thing we have to do is to add environment variables. Looking closely at our buildspec.yml in Section 2, the build process needs two variables: $REPO_URL and $CI_REGION.

To do this, go to CodeBuild and find the build project that we created in step 3.8. If you followed the naming, it should be named "ruby-docker-app-demo." Then, under the "Edit" dropdown on the upper right, click "Environment." 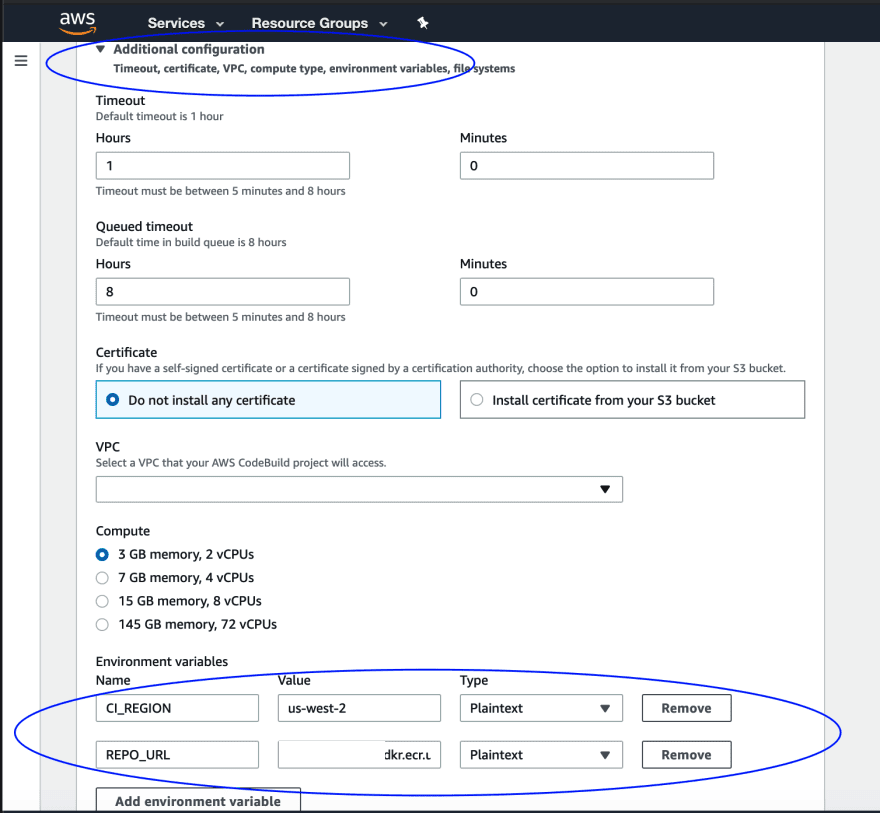 (3.13) With the environment variable and the CodeBuild role fixed, we can run the pipeline properly. Go to CodePipeline and find the pipeline we just created. In the build stage, hit "Retry."

After a few minutes, you should see the pipeline fully deployed.

To truly demonstrate that our CI/CD pipeline works, we create and push a change in our master branch. We should then be able to see it on our website a few minutes later.

(4.1) To demonstrate that something has changed, we show the site before adding a change. Get your ALB's URL and paste it in your browser. If you aren't sure where to find the URL, step 12.1 of this post demonstrates how to look for it.

You should be able to see this site: 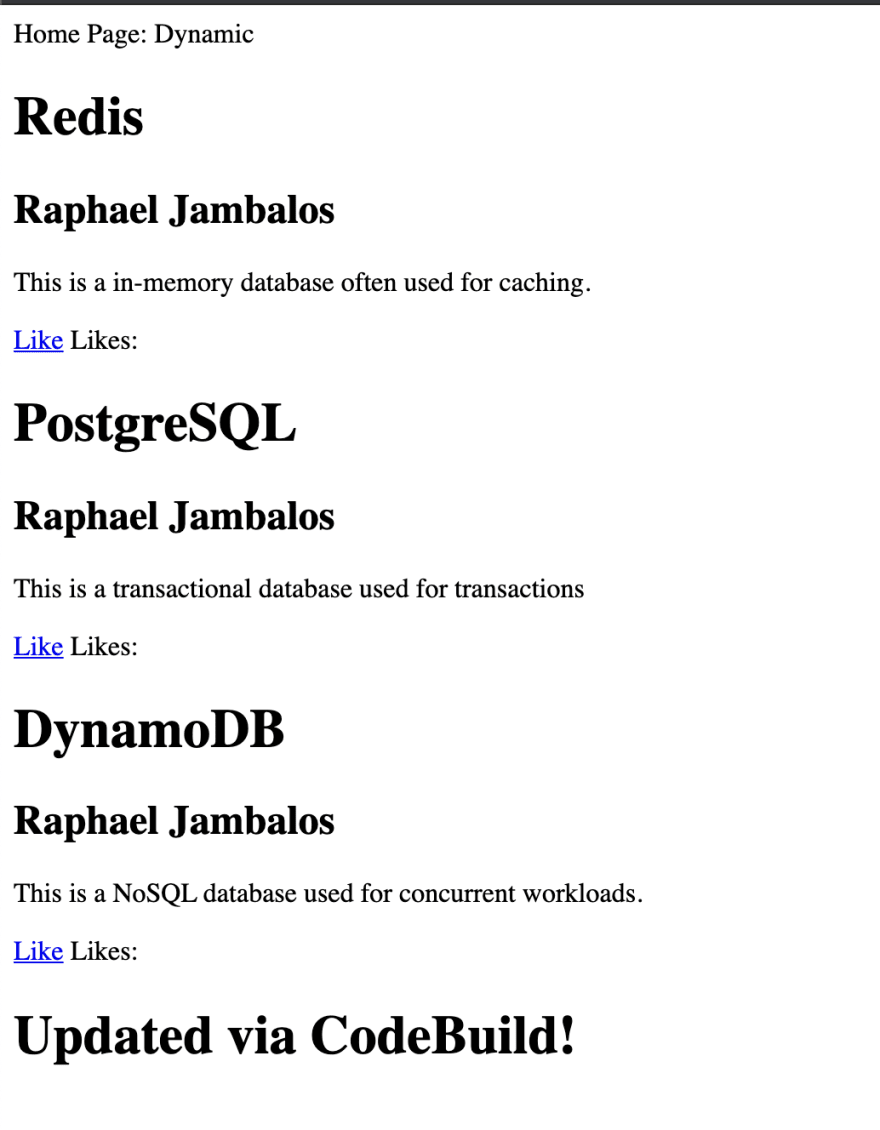 (4.2) Let's go back to the application code. In the app/views/home/index.html.erb file, let's add a new line at the bottom.

And then, let's commit and push this code:

(4.3) After pushing your update, you should see that our CI/CD pipeline is once again busy at work: 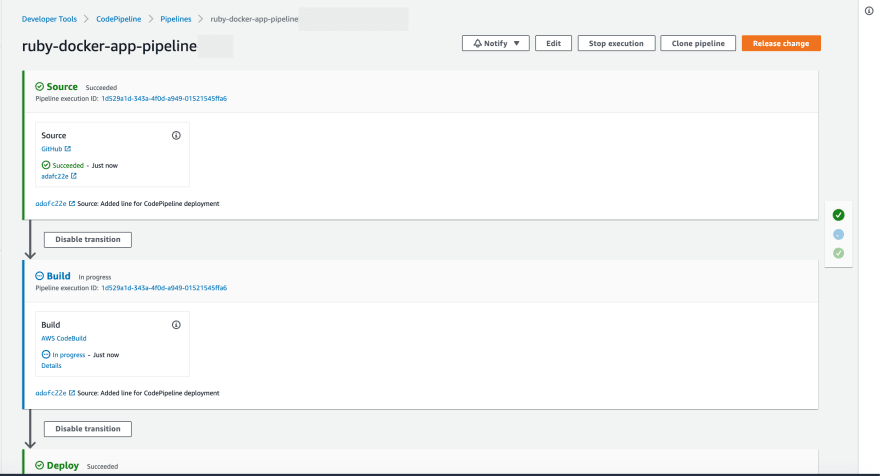 (4.4) After a few minutes, you should see our code update live on our website. 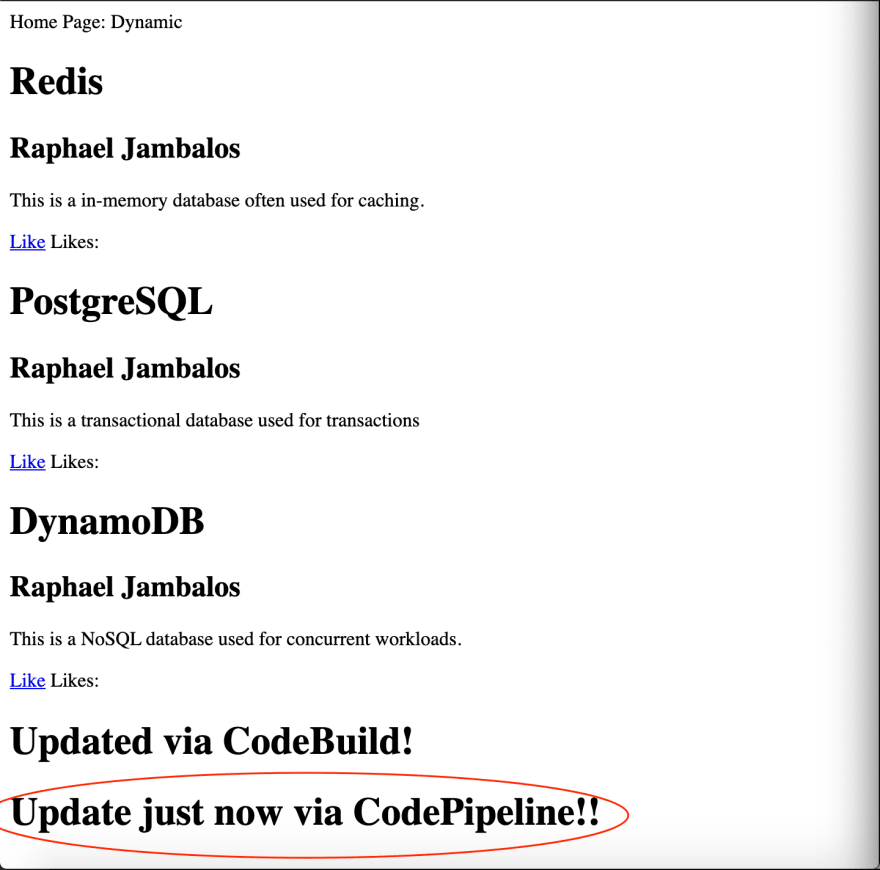 You built your own Rails app in Docker and created a full CI/CD pipeline for it! You are now ready to take full advantage of CI/CD for your team.

Getting to this stage is no small feat. If you need any help implementing the walkthrough above, just let me know. Feel free to leave a comment below, or message me! I'd love to hear from you!

Once unpublished, this post will become invisible to the public and only accessible to Raphael Jambalos.

Thanks for keeping DEV Community 👩‍💻👨‍💻 safe. Here is what you can do to flag raphael_jambalos:

Unflagging raphael_jambalos will restore default visibility to their posts.