In the past 2 posts, we built a Rails app in Docker and deployed it in Amazon ECS. In this post, we will use AWS CodeBuild to automate building Docker images and deployments in ECS.

This post is not necessary to set up a functional CI/CD pipeline for our Rails app. This CodePipeline post is much shorter and gets you up and running faster. But if you want to have a deeper understanding of CodeBuild, read along

We will be using Rails for this blog post. If you're using other web frameworks (i.e Sinatra, Django, Flask, etc), this blog post can serve as a reference on automating your deployments in ECS.

CodeBuild is a fully managed build service in the cloud. It eliminates the need for build servers, which are on 24/7 but are used just a few minutes every deployment.

Before we understand what CodeBuild can do for an ECS setup, we have to run through how a typical deployment is like without it. The steps here are just an overview. For a detailed discussion on how each step is done, click through the link and go to the section specified:

After integrating CodeBuild, our deployment is now reduced to 3 steps:

If the reduction in steps (from 7 to 3) made you consider automating your deployments, check out these other benefits to having CodeBuild:

Since CodeBuild is just an automated build service, it still needs to perform the steps above. With CodeBuild, though, you don't manage the servers that do the build. It is run inside a Docker container with the runtime/s necessary to build your application. You just need a place to enter all those configurations.

The primary concept in CodeBuild is the Build Project. It answers four questions needed to operate a build server:

Where is the source code?

CodeBuild pulls your code so it can build an artifact from it (for Docker deployments, this is the Docker image). You have to specify where it can pull your code, and give it the necessary permissions to do so.

What build environment are we going to use?

CodeBuild uses a Docker container to build your application. The build environment defines what runtime, OS, and tools will be in the container. These will be available during your build process.

The end goal of our build is to produce a Docker image out of our application code. Hence, the build environment we will choose should have Docker pre-installed.

What build command will we run?

This is a series of commands that you typically execute during the build process. These commands are typically stored in the buildspec.yml.

Where will we input the artifact?

Since we will push the Docker image in the build command, we will choose nothing for this option.

(3.1) On the services tab, search for CodeBuild and click it. On the page's right-hand side, click "Create build project". Make sure you are in the same region as your ECS cluster.

(3.2) Since we pushed our application to a GitHub repository, choose "GitHub" for the Source Provider. You will be asked to grant GitHub access to AWS CodeBuild. Do this by clicking "Connect to GitHub". 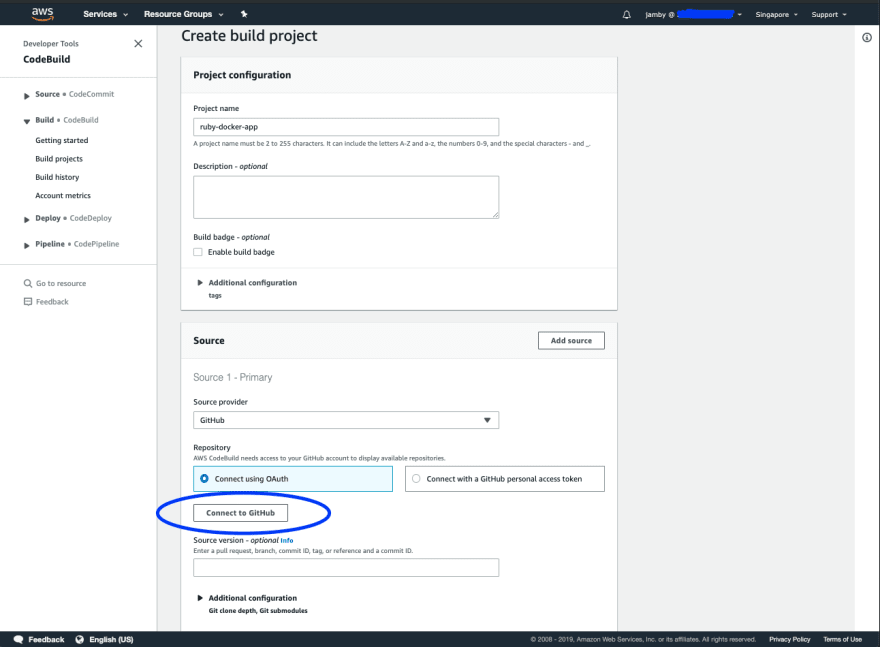 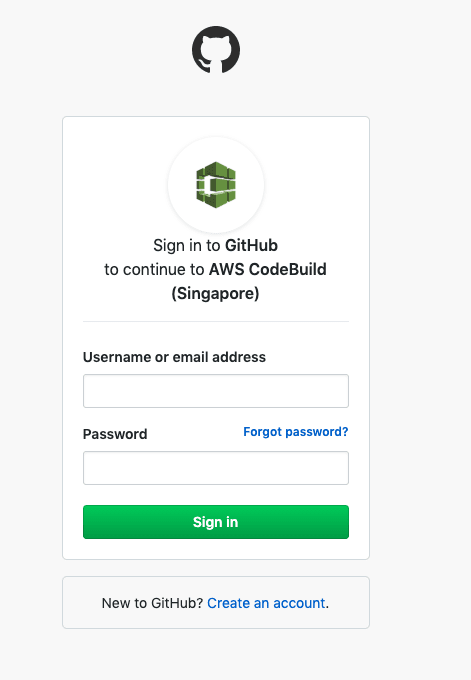 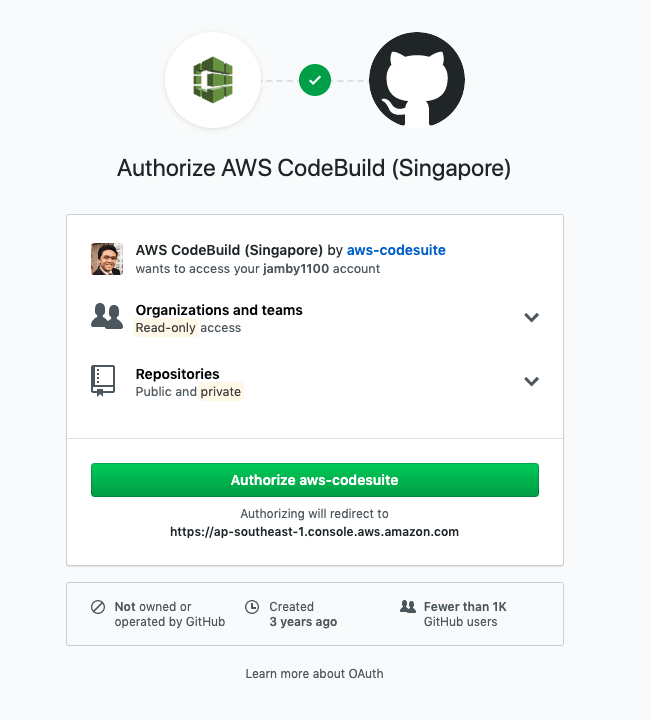 (3.5) After that, you will be directed back to the build project. Add the repository URL. 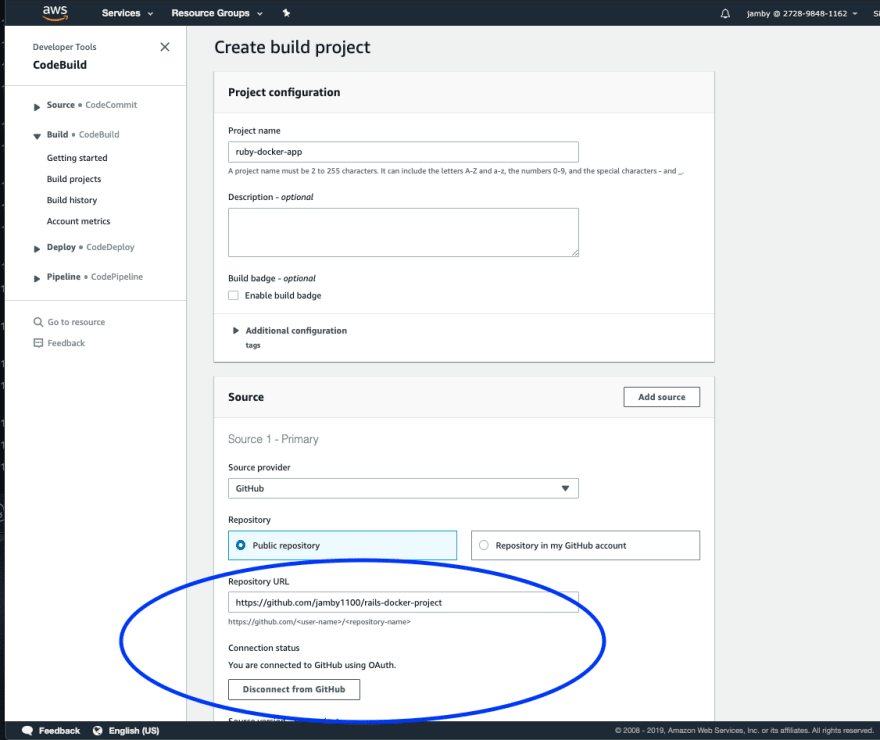 (3.6) Scroll down to the Environment section. 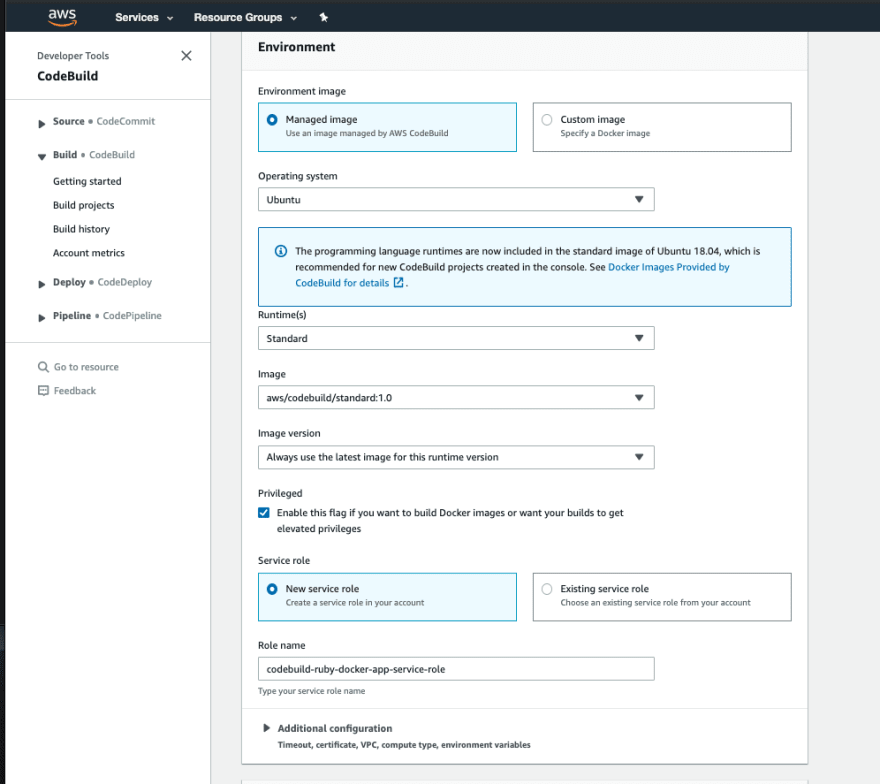 (3.7) You should see this page after creating the Build Project: 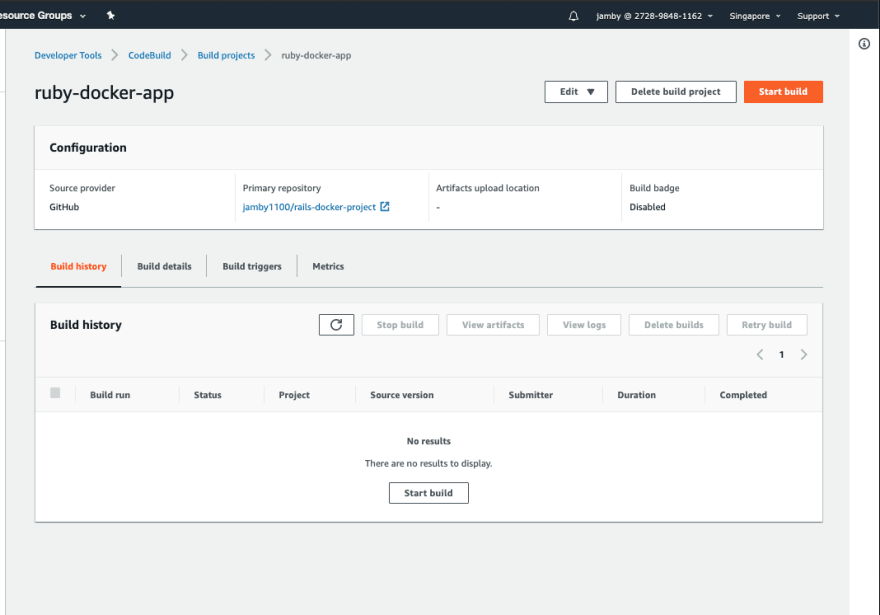 Now that we have our build project ready, we have to set up scripts to do the following:

For this task, I developed 2 Ruby snippets. If your app is not in Ruby, it's okay. We can still use this script since the CodeBuild environment we are using has the Ruby runtime.

(4.1) Create a scripts folder in the Rails root directory by using the command mkdir scripts.

(4.2) Create the file load_latest_image_version_number.rb in the scripts folder. Copy and paste the script from below.

This file looks for the latest image version by getting all Docker images pushed to the same repository name, looping through each one to get the latest tag. Do make sure to change the repository_name variable if your ECR repository is named differently.

(4.3) Create the file update_task_definition.rb in the scripts folder. Copy and paste the script from below. The code is explained in the comments of each block. In this script, you will notice the extensive use of environment variables. Where are those env variables coming from? We will define it in a later section. For now, consider all of them filled up properly.

This snippet is divided into 4 parts. These 4 parts, together, do the following:

(4.4) We also have a buildspec.yml. This file is required for CodeBuild to run and required to be inside the root directory of your application. Consider buildspec.yml as a set of instructions you give CodeBuild on how to build your image.

Typical buildspec.yml documents have 2 main components: (i) version, and (ii) phases. The version is always 0.2. The phases portion defines the lifecycle of a typical build process. For our setup, we choose to define the lifecycle this way:

(4.4) Edit the homepage via vi app/views/home/index.html.erb and add the snippet at the bottom of the file. This will prove that our deployment via CodeBuild was successful.

(4.5) Review the changes you've made. If you're satisfied with them, commit and push to Github.

(5.1) Go to CodeBuild in the services tab. Go to Build Projects, and look for the build project we just created. For me, that's named ruby-docker-app. Click the "Edit" dropdown, and choose "Environment". 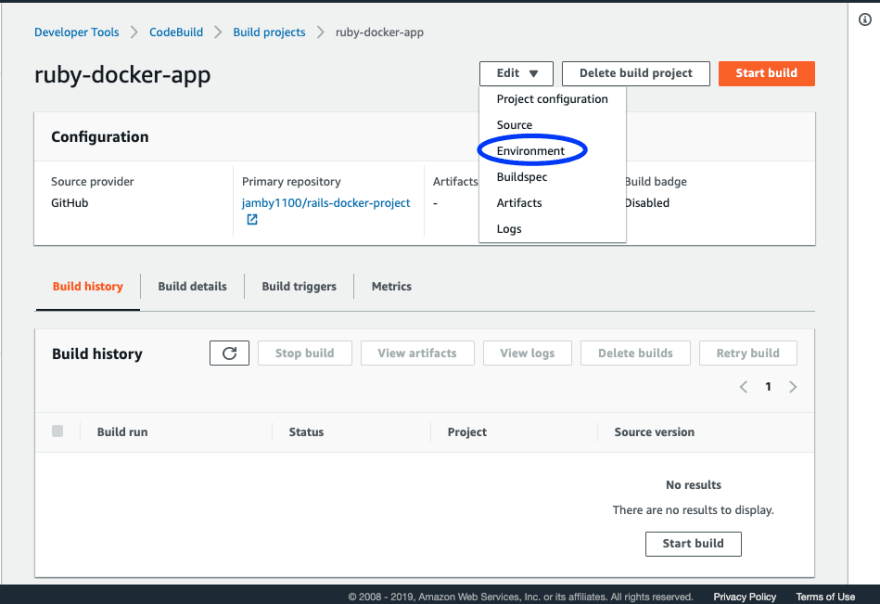 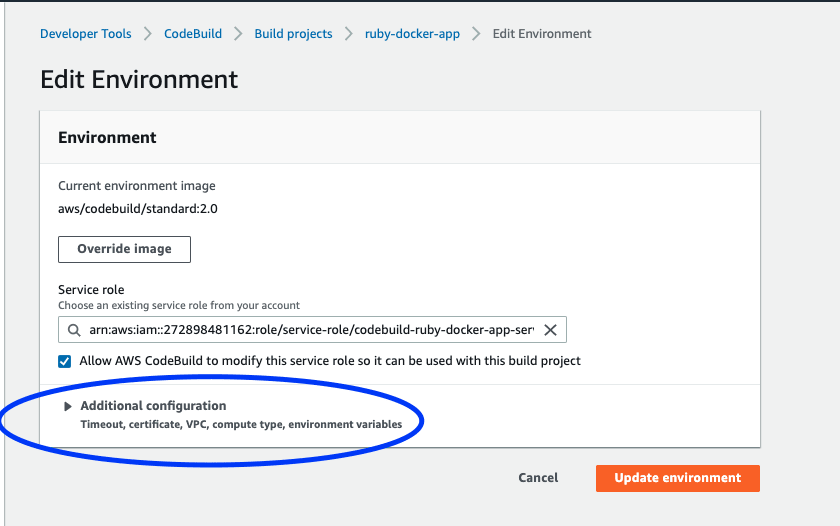 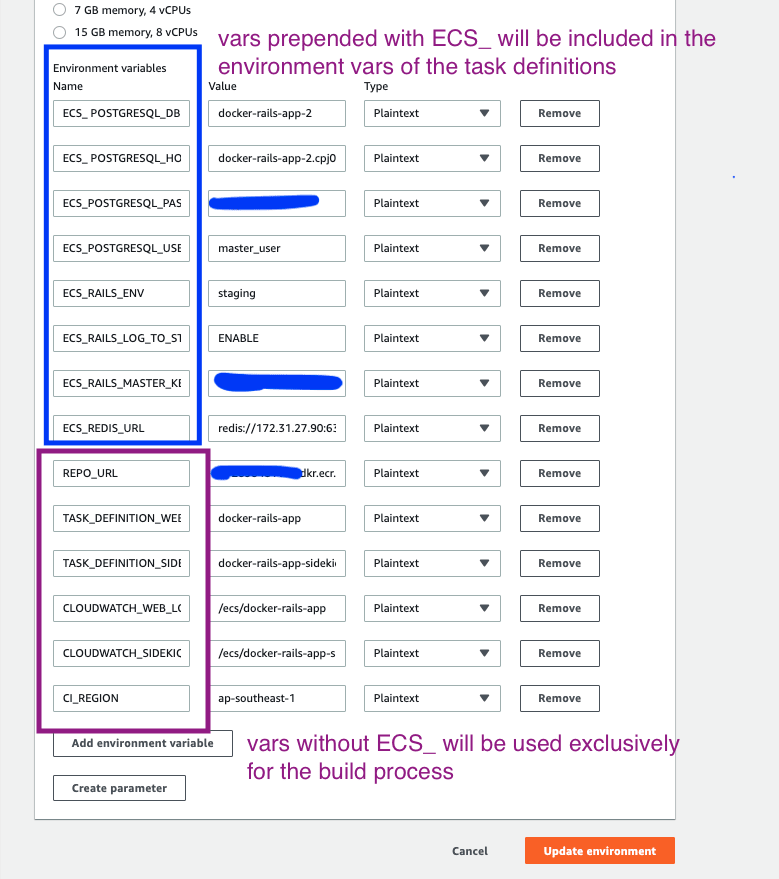 (5.4) After you save it, go back to the build project and click "Start Build". 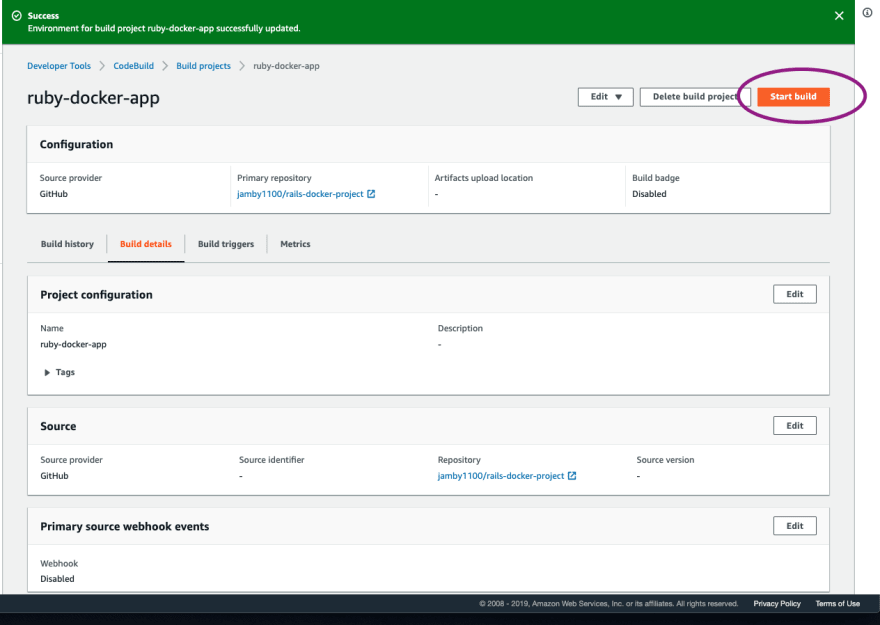 You should see the form below. For the source section, set source version to "master", and then, click Start Build. 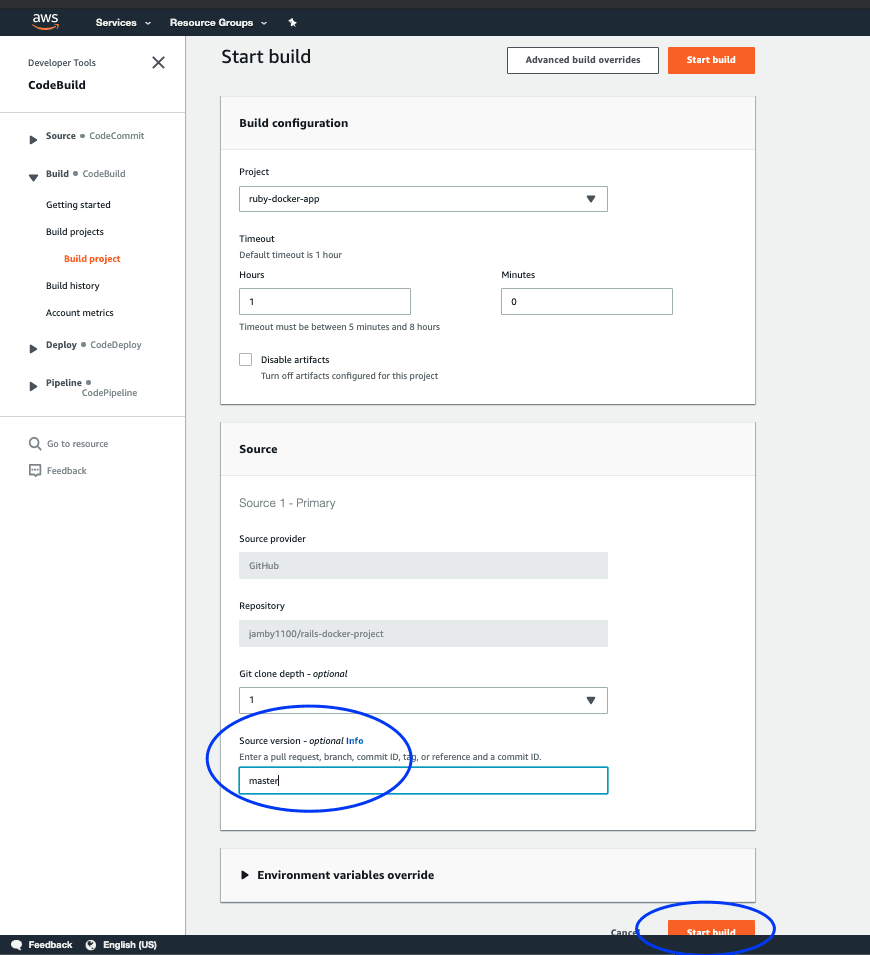 (5.5) You should this screen. If you press 'tail logs', you will see a lot of logs from the build process.

(5.6) The build process will break because we didn't give CodeBuild permissions to access ECR and ECS. In the next section, we will set up the required permissions. 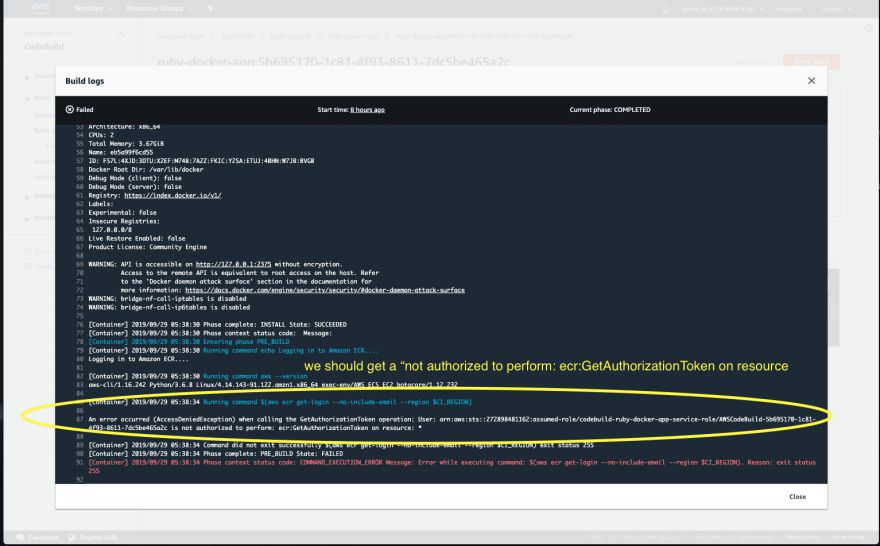 6 | Setting up permissions for CodeBuild

(6.1) Create an IAM policy. Set the option to JSON and paste this JSON below. Make sure to replace the YOUR_AWS_ACCOUNT_NUMBER with your account number. This policy allows us to create Task Definition revisions (without giving ECS full access). 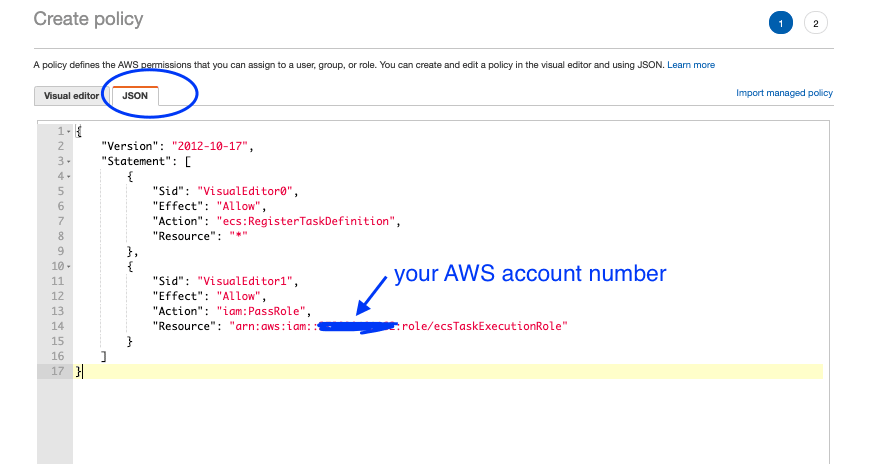 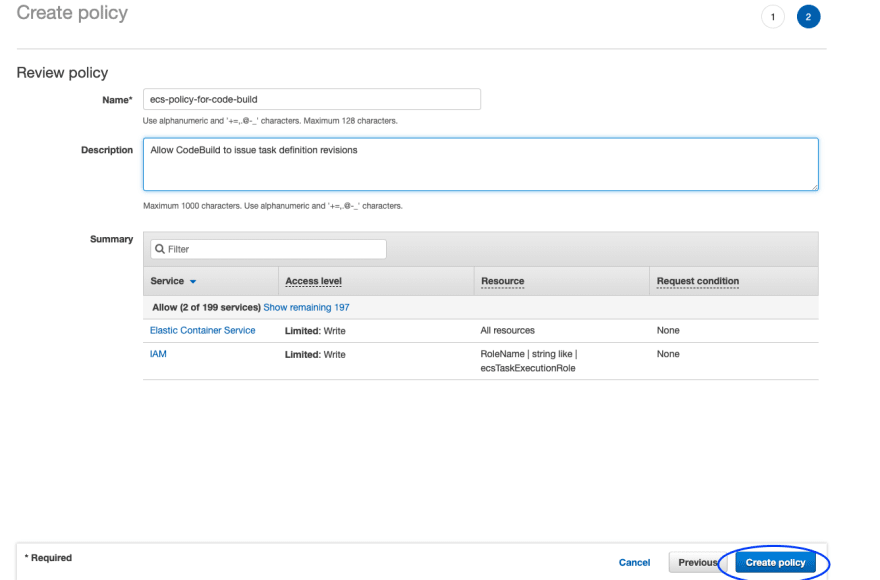 (6.3) Get the name of the build project's service role.

On a separate tab, go to the build project page, click Edit dropdown, and then click "Environment". You should see the service role as displayed below: 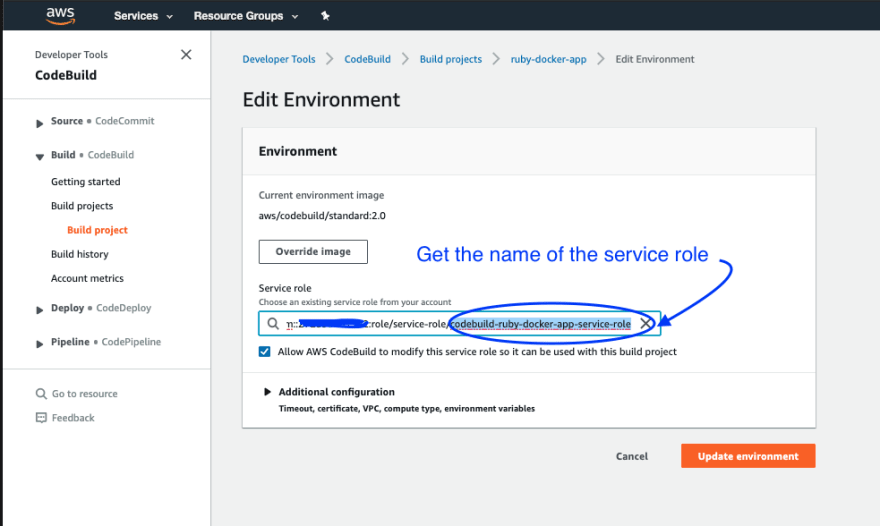 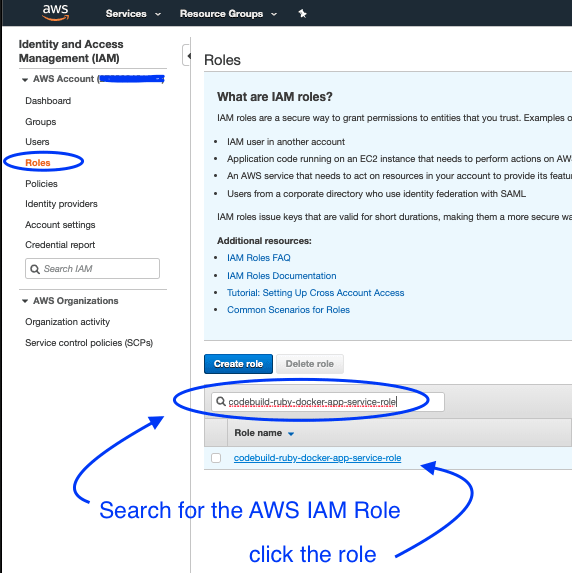 (6.6) Search and attach the AmazonEC2ContainerRegistryPowerUser to provide power user access to ECR. This allows us to get the latest image version, and also to push images in ECR.

Then, search and attach the policy we created in step 6.2. If you followed along precisely, it should be named ecs-policy-for-code-build.

Your IAM Role should now have 3 roles. 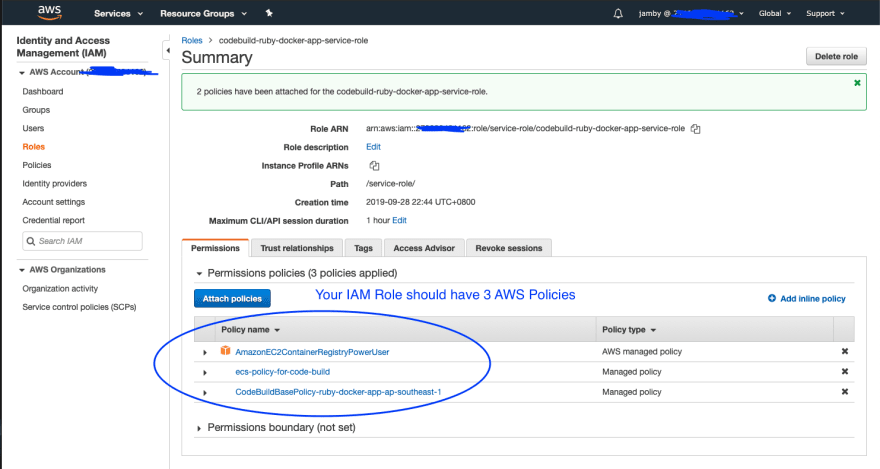 Now, our build project is properly configured to run builds.

(6.7) Run the build again, following step 5.4. Once that is completed, go to the web and Sidekiq services. You should see that there's a new task definition revision (and the task definition currently in those services are now outdated). 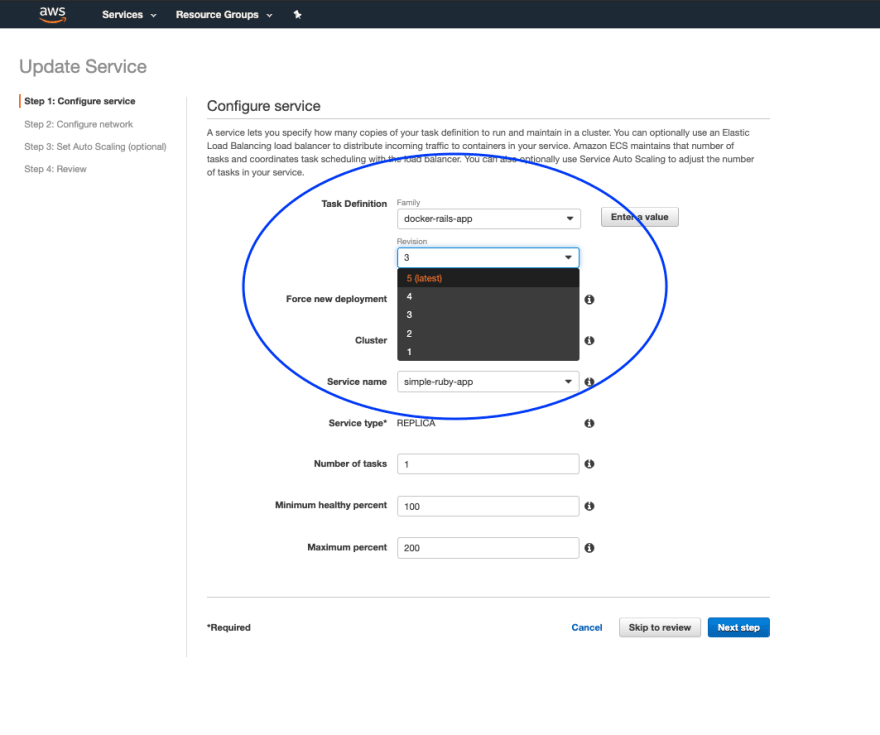 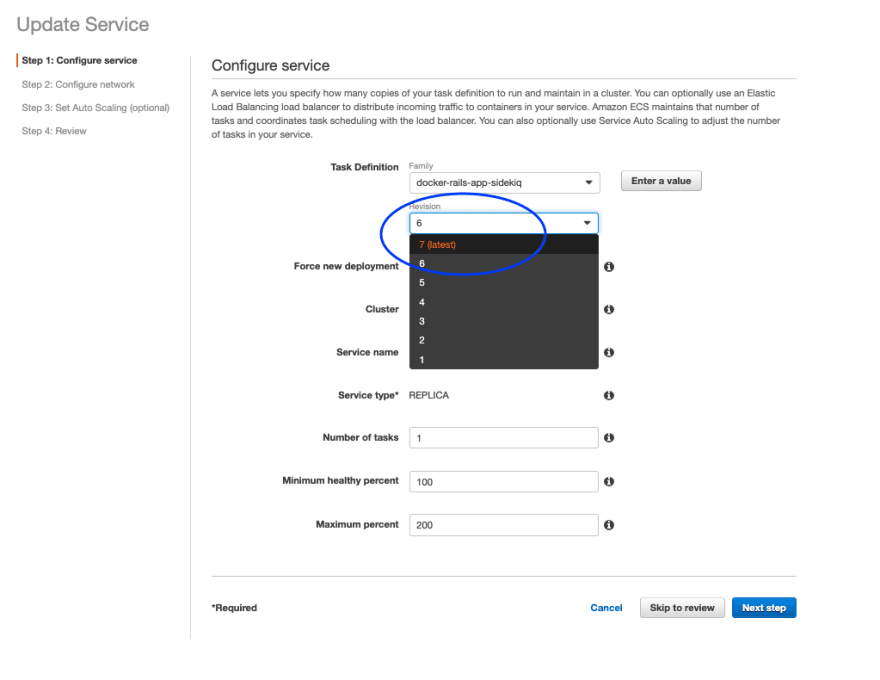 For both services, update them to the latest Task Definition Revision and deploy them. Follow section 17 of my earlier blog post for specific steps on how to do this.

(6.8) Wait a few minutes. If everything went well, you should be able to see the updated homepage with the text: "Updated via CodeBuild!" 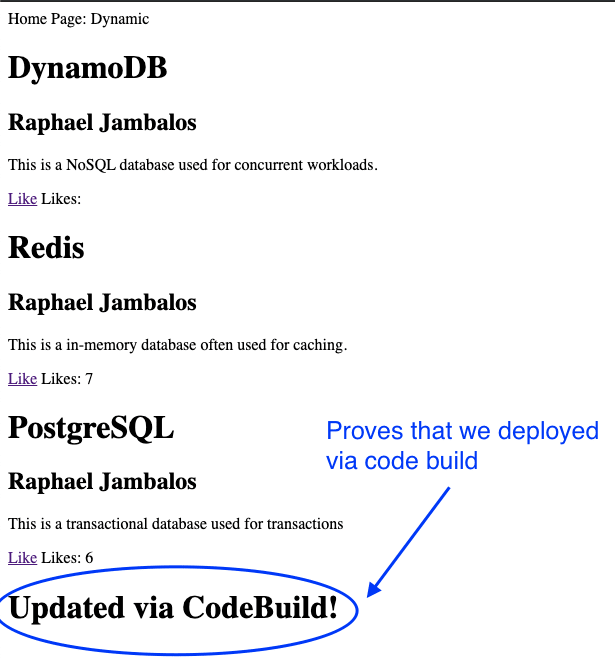 Now, we can deploy our ECS Rails app via CodeBuild! As with any infrastructure project, the bulk of the work is during setup. But after this, your deploys should be much easier!

If you have any comments, suggestions or just want to let me know how this series has helped you, feel free to leave a comment below, or message me! I'd love to hear from you!