This is post is super long but there are pictures (of words).

I made a summary this time:

Where I got the idea to write this post

It all started from an article, titled My (somewhat) complete salary history as a software engineer in which the author, Nicholas C. Zakas, decides to publish his salary history. Reasons are the following:

women make less than men for the same job. That’s something that shouldn’t be happening in today’s world and it’s up to us (read: men) to step up and make things right. This is my attempt to do just that.

In the post he also talks about one of the reasons I think most people are uncomfortable about sharing their current salary or their salary history with the public: if future employers know how much you make, they might try to offer you less than they can.

Other reasons, I think, why people don't share their salaries are fear of judgement, guilt, not wanting to deal with comparisons with colleagues, culture and upbringing.

The value of a salary is also subject to local cost of living, quality of life, seniority, different taxations, different type of company, performance, possible stock options and other things that can wildly vary between company and company. So saying "I make this much" is probably not enough information for an accurate comparison.

The author, who is on a hiatus from the profession because of health issues, at some point says something super super true that made me smile:

Plus, as a white man, I know I’m going to be able to negotiate for my salary without backlash when I do start working again.

This other quote instead reminded me of Buffer and their notorious transparency around salaries:

The bottom line is that nothing gets better unless people are willing to share information.

Buffer even has employees salaries in a public Google doc.

The author is the creator of ESLint by the way :-) He also wrote or co-authored a lot of books.

A tale of a salary history

In a table Zakas lists years of experience, companies, title and starting salary (including bonuses, stock options and other things): 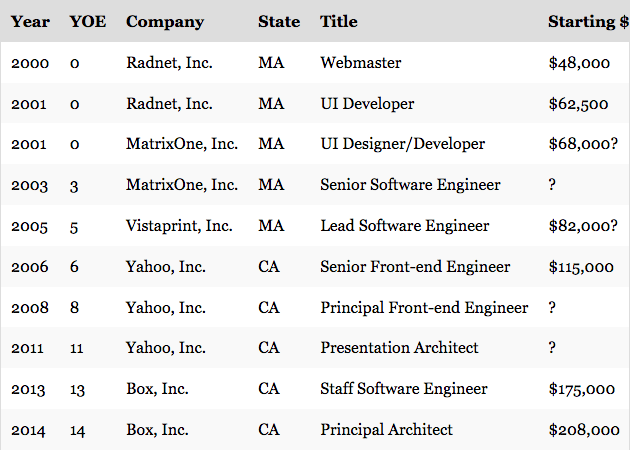 As we hinted at earlier the raw numbers aren't enough to get the full picture, so he goes on enumerating details about each job.

Some of those details:

There are more details about how the jobs were like that you should probably read.

I have two hopes from sharing this information. First, I hope that having this information will make it easier for women to understand how much they should be paid for similar work and just how their pay should be increasing throughout their career. Second, I hope that other men who are in a similarly independent position will also share their compensation history to benefit others.

What happened on Hacker News

The post made its way on HN and it sparked a super long conversation with a lot people sharing (more or less) anonymously their own salaries or salary histories. You can find people who think they are underpaid, some who think they are fairly paid, some talking about the cost of health insurance and people mentioning how transformative was to become a remote worker.

I've screenshotted some comments from HN here that I find interesting or useful for our purposes (I tried unsuccesfully to avoid the humblebrags and the flame wars):

Security architect in the US with lots of experience

This person went from a big city to a small one working remote. I should make another post about how I think that remote working in software development is going to be the future: companies can tap into international talent without the limitations of visas, people can work and live wherever they want and contribute to the local economy, they can say goodbye to commuting and so on. Yes there are disadvantages but I feel like most companies say no out of principle or because they've never even thought about it.

Everytime I see a company interviewed by the media complaining that "we have a bazillion open positions and nobody wants to work for us" I then check the careers page and usually find zero remote jobs, especially if such companies are based in areas away from tech hubs.

Software dev in Estonia with a few years of experience

Not sure why the title became senior after two years, a testament of how titles can be meaningless :D In their defense they added that the total is 7 years of experience (some not mentioned there as a freelance) and that the title was assigned by the employer.

Another person at some point even says:

I got promoted to "senior" developer less than 6 months out of university because my employer wanted to inflate the credibility of his consulting business.

Anyway, the numbers in this example are closer to my experience in Italy and France.

It seems that in India is pretty common to ask for previous salary (which seems less and less common in the west), which can complicate an upward salary trajectory.

Germany, Denmark, Norway, Switzerland, Sweden etc... We all basically opt for more time off than more pay.
And this is possible in part due to the high taxes; we have no medical bills, no education bills, pension is taken care of, etc.

So yes, you might earn less than in SF but there are other advantages.

The topic of the amount of work also came up. Europeans tend to work less than the American counterparts (I don't know the data about "productivity") and enjoy usually more vacation time (four or five weeks is common).

This person lives in northern Italy outside Milan (the biggest tech hub in the country). His salary is low but it's not totally unheard of. A salary of 100K is usually a manager's salary. Also, Italian companies are not famous for allowing techies their own career track outside of "well, now you have a lot of experience, why don't you switch to management?".

Median salary in Italy is 30000€, that's why I think the person in the post is a little underpaid having 10 years of experience. 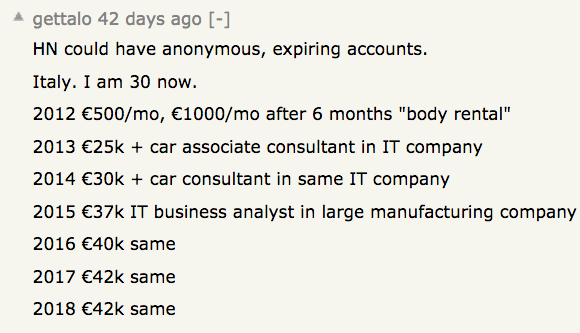 Totally not surprised by these numbers, as I mentioned before.

Security engineer at AWS with 15 years of experience 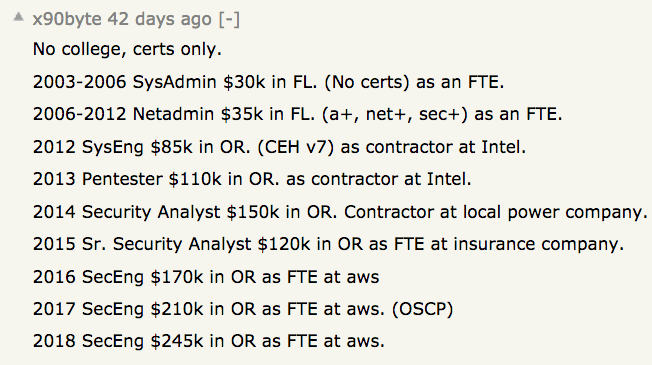 From eastern to western Europe

From Spain to Germany

I LOLed at this

Funny enough being a European citizen working in California seems like the best of both worlds. You'd get very high pay but still have a fallback in the event of illness, injury, unemployment, etc.

Not the first time that I hear about a European coming back to be treated for some illness.

Quality of life over pay and 100K in SF is not a super salary.

There's much, much more in the HN threads, I didn't read them all. People from all over the world have posted their salary histories. Some full time employees, some consultants, others are freelancers. Most people used throwaways accounts for the reason we listed at the beginning.

It's notable how many mentioned that they got raises only by switching jobs, which has been my experience too so far.

Salaries without cost of living and taxation are just a number.

There are none I want to add, I hope it gives people on dev.to some helpful info, which is the whole point of the initial article.

Should I use webflow or wordpress to build static websites?

Demystifying 'this' keyword in JS

How do you prepare for standup meetings?

rhymes
Such software as dreams are made on. I mostly rant about performance, unnecessary complexity, privacy and data collection.
I'm joining the DEV team
#meta #career #personal