As iOS developers, we’ve all experienced the satisfying feeling of finally finishing coding an app and being excited to share it with users. Prior to users enjoying the app, there is only one more thing left to do- release the app to the App Store! Surely, you think it shouldn’t take longer than a few minutes of your time?

In order to reach that step, the following is needed:

These steps are just one approach to deploying your app as there are many more aspects that should be considered, such as dealing with build/version numbers, running tests, uploading beta releases etc.

Why is this so difficult?

Well actually, it used to be difficult but thanks to Fastlane, all of the mentioned steps above can be automated. Continue reading this blog to find out how Fastlane can help you!

This blog will introduce Fastlane, the advantages it provides and present concrete scenarios showing how it automates the deployment of an application. The following examples of automation will be covered:

The focus and examples used in this blog will be for iOS. However, the same principles (and in many cases the same commands) apply for Android as well.

Important note: in order to use Fastlane for iOS, you need to have a paid Apple Developer Account.

Before moving on to how to operate Fastlane, it is important to know what it is and how to set it up properly.

Fastlane is a tool that helps automate the development and release process for mobile apps.

After running fastlane init, Fastlane automatically creates a new folder within the project called ‘Fastlane’. This folder contains two files: Appfile and Fastfile which are used to help automate the deployment process.

The Appfile contains information about the developer and the app, such as the developer Apple email and the app ID of the application. The Fastfile contains different lanes, written in Ruby, which represent distinct workflows, or in other words, different automation tasks. We can create and customize these, however we'd like. For example, a lane can automate releases to Testflight or deployments to the App Store. The Fastfile is the file where developers spend the most time when it comes to Fastlane.

Now let’s look at some examples of how to automate tasks using Fastlane.

In order to successfully upload a new build to the App Store, we first have to create the app on App Store Connect and on the Apple Developer Portal. Although this process is not too complicated, it is still a bit tedious to complete. Therefore, this is a good starting point for automation with Fastlane.

First, open the Appfile and input a few parameters:

These parameters are used so that Fastlane can target the developer, the app and the team. It is not obligatory to input any of these, as Fastlane will ask for all of the missing parameters anyway. Sometimes, it is even easier to not input some of these, as for example the team_id and the itc_team_id since Fastlane automatically finds and lists out all of a developer's teams.

After setting up the Appfile, we will move onto the Fastfile. Open it, remove everything and input the following:

In essence, this lane utilizes the produce command, in order to create a new app on the App Store Connect and Apple Developer sites with a fitting description. The lane is named app_create, but this is arbitrary and can be changed to whatever is most suitable.

Now navigate to the app directory in the terminal and run the command fastlane app_create. Fastlane will prompt the user to input an app name. Make sure it is unique. After the process successfully completes, log in to App Store Connect and the Apple Developer Portal and the new app should now be visible in both places.

After the application is created, it is time to generate the required certificates for the app.

The following are some benefits of using Fastlane in order to generate certificates:

Follow these steps in order to generate the certificates and provisioning profiles:

Open the Matchfile, and input this:

This will create the development, App Store certificates and profiles for the application. Easy as pie.

Deploy to Testflight with Fastlane

After reaching a certain point in development, we'd like to deploy the app to a selected number of testers who can provide us with feedback. With Fastlane, it is possible to fully automate this release. Let's do this by creating a simple lane for beta release:

Run the fastlane beta command in order to execute the lane.

The idea behind it is to first run all the tests with the scan command since if they fail, Fastlane automatically stops the execution of the rest of the script.

The upload is now fully automated. However, if we were to log in to the App Store Connect, we would see that before actually submitting the app for beta release we would need to also input the test information for the app. Since Fastlane is used, it would be handy to also automate this input. In order to achieve this, the beta lane could look something like this:

Now when we run the fastlane beta command, all of the test information is uploaded to Testflight, in addition to the binary.

Note that the localized_app_info action may not work but remains in this blog for demonstration purposes.

Deploy to App Store with Fastlane

After the testers have reviewed the application, it is finally time to upload the app to the App Store. Now we’ll examine a number of steps in order to automate this:

Run fastlane init deliver in the command line. This will create a number of new folders and files in the Fastlane directory. This includes a Deliverfile, a metadata folder, and a screenshots folder. This is how the Fastlane folder currently looks like:

The purpose of initializing the Deliver file is so that we can input all of the required metadata and screenshots locally, before submitting it to the App Store. This will then greatly help automate the process. Here is how the new metadata folder is structured: 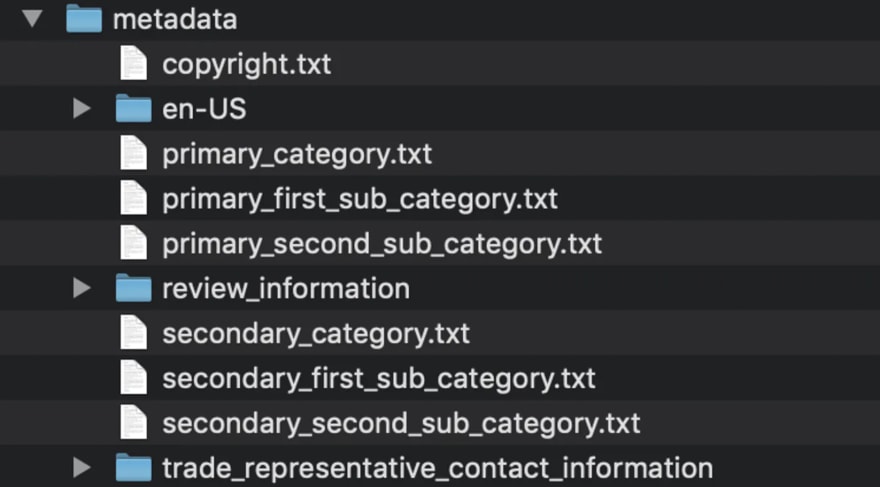 Go through the metadata folder and input all of the different parameters. The en-US folder contains the app information for the English-US language. It is possible to input all of the app's language in the same way, just using different language codes. The app's metadata is now ready to be uploaded.

Fastlane takes advantage of Apple’s UITesting framework in order to automate screenshots. The basic logic behind it is to run UITests and when a certain point in the test is reached, Fastlane’s snapshot function should be used to capture a screenshot. For example, you can take a screenshot after the UITest executes typing in a username text field on a login screen like this:

We will not be covering how to write tests for automating the screenshots but there are many tutorials online and it’s a fairly straightforward process.

In order to set up automated screenshots we can do the following:
Run fastlane snapshot init in the project directory. This will create two new files in the Fastlane folder; one called Snapfile and the other one called SnapshotHelper.swift.

Go into the Xcode project and navigate to File -> New -> Target. In the pop-up that appears, find the iOS UI Testing Bundle and press next.

On the new screen, change the name of the UITests or leave everything as it is and press finish.

A new folder in the XCode project with the UITests is created. Find the previously created SnapshotHelper.swift and drag and drop it into the new UITests Folder. Note: Make sure to copy it correctly by selecting both the "Copy items if needed" and the UITest target button and then deselecting the project target.

Open “Manage Schemes” in the Xcode project and make sure that both the “Show” and “Shared” checkboxes for the created UITest Schemes are checked.

In the same window click on the newly created UITest Scheme and press “edit” and then in the new window, window press “Build”.

This will show the UITest Target with a number of checkboxes. Make sure the checkboxes named “Test” and “Run” are checked. Fastlane can now access the UITest target scheme.
Open the Snapfile, and input this:

Now everything is ready for you to capture the screenshots. Input these lines of code in your UITest function in order to utilize the SnapshotHelper.swift:

As I mentioned before, we'll not be covering the actual writing of the UITests since every application has different and specific screens. Therefore, it is the reader’s task to now create the UITests to automate the screenshots of the app.

After writing the tests, run fastlane snapshot in the terminal and if everything is set up correctly, the screenshots will be taken.

Building and Uploading to the App Store

With the deliver file created and screenshots automated, the next step is to upload everything to App Store Connect. A couple of lanes will be individually created for each of the tasks required for the release and then combined together in order to make one lane for the entire release process.

The first lane is for testing:

The next lane is for taking screenshots:

The third lane is for building the application:

The fourth lane is to upload the binary:

Now all of this can be combined into a single lane called release:

In addition to the created lanes, the match command is added in order to make sure that the certificates are up-to-date and the ensure_git_status_clean is used to make sure that you are working with a clean Git Repo. With this setup, the version number must be manually incremented. Keep in mind that Fastlane has actions for automatically incrementing version numbers. View this link for more information.

Navigate to the project directory and run fastlane release and watch the magic happen!

As you can see from this blog, Fastlane is a powerful tool used for automated deployment. Once you become comfortable using it, the scripts and automation tasks will become more advanced and suited for your exact needs. If you feel hesitant about giving it a try, just start with small automation tasks and build upon that. After some time, it will definitely become an important tool in your toolbox.

Once suspended, rubicon_dev will not be able to comment or publish posts until their suspension is removed.

Once unsuspended, rubicon_dev will be able to comment and publish posts again.

Once unpublished, all posts by rubicon_dev will become hidden and only accessible to themselves.

If rubicon_dev is not suspended, they can still re-publish their posts from their dashboard.

Once unpublished, this post will become invisible to the public and only accessible to RUBICON.

Thanks for keeping DEV Community safe. Here is what you can do to flag rubicon_dev:

Unflagging rubicon_dev will restore default visibility to their posts.