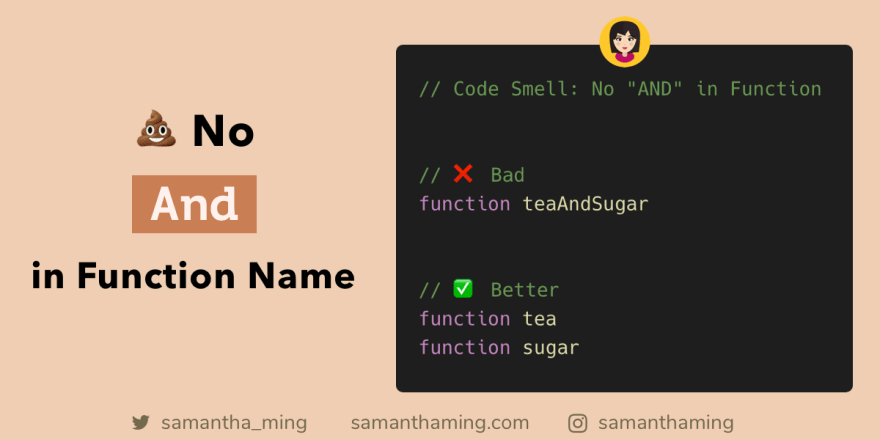 Function should adhere to the Single Responsibility Principle - meaning it should do one thing and one thing only. So if your function name includes "AND", it means you're doing too much. Solution? Remove the "AND" and split it into separate functions 👍

Every module should have one single responsibility. This means two separate concerns/responsibilities/tasks should always be implemented in separate modules.

And the Rationale behind is:

When this rule is not adhered to, one module has several tasks. If one of these tasks changes, there is the risk that this also has an effect on the other task that normally should be independent. Thus unrelated functionality may break.

When you follow the Single Responsibility Principle, you create a code base that is more flexible and modular.

Buying pre-mixed ingredients limit you to recipes that require ALL 3 items.

Another great thing with sticking with this rule is maintainability. When you just start out, sure it may seem a lot easier just to put everything together. But I guarantee you that over time, as you add more functionality or make changes, one singular function that does everything becomes very messy to maintain.

Let's explain this with another non-dev term explanation. Let's say you're a big Lego builder and you bought yourself a brand new Lego set. You're super excited you open the new set and dump all the pieces into a container. Unfortunately, you have a final exam the next week so you have no time to build it yet. A few weeks later, your rich aunt buys a few more Lego sets. I mentioned your aunt is rich because we all know Lego sets are ridiculously expensive 😂. Again you open the new set and dump them in the same container, thinking that it's no big deal. Not to be outdone by your rich aunt, your rich grandma also wants to win your love, so she buys more Lego sets for you. Again, you didn't think it'd be a big deal, you open everything and dump them all in the same container. Okay, a few weeks have passed and now you're ready to build your Lego sets. Guess what happened? You're now knocking your head against the wall. Because all the pieces are mixed into one single container and you don't know which is which. However, if you had kept all the Lego sets in its own container, you wouldn't have this problem 💩

That's why one function should do one thing and one thing only. When it's doing more than one thing. It may not seem like it now, but over time and with changing requirements, this function will become bloated and it will become extremely difficult to maintain.