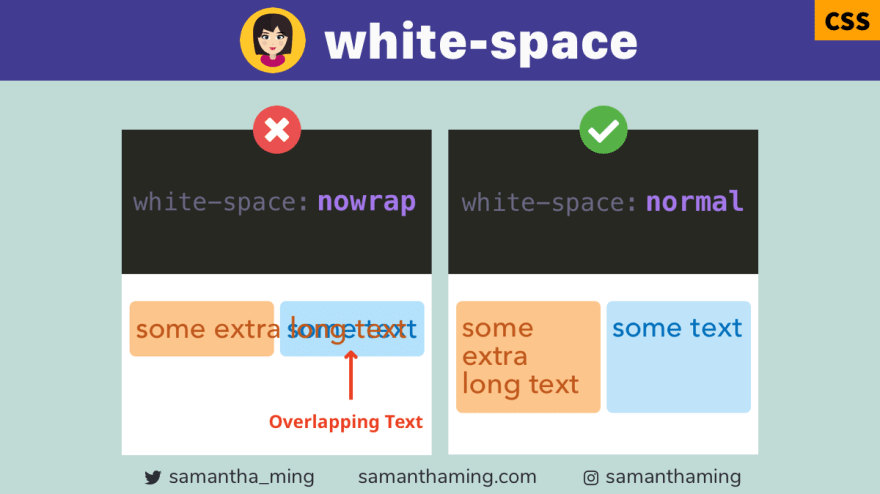 However, nowrap can sometimes lead to overlapping text. You can easily fix it by setting the white-space to be normal 👍

Why does text overlap occur?

Let's dig into it a bit deeper why text overlap occurs.

Even though, we have nowrap set, there is no overlapping. Great! But let's see what happen we set a fixed width on our boxes.

Oh no 😱 The overlapping is upon us! This is happening because the default is width: auto . Which means the boxes would expand based on its content. However, when we slap a fixed width, we restrict it from growing. And with no where to go, the text bleeds into its sibling box 🤭

We can easily fix this by changing our white-space to normal.

Of course, you can also fix this by removing the fixed width (ie. width: auto) if you don't mind the box expanding. Which is better? Well, it all depends on the User Interface you want to design 🙂

Use case of nowrap

Before you jump to the conclusion that nowrap is no good because it can cause overlap. There are instances where I want to preserve the original form of my text. Because the text breaking apart would render the result unintentional effect and create an awkward user interface and hurt user experience.

Advantage of nowrap for code display

For example, in code blocks, I don't want the text to wrap. Text wrap would make the comprehension of my code example difficult. Instead, I want to preserve it on a single line and have the overflow trigger a scroll bar. 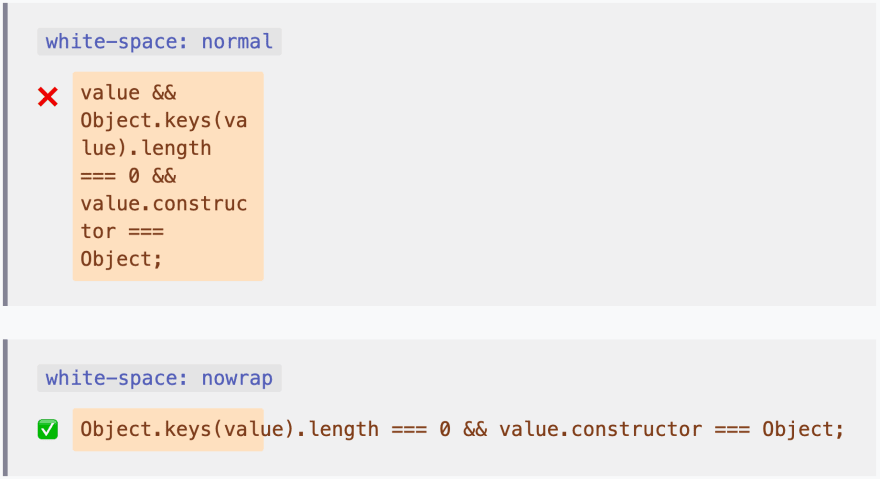 Advantage of nowrap for links

Sometimes when you create a "Learn more" or "Read more", you might append a caret "»" or "›". And you want this text to be together because breaking them apart can create an awkward result.

There's more values you can set with white-space:

I plan to cover each of these in great details in a future code tidbit. In the mean time, if you want a head start, check out MDN docs: white-space 👍

Assume Positive Intent When Working on Existing Code Base

When you're working on existing codebase, we often run into code that doesn't makes sense. But before you go all git blame 😅, let's assume positive intent. As developers, we always try to plan for the edge cases. But often, we won't really know until we push up the code and let our users start using it. It's very difficult to 100% understand the full extent of our implementation. We do our best but we might miss a few spots. Quite frankly, it's why developers still have a job. Most of the time, we're doing bug fixes 🐞

We shouldn't be afraid to make changes. In fact, it's how we progress and become better. During our attempt to improve things, we're going to make mistakes. When that happens, don't spin your wheels playing the blame game or be quick to negative judgement. We need to be empathetic that we all went in with the best intention. The important thing is, we need to learn from our mistakes, fix it swiftly, and continue moving forward 💪

@KyleDaltonSmith: text-overflow: ellipsis can also help in the right situation.

@longlho: white-space property has quirks around certain scripts that don’t use whitespaces so it’s not 100% i18n-safe.

How to show featured posts in Ghost blog