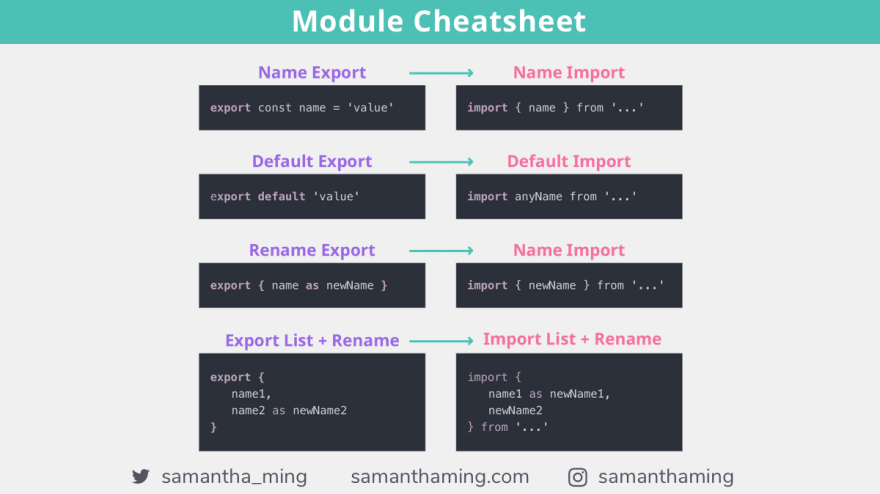 Here's a cheat sheet to show you the different ways of exporting and the corresponding way to import it. It really distills to 3 types: name, default, and list. Just make sure your export matches your import way and you will have no problem 👍

The key here is having a name. Hence a "named" export lol 😂

With a default export, you don't need any name. Because you can name it whatever you want 👏

❌ No Variable Declaration with Default

You can absolutely combine default and name export in one file 🤝

One important thing to note is that these lists are NOT objects. Yes, I know it looks like it. But it isn't. I made this confusion when I first learned modules. It's not an object, it's an export list!

Not happy with the export name. No problem, you can rename it using the as keyword.

The same rule applies to import. We can rename it using the as keyword.

There's been a lot of debate whether one should use default export at all. Check out these 2 articles.

Like with anything, there is no right or wrong answer. The right way is always what's best for you and your team. But here's how I can think of this debate. Samantha's Story Time ...

Let's say you owe your friend some money. Your friend says you can pay them back with cash or e-transfer. Paying through e-transfer is like a named export because your name is attached to the transaction. So if your friend is forgetful and starts chasing you down claiming that you still owe them money. You can simply show them the proof of transfer because your name is on the payment. However, if you had paid your friend back with cash, which is like a default export, you have no proof. They can say the $50 is from Susan and NOT you. The cash has no name attached to it so they could say it's from you or whoever it is 😵

So is it better to go with e-transfer (named export) or cash (default export)? Well that depends, do you trust your friend or not 🤔 Actually, that's not the right way to frame this dilemma. A better solution is to NOT put your relationship in that position. It's better to be explicit so you don't risk jeopardizing your friendship. And yes, this idea also applies to whether you pick named or default export. I prefer to be more explicit, so your code is crystal clear. But of course, your code is your code. And you can do whatever works for you and your team 😄