Docker containers are extremely useful when it comes to CI and CD. As a developer, I was amazed with its possibilities and ease of use. What I didn’t know when I started using Docker is that I did it all wrong.

After couple of months building and pushing containers to our private Nexus Registry, our devops approached me and said “Hey, your images took all the disk space of the registry, might want to check if they are a little bit oversized?”. 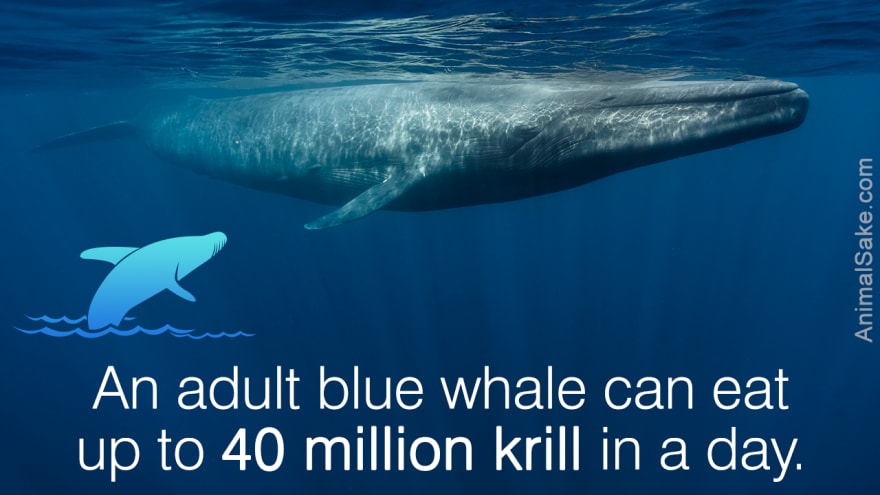 I had two docker images, one for Python application and one for Java. Their total size was whopping 6.5Gbs without applications themselves. After all enhancements it’s 1.4 Gb for Python and 660Mb for Java, applications’ binaries included.

In this article I will cover tips and tricks for optimizing docker images size, which will save you registry disk space and (re)deployment time.

First thing to do would be extracting common stuff from your images.

All the common libraries, files should be in a base image, so they would be cached inside docker layers. For my case I moved Apache Thrift and custom log rotation utility (which is build from sources) to baseline image, instantly saving 350Mb worth of space. 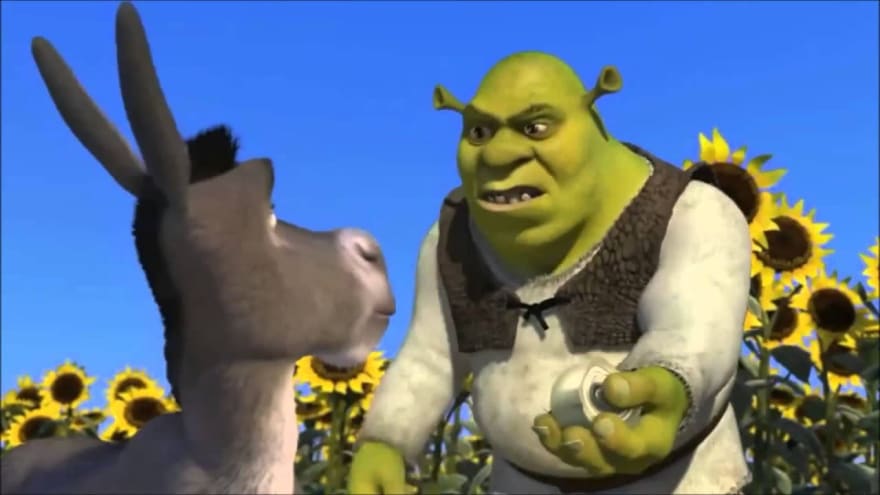 Each docker image consist of series of layers. These layers are changes made to the image with commands like FROM, RUN, COPY, you can think of it as a commits in a git repository. Docker makes use of union file systems to combine these layers into a single image. Union file systems allow files and directories of separate file systems, known as branches, to be transparently overlaid, forming a single coherent file system.

Keep an eye for temporary files

Layers come in handy, because they can be reused during build or deploy, but they also can make image significantly bigger.

Looks something like we would write in a bash-script, right? Totally wrong for docker though. Size of our new image is 248Mb. Let’s look into docker history command:

History displays size for each layer

Output suggests that we have 67.2Mb of data twice. That’s because we unzipped in one layer and copied in another and rm in the last RUN command had zero impact on previous layers. So the correct way to optimize this example would be:

All of our commands combined

Notice that there is also a rm -rf /var/lib/apt/lists/ command which will wipe the cache of aptitude. Let’s look at docker history again.

Don’t fall into the COPY trap

The COPY command is used to put data from host machine inside the image during the build process.

What’s bad about COPY is that it creates a separate layer, so the copied data will reside in the image forever. Copying archives or some temporary data is really a bad idea. Prefer wget (or another tool) over COPY if it’s possible or…

Multi-stage builds is a relatively new feature requiring Docker 17.05 or higher. This added the ability to create temporary image and then use it’s filesystem during the build of final image. The basic idea is to install all the dependencies and compile all the sources in intermediate image and copy the result to final image. Let’s have a look at the example:

Looks like we have a lot of build-time only dependencies:

Now we add another build stage and copy binary from the “compiler” image: 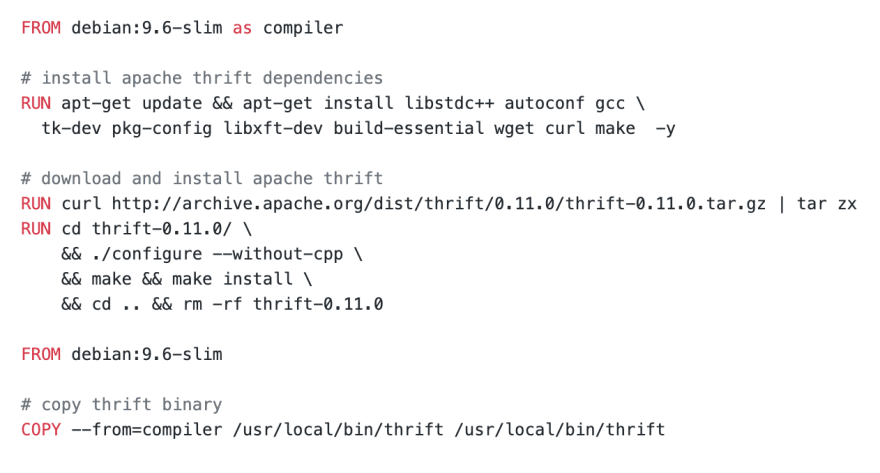 Notice the “--from” argument

Small change and a nice reward:

Be careful though and don’t remove runtime dependencies of a package!

Have you heard of jlink? It’s awesome! You can create your own JRE with only modules you need, which presumably will be smaller than any “slim” image. I suggest using AdoptOpenJDK image as jlink provider. The idea is to create JRE with jlink and then COPY it using multi-stage build:

“baseline” image refers to the first section of article

Using jlink we achieved image two times smaller than the smallest AdoptOpenJDK image. Not to mention the ease of integration between custom JRE and baseline image (a simple COPY instruction). 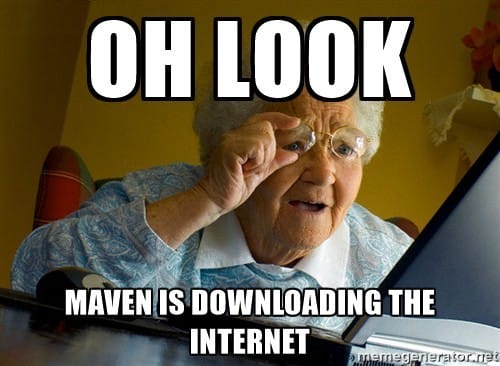 Most of the projects use Maven or Gradle for dependency management. And sometimes we have a lot of dependencies. In our case it was 400Mb worth of jars! Build tools put all the dependency jars inside the main jar file and given the fact that dependencies are not being update very often, we will have a lot of images with the same dependencies. Looks like like a perfect candidate for moving to another layer!

First, you will need to extract dependencies from you project and if they were updated, push them to your registry.

Let’s see how to do it with Maven and SpringBoot. Add excludeGroupIds parameter to your builder plugin configuration: 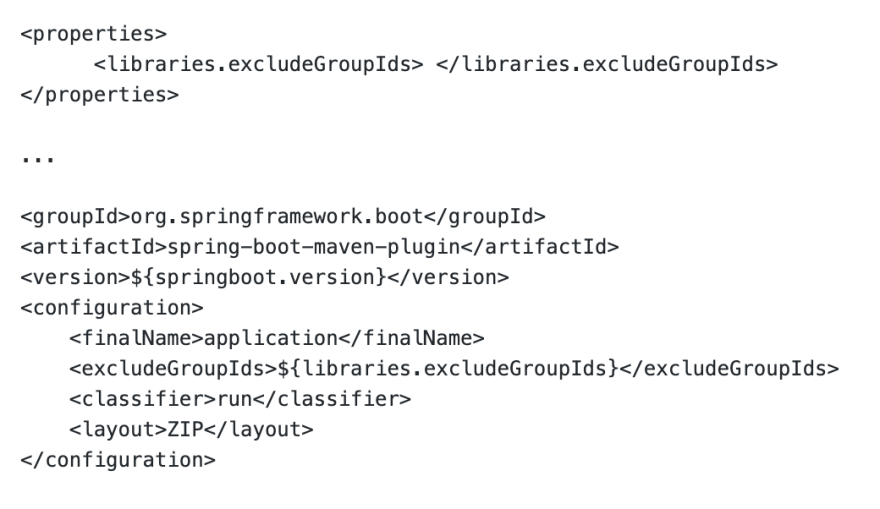 And use this little bash script:

Now, how do we know if dependencies were updated and we need to push them? And how do we use that “dependencies image” as a baseline for application image?

I made this hacky approach where I calculate the md5-hash of pom.xml and try to pull docker image with such hash in version from registry. If it’s not there — create it and push it. This is how I did it:

Next, we pass dependencies hash to application’s dockerfile via ARG command and use it in version of FROM-image:

Note, that now there is a maven/gradle plugin jib that does job similar to what I’ve written above (not applicable to our case, though, because our Gitlab runner clear cache after every build).

I used the same approach as for Java container. I calculate the hash of requirements.txt file and use it as a version for intermediate container.

Inside a dockerfile you should use multi-stage build. In first stage install all the build dependencies and then do pip install --no-cache-dir. In the result stage copy /opt/miniconda3 dir from previous stage.

Let’s look at python-dependencies.dockerfile. Don’t mind the apt-get install section, these are just packages that I needed for my python dependencies. 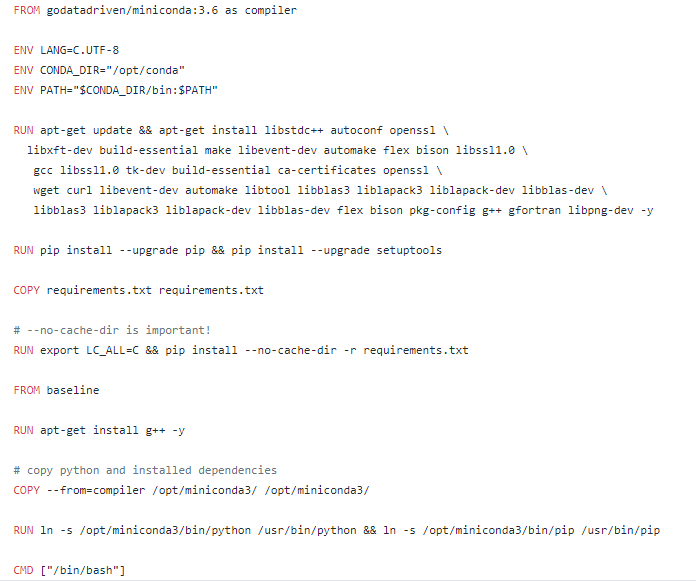 What’s left to do is create the final python image base on dependencies image. I just copy all python scripts (and a bash script for starting python).

Semyon Danilov
Java developer at day, devops at night
Finnaly joined the team of devs at 'dev.to'. I am happy to be here.
#newuser #webdev #discuss #community
Music Monday — What are you listening to? (June 27)
#watercooler #discuss #music
4 Reasons Why Every Developer Should Blog
#beginners #discuss #programming #productivity

Once suspended, sammyvimes will not be able to comment or publish posts until their suspension is removed.

Once unsuspended, sammyvimes will be able to comment and publish posts again.

Once unpublished, all posts by sammyvimes will become hidden and only accessible to themselves.

If sammyvimes is not suspended, they can still re-publish their posts from their dashboard.