This is part 2 on my work on the Hemingway. Read part one on how I deconstructed the app to find out how it worked.

Having figured out how the Hemingway app works, I then decided to implement what I had learnt to make a much simplified version.

I wanted to make sure that I was keeping it basic, focusing on the logic more that the styling. I chose to go with a simple text box entry box.

2) Use what I learnt from Hemingway — every paragraph is a <p> and any sentences or words that need highlighting are wrapped in an internal <span> with the necessary class.

Recently I’ve read a lot of articles about building a Minimum Viable Product (MVP) so I decided that I would run this little project the same. This meant keeping everything simple. I decided to go with an input box, a button to scan and an output area.
This was all very easy to set up in my index.html file.

Now to start on the interesting part. Now to get the Javascript working.
The first thing to do was to render the text from the text box into the outpur area. This involves finding the input text and setting the output’s inner html to that text.

Next is getting the text split into paragraphs. This is accomplished by splitting the text by ‘\n’ and putting each of these into a

tag. To do this we can map over the array of paragraphs, putting them in between 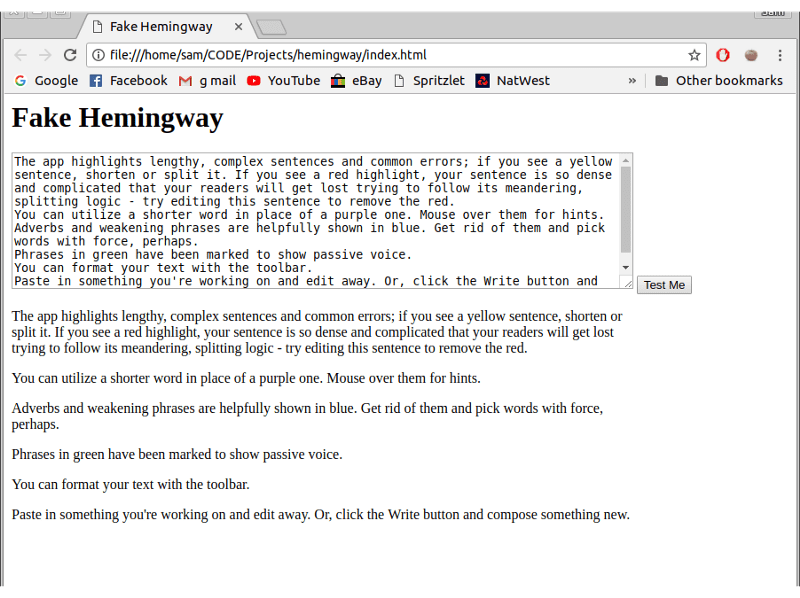 Whilst I was working though that, I was becoming annoyed having to copy and paste the test text into the text box. To solve this, I implemented a Imediately Invoked Function Expression (IIFE) to populate the text box when the web page renders.

Now the text box was pre-populated with the test text whenever you load or refresh the web page. Much simpler.

Now that I was rendering the text well and I was testing on a consistent text, I had to work on the highlighting. The first type of highlighting I decided to tackle was the hard and very hard sentence highlighting.
The first stage of this is to loop over every paragraph and split them into an array of sentences. I did this using a split() function, splitting on every full stop with a space after it.

Using these numbers, I could use the equation that I found in the Hemingway app.

With the level and number of words for each of the sentences, set their dificulty level.

The CSS file is really simple; it just has each of the classes (adverb, passive, hardSentence) and sets their background colour. I took the exact colours from the Hemingway app.

Once the sentences have been returned, I join them all together to make each of the paragraphs.

At this point, I realised that there were a few problems in my code.

My first solution was very primitive but it worked. I used split(‘symbol’) and join(‘’) to remove the punctuation and then appended ‘.’ onto the end. Whist it worked, I searched for a better solution. Although I don’t have much experience using regex, I knew that it would be the best solution. After some Googling I found a much more elegant solution.

With this done, I had a partially working product. 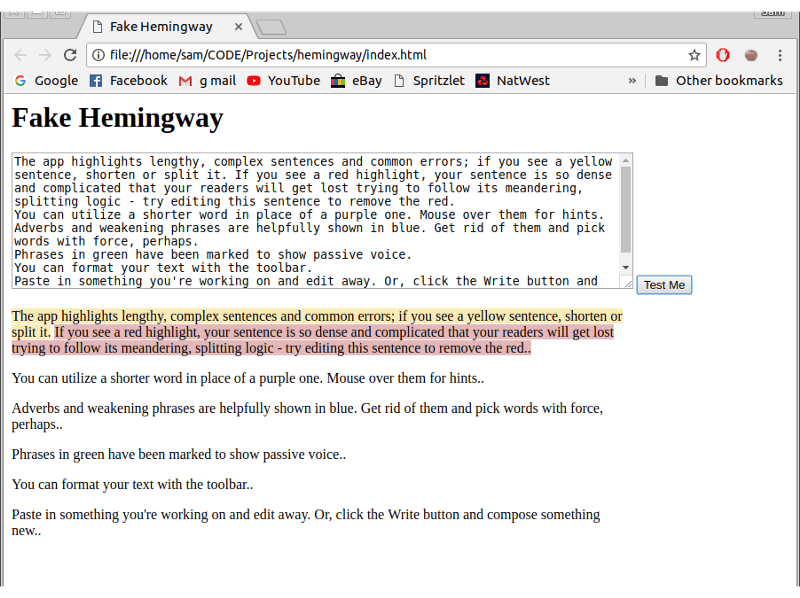 The next thing I decided to tackle was the adverbs. To find an adverb, Hemingway just finds words that end in ‘ly’ and then checks that it isn’t on a list of non-adverb ‘ly’ words. It would be bad if ‘apply’ or ‘Italy’ were tagged as adverbs.
To find these words, I took the sentences and split them into an arary of words. I mapped over this array and used an IF statement.

Whist this worked most of the time, I found a few exceptions. If a word was followed by a punctuation mark then it didn’t match ending with ‘ly’. For example, “The crocodile glided elegantly; it’s prey unaware” would have the word ‘elegantly;’ in the array. To solve this I reused the .replace(/a-z0-9. ]/gi,””) functionality to clean each of the words.
Another exception was if the word was capitalised, which was easily solved by calling toLowerCase()on the string. 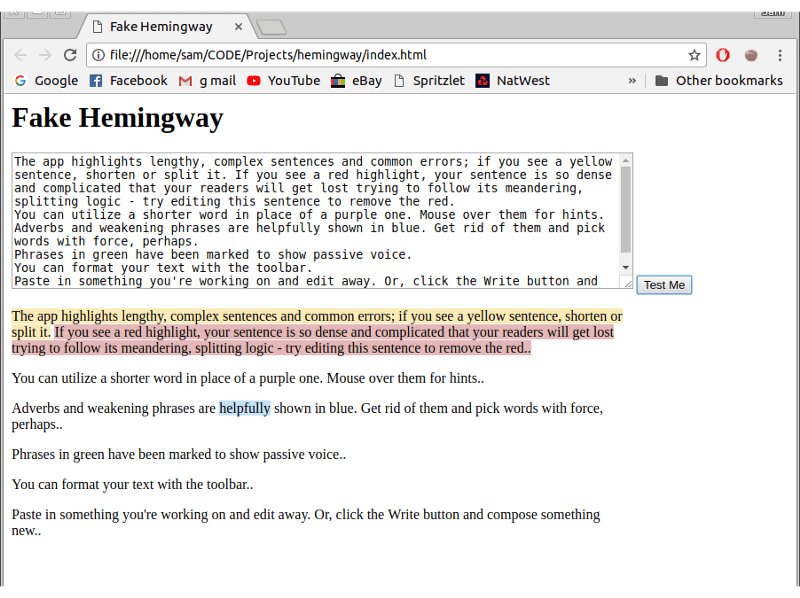 Now I had a result that worked with adverbs and highlighting individual words. I then implemented a very similar method for complex and qualifying words. That was when I realised that I was no longer just looking for individual words, I was looking for phrases. I had to change my approach from checking if each word was in the list to seeing if the sentence contained each of the phrases.

To do this I used the .indexOf() function on the sentences. If there was an index of the word or phrase, I inserted an opening span tag at that index and then the closing span tag after the key length.

With that working, it’s starting to look more and more like the Hemingway editor. 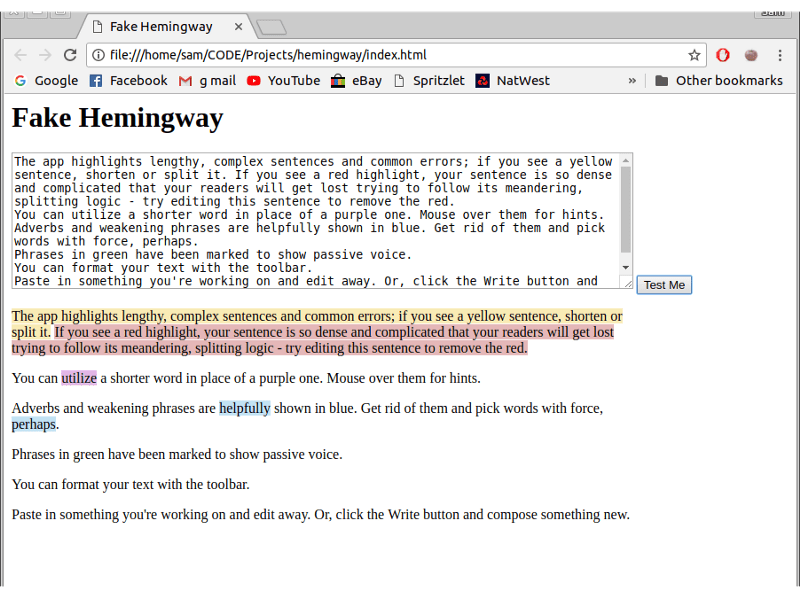 Getting complex phrases and qualifiers workingThe last piece of the highlighting puzzle to implement was the passive voice. Hemingway used a 30 line function to find all of the passive phrases. I chose to use most of the logic that Hemingway implemented, but order the process differently. They looked to find any words that were in a list (is, are, was, were, be, been, being) and then checked whether the next word ended in ‘ed’.
I looped though each of the words in a sentence and checked if they ended in ‘ed’. For every ‘ed’ word I found, I checked whether the previous word was in the list of pre-words. This seemed much simpler, but may be less performant.
With that working I had an app that highlighted everything I wanted. This is my MVP. 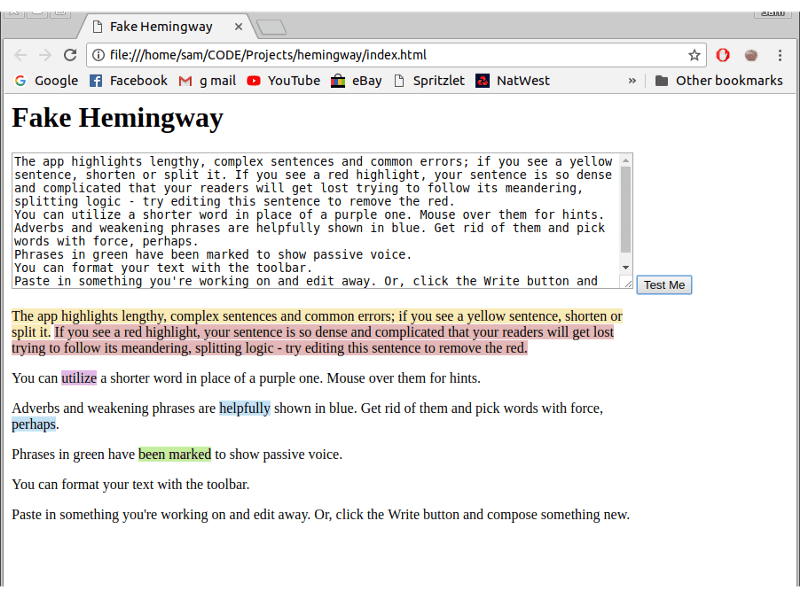 Then I hit a problem

As I was writing this post I realised that there were two huge bugs in my code.

These will only ever find the first instance of the key or match. Here is an example of the results this code will produce. 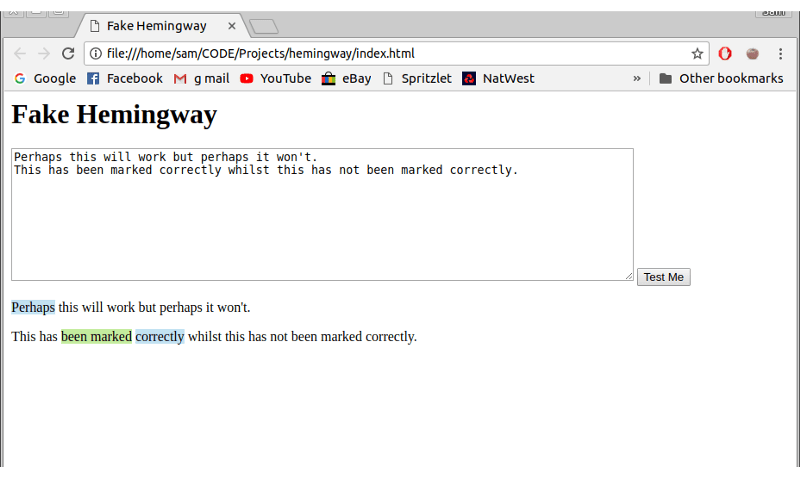 Code with bugs in‘Perhaps’ and ‘been marked’ should have been highlighted twice each but they aren’t.
To fix the bug in getQualifier and getComplex, I decided to use recursion. I created a findAndSpan function which uses .indexOf() to find the first instance of the word or phrase. It splits the sentence into 3 parts: before the phrase, the phrase, after the phrase. The recursion works by passing the ‘after the phrase’ string back into the function. This will continue until there are no more instances of the phrase, where the string will just be passed back.

Something very similar had to be done for the passive voice. The recursion was in an almost identical pattern, passing the leftover array items instead of the leftover string. The result of the recursion call was spread into an array that was then returned. Now the app can deal with repeated adverbs, qualifiers, complex phrases and passive voice uses. 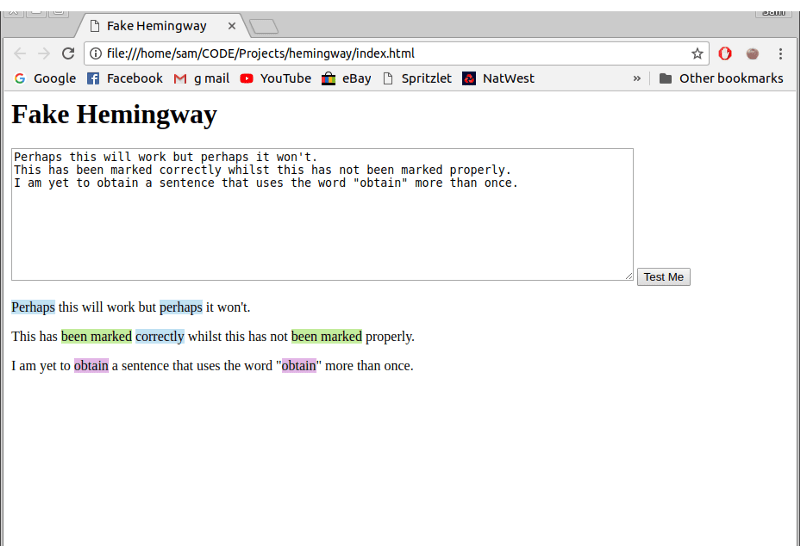 The last thing that I wanted to get working was the nice line of boxes informing you on how many adverbs or complex words you’d used.
To store the data I created an object with keys for each of the parameters I wanted to count. I started by having this variable as a global variable but knew I would have to change that later.
Now I had to populate the values. This was done by incrementing the value every time it was found.

The values needed to be reset every time the scan was run to make sure that values didn’t continuously increase.
With the values I needed, I had to get them rendering on the screen. I altered the structure of the html file so that the input box and output area were in a div on the left, leaving a right div for the counters. These counters are empty divs with an appropriate id and class as well as a ‘counter’ class.

With these divs, I used document.querySelector to set the inner html for each of the counters using the data that had been collected. With a little bit of styling of the ‘counter’ class, the web app was complete. Try it out here or look at my code here. 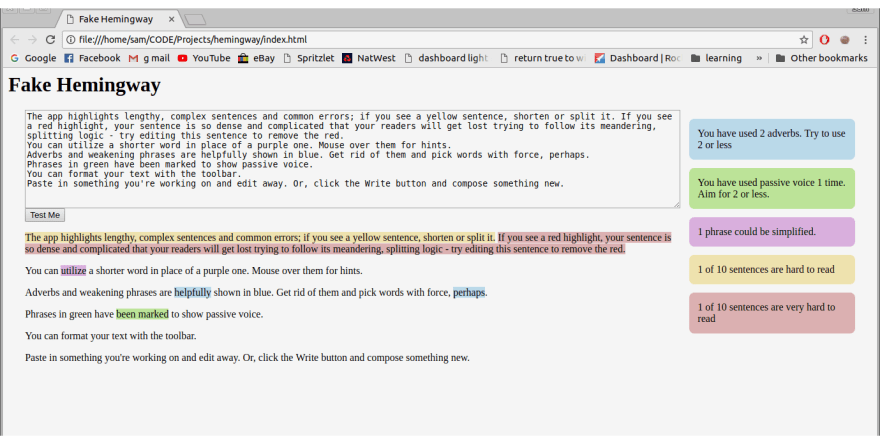 Movies app in 7 frameworks - which is fastest and why?

Is GitHub Copilot a Threat to Developers?

Once suspended, samwsoftware will not be able to comment or publish posts until their suspension is removed.

Once unsuspended, samwsoftware will be able to comment and publish posts again.

Once unpublished, all posts by samwsoftware will become hidden and only accessible to themselves.

If samwsoftware is not suspended, they can still re-publish their posts from their dashboard.

Once unpublished, this post will become invisible to the public and only accessible to Sam Williams.

Thanks for keeping DEV Community 👩‍💻👨‍💻 safe. Here is what you can do to flag samwsoftware:

Unflagging samwsoftware will restore default visibility to their posts.