Photo by ammiel jr on Unsplash

Have you ever deployed code from one environment to another only to have to spend time reconfiguring files, re-downloading libraries and redoing work because the operating system or general environment was slightly different from the development environment?

For developers who have even just being able to easily port different applications into new environments used to be surprisingly time consuming.

Not only that, applications could be limited to the OS they could run on and required much more resources.

Much of this has changed with the popularization of containers.

What is a Container and Containerization?

We want to discuss three technologies that you will likely run into as a developer. But first, in case you haven't used a container, we wanted to discuss some of the benefits of containers. For instance:

The Evolution Of Container Management From Docker To Helm 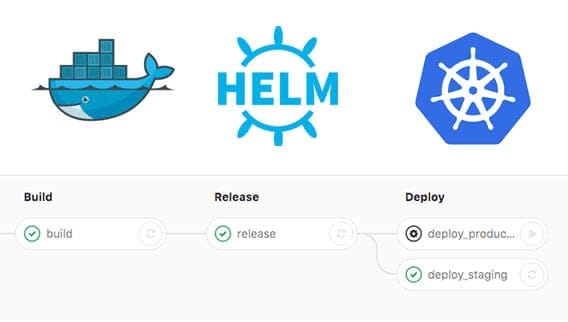 Although containers have provided many advantages, they also offered a host of new complexities. Especially as the concept of micro services became more prominent.

The need to not only create containers but better manage them became important. Below we will discuss 3 of the currently popular container and container management technologies that are being used.

You can't talk about containers without bringing up Docker.

Now many people might assume that Docker was the first container technology but that's not the case. The Linux academy has a great little bit of history on containers if you would like to learn more.

Now on to Docker.

Docker is an open-source project based on Linux containers. This container engine is developed on Dotcloud. Docker allows developers the ability to focus more on writing code without having to worry about the system that application will be running on.

Docker has a client server-architecture. This means that the Docker server is responsible for all container related actions. This server receives commands via Docker client using REST API's or CLI.

There are further nuances worth looking into. We would recommend reading Stackify's Docker Image vs container as it covers some of these very well.

Docker Image vs Container: Everything You Need to Know

Initially developed by Google, Kubernetes is an open-source system used for managing containerized applications in different environments. The main aim of this project is to offer better ways for managing services or components of an application across varied infrastructures. The Kubernetes platform allows you to define how your application should run or interact with the environment. As a user, you can scale your services and perform updates conveniently.

Kubernetes system is built in form of layers --- with each layer abstracting complexity found in lower levels. To begin with, the base layer brings virtual and physical machines into a cluster via shared network. Here, one of the server functions as master server and acts as gateway to expose an API for the clients and users.

From here there are other machines that act as nodes that get instructions from the master for how to mange the different workloads. Each node needs to have some form of container software running on it in order to ensure that it can properly follow the instructions provided from the master node. To get a really good understanding on this topic Digital Ocean further elaborates on the topic here. You can also take a free course from Google Cloud on Coursera.

Helm, itself, is an application package manager which can be used to run atop Kubernetes. This program allows you to describe application structure via helm-charts as it can be managed through simple commands. Helms is a drastic shift as it has redefined how server-side applications are managed, stored, or even defined. This manager simplifies mass adoption of micro services so you can use several mini services instead of monolithic application. Moreover, you can compose new applications out of existing loosely coupled micro services.

This tool streamlines management and installment of Kubernetes applications by rendering templates and communicating with the Kubernetes API. This manager can be easily stored on disk and fetched via chart repositories such as RedHat packages and Debian.

How does it Work?

Helm groups logical components of an application into a "chart" so you can deploy and maintain them conveniently over extended time period. Each time a chart is deployed to cluster, a server side component of Helm creates its release. This release tracks application deployment over time. With Helm, you can deploy almost anything virtually --- ranging from Redis cache to complex web apps.

Containerization is not a new concept and Docker is not the only technology designed to allow developers to easily configure their containers. However, as a developer, being able to understand the benefits and know how to use containers has made a big impact as they have helped simplify deployment as well as maintenance of code.

Let me know your thoughts below on.

How Algorithms Can Become Unethical and Biased

Learning Data Science: Our Favorite Resources Free Or Not

Things I Wished I Did Before Applying For Tech Jobs