Before we talk about hoisting, I think it is important to understand how the JavaScript engine looks at the code, interprets, and runs it. Once we understand this, hoisting becomes straightforward to explain.

JavaScript engine breaks up the code into smaller segments to manage the complexity of interpreting and running it. If I have to explain this easier, think about a scenario where you attempt to write a web application. Your application typically would comprise of modules, functions, variable declarations, etc. Essentially, you have broken down the application into logical pieces in order to understand, maintain, and debug it.

Just like how modules, functions, etc. allow you to manage program complexity, Execution Context is the JavaScript engine's way to manage the complexity of interpreting the code. Hope makes things a little clearer.

The first execution context that gets created when the JavaScript engine runs your code is called the “Global Execution Context”. Initially, this Execution Context will consist of two things - a global object and a variable called 'this'. 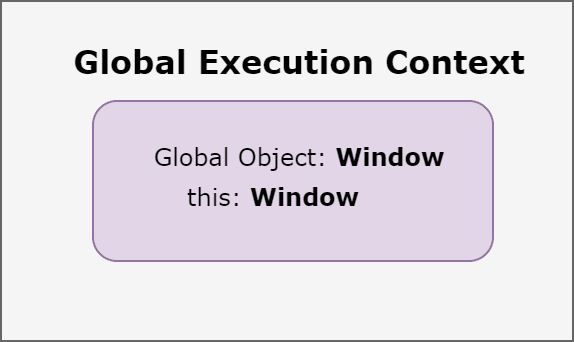 The above image represents the global execution in the most basic form. The 'this' keyword references the global object which is the 'window' object.

The below diagram depicts how the Global Execution Context looks during the creation phase. 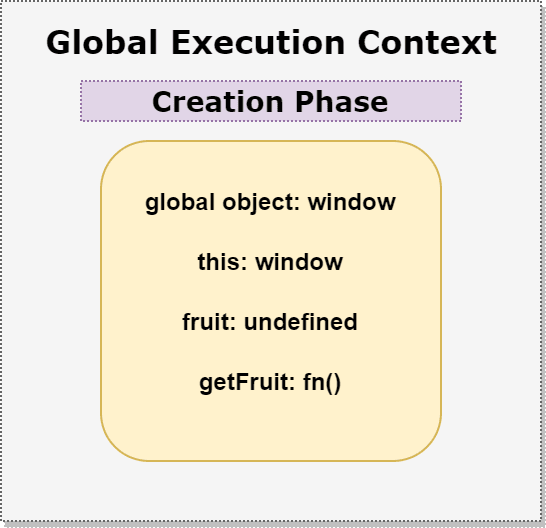 In the Global Creation phase, the JavaScript engine will:

The below diagram depicts how the Global Execution Context looks during the execution phase. 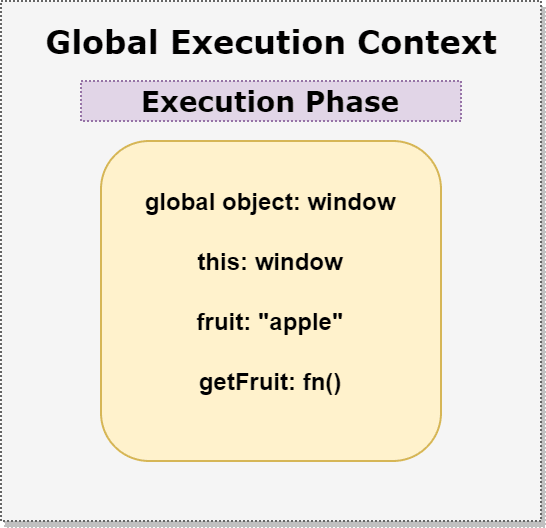 In the Global Execution Phase, the JavaScript engine will:

Now that we've understood the creation & execution phases, let us take another example and look at the output on the console.

The process of assigning variable declarations a default value of 'undefined' during the creation phase is called Hoisting.

The thing that’s confusing about “hoisting” is that nothing is actually “hoisted” or moved around. A lot of other explanations out there talk about how the code variables and functions are moved up the stack before execution without clearly talking about the creation and execution phases in the execution context.

A quick example of the below code will make sense after understanding hoisting.

Ideally, I would have expected the JavaScript engine to throw an error for using a variable before it has been declared, but thanks to ES6, this problem has been addressed with let & const. You can learn more about let & const over here.

What is not Hoisted?

We say that the variable declarations using let & const are not hoisted. In addition, the following are also not hoisted by the JavaScript engine:

Hoisting is nothing but the process of assigning variable declarations a default value of 'undefined' during the creation phase.

I would suggest that now that you immediately jump to my article on Closures since it's a continuation of the concepts described in this article. You can read it over here.

I hope you enjoyed this article. Do let me know your feedback and do not share it with your friends.