What are ligatures anyway?

Well then, you probably lack ligatures and you don't even know it! Ligatures is a font feature, that allows you to display multiple consecutive characters as one custom glyph!
If you've ever used Microsoft Word, it's substitution rules are very close to what ligatures are; with a difference, that Word really replaces the text with a substitution so original text is gone. In contrast, ligatures look like one character only when:

If you don't have one of these your code will look as usual; without any improvements.

What can it do for me?

Ligatures generally improve readability by making special character combinations distict and as well, making your code shorter by reducing the width of your code by displaying one shorter glyph instead of 2 or sometimes 3 regular width ones. 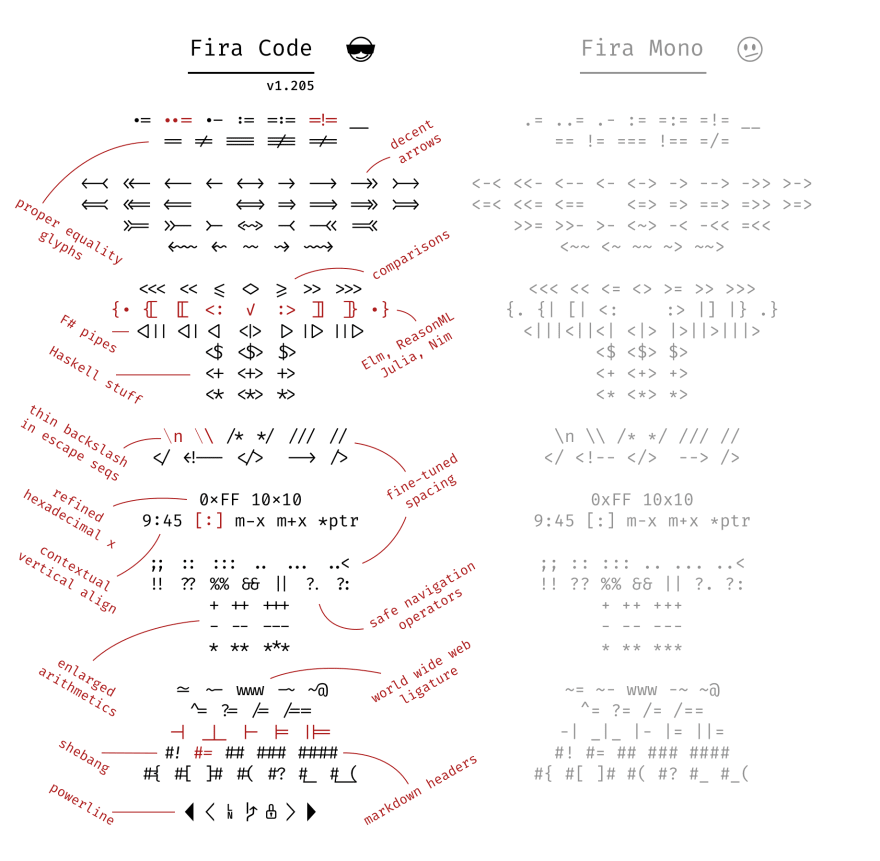 The funny thing is that within an editor a ligature acts as a single glyph so you can cop and paste it as a single character. In the underlying file it will, however, take space as multiple characters depending on ligature code.

So let's have a look at some sample code with ligatures:

Where can I get it?

There are multiple fonts that support ligatures.

My favorite free one is Fira Code.

There are other alternatives as:

But hey, you mentioned editor support! And you're right, ligatures do not work everywhere! So here's some overview.
Working in:

For complete support have a look at the list of working and non-working editors and as well as terminals!

Once suspended, slavius will not be able to comment or publish posts until their suspension is removed.

Once unsuspended, slavius will be able to comment and publish posts again.

Once unpublished, all posts by slavius will become hidden and only accessible to themselves.

If slavius is not suspended, they can still re-publish their posts from their dashboard.

Once unpublished, this post will become invisible to the public and only accessible to Slavius.

Thanks for keeping DEV Community 👩‍💻👨‍💻 safe. Here is what you can do to flag slavius:

Unflagging slavius will restore default visibility to their posts.