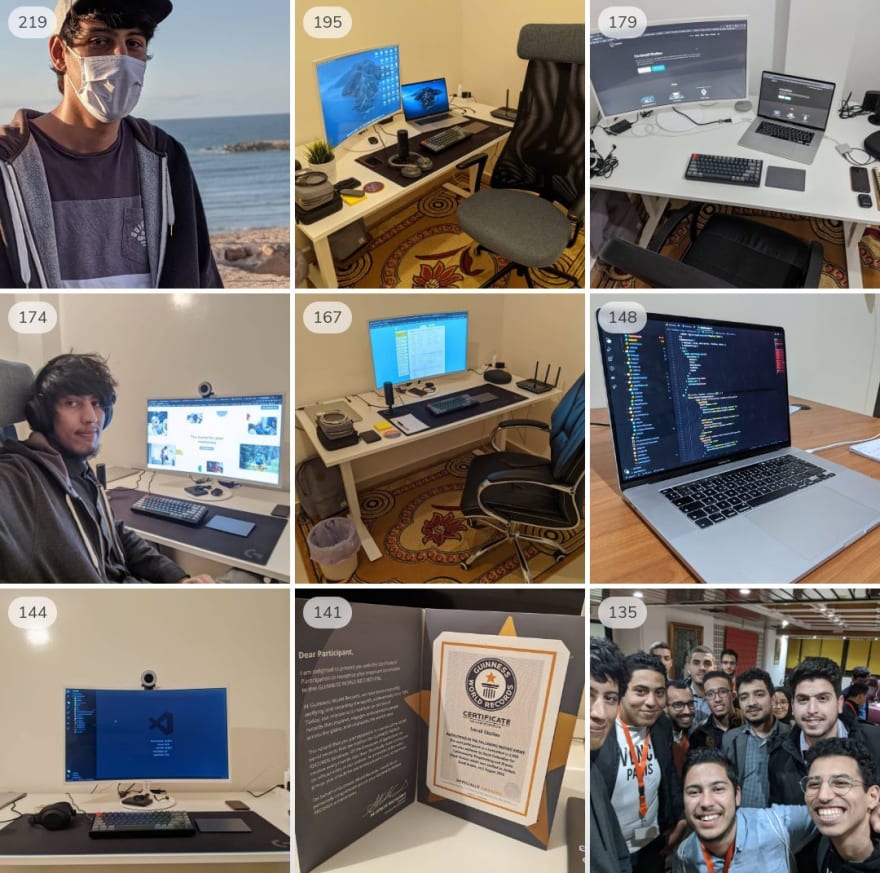 Though, this doesn’t mean I won’t be writing this one as I’m traveling back to visit my parents & get to walk a bit as I have been spending most of my time sitting on my desk.

So as usual, I’ll cover things that I have managed to learn, create & earn but I’ve decided to add a new category this year of things I shared as well.

This year started for me in late December when I was working a normal well paying job in a city known as Casablanca here in Morocco, though the workload wasn’t heavy, my skills weren’t been used the right way and as a result I wasn’t learning anything new on that job except few soft skills like mentoring new members, talking face to face with clients & I got to know few stuff related to business.

So I decided to accept an offer as a remote JAM Stack developer for a NYC startup as a part time job from which I learned a lot actually, though I understood the JAM stack well but I was heavily using Gatsby js rather than alternatives which weren’t that many nor as good as Gatsby when it comes to statically generate pages at that time, so I had to pick up & learn Next js the canary version at that time which added support to SSG & provided a new API for SSR as well, along with ISR.

My task was to build a statically generated Ecommerce website with i18n and multi currency support and does include the checkout step as well while the content is managed from a headless CMS.

Though there were some obstacles & performance issues with the GraphQL API I was using to fetch data & other security flaws I can elaborate more on, I managed to get it done in March which was open sourced, it was a good experience nevertheless as I got to work with good developers from all the parts of the world & I learned a lot from them & from the Next js core team which were really helpful & didn’t get bothered with my questions on both Next & Vercel.

I was also handling some client work to the point that I started outsourcing the work to fellow developers and designers I know and trust.

That was the moment I come up with the idea of building Ontwik which is a platform that connects developers directly with founders anywhere in the world without taking a % cut from the developers hourly rates but by charging the founder a small fee to get the contact details of the developers they decided to hire.

The small fee covers the work we do to filter good developers based on our previous work experience with them and a personal & technical interview which doesn’t include leetcode along with the servers cost and our design and engineering work.

And this is why I couldn’t publish any articles thus far. But I did give more talks this year than the previous one & one of the best ones was done remotely for the first edition of an amazing conference, though it was in my locale language, I would recommend checking out the slides. as they are in English.

Early in March, the startup decided to invite me to NYC to meet the whole team including investors & the board as I got an offer to work for them full time, as I passed through the airport checking, I checked my phone to notice that everything was canceled & I was asked not to come though I wasn’t able to retrieve my luggages nor cancel my flight. As a result I had to spend 1 night in a hotel nearby the airport & come back the next day. I’m grateful that everything was covered by the startup.

The Moroccan company got impacted by the pandemic as more clients weren’t used to remote work hence we (employees) were asked to let go of a specific percentage of our salary which was fine with me as it will be paid back later on, as I was in my parents house I decided to let go of 80% but in a condition to raise the precentage for other employees who are living independently and have a family to take care of, not sure if the CEO did as I requested but I trust his words.

A month later, we were asked again to let go of half of our salary but this time it won’t be paid back and any new employee shall be laid off until the company gets more work on the table, so I decided to mark myself as open for the market.

I got a numerous amount of offers which I’m grateful and thankful for, along with the support from anyone who reached out with an offer, help or a recommendation. I passed few interviews and decided to go with a Moroccan company based in Rabat by a recommendation from a friend of mine who runs a recruiting company. Though I decided to quit after being summoned to the office later in November.

Throughout 2020 I got to meet Jeffrey who’s my co-founder of Ontwik and has been doing amazing work powering up the micro services of Ontwik and I registered Smakosh as an LLC in the US as well which made it easier for me to work with amazing founders in the states.

Here’s a summary of things I learned, created, earned and shared.

Data about my blog during 2020

Will keep editing this article until January ends I usually do.

What would you do if you had a year off between jobs?