For a couple of days, I was looking for a simple terminal-based text editor for taking simple code notes or basic code fixing kinds of stuff.

As an aspiring developer, I really like the concept of coding without touching the mouse.

So I downloaded the king of CLI text editors, Vim.

Yeah, you're right. I stuck inside vim and couldn't even quit from there.

Then, I started watching a bunch of tutorials and started reading vim's documentation.

This tutorial from Ben Awad helped me to get started.

But then I realized, I have to learn a lot of things only to operate vim and it's a pretty lengthy process.

At that time, I really needed a very simple text editor for doing basic stuff.

So, I had to come back to 'nano' & I was not happy enough to write codes by using 'nano'.

It's not as advanced as vim but definitely a lot better than nano.

Some basic key points of Micro:

The best thing for me is colour schemes & screen split support.

Here are some of the basic things for you to get started with Micro. You'll get every single thing on Micro's documentation page but still, these are the first things you can do with micro.

Open your terminal and give apt install curl <- this command.

Then give sudo mv micro /usr/bin this command to add micro in the environment variables.

You can easily interact with the editor by using built-in commands.

Type ctrl+e to open the command area at the bottom.

Know everything about micro command from here.

Micro has different built-in colour schemes for the editor.

My favourite one is "gotham" - demo. 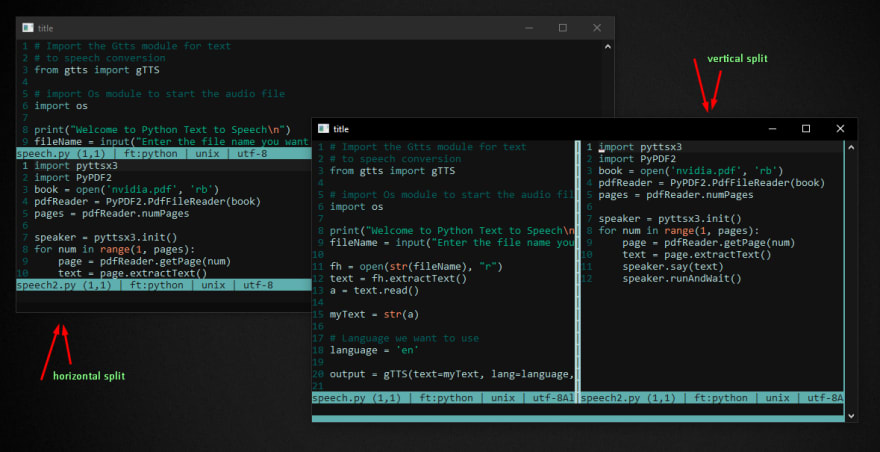 You can split your screen and code into multiple files at the same time.

Learn more about Micro from the official documentation & GitHub repo.

Once suspended, souviktests will not be able to comment or publish posts until their suspension is removed.

Once unsuspended, souviktests will be able to comment and publish posts again.

Once unpublished, all posts by souviktests will become hidden and only accessible to themselves.

If souviktests is not suspended, they can still re-publish their posts from their dashboard.

Once unpublished, this post will become invisible to the public and only accessible to Souvik Paul.

Thanks for keeping DEV Community 👩‍💻👨‍💻 safe. Here is what you can do to flag souviktests:

Unflagging souviktests will restore default visibility to their posts.