JavaScript is one of the most loved and the most hated programming language of the world. Yet, the most versatile and important too! JavaScript is ever-changing and there are thousands of concepts to study and understand. However, there are a few which can be considered the most basic and important concepts. I'll be talking about three of them in this article -

In JavaScript, the availability of variables is referred to as scope. Hear me out - The scope of a program in JavaScript is the set of variables that are available for use within the code. That being said, any variable that is out of a particular scope, can't be used within that scope.

There are a few advantages of Scope in JavaScript -

JavaScript beginners often confuse Context and Scope as same. But they aren't! Any function in a JS code has both, Context and Scope. Context is the state of the current execution of code. It is accessed through the 'this' pointer. While scope refers to the visibility and usage of variables.

Variables in JavaScript are declared using the var, let, or const keywords.

The difference between these three comes down to two factors:

An assignment is an act of pointing that variable in memory, as all the variables act as pointers.
Mutability is whether or not a variable can be reassigned once it has initially been assigned something.

The block of code where a variable or argument is declared determines its scope.
When using let or const, an argument’s or a variable’s scope is always the actual block in which it is declared. 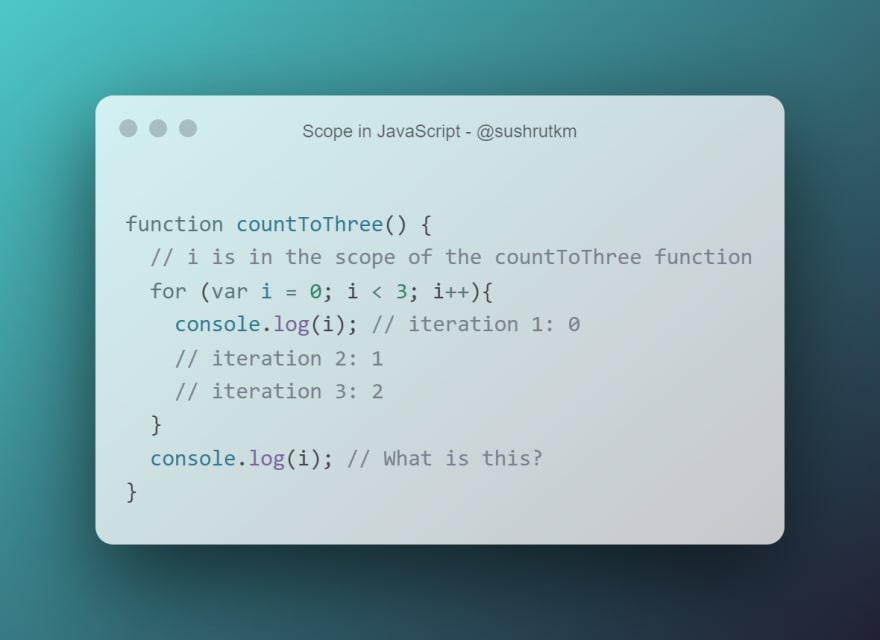 What would be the output of the last console.log?

What do you think would be output if I replace 'var' with 'let'.
It gives an error. Why?
Because calling var in an 'if' or 'loop' will assign the variable to the scope of the nearest enclosing function. 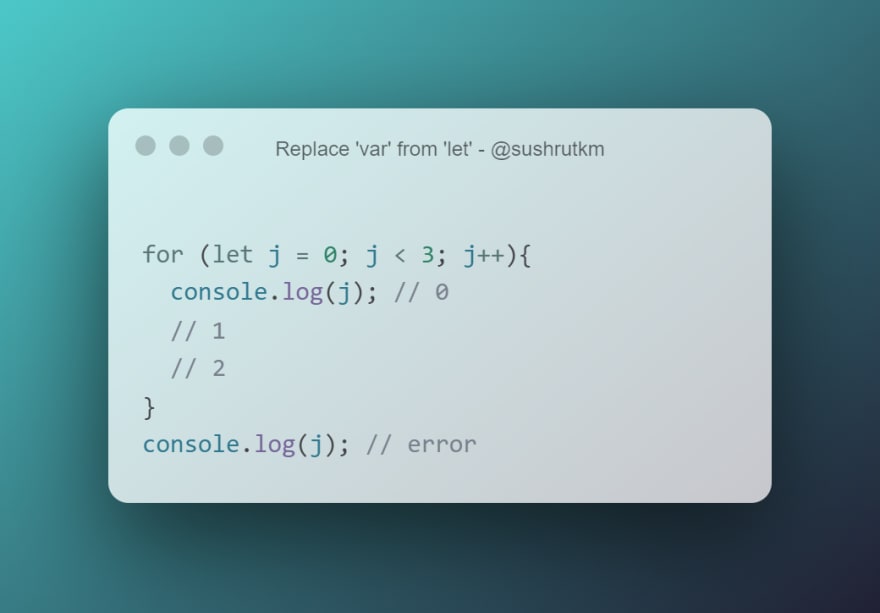 While for let, scope is always the actual block in which it is declared.

Context and 'this' keyword

Sometimes I feel like JavaScript is a magic. But then, who's the magician? It's the JavaScript engine.

An engine that interprets JavaScript code is called JavaScript Runtime. It can be part of a browser or other runtime environment like a server.
JavaScript engines are powerful in terms of optimizing the execution & following the ECMAScript standard.

What is the ECMA standard?

The defining feature is: It is Single-Threaded. Suppose a Stack. The work currently in progress in the stack owns the thread.
The rest of the works are lined up in a Queue waiting for their chance. Why? Because Single Threaded.
When the stack gets empty, an event loop takes work from the Queue and places it in the Stack.

It is, of course, in layman terms but shows the basic model of JavaScript Runtime Engine.
Just to tell you how the engine works.

As stated, since JavaScript is built using the ECMAScript standard, it keeps changing.
Every year an update is released with new features. Syntactical or Semantical.
Changes to obtain clearer syntax are often referred to as - Syntactic Sugar.

Sushrut Mishra
Community Manager at Fountane. I'm a Developer and Technical Writer with 2+ years of experience. I have worked on 100+ blogs with 5+ clients including Fountane, LambdaTest, DevBytesApp, Flair, etc..
How I Built a Side-Income Stream For Myself as a Developer
#beginners #career #productivity
Gear Up For Web3 With These Terminologies
#web3 #blockchain #beginners
The most basic explanation of Ethereum(ETH)
#blockchain #web3 #beginners

Once suspended, sushrutkm will not be able to comment or publish posts until their suspension is removed.

Once unsuspended, sushrutkm will be able to comment and publish posts again.

Once unpublished, all posts by sushrutkm will become hidden and only accessible to themselves.

If sushrutkm is not suspended, they can still re-publish their posts from their dashboard.

Once unpublished, this post will become invisible to the public and only accessible to Sushrut Mishra.

Thanks for keeping DEV Community 👩‍💻👨‍💻 safe. Here is what you can do to flag sushrutkm:

Unflagging sushrutkm will restore default visibility to their posts.