Hello everyone, I'm back from my hibernation, I will continue to post the series about data Structure and algorithms, It's also part of my journey towards learning Data structures and algorithms ... once it for all, As in my engineering yrs, I was struggling to write the simple stack code. Looking back .. I have come a long way But now as a full-time developer. I once again decided to learn ds and algorithms to finish it this time.

Being consistent is the key to success...

Now Let's get started with part 6 in the series of blogs about data structures and algorithms in JavaScript, In this blog, I will cover Doubly linked list.

A Doubly Linked List contains an extra pointer, typically called the previous pointer, together with next pointer and data which are there in the singly linked list. - geeksforgeeks.org

DoubleLinkedList provides a way of iterating it from start to end or vice versa. We can go forward using next pointer or backward using previous pointer, for this behavior, we will keep track of the previous element in each node, therefore, we will define a DoublyNode Which will extend the Node class, element and next properties will be initialized by parent constructor and a previous property to keep track of the previous element.

All methods implementation will be similar to the single linked list. In addition to the next pointer, we also have the previous pointer.

When Pushing an element to a doubly-linked list, we have two scenarios:

First, We will create a DoublyNode passing element as its value if the head is undefined then assign head pointer to the node ({1}) and also tail ({2}). Since the end node points to the tail pointer.

To insert an element at a given the position; We validate the index, ie. index the must be greater than zero and less than and equal to count, there are three scenarios, 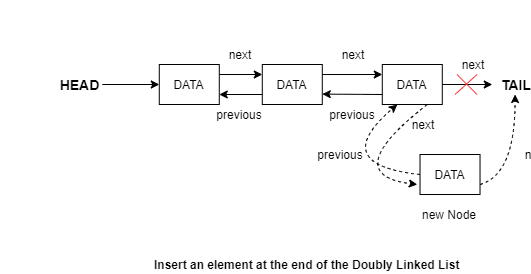 Remove an element at the specified index, we first check if the linked list is empty else return undefined ({1}), After that we valid the index's out of bound error, by check is the index, greater than zero and less than count.there are three scenarios,

Get the full source code here

So, stay tuned for the next blog, in which I will cover another DS Circular Linked List.

Once suspended, swarup260 will not be able to comment or publish posts until their suspension is removed.

Once unsuspended, swarup260 will be able to comment and publish posts again.

Once unpublished, all posts by swarup260 will become hidden and only accessible to themselves.

If swarup260 is not suspended, they can still re-publish their posts from their dashboard.

Once unpublished, this post will become invisible to the public and only accessible to Swarup Das.

Thanks for keeping DEV Community 👩‍💻👨‍💻 safe. Here is what you can do to flag swarup260:

Unflagging swarup260 will restore default visibility to their posts.