We want to take a set of objects and put them into groups.

D, The distance algorithm, can be any similarity metric you choose depending on your domain knowledge.

This helps you build a Hierarchical Agglomerative Cluster Structure. By cutting off the tree at k levels from the top you can get a predetermined number of clusters, which is handy.

Instead of the closest 2 points, you can also modify this algorithm to use the furthest 2 points or the average (mean, median) point of each cluster.

SLC is deterministic, and also generates a minimum spanning tree. The running time is O(n^3). However it generates some nonintuitive clusters because of the "closest points" rule. So we need something better.

Centers do not have to be any of the points, its just the "center" of the cluster.

K-Means can be viewed as an optimization problem, in that we are always trying to get better and better answers with each round. To use optimization terminology, we are saying that we can score each set of configurations (the centers), and we try to move from neighborhood to neighborhood trying to improve.

If we assume we know the "true" partitions, P(x), we can sum the squared errors between center of P(x) - x for an Error score to minimize. "Neighborhood" is a bit less intuitive - its the set of possible moves at the end of a round, basically, you can either move the partition, or you can move the centers.

You can prove that K-means Clustering:

If you recall the Randomized Optimization chapter, this sounds a lot like hill-climbing, where you pick and move to neighbors based on their score. This also means it can get stuck in local optima (bad clustering based on the random starting point), so the only fix is random restarts.

There's also an edge case where if a point is somehow equidistant between two perfectly converged clusters, it would nondeterministically be either part of one or the other. To deal with that we'll use an algorithm where sharing is allowed...

The main trick here is to do like we did with MIMIC and assume points come from a probability distribution. Try:

The task is to find a hypothesis h=<u1, u2,... uk> of "k means" that maximizes the probability of the data (aka Maximum Likelihood). The Max Likelihood mean of the gaussian is just the mean of the data, so there's nothing really new here. However you can use k Hidden Variables ([0,1] membership in Partition 1 to k) run the algorithm in a similar way to k-Means Clustering. Instead of always improving in the Error metric, you're improving in the probabilistic metric. Running the algorithm is a process of expectation maximization.

Although you can lean on domain knowledge to pick k, there can algorithms to help pick the "Elbow", the "best" point given a tradeoff between number of clusters vs explanatory power. 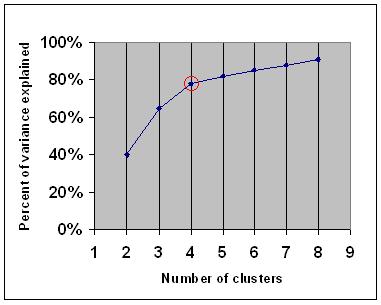 Many ways to do this exist, see the Wikipedia article for more.

Silhouette profiles can help visually inspect the appropriateness of clusters.

A better alternative may have emerged in Feb 2018: UMAP, and the benefits are worth considering. Here is the author explaining the idea:

There are three desirable properties of clustering algorithms:

SLC is consistent and but not Rich.
You can modify SLC's stopping point to make it richer, but you will lose scale invariance.

So on and so forth. This is a proven theorem, that these three properties are mutually contradictory.

Hopefully that was a good introduction to Clustering. I am planning more primers and would love your feedback and questions on:

How to save the entire user session using Python?