One day you got to work

All your buddies talk about this weird magical tech called "Docker"

You literally have no clue what the hell it is.

But you too scared to ask dumb questions.

There are 2 problems here:

Well, you need some sort of inner realization to fix the first one but the second is on me.

In this post, I will elegantly jumble 30 hours of research into one blog post. No need to worry, turns out it's a lot simpler than I thought.

Imagine this, you recently opened a coffee bean business, and as it turns out your beans are the best in the market. You got your shop setup, and start selling those beans. You get good sales, and eventually, you start receiving orders from different cities. You start to think about how to deliver those beans to your customers, then it hits you.

A year passes by and your beans become more and more popular. You get your first order from a different country, but this time trucks won't work. They take too long and the road is bumpy, which may hurt the quality of your beans. You think once again... Then it hits you.

You might think all is nice and dandy but when you have so many methods of transportation, you have to make sure that they all don't mess up, meaning that it's very hard to manage that your coffee beans won't be ruined in different environments. It's a huge expense and headache for your business.

Great now you got a new problem, so as always you start to think, think and do more thinking until one day the "AHAAAA" moment hits and you figure it out.

Put a bunch of bean bags in a shipping container. Something like this: 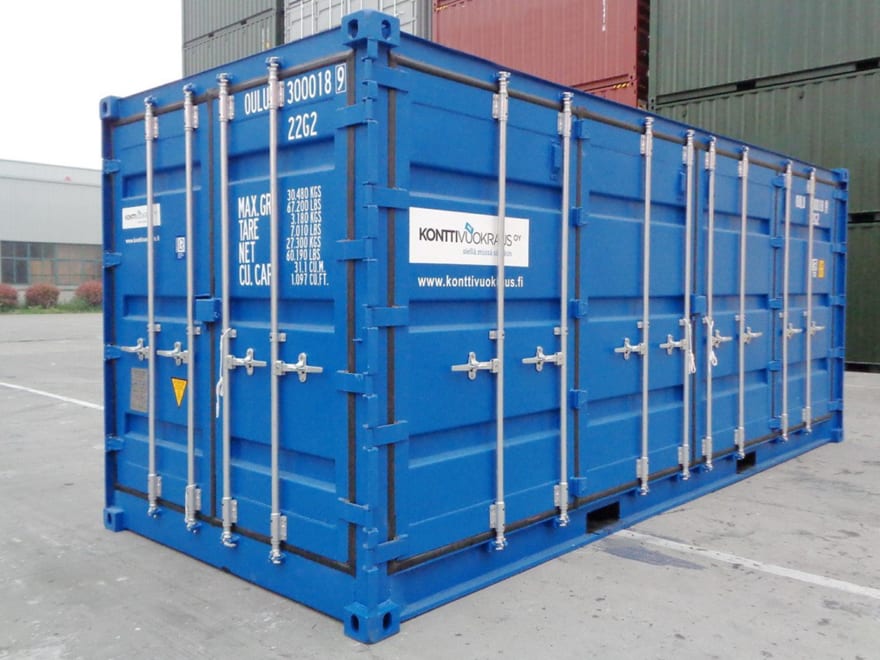 Using this method, you can simply store your coffee beans in a container that will guarantee it's safety no matter what, may it be a ship, plane, car, truck, doesn't matter — it will always be safe.

A little bit about history

The problem we just had with our coffee beans was a very common problem in the pre-60s. They worried about bad interactions between different types of cargo (e.g. if a shipment of anvils fell on a sack of bananas). Similarly, transitions between different modes of transport were painful. Up to half the time to ship something could be taken up as ships were unloaded and reloaded in ports, and in waiting for the same shipment to get reloaded onto trains, trucks, etc. Along the way, losses due to damage and theft were large. And, there was an X matrix between a multiplicity of different goods and a multiplicity of different transport mechanisms. 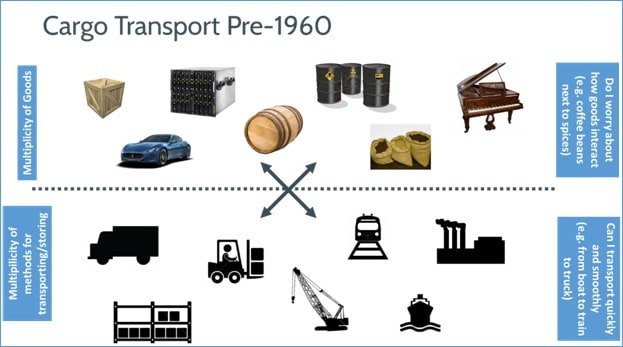 Fortunately, an answer was found in the form of a standard shipping container. Any type of goods, from pistachios to Porsches, can be packaged inside a standard shipping container. The container can then be sealed, and not re-opened until it reaches its final destination. In between, the containers can be loaded and unloaded, stacked, transported, and efficiently moved over long distances. The transfer from ship to gantry crane to train to truck can be automated, without requiring a modification of the container. This piece of technology revolutionized transportation and world trade. Today, 18 million standard containers carry 90% of world trade.

Coming Back To Tech

It can be said that in tech we had the same kind of problem because in the past the usual tech stack was very simple.

Deploying this didn't include going to hell and coming out of it. But as time progressed, our apps have progressively become a lot more complicated. Nowadays our apps are not a monolith, there may be a frontend and a separate backend. You might even have microservices with each service being on a separate server. Essentially what I'm saying is that:

Shipping code is so damn hard

There are a million things that can go wrong:

I could go on but for the sake of your time I will stop here.

In the context of our earlier problem with the coffee beans, can be translated to tech:

This problem is so popular both in tech and outside it that it has it's own special name:

The Matrix of Hell

In this example we have a huge product with many different components:

You have to make sure that they all work on different platforms, and are all compatible with each other. So every time you make a small change to the dependencies, you have to re-test everything to make sure that you didn't have any bad side effects.

The QA Engineer will have to test each block separately and make sure that they all work, as well as after any dependency change, he's gonna have to retest everything. As you may assume this comes with many problems that include:

So once again the council of software developers have come together, and wanted to find a solution with the slogan:

Then finally in 2001, a guy named Jacques Gélinas created the VServer project, which is the first version of the so-called Container.

Containers are essentially an entity that contains your application and all its necessary dependencies. 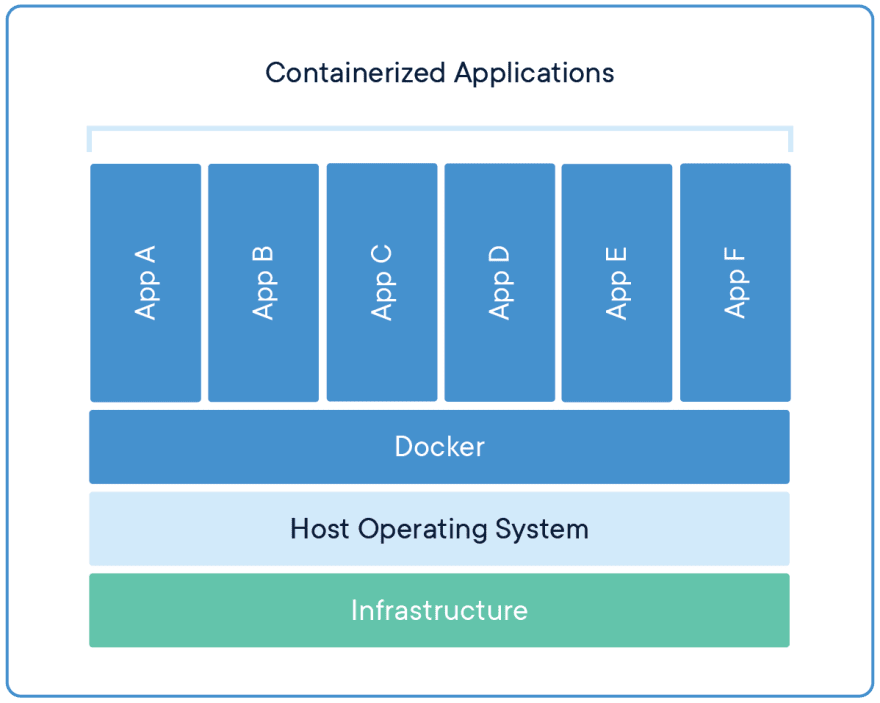 Containers are some very old technology already but where does docker come in?

Well, the thing is that containers are very hard to make and this is where docker comes in because what docker essentially is it's an abstraction that helps us to create and manage containers.

Basically, we have solved our problem (matrix of hell) by using containers. 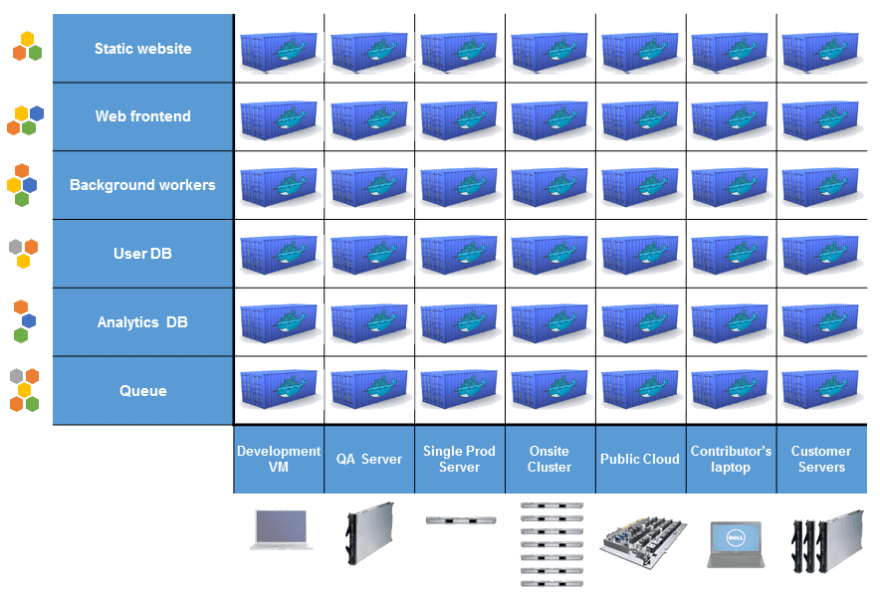 What can I put into containers?

And it might be possible that you want a different version of the environment based on the compatibility of your application.

As we have stated above docker is simply a tool that makes it easier for us to create and manage containers. But let's state some more interesting details.

Docker is a Dev-ops tool that automates the development, deployment, and running of applications inside isolated containers.

Docker was created by two guys called Solomon Hykes and Sebastien Pahl, it was actually an internal project in dotCloud.

It is fully written in Golang.

Nowadays docker comes with the Docker Platform which consists of multiple products:

Docker helps us in creating and managing containers in which helps us deploy our applications much faster, but there are some other use-cases in which docker can benefit us.

Why it works? (Separation of Concerns)

Humans are terrible at multi-tasking, and keeping a lot of information in their brain.

This should not happen.

The development team should only worry about the product.

The operations team should only worry about deployment and uptime.

Well this is all in the past now, developers put their applications on a container and the operations team simply takes the container, does not give a single shit about what's in their as long as it works.

Now both teams are happy.

Developers are doing only development work, they focus more on development which in turn will lead to a higher quality software, and the operations team will only worry about maintaining the container.

This is a prime example separation of concerns, and how it benefits us.

But before we move on about docker, we must first talk about operating systems.

A Little Bit About Operating Systems

Quick Disclaimer: I will mainly be talking about Linux operating systems. 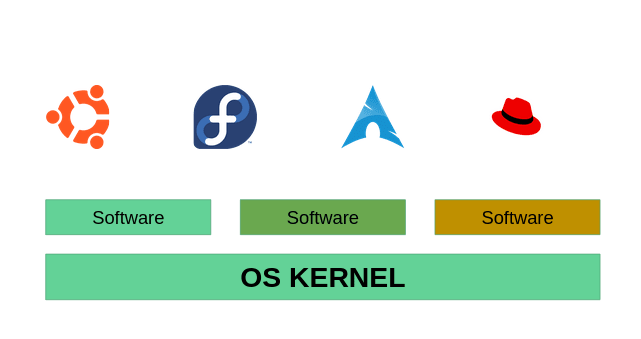 Operating systems such as Ubuntu, Fedora, Arch, and Redhat are essentially all the same. They all share the same OS Kernel (Linux Kernel), but what makes them unique is their different set of software. Ubuntu has some special UI or File System that Fedora may not have.

The key takeaways: (it will help in the next section)

But what about VM's? (Virtual Machines)

You might say "Why don't we simply use virtual machines instead of containers?"

This is a very valid question but the short answer is that it's not very practical to be using virtual machines.

How about we explore the differences between containers and virtual machines.

Containers are by far much smaller than virtual machines, the main reason why is that they share the operating system, while virtual machines have their own standalone OS.

Containers are much faster than virtual machines because there's no OS too boot.

I don't want you to think it's only one or the other, the majority of the time in big corporations virtual machines and containers are used together. 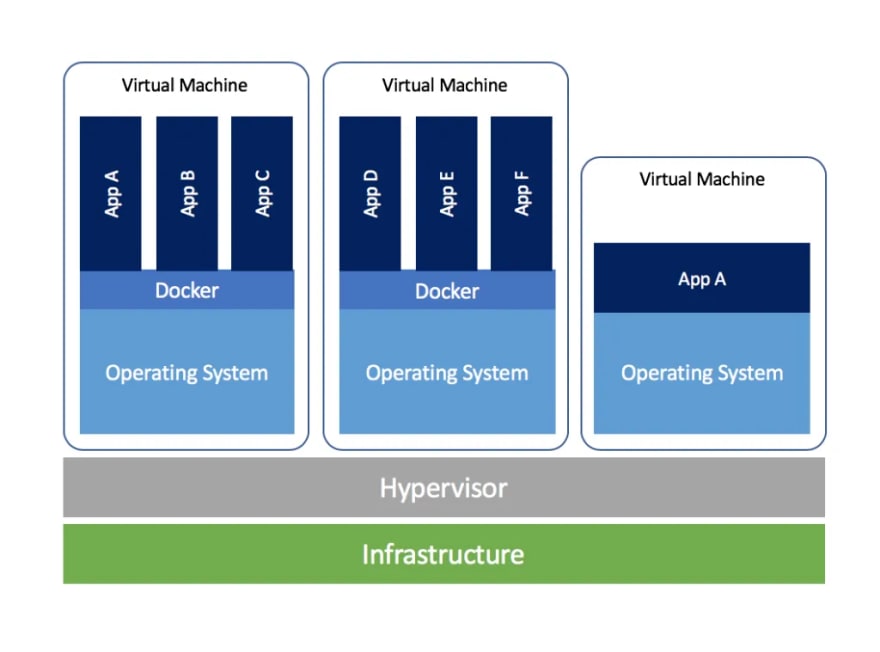 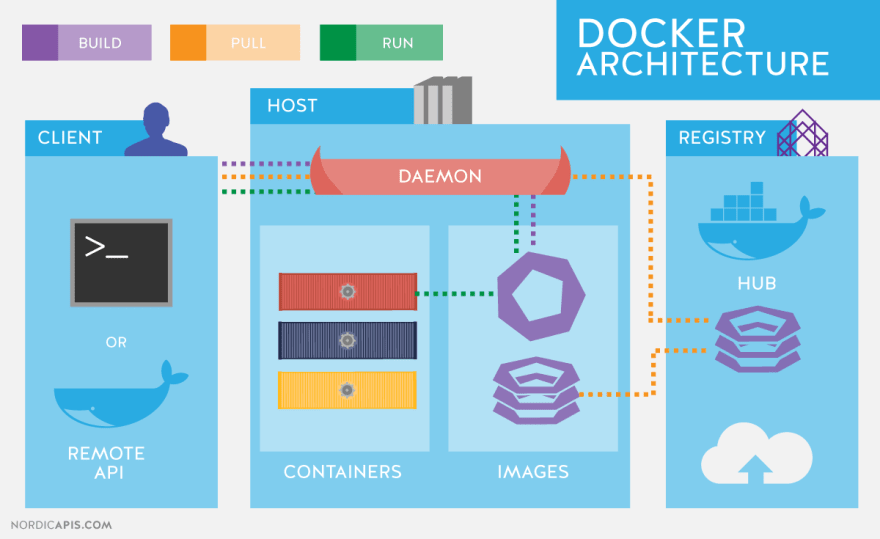 Let's break these down one by one.

The command-line tool allows the user to interact with the daemon. A command-line interface client for interacting with the Docker daemon. It greatly simplifies how you manage container instances and is one of the key reasons why developers love using Docker.

Docker host is actually a group of things:

Let's once again break these down:

The background service running on the host that manages building, running, and distributing Docker containers.

There are two types of networks available:

By default, you get three different networks on the installation of Docker – none, bridge, and host.

The none and host networks are part of the network stack in Docker.

The bridge network automatically creates a gateway and IP subnet and all containers that belong to this network can talk to each other via IP addressing. Basically what it means it allows multiple containers to talk to each other via a network. This network is not commonly used as it does not scale well and has constraints in terms of network usability and service discovery.

You can store data within the writable layer of a container but it requires a storage driver. Being non-persistent, it perishes whenever the container is not running. Moreover, it is not easy to transfer this data. In terms of persistent storage, Docker offers four options:

Docker registries are services that provide locations from where you can store and download images. In other words, a Docker registry contains Docker repositories that host one or more Docker Images. Public Registries include Docker Hub and Docker Cloud and private Registries can also be used.

In conclusion, today we have learned about docker, why is it important, and how it works on a high level. If you have any questions feel free to leave them in the comments section below.