PWA is becoming more and more usual on our phones. If it's so easy to deliver and maintain, why isn't it more widely used?

In this post I'll propose a conceptual "app store" free mobile OS and a very different monetisation model, in a vision which would free us from biased store content and turn the mobile back to the free web.

"I want to make something really clear: We support two platforms at Apple. Two.
The first one is HTML5, a fully open uncontrolled platform (...).
The second one is the App Store. (...)"
- Steve Jobs, 2010

I've discussed how iOS in particular has moved from being the web innovator in 2010 to becoming the internet explorer of the mobile era.

What if a phone had only the mobile web?

What if we designed a ROM which only runs mobile web & PWA?

What if this new phone came with crypto wallet powers in web payments?

"Firefox OS again?" Not exactly.
Firefox was bound by 3 concepts we disregard here from the start:

Note: In case you never heard of PWAs before - read about it here. 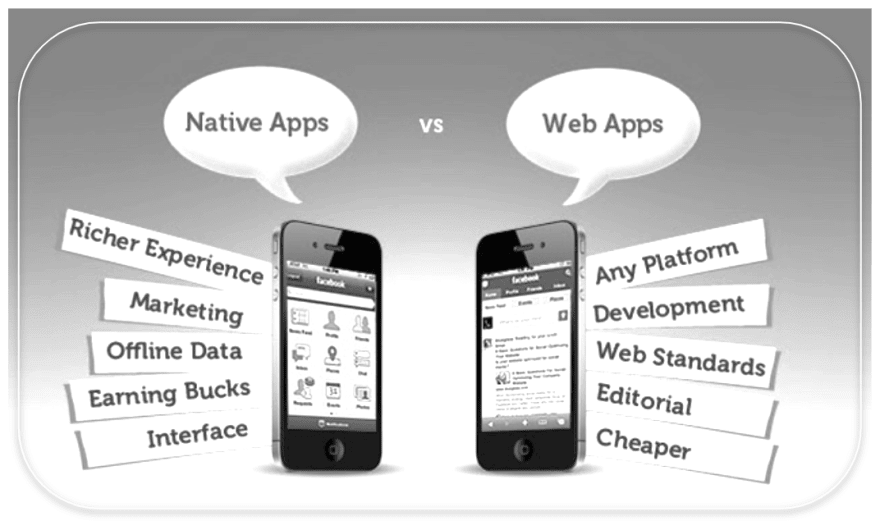 We can see from the above that most issues on mobile web today are bound to the phone OS/store, its marketing and biased strategies, more than the mobile web technology which is coming leaps and bounds since 2010.

The main reason for this is that you need to cater for the controls of the browser app itself such as address bar, settings, favourites, etc.
We still see the browser as a the app, and the web content as... just content.

The answer would be a web-only mobile OS UI.
By having the concept of “web browser” as the only client runtime, we can immerse the web experience into the mobile phone UI. Apps become just tabs, and “bookmarking” is no different from “installing”.

Let's take our modern phone to a "blank slate" and start off from a basic modern dashboard. Taking Android UI as a baseline, we could merge home+switch app buttons into a single button, and take the old switch app place and use it for context settings. 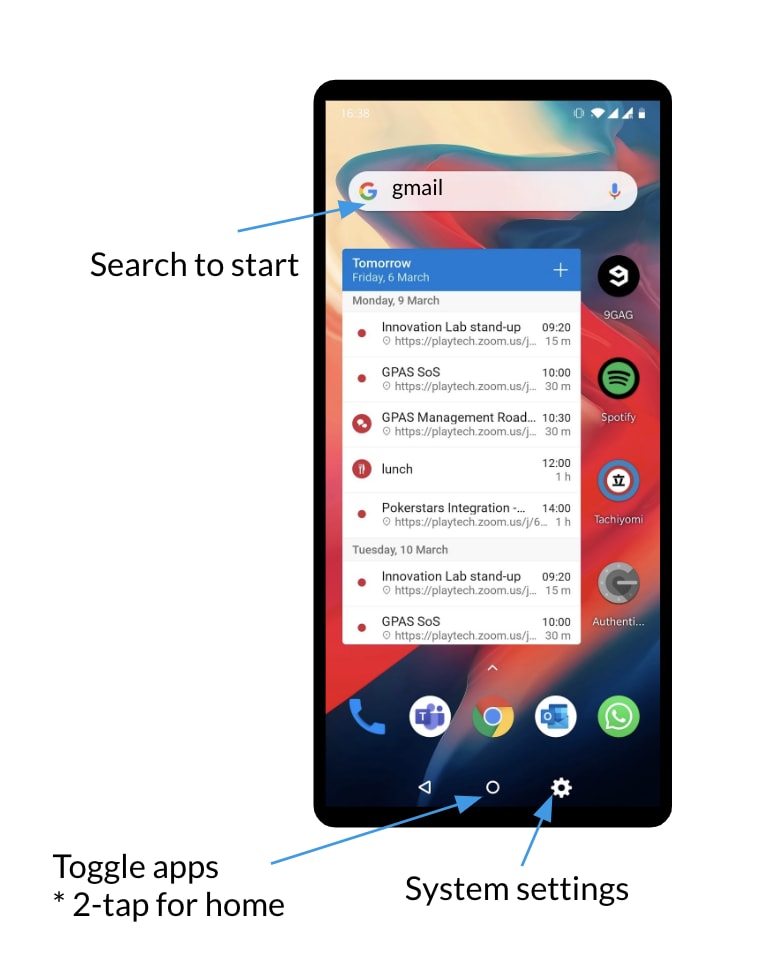 Then when we travel to a web page/app, say gmail, the web page would be an "app" in itself and always present fullscreen 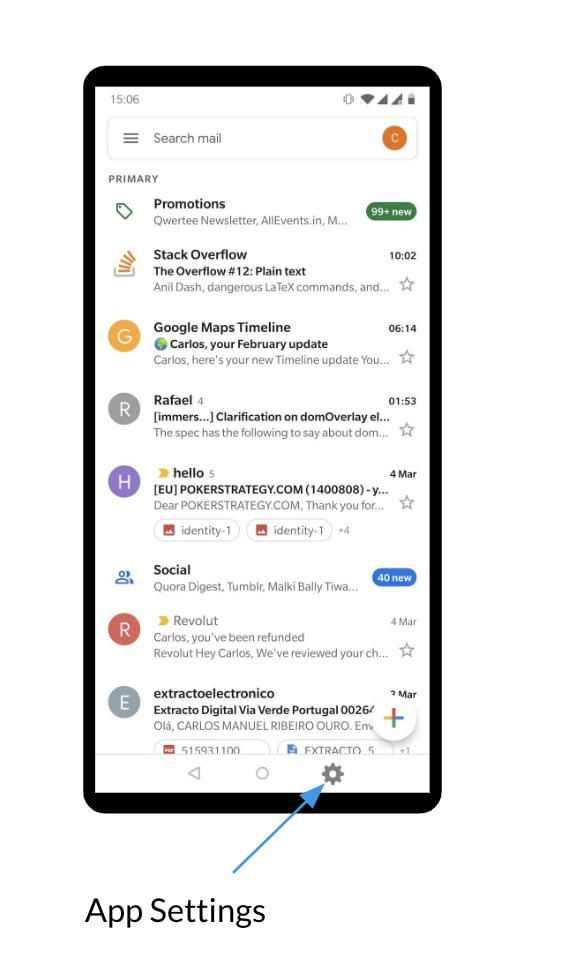 This seems natural!
It doesn't "feel" like mobile web anymore.

But what about browser controls?
Remember the context settings button we've added? 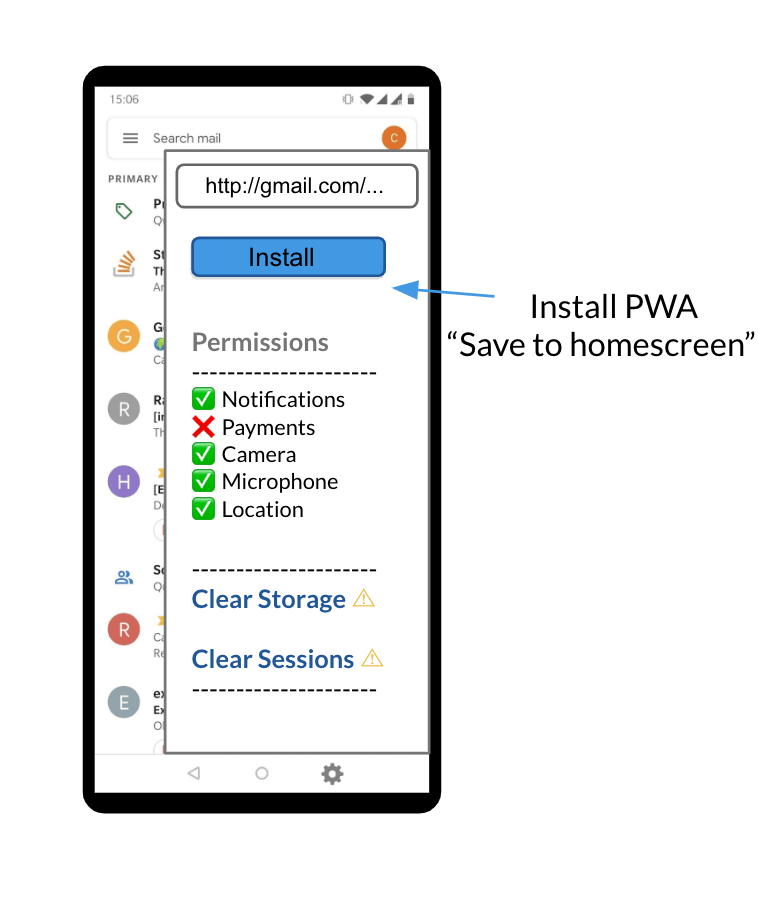 Ok - now its even easier to control security and permissions for any app that on a "native" apps phone!

Actually today they can.

There is already a suite of solutions for web apps in use today:
Storage API standards:

We just need to organise appropriate storage settings and limits for installed and non-installed apps, and enable user review/override when necessary.
Managing in-device storage also becomes much simpler than in other mobile operating systems today that need to account with multiple storage solutions for different app types.

The web already knows how to marketing

Ads and SEO have been around for a long time and they are the natural marketing strategies of the web.
It is the natural solution for developers which is provided out-of-the-box by the open web.

Having said this, the manufacturer could consider some kind of branded dashboard/portal where top compatible “apps” can be listed...

Payment Request API already exists today.
With some work in this field we could easily can turn our phone into a eWallet for web payments.

Phone manufacturers can bundle their own crypto providers to phone users and thus leverage of small micro-transaction fees out-of-the-box with the phone.
Also - using crypto would make payments processing much easier in the web apps themselves.

"But can the content quality ever really match up to native speeds?"

We know things have been evolving incredibly fast - we now have near-native speeds in web content today with WebAssembly, basic 3D graphics via WebGL, augmented reality capabilities via WebXR, threads via workers, and many, many other APIs.

Vulkan/WebGPU is expected to soon enable game developers to reach even closer to native-level graphics with thousands of 3D objects not degrading performance, much above the ~100 objects that we can do today with WebGL.

We don’t have the tools, frameworks and engines today that we do in native apps - but part of the problem is exactly because there has been no real need/business case for it. We just put up a native app instead.

But with broader PWA adoption and newer web APIs, developers will soon create such tools and there is no real technical limitation in the near future for any relevant discrepancy in web vs native experiences.

But would this actually work?

I've pitched the idea to a few people over the last 3 years, and mostly everyone discards it as meh.

So I've decided to post it here - maybe someone else will agree or build upon the idea :)

Once suspended, techtrouts will not be able to comment or publish posts until their suspension is removed.

Once unsuspended, techtrouts will be able to comment and publish posts again.

Once unpublished, all posts by techtrouts will become hidden and only accessible to themselves.

If techtrouts is not suspended, they can still re-publish their posts from their dashboard.

Once unpublished, this post will become invisible to the public and only accessible to Carlos Ouro.

Thanks for keeping DEV Community 👩‍💻👨‍💻 safe. Here is what you can do to flag techtrouts:

Unflagging techtrouts will restore default visibility to their posts.