In summary, yesterday, I was attacked by a github user that crafted a malicious github action to start a crypto-mining program inside an action run. He triggered it in my github actions thanks to a shitty pull request. 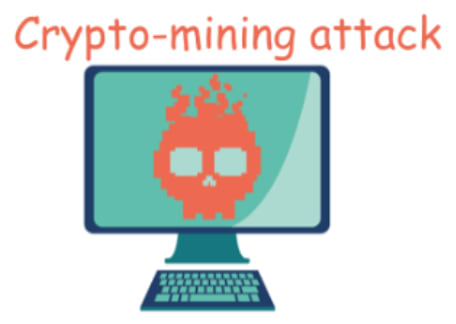 Below, starts the detailed story of the events and my investigation.

Yesterday I was watching an episode of the serie Arrow

It's a serie that contains a lot of everything including hacking sessions that are much much exaggerated and false, but the serie is cool 😃

For the record, Laurel Lance I hate you, Thea Queen you're the best! 💯 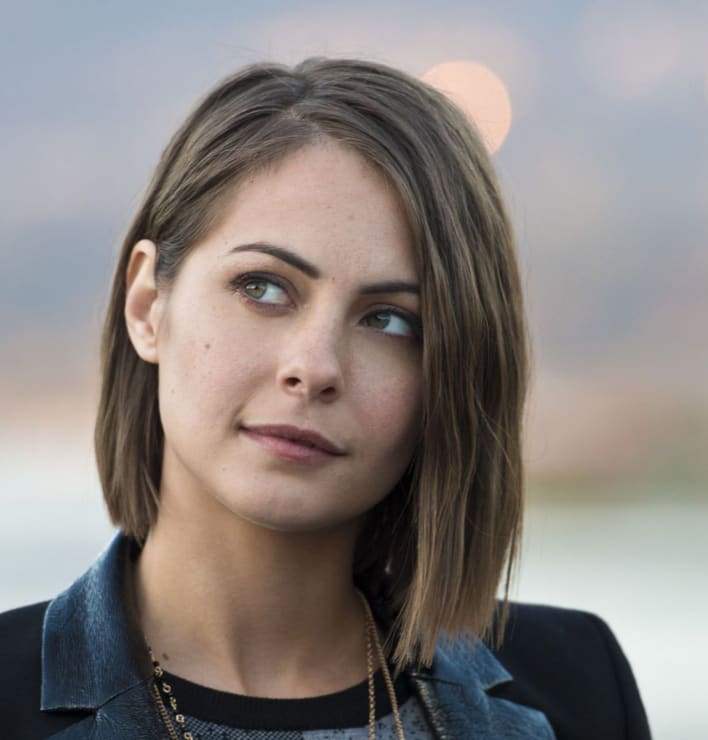 Anyway, during a pause, I looked at devto/hn/linuxfr/github when I saw something that immediately sounded strange...

I got a pull request on a repository where I did not attend any pull requests. I mean, I could receive some, it's open and some parts can be improved for sure, but it was surprising.

First, the repository does not have any "star" ⭐

It's a collection of github actions, circle ci, travis-ci examples for Perl projects. And it's just a complete mess with links to docker images, blog posts, helpers... 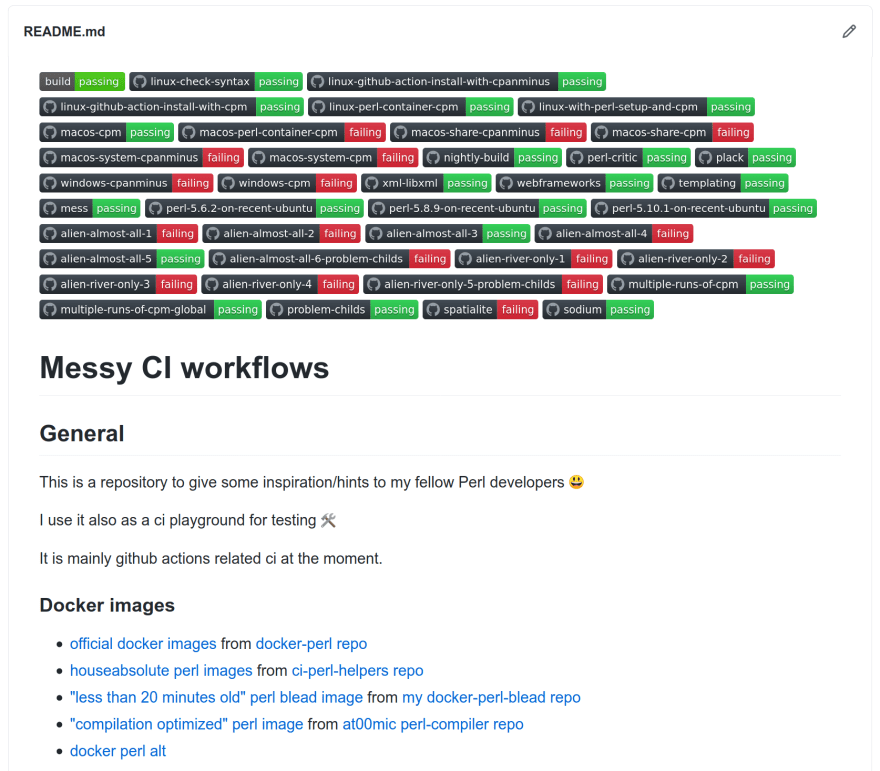 Yes it has a lot of failing actions, but it's on purpose.

This repository does not seems abandoned (a commit 14 days ago from today) and neither is my profile.

It was forked 2 times in the recent 3 days.

So far, you would think I'm too nervous, but really, it smelled strange even before I looked into the Pull Request details. A sort of bad feeling.

Still on my smartphone, I looked at the pull request, it became clear that it was unclear 😀

Here is my notification emails about the PR, usually I should receive only one per opened PR: 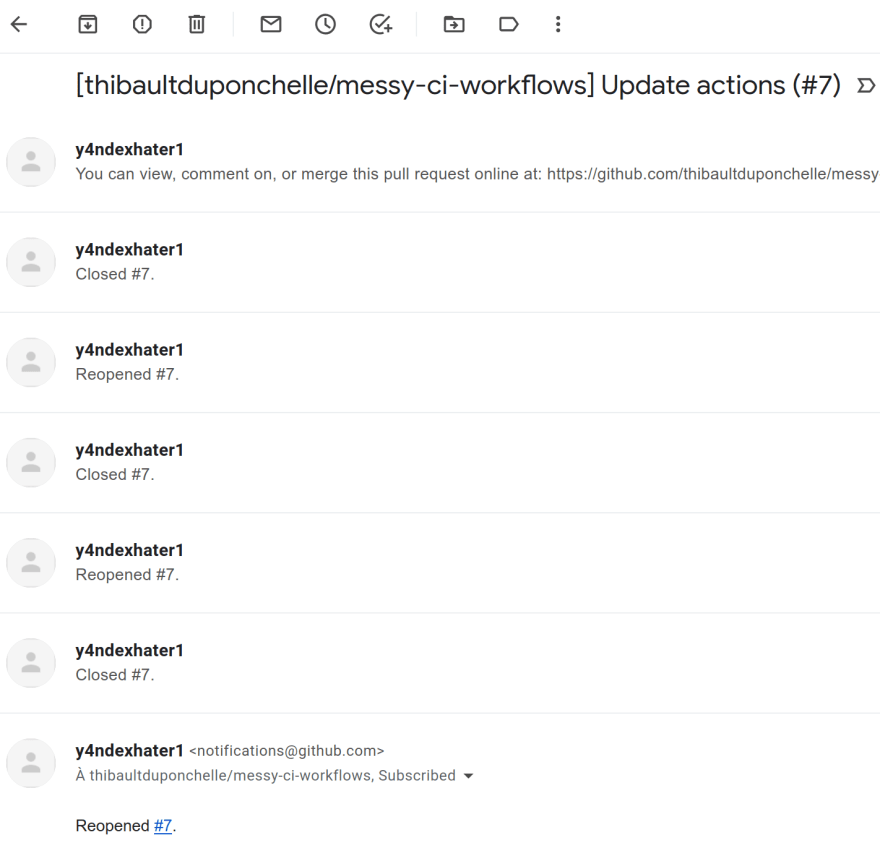 But my mom learned me to never judge people by their appearance so I continued to investigate (but the game was already over 😃).

I then looked as fast as possible at PR content, I was nervous and rushing, I felt like github was too slow to load the page...

As a meaningful contribution I was expecting some typo corrections, or adding more actions to the set.

But instead, all my actions were proposed to deletion and one new called ci.yml was added.

Here is the screenshot (I was still on my smartphone): 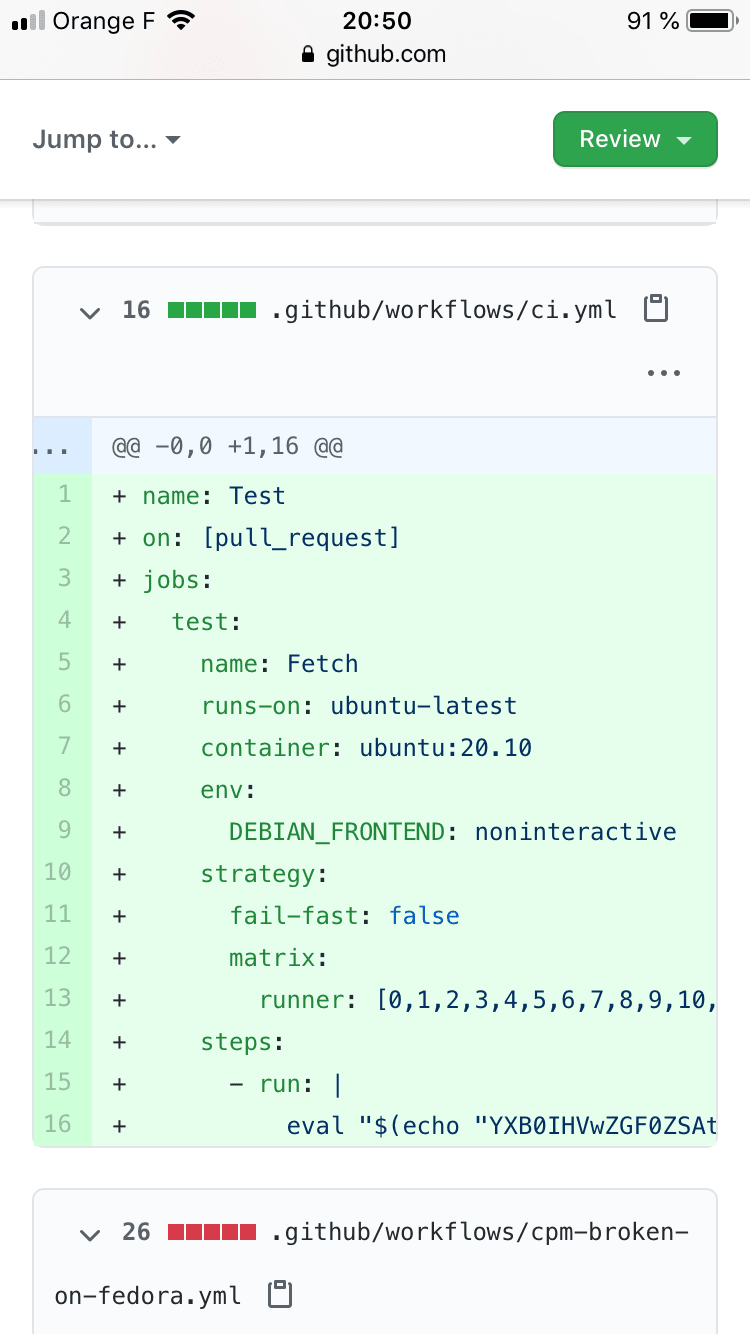 When I saw the eval "$(echo "YXB0IHVwZGF0ZSAt I jumped from my couch while saying:

(I'm not discussing in english with my wife, we are french and we respect the french reputation about bad english, you know...👍)

Especially since each action seemed to start multiple sub-jobs:

When my computer finished to boot, I immediately stopped the jobs and closed the Pull Request.

The obfuscation with base64 encoding is something usual. I played with an obfuscated JAPH in a recent blog post so it took me 1 second to translate it.

With this obfuscation, I knew at this point that there was a backdoor or a mining program behind.

When decoding the thing:

I get the nasty code:

I will not explain the apt lines, we don't care.

The curl lines are more interesting, since it retrieves the prog binary.

From either a github profile (that no longer exists) or a transfer.sh url that maybe still exists.

Then it seems to use an external service to resolve an IP address (the one for poolio.magratmail.xyz).

I think that dns.google is not a nasty domain, but honestly I'm not sure and haven't much investigated this.

Then it executes prog:

A backdoor? A mining program? Something else (a github secret stealer)?

If you read carefully the title of this post, you already know the answer 😃

I downloaded this prog since it was still available (not tested recently) at https://transfer.sh/OSPjK/prog

Except statically linked, no info :/

Alpine? It even does not have the same libc? But ok...

I quickly looked into the file with hexedit.

Then, I thought about trying more options with readelf or objdump (if you know what are the magic commands, please comment!).

I also thought about decompiling it...

Finally, since it's a program that requires arguments to work properly, I had the feeling that I could run it safely by using wrong or no arguments so I could get informations about its nature.

Even with this assumption, I would only execute it in a container, with network disabled and on a computer with no internet access.

While it took me maybe 7 minutes to stop all the jobs and close the pull request, in the 5 minutes that followed, the pull request itself and the user y4ndexhater1 totally disappeared (for your info, it looked an usual profile with projects pinned on the homepage).

EDIT: GitHub support informed me later that the profile and pull request disappearing was triggered by them flagging this user for suspicious activity 😃

Inspecting prog in a container

First I disabled my internet connection.

Then I started a docker container without network:

At this point, I had a "Poor man's Qube OS" 😀 where I can execute prog.

Here I hesitated a bit before running the untrusted binary...

Ok finally I was bold enough to execute the thing and it revealed to be a cryptominer called XMRig:

The XMRig has released 6.8.1 some days ago and it coincides with date reported by ./prog --version.

But I didn't find the match, so maybe it's a modified version of it or it's even not this thing at all...😳

To sleep peacefully, I disabled the github actions on this repository (is there an option to disable for a whole github profile?) 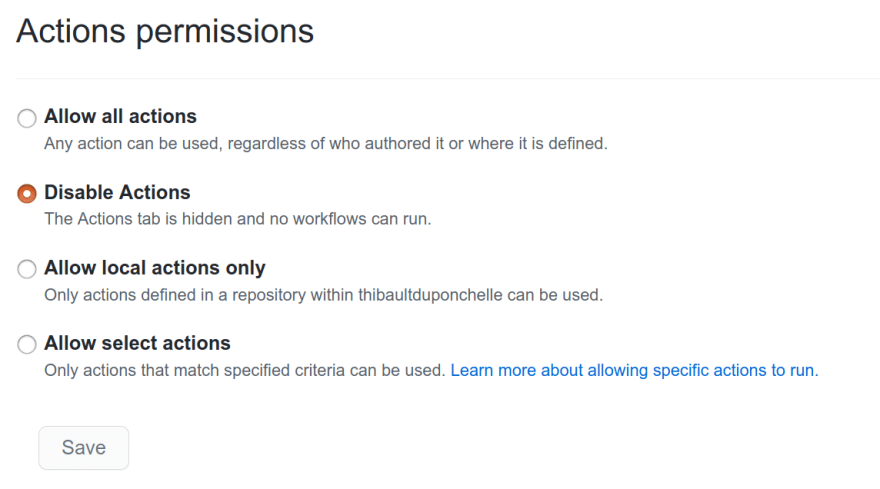 I have to admit, I did no slept peacefully last night. I was a bit anxious (for nothing) about having been infected while inspecting the prog cryptominer 😬 so I'm checking all the time my local system status with netstat and htop. If you, dear reader, are earning money from my computer CPU, please tell me 😁

I found absolutely zero info about this attack, does somebody is aware of this? Am I alone? Is this new?

EDIT1: I reported this to GitHub (through support and communities)

EDIT2: I found this article Massive Cryptomining Campaign Abusing GitHub that describes the same kind of attack with a different implementation.

EDIT3: GitHub support is aware of these kind of attacks and confirmed this writing. They took actions on the hacker's profile and deleted the pull request (what I described in "The hacker's escape")

EDIT4: The story was about to repeat, I noticed a new user "dir99" that forked this repository and was suspicious. So I immediately disabled the actions. The user was almost new, with some repos created one week ago. The majority of repositories have no description neither code (but each time one tarball in release). The user has no followers neither any star on the repo. Some days later, the profile disappeared. This is a screenshot of the profile: 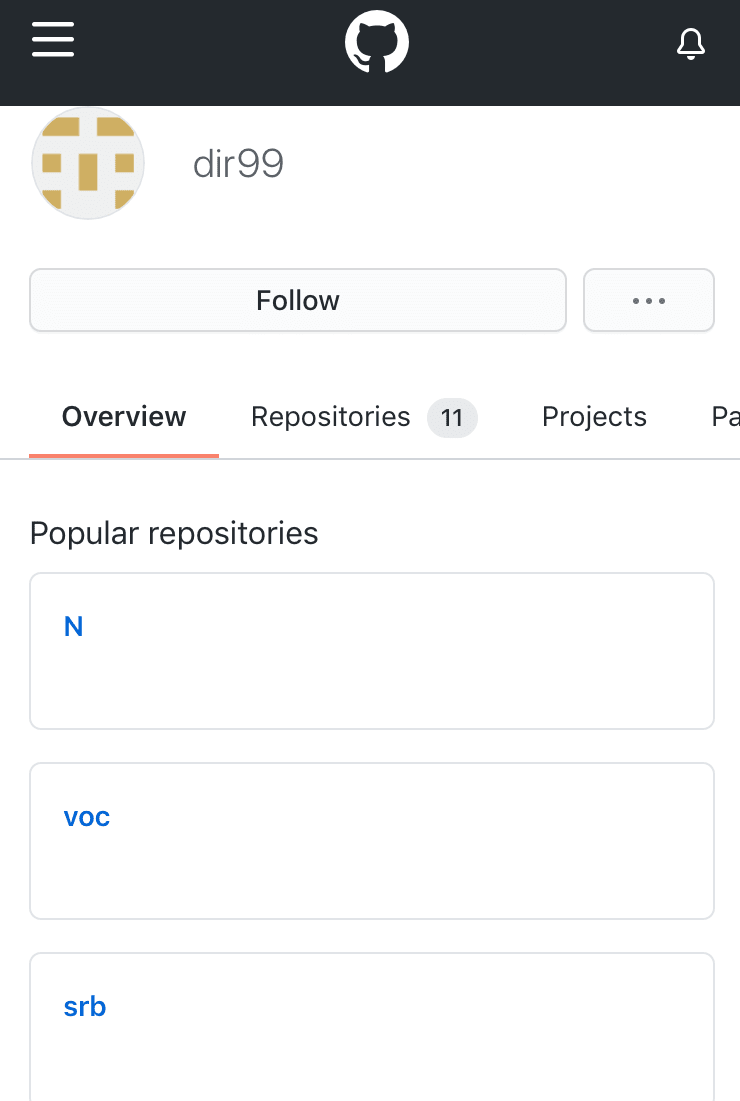 EDIT5: In april 2021, @mihi tested with me how the quota of concurrent running jobs were assignated and the conclusion was: the user who receive the pull request counts as the starting user, not the user whose repo is submitting the pull request see comments below this post and his github community forum entry

EDIT7: June 2021, GitHub infrastructure can (and does) slowdown your scheduled actions without notice (an action scheduled every 20 minutes can run every hours or every 2 hours depending the days)

EDIT8: Queuing actions are now aborted when they are too many in the queue

A Git cheat sheet – $get git