I'm working from home since mid March due to the pandemic. (I'm priviledged enough to have an employer who allows this and made the switch as lean as possible for everyone.) I struggled in the beginning, though, all of a sudden all meetings I had were video calls. In the beginning, my camera didn't even work on Linux (I never had to use it before, so I didn't care), which is why I used my phone to do video calls for the first few days. I improved my setup at home ever since and I'm now at a point where I'm introducing more and more gimmicks and gadgets to it to make my life ever so slightly more convenient.

In this post I'll explain the latest addition to my setup: A hardware mute button for Linux!

Several reasons! First of all, because it's fun. The act of hitting a button before speaking gives me this game show feeling. Building and testing it was also fun, I love to tinker and make things. Furthermore: convenience. Not having to look for, aim and press a mute button on screen, but simply pressing a hardware button feels more convenient to me.

I installed the following things in order for this to work:

If you're a web dev running Linux, chances are you already have these things installed anyways.

For a hardware mute button, I need hardware. Some years ago I ordered a few "big red buttons" by Dream Cheeky: 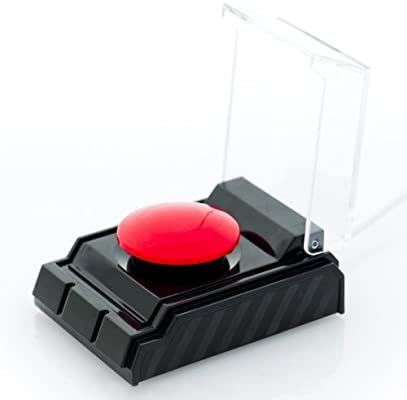 (I'm a bit of a tech hoarder...) But apparently the company doesn't exist anymore, which makes ordering them a bit hard. One can find used ones, though. And since it's USB, basically any button will do. Just make sure that it is pressable and has a USB connector. Search the internet for "big red button USB" and you'll find a myriad of options.

With the hardware ready, I went on to...

Toggling the mic on the CLI

I wasn't very seasoned with pulseaudio. A very Linux-savy friend of mine pointed me to a post on AskUbuntu from where I copied this command and put it in a file called mictoggle.sh:

This toggles the mic's mute/unmute state when executed by listing all audio sources, extracting their index and calling pactl with the command set-source-mute on them. Now I needed to hook that up to the USB button.

I found a library that more or less did what I wanted, but had a few drawbacks since it used a state machine in the back (only one press was recognized, then I had to close and open the button's cover for it to recognize the next press), crashed when the button was disconnected and didn't recognize the button when newly connected while the script was running. So I drew some inspiration and the USB interface handling from this.

Now I needed to figure out the button's VendorID and ProductID in order to connect to the right interface. Usually, with enough digging through existing libs and tutorials you can find those for your product, but a USB dump when connected can also yield the necessary info. For the Dream Cheeky button, those are 0x1d34 (vendor) and 0x000d (product).

First, I wrote a function to fetch the button with these two IDs:

Next, I get the button's interface, detach it from the kernel driver if necessary and claim it for this process. This I do in a function called getInterface:

In order to fetch the state correctly, I needed some magic numbers:

Those magic numbers are parameters for the underlying libusb_control_transfer call which is one of two kinds of data exchanges USB can do (the other being a a functional data exchange). Convenient enough, the library I mentioned earlier had those already figured out via a USB dump.

I was now able to use those functions to listen to what was happening on the button:

I used this code to test if it was working at all:

So, every 15ms, the button is asked for its state which is then printed on stdout, like this (shortened version):

Now I had an importable lib to use together with the mic toggle script. Since it tries to claim the button every time and just swallows any errors, disconnecting and reconnecting the button works like a charm.

Now I only needed to glue the pieces together:

(The XDG_RUNTIME_DIR env variable is necessary to execute pulseaudio commands in a non-interactive shell. During testing, it wasn't working until I figured this out.)

Make it a service

To make the mute button work on startup, I created a service file under /lib/systemd/system with this content:

(Simply adjust the ExecStart paths and replace USER with your users name.)

I didn't know much about USB and libusb before this little side project, but I learned a lot in the process. This thing has once again proved that "searching the internet" and "just trying things until it works" make for some great teachers.

Video calls became a lot more fun since I installed this button and I'm now actually looking forward to more video calls and hitting the button. Just like in game shows!

I hope you enjoyed reading this article! If so, leave a ❤️ or a 🦄! I write tech articles in my free time and like to drink coffee every once in a while.

If you want to support my efforts, please consider buying me a coffee ☕ or follow me on Twitter 🐦!

Once suspended, thormeier will not be able to comment or publish posts until their suspension is removed.

Once unsuspended, thormeier will be able to comment and publish posts again.

Once unpublished, all posts by thormeier will become hidden and only accessible to themselves.

If thormeier is not suspended, they can still re-publish their posts from their dashboard.

Once unpublished, this post will become invisible to the public and only accessible to Pascal Thormeier.

Thanks for keeping DEV Community 👩‍💻👨‍💻 safe. Here is what you can do to flag thormeier:

Unflagging thormeier will restore default visibility to their posts.